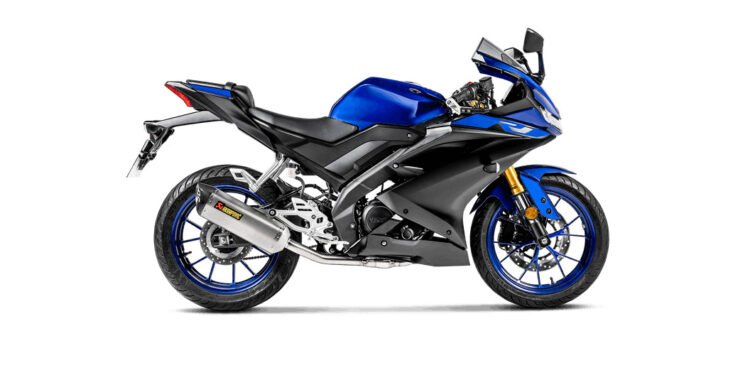 Yamaha’s YZF-R15 is an entry-level sports motorcycle that caters for new riders or commuters. It competes with many motorcycles including Honda’s CBR150 and Suzuki GSX150R. 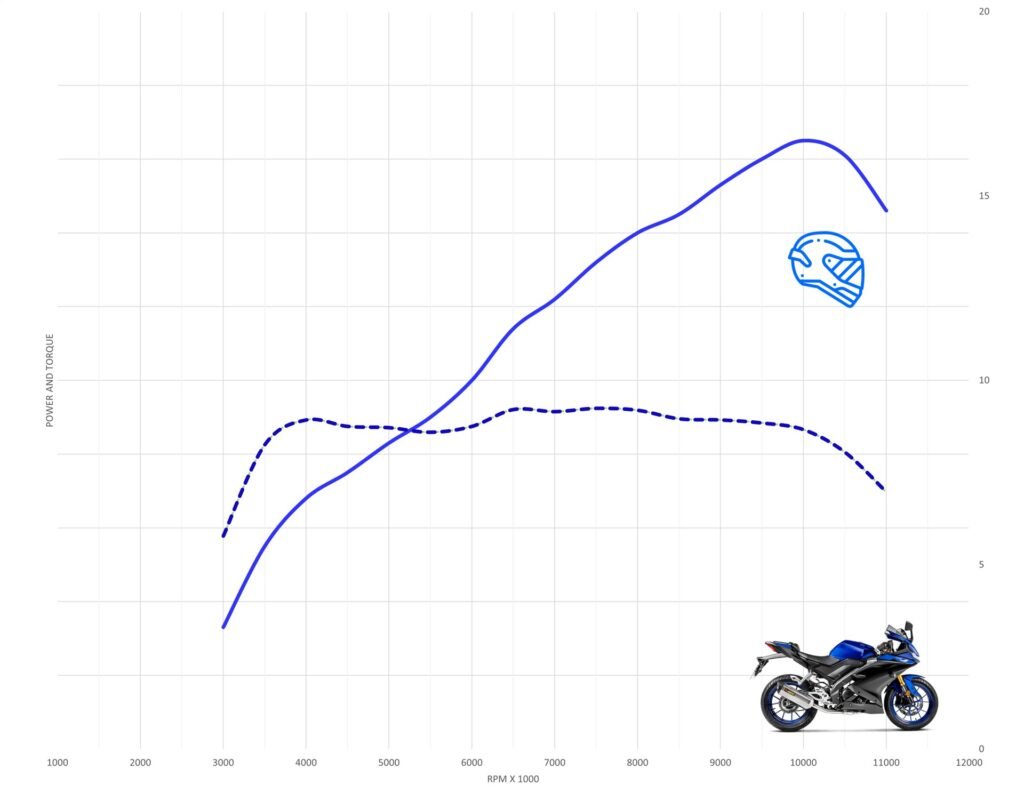 Yamaha’s R15 is powered by a new variable valve actuated (VVA) engine that displaces 155cc and is a single cylinder, SOHC with four valves. It’s a weird engine size that sits in between the 125 cc and 250 cc segments though is a capacity that has become more popular in recent years.

This equates to 16 horsepower and a little over 9ft/lb that is spread between 6500 rpm and 8000 rpm measured at the rear wheels.

The spread in power and torque is pretty good and with a decent amount of torque from as little as 4000 rpm where it does dip fractionally until it picks up again at 6000 rpm. It then revs cleanly to 10000 rpm plus. 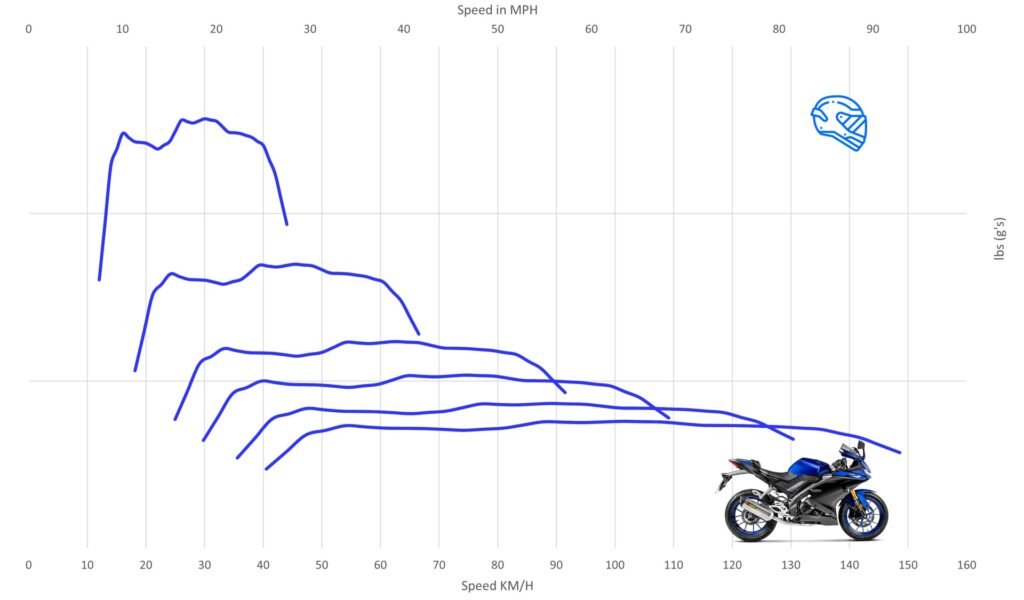 This little flat spot that shows on the dyno is not noticed on the road, instead, the power curve from 4000 rpm upward feels very flat and linear.

There really is not a powerband as such, though like all small engines you do have to constantly work the gearbox. I think Yamaha’s tricky little VVA system does benefit here as that torque at 4000 rpm is only a couple of percent off peak which is impressive.

At speeds below 50 mph/ 80 km/h, you can afford to run in a gear higher but do not expect acceleration to be optimal, but it will pull better than many similar capacity engines making comparable power and torque.

Regardless of the speed or gear you are in, for best acceleration you really should have your rpm at 6000 rpm at least. Any lower and you should be looking to drop a gear. 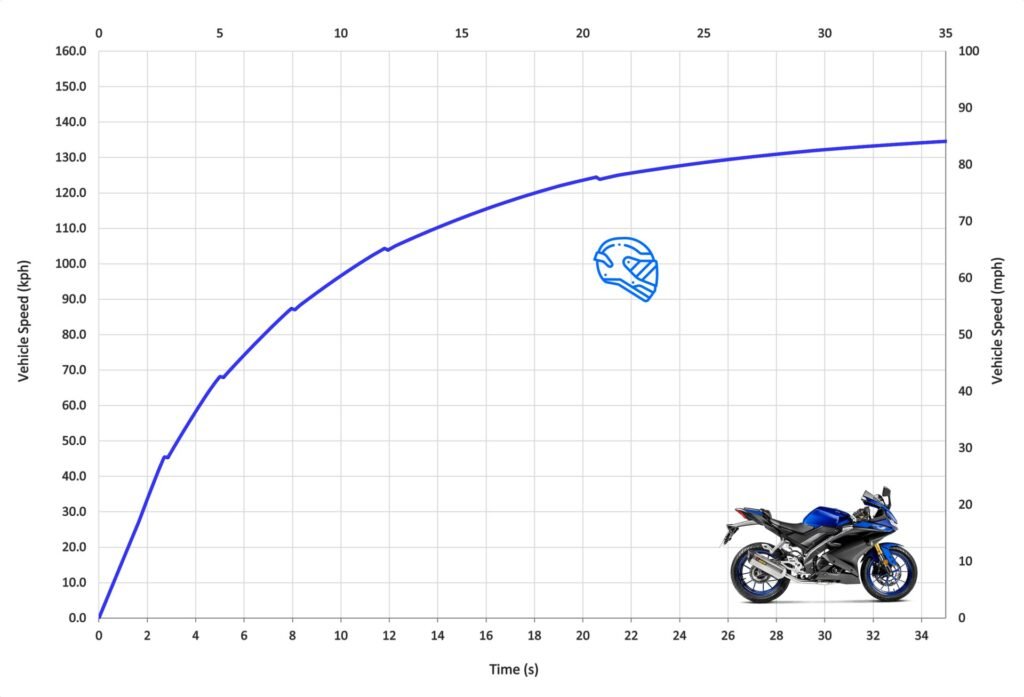 It’s always fun testing lower power bikes, as to get the best out of them you have to really be aggressive as well as hone in your best Moto3 racer tuck.

With only 16 horsepower it is important that conditions are good, and it really helps if you are a lightweight jockey. A 20 kg rider weight difference can mean 0.3 seconds slower to 60 mph. Equally a strong headwind can really eat into the performance.

The R15 is small but offers surprisingly good cover from the elements, and is much better than the previous model.

Getting the Yamaha R15 off the line is not hard. You do not have to worry about wheelies in the usual sense or wheelspin, but it is possible to wheelie.

As to launch these lower-power motorcycles effectively and get the best out of them you have to aggressively dump the clutch instead of slipping gradually like you would on a more powerful motorcycle.

The best technique is to release the clutch quickly but at around 90% fully engaged, then just as the R15 launches forward you slip the remaining 10%.

This will stop the wheelie that would otherwise happen from 0 mph. The best rpm is around 6000-7000 rpm. This technique will get you the fastest 0-20 mph.

Motorcycles under 200 cc are better measured from 0-50 mph (80 km/h) as that’s the speed (and under) where they normally live.

While the Yamaha R15 will accelerate from 60 mph it is certainly not where it shines as documented by it 17.62 second quarter mile time. Equally, the 60-70 mph time takes 4.9 seconds.

The Yamaha R15 will happily sit at 70 mph highway speeds but overtaking will be quite the challenge, especially on an incline or into a headwind as even in good conditions the Yamaha R15 managed a top speed of 86.37 mph.

This did not come easy and required a full race tuck. If you are sitting normally expect around 80 mph. With a smaller rider, 90 mph could be possible.