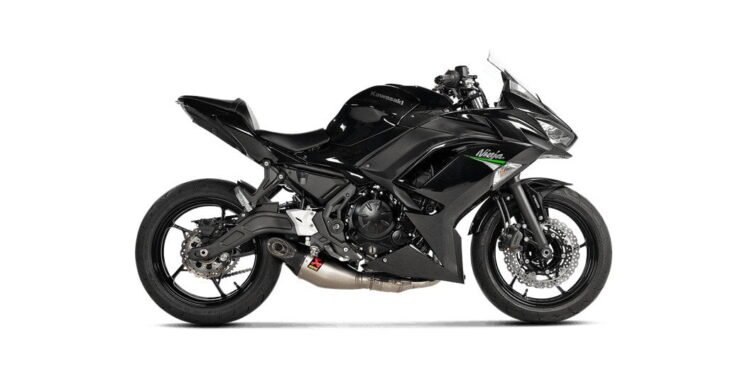 Kawasaki’s Ninja 650 has been around for a while now in various forms for quite a few years now and is also known as the Kawasaki ER6.

The engine also has to be one of the most used engines on the road as it powers many motorcycles in its various incarnations currently and over the years.

Kawasaki seems to have the entry-level motorcycle class completely covered at all engine sizes with the Ninja 250, Ninja 300, and Ninja 400, as well as the naked counterparts and the many other offerings over the years.

Powered by the very popular parallel two-cylinder configuration which is an engine that seems to be used in very many entry-level motorcycles.

Parallel two-cylinder engines are just simply very reliable and cheap to produce which no doubt makes them favorable engine choices for manufacturers and they’re many lower to mid-sized motorcycle offerings.

Parallel twins have L-twin-like easy power and torque deliveries but arguably minus the nice sound of any 90-degree twin-cylinder engine.

As a result, the Kawasaki Ninja 650 is not the nicest-sounding machine out there.

The latest Ninja 650 goes up against many class alternatives including Kawasaki’s very own Ninja 400, as well as the MT-07, SV650, and the class performance leader the Honda CBR650R.

There are also many other motorcycles current and discontinued that the Ninja 650 must compete with.

How does the Ninja 650 compare to the other competitors we have already tested? 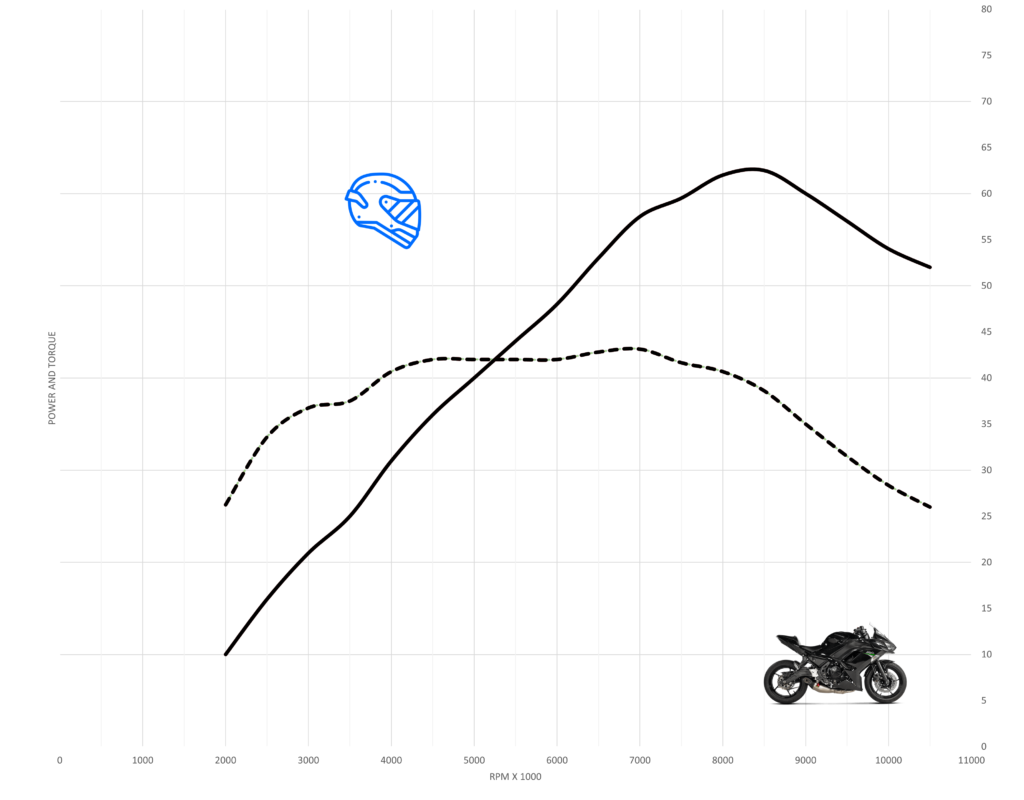 The Ninja 650’s 62 hp at the wheels is kind of what is to be expected in the class and at this engine size and configuration.

The higher rpm where the peak torque is produced relative to where peak power is produced might make some people assume that this is a peaky engine.

But the Kawasaki Ninja 650 produces very close to peak torque from only 4000 rpm with a nice flat curve until where peak torque is produced.

Though if looking at Aprilia’s new RS660, it really does show us what can be done with this configuration and engine size.

To be fair on Kawasaki Ninja 650, the Aprilia RS 660 is totally new, and is almost twice the price!

The Kawasaki Ninja 650 is an entry-level sportbike while the Aprilia RS 660 is more focused and will likely go up against and be compared to four-cylinder Supersports bikes seeing as the Aprilia makes similar power.

Kawasaki has made incremental improvements and the latest version of the engine makes a little more power at peak and has a better spread of power and torque than previous versions of this engine.

The Ninja 650 actually has a very good engine and is exactly what you need on the road!

It has the power and acceleration where your tachometer needle mostly lives, which is the bottom and middle half of the rpm range.

The engine offers plenty of instant drive from as little as 2500 rpm.

There is a little flat spot around 3500 rpm but is barely noticeable on the road.

From there on and up until around 7000 rpm you have very similar engine performance to the Suzuki SV650  which we tested only recently. 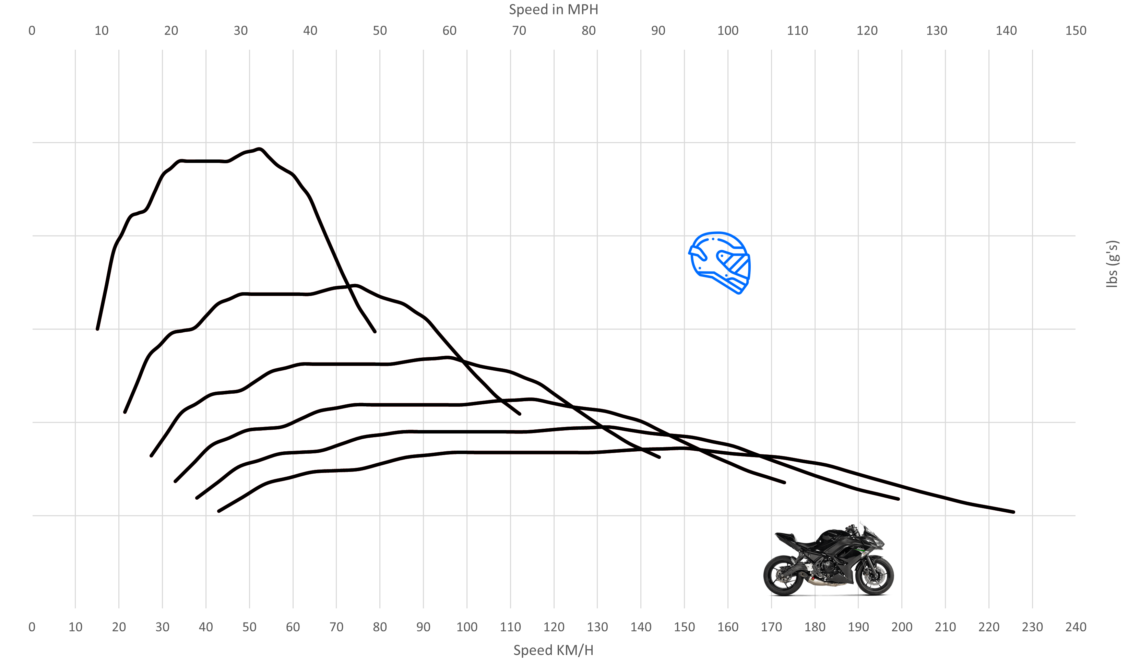 While the Ninja 650 will rev beyond 9000 rpm it seems that the sweet spot is most definitely between 4-9000 rpm which is where it delivers the best acceleration.

Revving beyond that it’s just making noise, and not really the nicest noise either so it’s a sure sign that you should hook the next gear and bring that tacho back into where it’s making good thrust.

It’s a good engine and pretty similar in character to the MT-07/YZF-R7 but just less power and torque everywhere and none of the attitude or wheelies.

Also, the Yamaha MT-07 despite also being a parallel two-cylinder engine sounds much better due to Yamaha’s crossplane crankshaft as does the new YZF-R7.

The engine is fantastic in town and when riding on slower roads. It has all the grunt you will need that is delivered with very little drama.

You can afford to run higher gears and let the rpm drop pretty low and the grunty Kawasaki Ninja 650 provides more than enough performance to get the job done.

While something like CBR650R is faster at lower speeds and lower rpm in all gears the Kawasaki Ninja 650 is actually a little more accelerative. Particularly in the first three gears.

The engine does a stellar job on the road though and is fast enough to have fun.

The Kawasaki Ninja 650 can move, as any vehicle that can do a sub-four-second time from 0-60 mph is objectively fast.

That number is pretty wild for an entry-level sporty motorcycle that will tour in comfort too.

These are close to optimum times.

The average rider who is decently skilled will be hitting 4 seconds flat to 60 mph and be mid to high twelves on the quarter mile with a terminal of around 105 mph.

When we go for it on a motorcycle it is always tempting to take the rpm’s right to the redline.

But this is not always the fastest way, nor the best way to achieve effective elapsed times as it all depends on the engine delivery characteristics and gear ratios.

The Ninja 650 is a motorcycle best short-shifted to make efficient progress. Shifting at around 8500-9000 rpm is the most effective way to get good times.

If you scream the engine to the redline for each gear you could lose up to 0.3-4 in the quarter mile.

Riding the Ninja 650 a little bit more like a ‘revvy’ single is how this engine likes to play ball and will reward you as a result.

As the Ninja 650 is fully faired, despite being a little down on power compared to some of its rivals it still manages to achieve a decent top speed of 130 mph, elbows in, and full-on race tuck.

For most average-size and weight riders that are less committed, this number would be closer to 120/125 mph. Factor in a headwind and you’ll struggle to do 110/115 mph.

While this bike is quick its engine is clearly more suited to bursts of acceleration in-gear and at lower speeds rather than screaming her like a two-stroke.

You can play with your other classmates and be on their heels, but the Ninja will show its weakness as the speeds go above 100 mph.

If we compare the Ninja 650 to sports cars it has many of them beat, and its acceleration to 100 mph is like that of a BMW M2 or M4.

So, you can be happy knowing that your Ninja can play with cars many times more expensive.

If we exclude the ZX-6R, the Ninja 650 is the quickest entry-level motorcycle that Kawasaki offer and it does also have the legs of the more rev-hungry and smaller Ninja 400 sibling.

The Ninja 650 will also convincingly put the ‘beatdown’ on the CBR500 and Yamaha R3.

If you do not like the full fairing the Z650 is the naked version.

The MT-07, CBR650R, and SV650 offer better straight-line performance though. 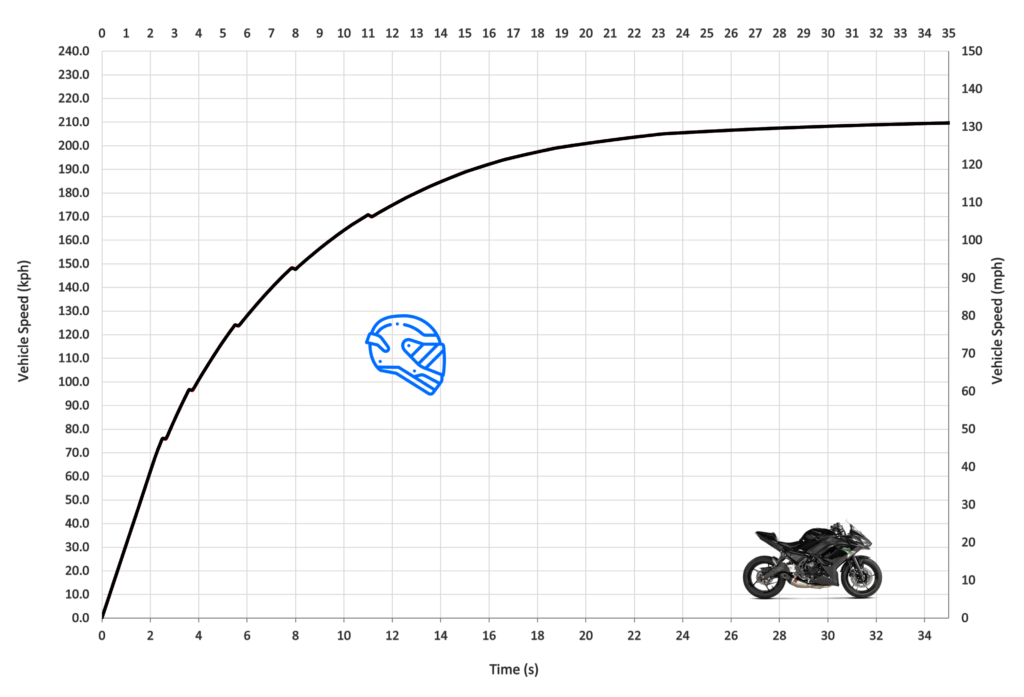