The Ducati Panigale 1199 replaced the Ducati 1198 in 2012 and at the time of release was the most powerful mass produced Ducati ever to come off of the production line. Below  we have top speed and acceleration data through the gears accompanied with Dyno Curve and Thrust Curve graphs. 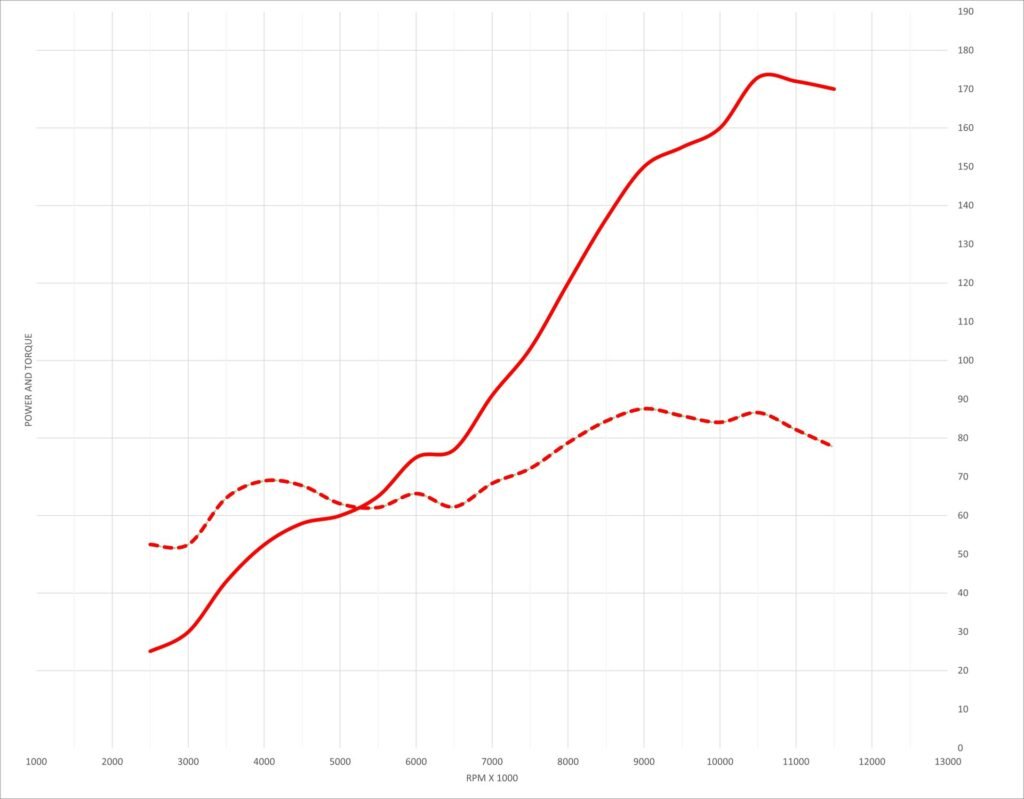 The engine in the Panigale 1199 was at the time the most powerful production two-cylinder engine in existence. On paper, it made a claimed 195 horsepower and 97 ft/lb which to this day is a mesmerizing figure for such a lightweight motorcycle at 166 kg dry.

On the dyno and with the expected transmission losses the Panigale 1199 produces 173 horsepower at 10500 rpm and 87 ft/lb at 9000 rpm. These are huge numbers that improve upon the outgoing Ducati 1198 by a good margin.

The engine’s delivery and character are not typical of a powerful two-cylinder engine, with most of the available drive provided at higher rpm.

The Panigale 1199 engine is actually ‘peaky’ and has an almost two-stroke-like character with a gaping hole or flat spot in the curve between 4500 rpm and 6500 rpm. This flat spot is particularly noticeable in the higher gear ratios as they are longer than your typical Japanese four-cylinder 1000 cc Superbike.

There are various reasons for the flat spot including noise and emissions regulations but primarily it lies with Ducati’s choice to aim for class-leading peak power which meant that the new Panigale’s engine designers chose a very oversquare short-stroke engine design versus the typical long-stroke design we often see in big two-cylinder engines.

From 6500 rpm onward the Panigale’s engine explodes excessively and drives extremely hard all the way to the redline.

It is overly exciting and rewarding to feed the Ducati gears, but you better hold on tight and have good throttle control as the Panigale does like to lift the front wheel which it does with very little invitation.

The engine is typically ‘chuggy’ below 3500 rpm and certainly prefers to be at higher rpm but again in that flat spot, it is not happy either because there is not the kind of acceleration one would expect from a large capacity Superbike engine.

But much of the flat spot can be remedied with a full exhaust system and ECU flash though even then the engine still thrives on rpm where it is most effective. 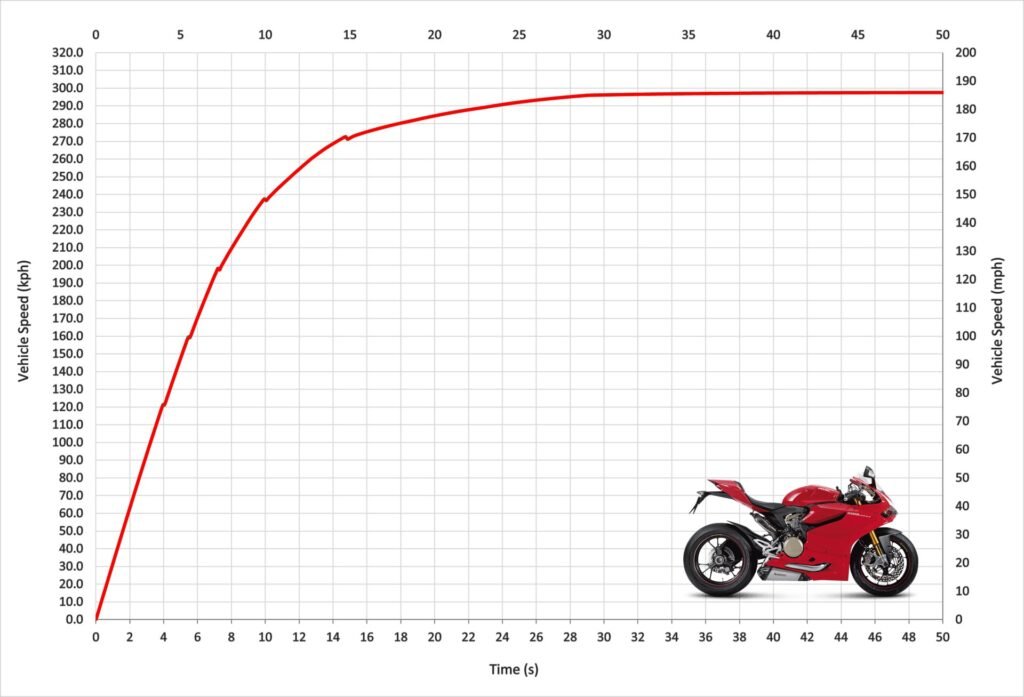 Ducati Panigale 1199 Acceleration through the gears

The Ducati Panigale 1199 was one of the fastest accelerating motorcycles when released back in 2012.

Still to this day, it holds its own against many newer and more powerful motorcycles. Like all powerful and lightweight superbikes wheelies are a limiting factor to achieving optimum times and the Panigale 1199 is probably hindered more so than most even though it is accompanied by a suite of various rider aids such as wheelie control.

Sub ten-second times are possible like with many Superbikes but the stars need to align.

The Panigale 1199 charges really hard up to around 170 mph but does relent a little from then on once sixth gear is engaged compared to other litrebikes, with the 0-180 mph time being 23.24 seconds which is actually a little slower than the less powerful K5 Suzuki GSX-R1000.

With more power, there is enough rpm to hit a real 195 mph but would only be possible with a better screen and with a good full system and tune.