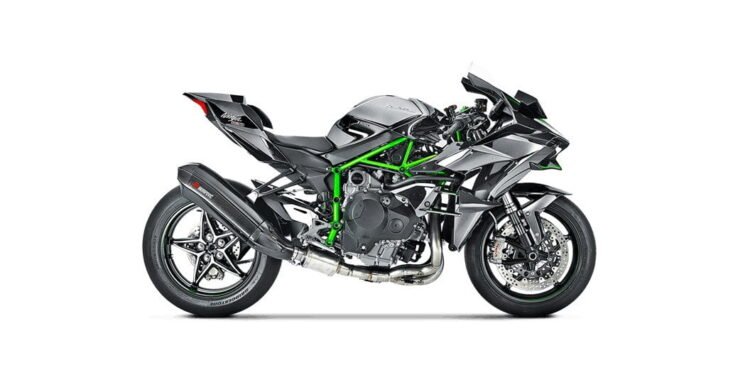 The H2R is still the fastest-accelerating Motorcycle in the world

The Kawasaki H2R is no stranger to the motoring world.

Its launch back in 2015 came as a big surprise because we all thought that we had moved on from the Hyperbike top-speed war when manufacturers agreed to limit motorcycles to 300 km/h.

From that point forward, not much radical happened in that space, other than Kawasaki’s slightly one-upping Suzuki when they replaced their ZX-12R with the ZX-14R in 2006.

Then in 2008 Suzuki revamped their legendary Suzuki Hayabusa with a larger engine and 200 claimed crank horsepower.

Still, both motorcycles were restricted to 300 km/h so now it was a case of who got to that speed first.

Arguably stock for stock both variants of the ZX-14R probably had the slight edge outright but that comparison is for another day.

Kawasaki having a ‘slight’ edge was not enough, or maybe it was, either way, Kawasaki kind of went Left-field and with the full might and prowess of Kawasaki Heavy Industries…

We got gifted the Kawasaki H2R quite unexpectedly.

What was very unexpected about the H2R was its crazy claimed power of 300 plus horsepower, as well as it being a Supercharged motorcycle which surprised everyone.

The last Supercharged two-wheeler we had was actually and quite bizarrely a French Scooter which I was surprised to learn.

The Peugeot JetForce from way back in 2002 is the scooter in question. It’s powered by 125 cc 4-stroke scooter with a Supercharger, bonkers hey!

It wasn’t that fast despite the power of a 250 cc scooter and was heavier than a typical 125 cc scooter too.

Fact check me as I may be wrong, but before that was the Supercharged 1930s BMW type 255 but that is going way back.

Litre bikes do not need superchargers they are fast enough you say, but Kawasaki had other ideas of course. 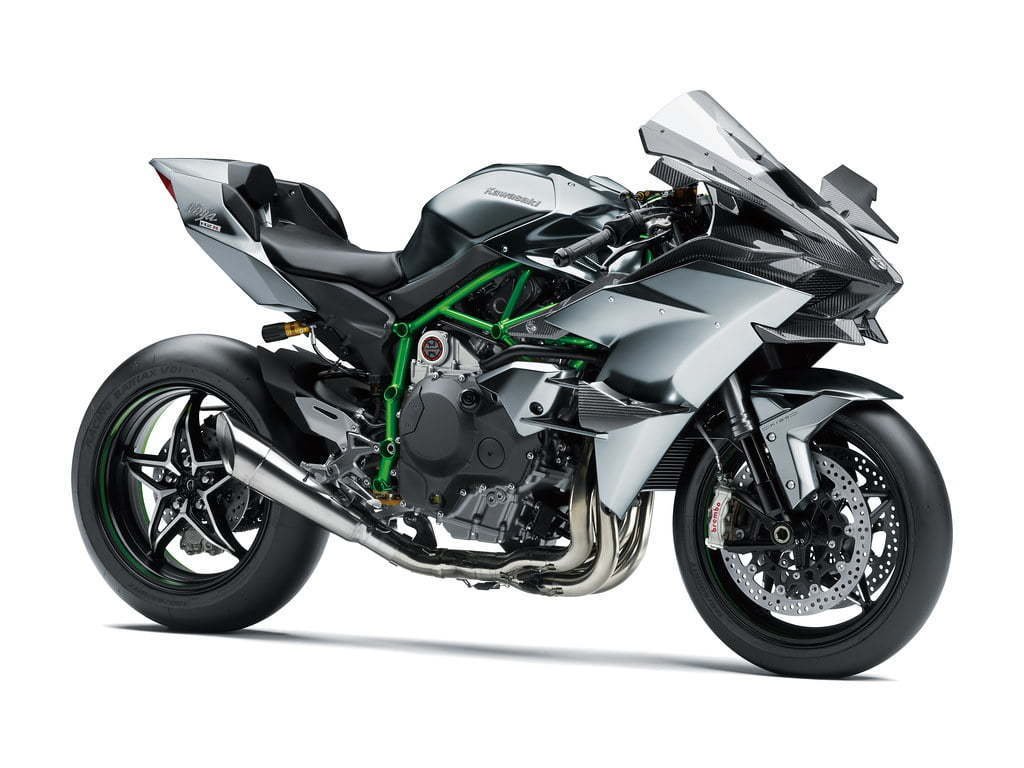 It would not be hard in most markets to modify an H2R to make road legal as you could simply borrow parts from the road version – yep did not mention that.

Kawasaki also made a road-legal version too with 200 hp and named it the Kawasaki H2.

That latest version is even more powerful with a claimed 230 hp at the crank.

If you want H2R power and madness legally on the road, it makes much more sense to buy a regular Kawasaki H2 for less than half the price and make it H2R power rather than buying the H2R.

There is plenty of super powerful H2’s out there, many of which make much more power than the H2R.

Here are some of the popular builds below, all making close to or more than 300 horsepower at the wheels and are real 400 km/h / 248 mph motorcycles given a long enough stretch of tarmac.

How fast is a Kawasaki H2R? 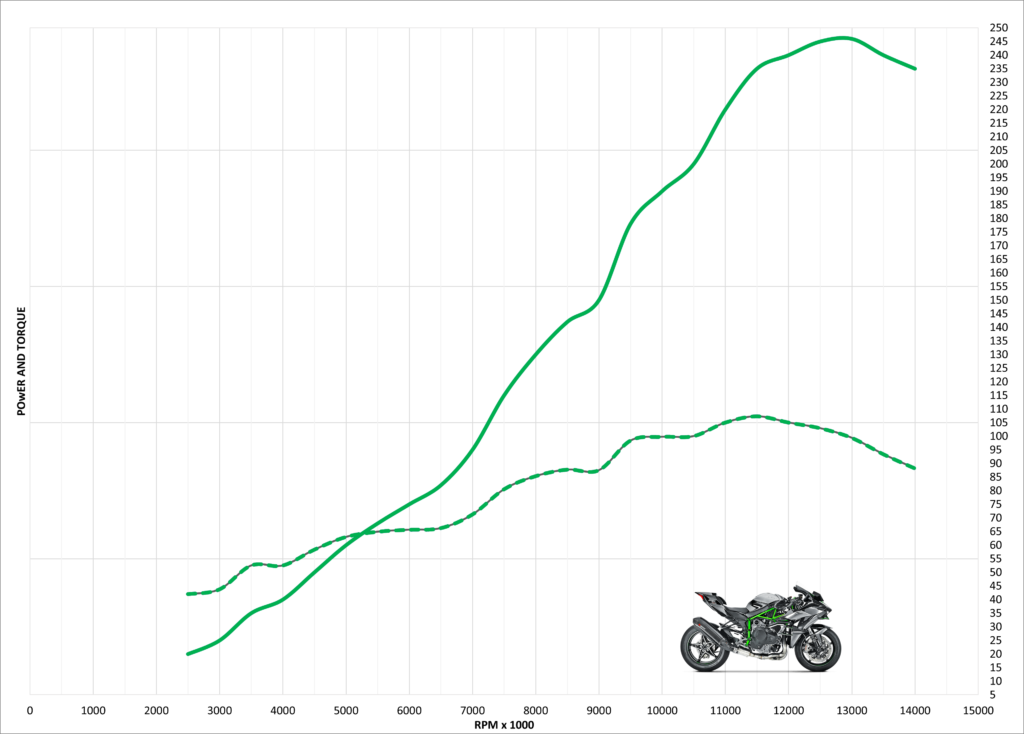 Despite the 310 and 326 (with ram air) metric hp plus claims at the crank, the Kawasaki H2R generally produces between 230-240 horsepower at the wheels on a Dynojet Dynamometer.

Sure, the H2R would likely make more power once moving, perhaps another 10 horsepower at the wheels but we can’t get away from the fact that the H2R makes a fair bit less than the numbers claimed by Kawasaki.

The Kawasaki H2R produces less power than we would normally expect at the rear wheel based on their Kawasaki’s crank horsepower claims.

Typically, a motorcycle engine will lose around 10% through transmission losses from the crank to the rear wheel suggesting that the H2R if it made 310-326 hp at the crank should kick out around 280-290 horsepower at the rear wheels.

But we just do not see these numbers anywhere.

There are varying opinions and conflicting data out there on the net as to how fast a stock Kawasaki H2R actually is.

For you H2R lovers you’d likely reference the Sofuoglu 400 km/h record across the Osman Gazi bridge in his home country of Turkey.

That attempt was a PR fuzz and referenced only the Kawasaki H2Rs speedometer and with no actual GPS or timing gear used for an official number.

Motorcycle speedometers are horrendous and over-read by as much as 12%. This is often a design feature and not a flaw.

Besides, it looks good when telling your friends at the motorcycle meet. 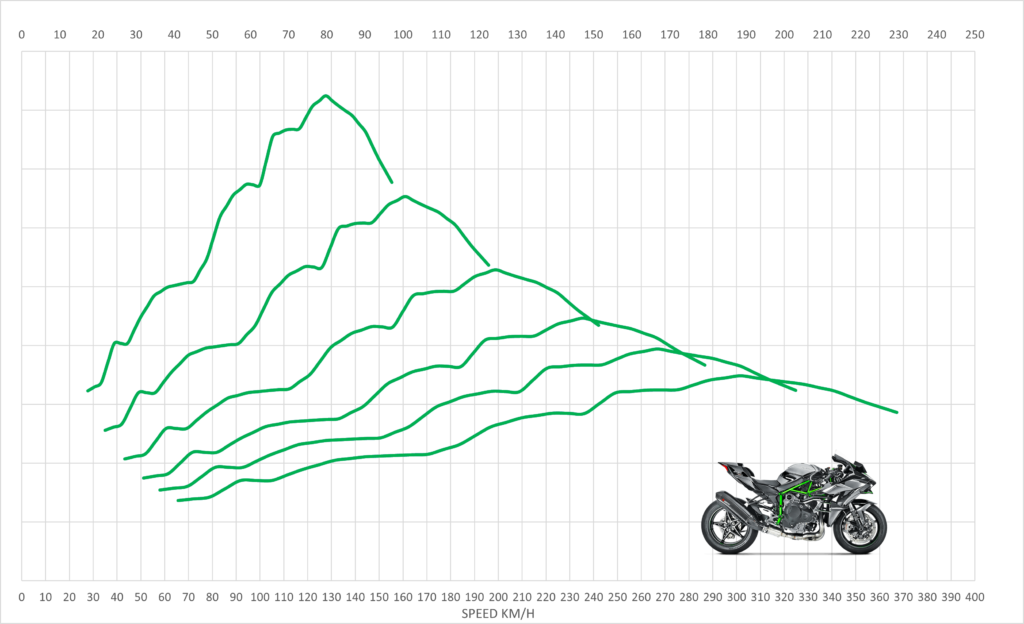 While I do not know for sure given it was a PR exercise it would not be unreasonable to believe that also that particular H2R was likely fettled and more powerful than a stock bike.

On a static dyno, the H2R holds onto its power till around 13,000 rpm only and starts to tail off.

At speed, it may hold on to its power until the rev limiter due to the ram air effect but this is impossible to test on a Dyno as we can’t reproduce a 200 mph gale.

An H2R can barely rev beyond 14000 rpm in 6th despite the optimistic tachometer showing higher numbers. 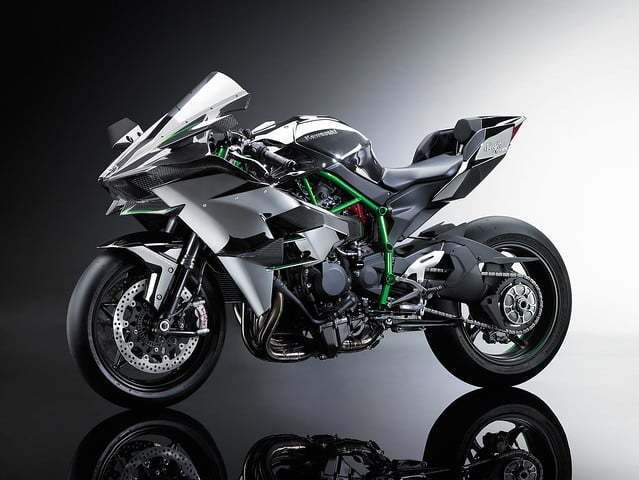 Kevin Cameron of Cycleworld magazine once said that the H2R with the right gearing could theoretically hit 400 km/h plus.

All due respect to him but he was wrong, though likely he was basing that opinion off Kawasaki’s 326 hp claim at the crank with ram air.

Which if true would mean 290 hp at the wheels if taking into consideration the typical 10% transmission power losses.

A 290 hp bike even one with elephant aerodynamics like a Kawasaki H2R could possibly muscle its way to 400 km/h for sure, but not an H2R with 230-240 hp at the wheels.

So, he was right in saying ‘theoretically possible’ just that the H2R didn’t produce anywhere near the power he based his opinion on.

Even if the H2R makes less peak power than claimed, it is no doubt a ballistic motorcycle and is untouched by any other production motorcycle!!

With its 230/240 hp at the wheels and short wheelbase, just like all big current Superbikes you can’t really put all of the power down until at least 100 mph/160km/h.

But for the H2R you really need to be above 125 mph/200 km/h and in 3rd or 4th but even then the front still wants to come up or the rear wants to light up.

Off the line, the H2R is not that much faster than your average litre bike.

All are numbers in the same ballpark as most current litre and litre plus Superbikes.

Wheelie and traction control only really hinder the H2R’s momentum with the best results being with it all off and a skilful hand.

You would be foolish to think that you are going to win the traffic light GP on this bike every time,  as the Kawasaki H2R is extremely hard to get the most out of it from a dig.

Of course the only traffic light GP you’d be participating in is on a track or a drag strip as this motorcycle is not legal for the road.

What you need is the highway or a long runway for the H2R to assert its dominance over other motorcycles.

Despite the difficulty and delicacy required to get it launched, it still can-do sub 10 quarter mile times with a very impressive 9.64 seconds at 164 mph.

The majority of my runs were a mess of wheelies and mid-tens at 150 plus mph.

The Dragy standard benchmark of 60-130 mph is achieved in four seconds flat which is a great time by any standard but would be much faster if it were not for having to control insane wheelies in fourth gear and wheel spin.

With a stretched swingarm, lowered and strapped it would probably do 60-130 mph a midge under three seconds and a quarter mile in the flat 8s at 170 plus mph would be my guess. 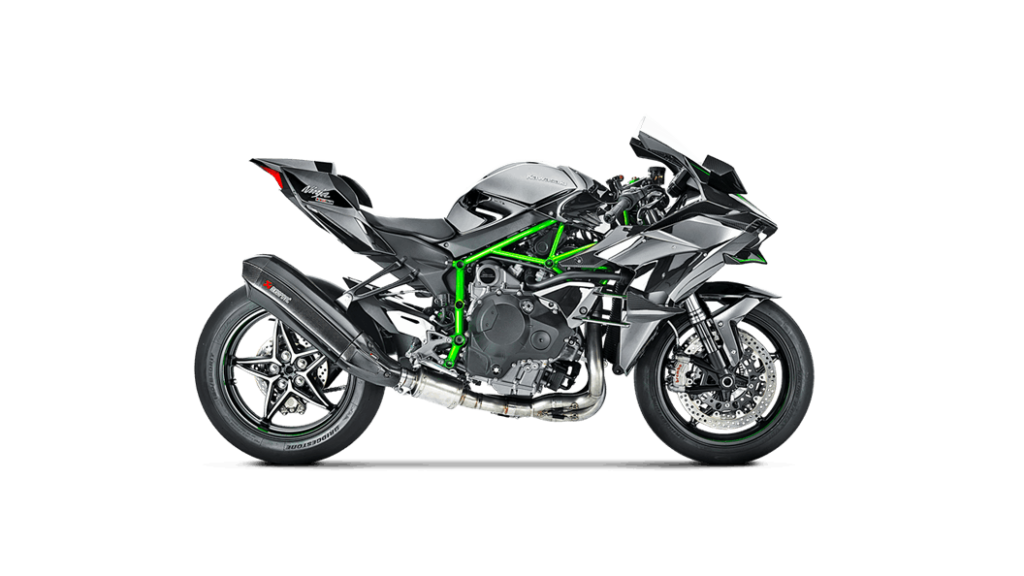 For comparison, your fastest litre motorcycle such as the Yamaha R1 will get to 180 mph from a standing start in around 15-22 seconds depending on the bike.

Most modern litrebikes can also nudge just under 10 for the quarter mile albeit with a 15-20 mph lower terminal speed than a Kawasaki H2R.

Here is an S1000RR for reference. A motorcycle that needs no introduction

That is a long way from 400 km/h, a number that was never real in the first place.

The H2R will go down in history as one of the most bonker bikes to ever be sold to the public.

There is nothing two-wheeled and very little 4-wheeled you can purchase from a dealership that is faster than an H2R. 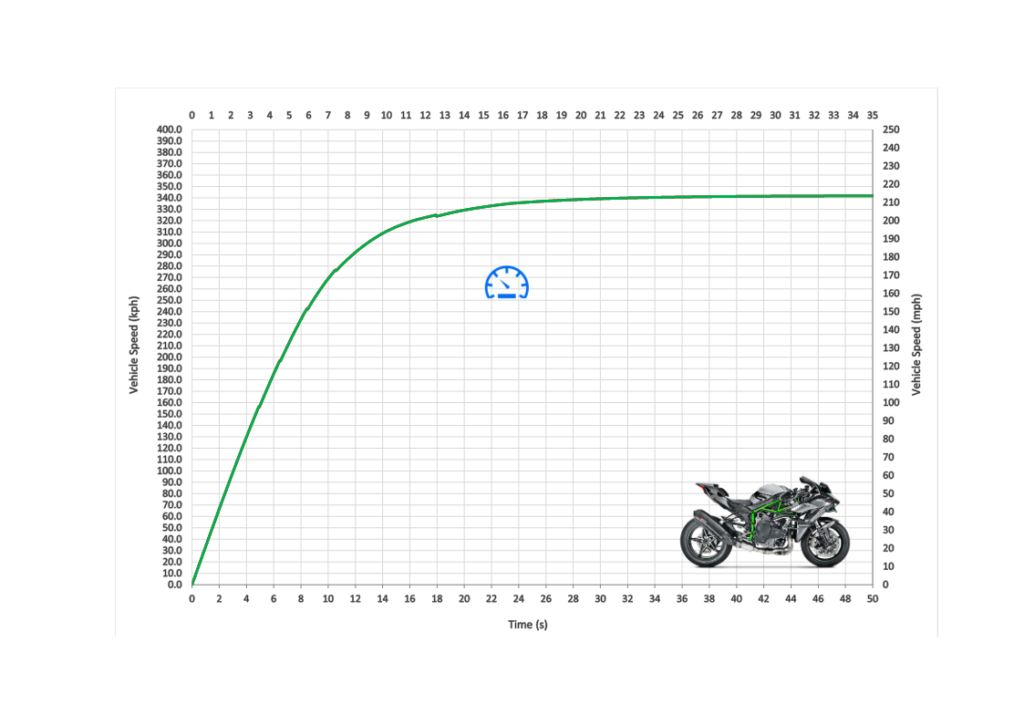