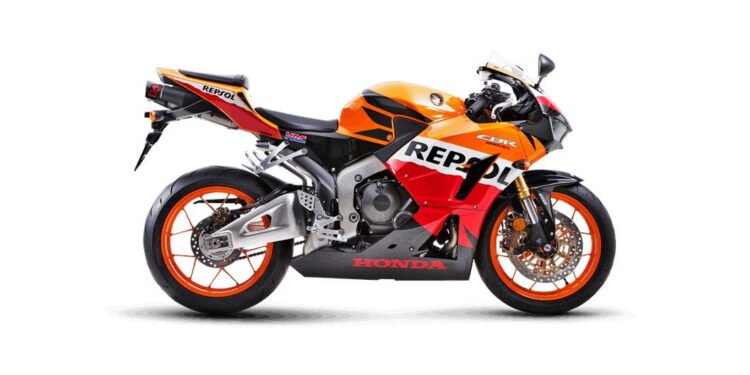 Honda’s CBR600 has been with us for what seems like an eternity.

Well since 1987 and 34 years to be precise. Around halfway, through its life and in 2003 the CBR series changed and went all racy on us.

You could argue that it was not the same bike as the original despite keeping the name but getting the double ‘R’ at the end,

The original CBR600 F series was a very competent all-rounder and excelled at almost anything that you could through at it. That was a massive part of its appeal.

But as the World Supersport championship became more competitive and focused so did the road bikes that made up the basis of the machines that competed.

You can pretty much blame Suzuki and Yamaha with their no-compromise GSX-R and YZF-R6 models for forcing Honda and the like to ditch the all-rounder ethos of the CBR600 series and create a more race-orientated and single-focused machine.

So in 2003, the CBR600RR was born and it was a complete departure from the CBR600 F series it replaced. Looking totally different with its RCV211v MotoGP-inspired design and under seat exhaust system.

It was and still is a cracking-looking motorcycle that is the epitome of a ‘race bike’.

Honda still catered to punters that wanted a motorcycle like the CBR600 F series as they reintroduced the CBR600F in 2011.

That dreary re-imagining of a classic model ran all the way to 2018 alongside a larger engine variant called (no surprises) the CBR650F.

Then finally in 2019, the CBR650R was introduced which was a nicer looking and sportier version of the F it superseded.

It was closer in spirit, character, and performance to that of the CBR600F4i which is one of the best though perhaps alongside the F3 too which was also awesome.

Confused a little? Anyway, the model we are testing is the CBR600RR from 2017.

Perhaps because of Euro 3 regulation, it makes a little less than previous models and is probably one of the least powerful in the class where it is up against the YZF-R6. Daytona 675, ZX-636R and GSX-R600 are all worthy competitors. 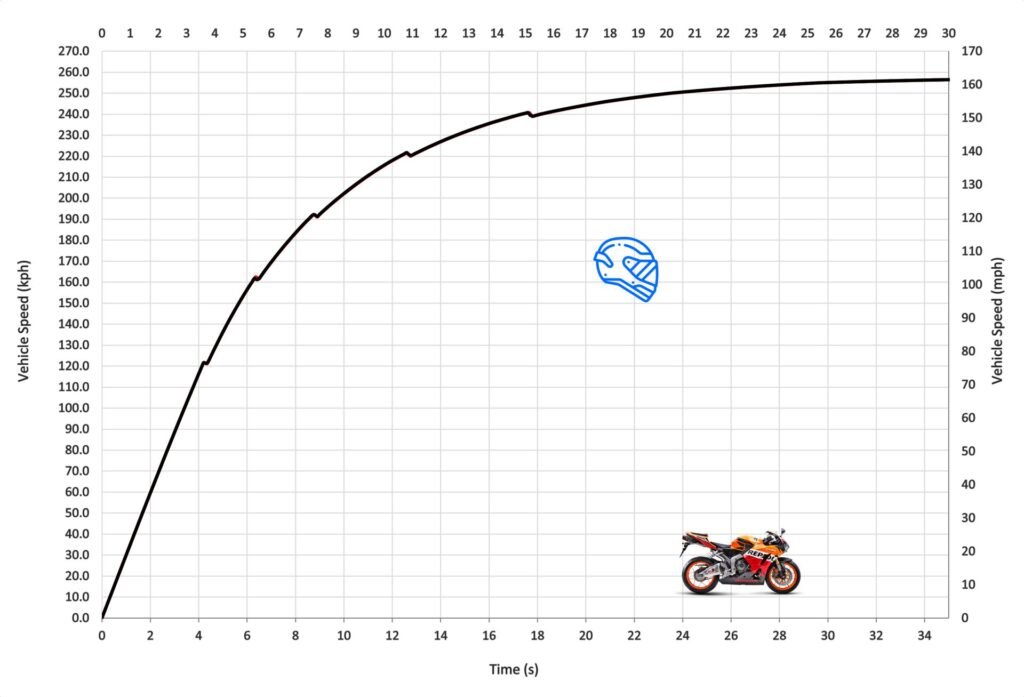 Like the CBR600RR itself, its 599 cc Inline 4 is pretty much the epitome of a high revving inline 4 engine and arguably one of the best made.

The engine was so good and reliable that it was used as the official Moto2 engine from 2010 to 2018.

Despite there being many regulations and restrictions in place Moto2 bikes were said to rev to more than 16000 rpm and make north of 140 horsepower at the wheels.

The top speeds on the faster tracks were close to 300 km/h.  So we know that the CBR600RR engine is good but what about stock?

With peak torque delivered so high in the rpm range, it’s a clear indication of this engine’s purpose in life, which is to power out of corners on the racetrack right in the powerband.

Power below 7000 rpm is not really important on a racetrack as on all but the slowest corners revs will not drop that low. Unless of course, you race on a kart track.

To be honest, CBR600RR has a very typical 600 cc Supersport engine that is very fast if you are prepared to work as it needs to be revved hard to make it move like the single-purpose motorcycle that it is. 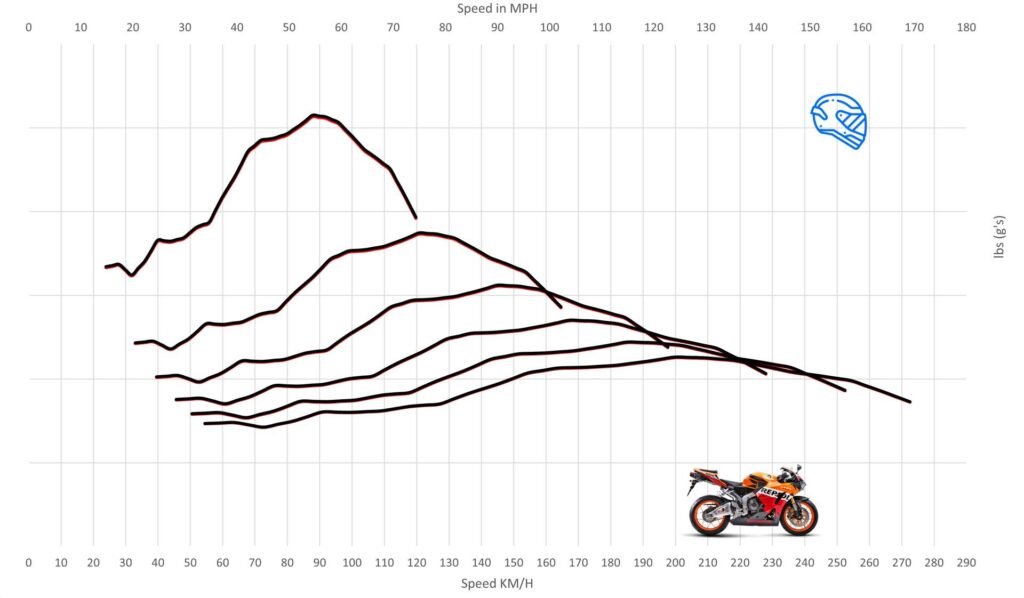 For street use, while commuting keeping the engine spinning above 7000 rpm might be seen as anti-social as well as not being so nice to the wallet in terms of fuel consumption.

This does not mean to say that there is no meaningful power and acceleration available below this 7000 rpm, but the bottom-end response is a little tepid.

This is not a criticism of the CBR600RR as pretty much most Supersport bikes exhibit this character not to mention as the CBR is a relatively small engine bound by Supersport regulations that demand a lot of power peak power.

That power has to be at the top of the rpm range at the sacrifice of the lower midrange and bottom end.

The same can be said about the GSX-R600 and Yamaha R6. With the R6 actually being even more weedy low down in the rpm and needing to be above 10000 rpm to really make decent progress.

Kawasaki has been cheating for years with their 636 cc so this engine is the most flexible of the 4-cylinder engines while Triumph minus a cylinder has a 675 cc engine that produces the most torque of the class.

If you wanted a more street-focused engine but your desire was to keep it in the Honda family you can always opt for the CBR650R or CBR650F or sand older CBR600 of the F family.

You would gain more at the bottom and midrange though at the sacrifice of that howling top-end of the CBR600RR.

The CBR600RR is a fast motorcycle but as mentioned like all 600 cc Supersport motorcycles you must work for it and that is part of the fun and the attraction.

The great thing about 600 cc Supersport motorcycles is that they are wickedly fast but not too stupidly fast where their performance can rarely be used on the road like perhaps a 200 horsepower 1000 cc Superbike some of which can get close to 130 mph in second gear.

The first gear on a CBR600RR will go north of 70 mph which is a lot for a small engine that doesn’t make a lot of torque.

So, for a good launch, it does require a lot of clutch slip to inhibit the chance of a bog which will kill your launch and ET.

600s including the CBR are not motorcycles where you can fluff the start and drive it from low revs if you want optimum 0-60 mph / 0-100 km/h ETs as they won’t wake up generally until above 7000 rpm.

If you can manage the former and your clutch skills and throttle control are decent, you will consistently get below 4 seconds from 0-60 mph.

While the bike will wheelie it is not really a problem though you know that you are charging hard when the front wheel is skimming the ground for the whole of the north side of first gear.

You can power wheelie in first. Just drive it from low revs and when it gets to around 7000-8000 rpm it will rise quite willingly.

The CBR600RR is quick but is pipped by the more powerful YZF-R6.

Most of my times were in the low to mid 11s, 10s are only possible if you are light and/or nail the launch and every gear change thereafter perfectly.

For best times you should take first gear right up to 14000 rpm + then change all remaining gears at around 13000 rpm or a touch over. Stretching each gear out can net you higher terminal speeds but your ET will suffer slightly.

The Dragy 60-130 mph time is a respectable 7.3 seconds though for perspective this is about 0.4 slower than an R6 and around 2.5 seconds slower than a current 1000 cc Superbike

CBR600RR Acceleration through the gears

On the road, the CBR600RR engine is smooth and offers more than enough power to get about.

If you are running in 3rd or 4th gear around town there is not a whole lot of overtaking power so better to run a lower gear and slightly higher rpm if you want to have more acceleration available to you.

70-100 mph in top gear will take 5.10 seconds which is decent and more than enough to get you past slow-moving traffic while an R6 will take 5.90 seconds so no real need to kick it down a gear,

We managed a flat 160 mph which in top gear is around 14200 rpm which is where the power tapers off on our example which is a little more abrupt than other examples I have seen.

For this alone, the CBR could go quicker but also small frontal area and the low screen does not offer much in the way of protection if you are taller than a Jockey.

CBR600RRs respond well to tuning so it is not unheard of for CBR600RRs of this vintage to make close to 120 horsepower at the wheels once the restrictions are removed via an ECU flash.

All in all, the CBR600RR offers very thrilling and provides typical 600 cc Supersport performance in a straight line.

If you are prepared to work for it, you can keep with most things on the road up until a point and even surprise the odd 750/900 from yesteryear.