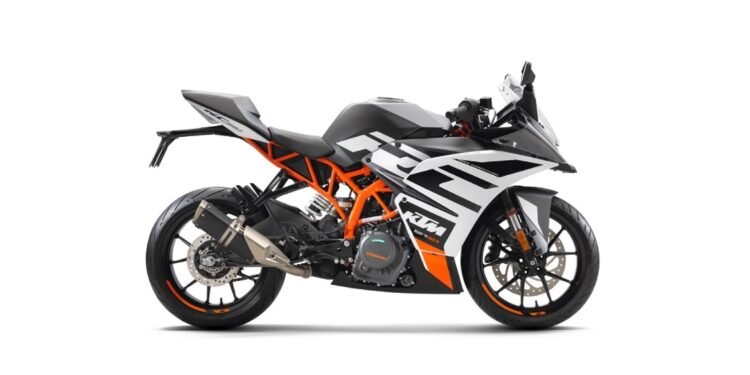 The KTM RC 390 is a small focussed single-cylinder sports motorcycle that competes with the Ninja 400 and CBR500R and YZF-R3. 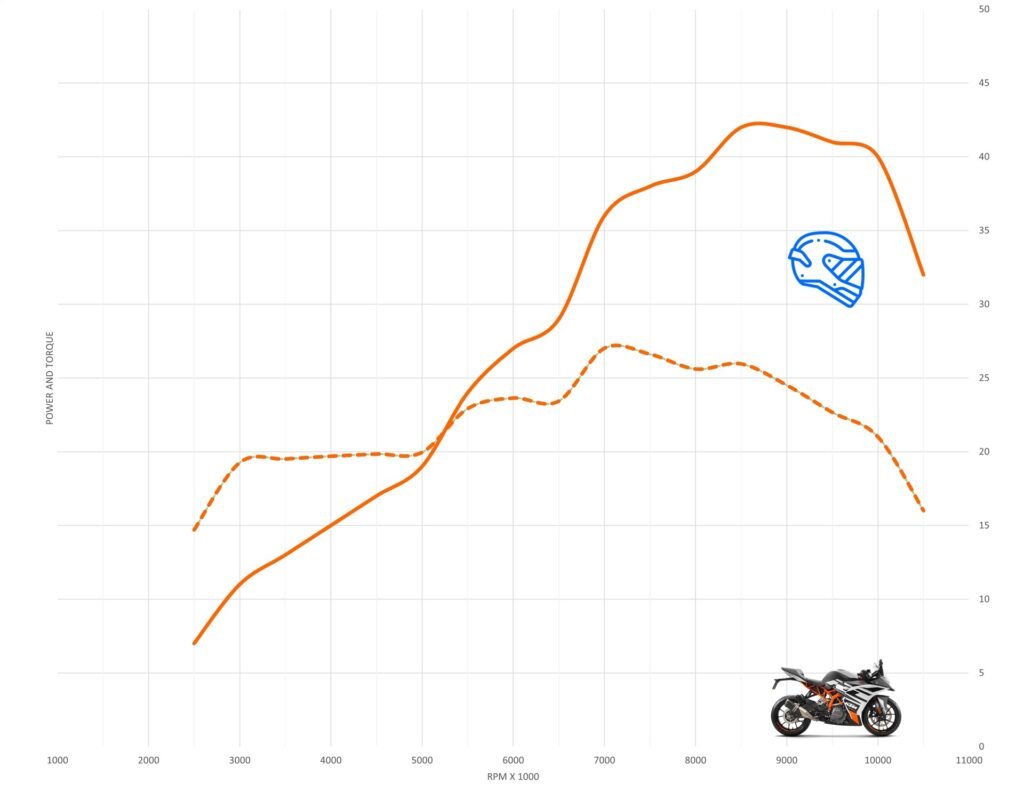 The KTM RC 390 has a real corker of a motor It’s powered by a compact and powerful 373 cc single-cylinder engine that produces a claimed 43 horsepower.

Typically, when measured at the rear wheel power is lost through the transmission and this loss normally stands at around ten percent, though at the rear wheel the KTM RC 390 makes 42 horsepower. I’d guess that KTM’s crank power claims might be a tad conservative.

That 42 horsepower arrives at around 8500 rpm with peak torque making itself felt at 7200 rpm.

The power curve is quite interesting and not typical of a single-cylinder engine.

The RC 390 power delivery looks more like a short-stoke L2 engine that encourages you to chase rpm, whereas typically single-cylinder engines produce a more even spread of torque from low to high rpm without any pronounced kicks or surges as you pass certain rpm points.

The KTM RC 390 has two distinct jumps in torque. They are not as noticeable on the road as the torque curve would suggest but you do feel this willingness to chase more rpm with every throttle input. 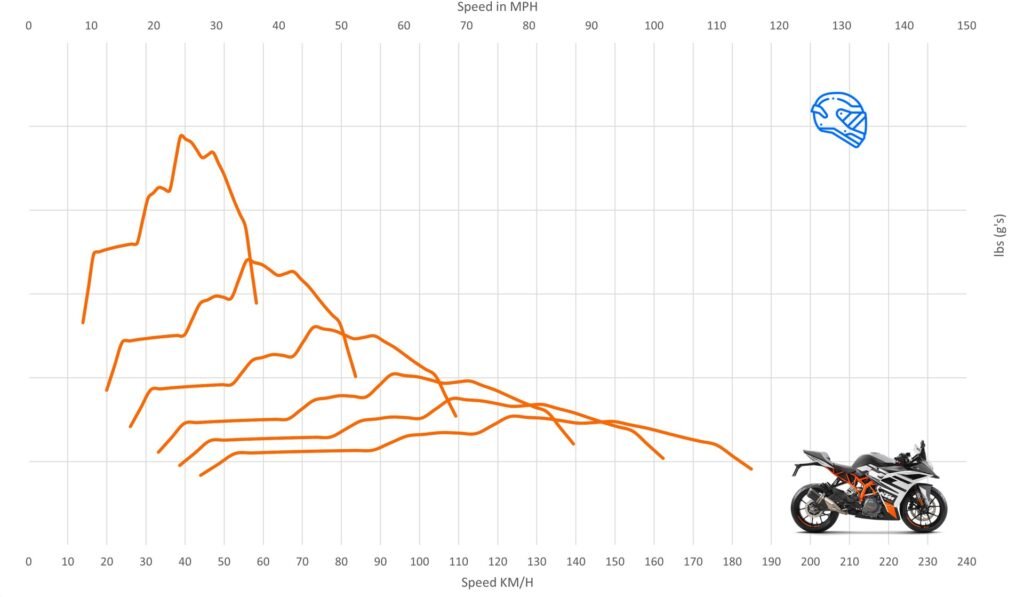 The KTM RC 390 is quite a peaky engine and really thrives between 7000 and 10000 rpm. Despite this, there is still plenty of acceleration below 7000 rpm. Drive from as low as 3000 rpm is there too, meaning that you can run higher gears and still have good torque to get you up to speed.

Though primarily it’s an engine that likes to chase the red.

The light weight of the KTM RC 390 really helps here too as it is noticeably lighter than some of its competitors by some degree.

You can cruise at 60-70 mph highway speeds showing between 6000-6500 rpm without having to kick it down a gear or two like you would if riding some competitors.

Kicking it down to fifth at highway speeds will put you right in the meat of the peak/torque thrust with the little KTM accelerating as if it were a bigger motorcycle.

For a moment the little KTM RC 390 can match the acceleration from 70 mph in fifth gear as a current model Yamaha YZF-R6.

How about this, from a 3rd gear roll-on starting from 20 mph the KTM will put a few bike lengths on an R6 all the way to 60 mph. Very impressive indeed considering it gives away almost half the capacity of the R6 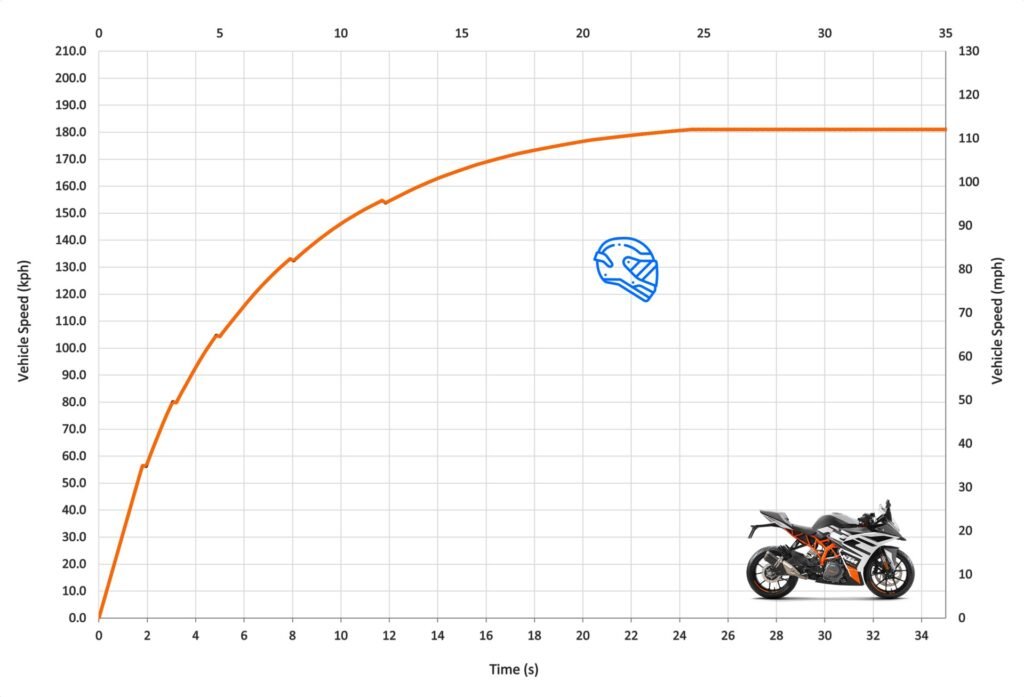 Due to the punchy engine and relative lightweight, the KTM RC 390 is a quick bike and feels like it could be displacing more cubic capacity.

The aggressive power delivery as earlier mentioned also helps it feel faster than it is.

If you nail first gear the RC 390 will willingly lift the front, and this makes launching it a little more tricky than other motorcycles in its class.

When you get it right you can expect the front wheel to hover through a part of first gear.

You must be very quick with your left foot as the little RC will rev through first gear very quickly and you’ll find yourself hitting the rev limiter in no time.  Second gear while a little more sedate is expelled very quickly too.

The RC 390 is low-geared, and you need third gear to hit 60 mph, so for the 0-60 mph sprint you need to be very precise and fast with gear changes otherwise you’ll hurt your ETs.

The clutch is quite sharp but provides good control and feedback. Launching from anywhere between 6000 and 7000 rpm will do the trick, then for first gear changing up at just before the limiter is best if you can avoid hitting it as rpm piles on fast.

These times are pretty optimum. Typically, mid-thirteens at 95 mph would be achievable for a competent average-weight rider.

The RC 390 is one of the quickest in class but is pipped by the Ninja 400 but can trade blows and beat the CBR500. It’s a little faster than the Duke 390 though due to having a full fairing but I think we had a ‘good’ one here.

The RC 390 is small and narrow so not too bad through the air, though it has a small screen and is very hard to get into a sufficient tuck if you are of average size let alone tall.

Having 42 horsepower means that adverse conditions will have a greater effect on outright acceleration and top speed performance.

In neutral conditions, the RC 390 will kiss the rpm limiter in top gear which equates to a top speed of 112.5 mph for the most committed.  Out racing your friends between corners and on short straights expect to hit 95-105 mph consistently.