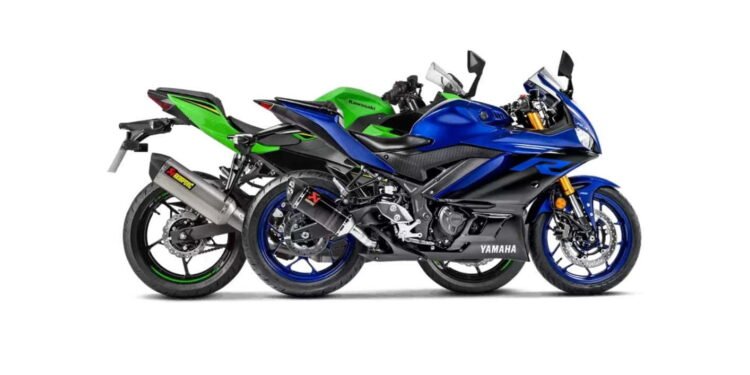 The entry level sportsbike class is hugely competitive with many capable options at different engine sizes, configurations and price points. Two that are right up there and leading the pack are the Kawasaki Ninja 400 and Yamaha YZF-R3. Both motorcycles are very similar sub 400 cc parallel two-cylinder engines that are light and adorned with attractive sporty looks that resemble their larger siblings.

You may be reading this and considering either one and want to know how they accelerate and compare with to each other from 0-60 mph 0-100 km/h top speed and so on.

In the meantime, here we will compare them both, so I’ll get straight into the performance comparison of the Ninja 400 vs YZF-R3.

Ninja 400 vs YZF-R3 Power and Torque on the Dyno

Kawasaki’s Ninja 400 has a 78 cc engine capacity advantage and it certainly shows on the Dyno as is evident in the below graph comparison.  The Ninja 400 is a 399 cc parallel two cylinder engine making a claimed 49 horsepower and 28 ft/lb of torque.

On the dyno the rear wheel figure is an impressive 44 horsepower and 26 ft/lb of torque which is not far off of what Kawasaki claim at the crank. Remember typically we can expect to lose between 10-12% through transmission loses when power is transferred from the crank to the wheel.

How both motorcycles delivery their power is pretty similar and smooth though the Ninja 400 does not look as smooth on the dyno but the little peaks and troughs are by and large not felt on the road as such.

The YZF-R3 makes great power and is a good little engine and is stronger than the Ninja 300 which preceded the Ninja 400 though it can’t really make up for its 78 cc displacement deficit to the 400.

To illustrate this, it really hits home when we can see that at 3500 rpm the Ninja 400 makes the same torque as the YZF-R3 does at peak.

In isolation the YZF-R3 is quite a responsive little engine with a good spread of power and torque, though to really make progress and if chasing equally or faster machinery you would want to keep the engine spinning above 7000 rpm where it delivers good performance.

The Ninja 400’s on the other hand has an engine that sits just below the imaginary border of small and big bike engine performance and offers a bigger bike feel when twisting the throttle and is less frantic.

Like the YZF-R3 the Ninja 400 does have a sweet sport if you want to get a move on which is 1000 rpm than the YZF-R3 which is lower at 6000 rpm though you can afford to be lazier with shifts as the Ninja offers more drive and is less rpm dependent.

Both engines are extremely rewarding and enjoy being thrashed through the gearbox but ultimately the Ninja 400 offers more engine performance courtesy of its extra capacity.

As clearly seen the Ninja 400 dominates the dyno due to making more power and torque right throughout the rpm range and this translated through the gears and on the road too in equal fashion.

If you compare the first gear of both motorcycles, you can see that the Ninja 400 has a massive advantage producing more accelerative thrust throughout the whole speed range of first gear while also reaching a slightly higher top speed in first gear too versus the YZF-R3 and as a result the YZF-R3 has no chance to compete in first gear.

Interestingly though if we look at 2nd gear, the Ninja 400s big power and torque advantage is no way near as pronounced with acceleration/thrust being remarkably similar with the Ninja 400 having only a slight advantage between 30-50 km/h and from 50-60 km/h and then taking over 65 km/h.

Interestingly below 30 km/h the Yamaha YZF-R6 exactly matches the Ninja 400 for thrust/acceleration despite making much less power and torque.

Third gear the Ninja 400 re-exerts its advantage but the YZF-R3 is not that far off but from forth, fifth and sixth gear, it’s clear that the Ninja 400 engine offers much more performance and acceleration from any speed if comparing gear for gear.

In respect of the YZF-R3s competitive second gear performance, this demonstrates that even when significantly down on power and torque lower gearing can help make up for that fact though with lower gearing the top speed of that gear can suffer versus a competitor with longer gearing unless the weaker motorcycle with the lower gearing revs much higher which the YZF-R3 does not.

As mentioned in the higher gears the Ninja 400 is dominant at all speed range! For example, if both motorcycles were cruising along at 70 mph/113/km in sixth gear, the Ninja 400 would be operating at around 6600 rpm while the lower geared YZF-R3 would be singing along at 7200 rpm.

Still, despite the lower gearing of the YZF-R3 if both were to look for a fast overtake the Ninja 400 would clear off.

To accelerate ahead of a hypothetical slow-moving car as quickly as the Ninja 400 could in sixth, the YZF-R3 would be required to kick-it down to 5th gear which would bring the revs up to 8100 rpm.

If look at the thrust curve you will see that the YZF-R3 in 5th roughly matches the Ninja 400 for thrust/acceleration in sixth but only up until around 130 km/h where the Ninja 400 clears off once again.

On the road pretty much the YZF-R3 requires a gear lower (where possible) than the Ninja 400 to keep it in sight so be prepared to work that gearbox if you own an R3 and your friend owns a Ninja 400.

We have previously tested these motorcycles before and they both achieve very similar times with some slight variations. It is no surprise that the Ninja 400 is a faster accelerating motorcycle than the YZF-R3 as the Ninja 400 wins on the dyno and is slightly lighter and thus wins also in any hypothetical in-same gear roll on scenario.

Getting them both off the line is not too hard but for best effect you need be pretty abrupt with the clutch rather than slip.

The Yamaha YZF-R3 for comparison is a whole second behind achieving the benchmark 0-60 mph time in 5.17 seconds and 0-100 km/h 5.45 seconds.  Unfortunately for the YZF-R3 it does require an extra gear change to hit the magic 60 mph or 100 km/h so this does cost it a little time, so clutchless fast gear changes are definitely required.

From 60 mph onward the Ninja 400 extends its advantage as it hits the magic 100 mph in 12.58 seconds which is a tad slower than when we previously tested.

The Ninja 400 maintains a 1 second lead to 60 mph and beats the YZF-R3 by one second to the quarter mile too.

The YZF-R3 is convincingly beaten from a stop and from a roll if in the same gear at the same speed by the Ninja 400 and regardless of gear.

As a YZF-R3 rider, your best chance against the Ninja 400 would be from a second gear roll from around 30 km/h where from that speed up to around 70 km/h you might be only a bike length or two behind but that’s the best fight that the YZF-R3 can put up as from there on the Ninja will convincingly walk away from the YZF-R3 all else being equal.

A simple exhaust and tune can have the little Ninja hitting 125 mph and with a tail wind and decline it would even be possible to get to 130 mph which is very impressive for an entry level 400 cc parallel two-cylinder engine.

The YZF-R3 does well and manages 112.1 mph but I reckon 115 mph is doable and likewise with an exhaust and tune 120 mph is on the cards too.  This is also very impressive considering that we are talking about a two-cylinder 321 cc engine.

The fact that the Ninja 400 is a faster motorcycle both from a stop, in-gear and top speed should not put you off the YZF-R3, as the little Yamaha is fast and offers an abundance of thrills. Not to mention that it is very much a baby R6/R1 which makes it a great choice if you are a Yamaha fan.

I could say the same about the Ninja 400 and its family tree too while also pointing out that it offers a very similar experience to the YZF-R3 just a little bit more if you must have the faster bike. Both are great little machines.