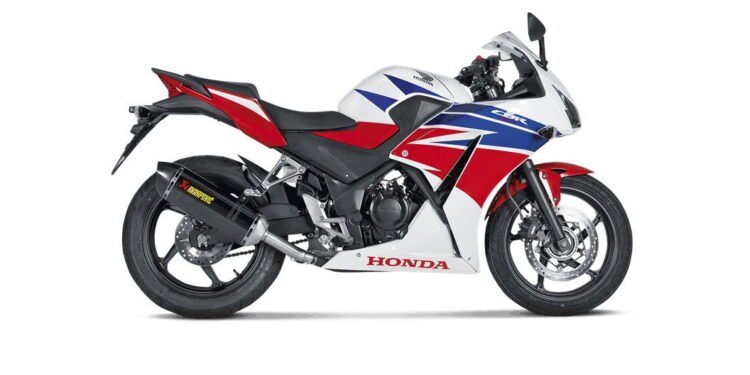 Honda’s CBR300R is an entry-level sports motorcycle that is the direct replacement of the CBR250R which was a model that ran from 2011 to 2013. The CBR250R was a direct competitor to the Ninja 250R with both sharing particularly good sales and popularity in many markets.

A recent trend has seen entry-level lower cc motorcycles growing in engine size and power that commenced with Kawasaki bringing to market the Ninja 300 in 2012 and thus replacing their Ninja 250R.

For Honda, The CBR250R’s single-cylinder engine grew from 249 cc to 286 cc via a longer stoke and was highly likely a response to Kawasaki’s Ninja 300 and in anticipation that other competitors may introduce larger engine models to the market. 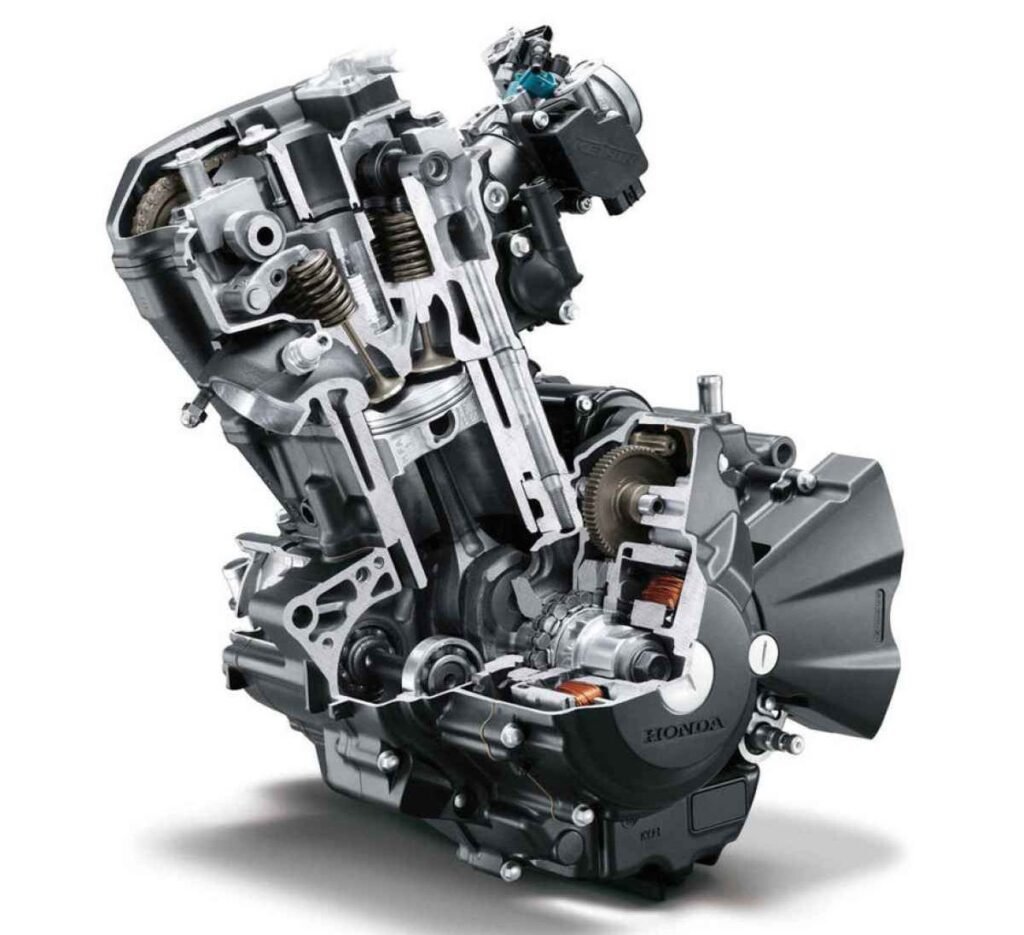 Like the CBR250R and its single-cylinder engine when compared to the Ninja 250R, the CBR300R again played second fiddle to Kawasaki’s Ninja 300.

Honda’s CBR300R tended to be favored more by those that wanted to commute in comfort and with a little less of a frantic engine via the typically torquey single cylinder engine character.

It was considered the more sensible option and with better ‘Honda’ build quality over other class alternatives and is arguably not as exciting. 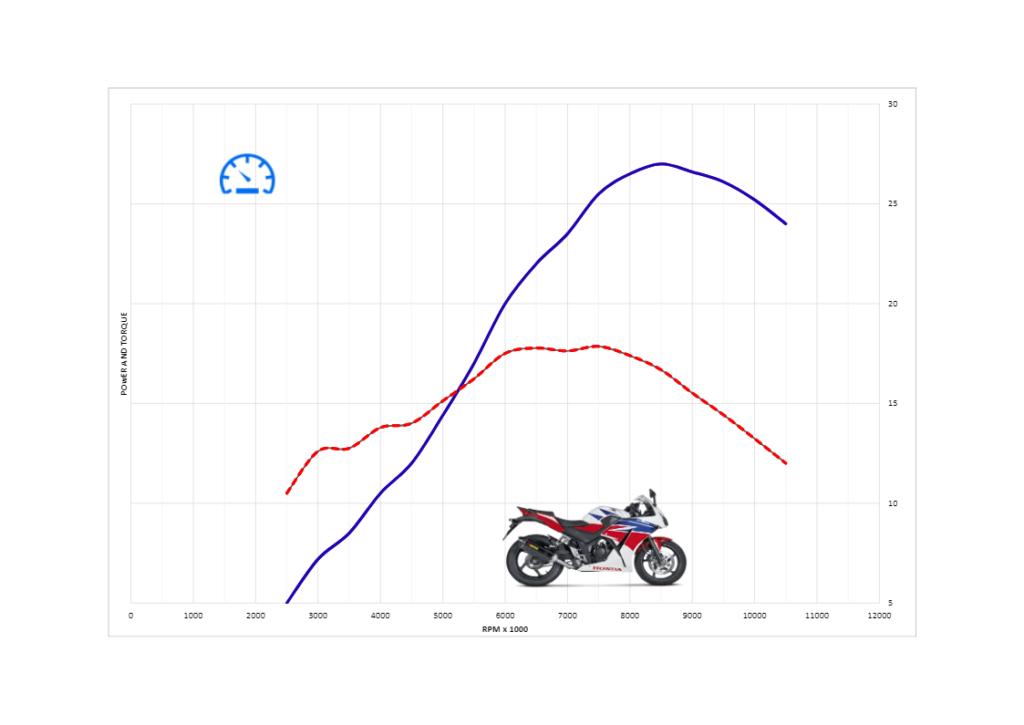 The Honda CBR300R produces 27 hp at 8500 rpm which is around 3 horsepower less than the claimed crank figure.

That is about right considering that you generally lose around 10-12% of power through transmission losses.

The CBR300R’s delivery is typical of a single cylinder engine that builds its power and torque quickly with a typically large drop-off after where peak power is made – which in the case of the CBR300R is around 8500 rpm.

While the CBR300R will rev to 10500 rpm which is not that higher for a small capacity motorcycle it is quite high for a single-cylinder motorcycle engine.

The engine is certainly not a screamer and does not respond as well to being thrashed up to its rev limiter as some of its competitors, which is a character it shares with its smaller CBR250R sibling.

For best progress, the engine is most comfortable in its mid and upper midrange which is between 6000 and 8500 rpm but is tractable enough from 3000 rpm around town.

If we compare it to KTM’s single cylinder alternative, all be it a larger capacity the CBR300R looks very disappointing in comparison 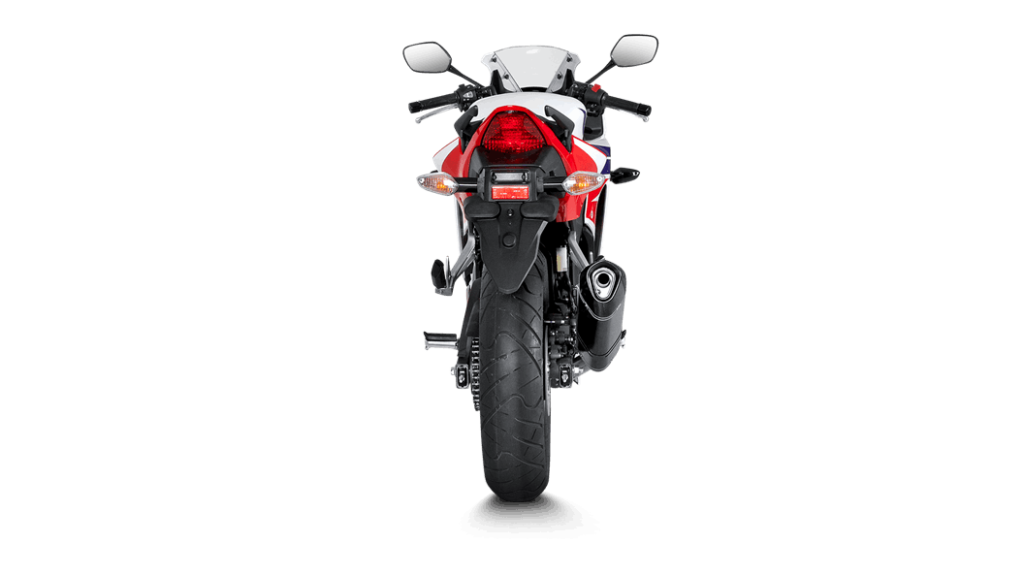 The CBR300R is one of the slower motorcycles in the 300 cc class motorcycles as it does not have the higher rpm peak horsepower of rivals such as the Ninja 300 or Yamaha YZF-R3.

The CBR300R’s performance is more in-line with the Ninja 250R though it does have a slight edge if push comes to shove and has better low and midrange power.

For best results you have to briefly slip the clutch at around 6500 rpm before dumping it, then you have to take 1st gear right to the redline, then hook second gear.

For best acceleration thereafter you should change up between 9000 and 9500 rpm as if you rev out the remaining gears too far, you’ll hurt your ETs.

The CBR300R’s top speed is very dependent on your size and how favourable or non-favourable the wind is as is true with all smaller capacity motorcycles under 50 hp.

Either way in neutral conditions you can expect to see 97.85 mph which is a little short of the magic ‘ton’ though on a good day you might just be able to hit a real 100 mph and certainly possible on and decline or with that tailwind.

Talking of highways, if you live in a country where cars sit above the posted speed limit and you do too, it does not leave much in the way of acceleration to overtake.

From 70 mph to 80 odd mph there is enough to get past slow-moving traffic which you will need to kick down to 5th gear for best effect.

On many Euro highways where traffic can often sit at 80+ mph, the CBR300R is left a little wanting and lethargic as you are only left with top gear and a rapidly falling power curve to overtake.

If you do not go much above 80 mph there is enough engine performance to keep up with traffic and provide nice but limited thrills.

The CBR300R is a bike that if I owned and had to keep for a while, I would look into getting an exhaust, and air filter, and having it set up on a dyno, as its CBR250R little sister does respond well to bolt-on mods.

Alternatively, if you must have an entry-level Honda other than the 300, their very own CBR500R could be a better option, as offers very much the same platform as the CBR300R, but with an extra cylinder and more power and acceleration. 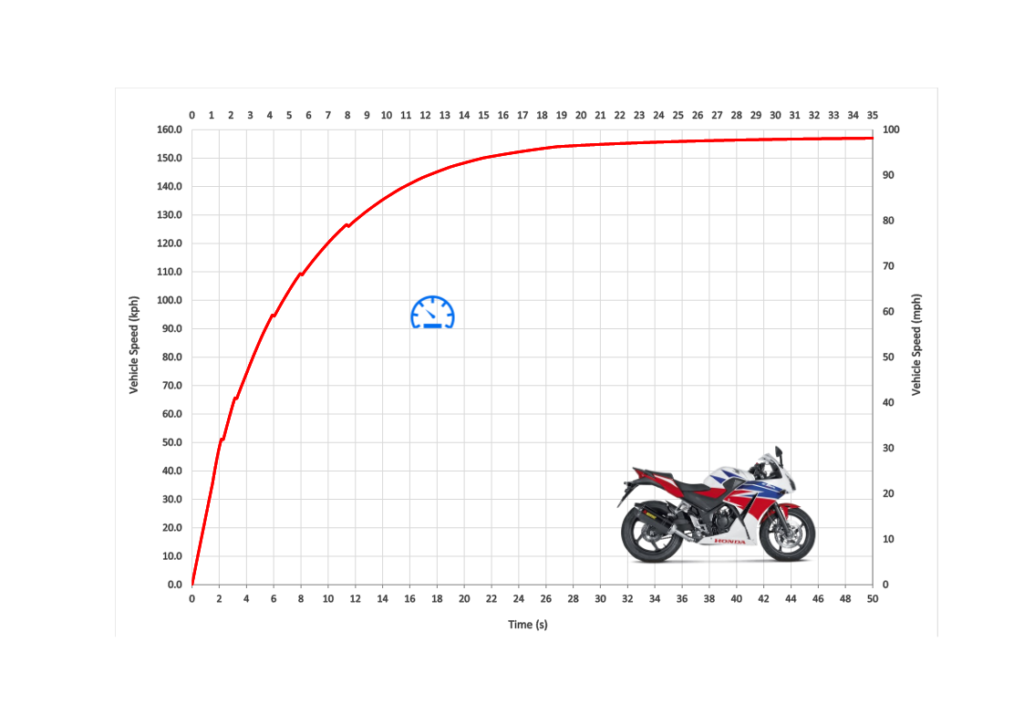 Honda CBR300R Acceleration through the gears