A drag race between a MotoGP bike and a Porsche 918

by Fabio Rossi
in News, Sportsbikes 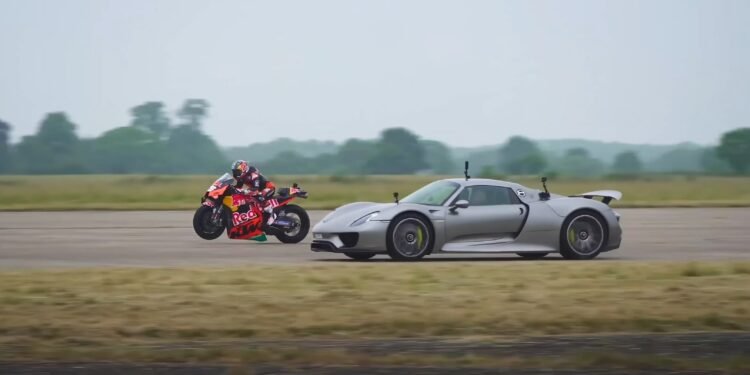 YouTube channel Carwow has put together some memorable drag racing comparisons over the years predominantly between cars, but they often throw a motorcycle in the mix to spice things up.

Recently Carwow pitted a Porsche 918 spider which is a Hypercar up against a 2021 KTM RC16 MotoGP bike.

The format for Carwow drag races generally revolves around 3 standing start races, a roll race, and a braking test.

The Hypercar representing Team Car is a beautiful Porches 918.

This amazing machine was launched back in 2013 and is a hybrid Supercar that is powered by a 4.6 litre V8 that is assisted by two battery-powered electronic motors.

For some perspective, the 918 is about as accelerative as a modern 1000 cc Superbike all the way to around 180 mph give or take, though due to it being all-wheel drive the 918 can often beat many Superbikes from 0-60 mph unless the Superbikes are expertly launched.

Most normal riders would be left for dead at the lights by a 918 as it will consistently put down sub-three second 0-60 mph times! 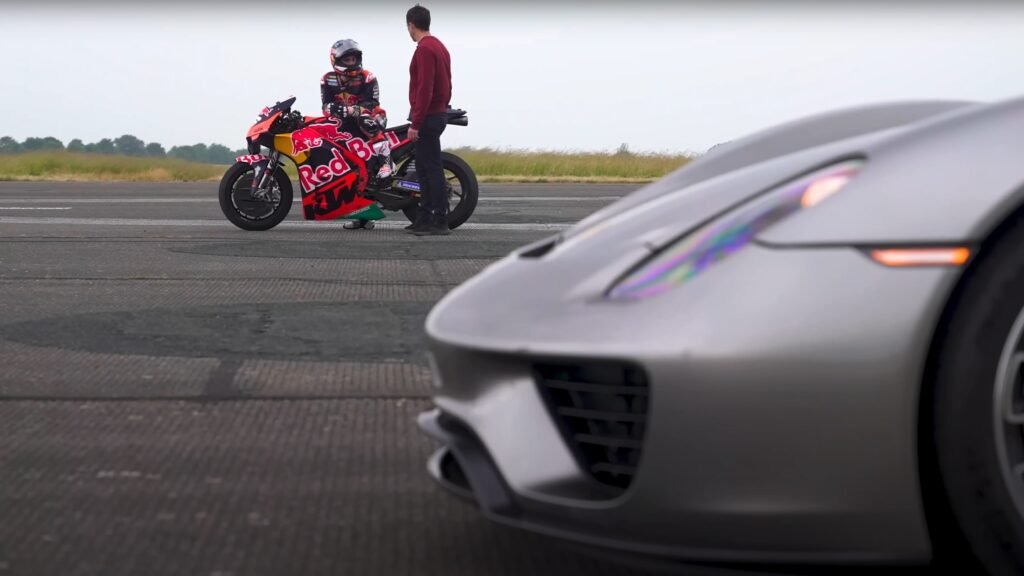 The quarter-mile time is around 9.80 seconds with terminal speeds at around 145 mph. Take the Porsche 918 flat out and 211 mph will be clocked. It’s a formidable machine!

Not a huge deal is known about the 2021 KTM RC16 MotoGP bike as teams do not quote accurately power and performance numbers.

What we do know is that the engine powering the KTM RC16 is a 1000 cc V4. In the Carwow video, a figure of 270 horsepower is quoted, though I would suspect that this is a very modest figure, and the number would be closer to 300 horsepower.

As for performance numbers, again no official claims are made though in 2021 at the Mugello Grand Prix the 2021 KTM RC16 was the fastest motorcycle through the speed trap hitting an insane 362.4km/h (225.1 mph)

This number was likely assisted by some slipstream, though without 350 km/h (217mph) was often observed through practice and race sessions.

Truly mind-boggling considering the Mugello straight is a little over 1km long, with around 250m of that reserved for braking.

As for the maximum speed potential, nobody outside of KTM knows though estimates put it anywhere between 380-400km/h with a long enough run.

It doesn’t look too good for the Porsche, despite it being monstrously fast in its own right.

Dani Pedrosa piloted the KTM while Mat Thomson drove the Porsche for most of the runs.

As you see from the video, from a dig to around 30 mph both the Porsche and the KTM MotoGP bike were remarkably close.

For the MotoGP bike to get out of the hole so fast the Holeshot device is used.

This lowers the centre of gravity and allows the rider to launch much more aggressively than if the ride height was set for racing. Drag racers on street-derived machines will do the same, but manually by dropping forks through the yokes and lowering the rear ride height.

Despite chassis trickery from the MotoGP bike the sophisticated launch control and AWD grip of the Porsche is very hard to beat.

As speeds increase it is no surprise that the MotoGP motorcycle easily gaps the Porsche.

It’s incredible how quickly the KTM MotoGP bike vanishes into the distance from a near 1000 horsepower Hypercar.

If you ever wondered how your 1000 cc Superbike would fair against a MotoGP bike, the same would happen seeing as the 918 is as accelerative as a current litrebike.

All three runs had the same result but unfortunately, the first two runs were not properly timed as Danny Pedrosa mistook the finish and hit the brakes some distance before the actual finish line.

In the last run, Dani got it right and the KTM RC16 did the quarter mile in 9.5 seconds. Unfortunately, the last run was far from perfect with the KTM spinning almost the whole 400-metre sprint.

With a perfect launch, the KTM RC16 MotoGP bike would likely do a 9 flat on the quarter mile with a terminal speed of around 180 mph but today was not the day. 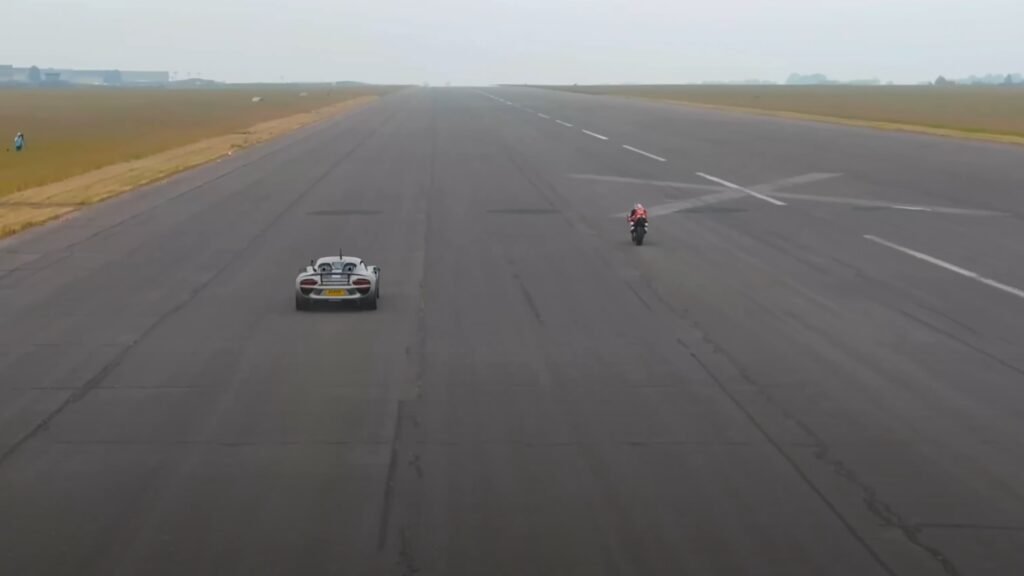 Equally the Porsche 918 did not get close to its potential with a quarter mile time of 10.1 but still a hugely impressive time.

Airport runways are often made of concrete, are dusty and do not provide nearly as good traction compared to a tarmac or a professionally prepared surface such as a drag strip.

The roll test was much the same too, with the KTM MotoGP bike disappearing from the Porsche 918 even though the car was using second gear for each run while the bike used 3rd gear first, then fifth, then 6th.

Gearing on the MotoGP bike is quite high, with 3rd gear good more 140 mph plus depending on track it is set up for set up.

The Porsche 918 only got ahead for any meaningful time when the KTM used sixth. Though it was not long until the KTM caught and passed the 918 at silly speeds.

Lastly was the braking test. This is a test where the cars often come out on top as they just simply have more grip available to them afforded by their extra wheels and wide tyres and long wheelbase.

On initial braking it was close, but all motorcycles including MotoGP bikes are particularly weak braking for that last 30 mph to zero, which is where the cars often eat up the bikes.

The result is no different here against the MotoGP bike with the Porsche 918 gaining most of its advantage sub 30 mph.

The bike would fare better if braking from a very high speed, but it is unclear which of the two would brake sooner and cover a shorter distance.

It was a fun comparison and I look forward to more with the MotoGP bike. Perhaps against the Red Bull F1 car that has made a few recent appearances.

You can watch the full suite of races below.

If you need a new car, please check out Carwow for the best deals in the business.

You can’t buy an RC16 MotoGP bike but KTM has plenty of tasty alternatives. KTM