Before the ZX-10R arrived in 2004 we had the Kawasaki ZX-9R. At the time it was Kawasaki’s flagship pre-litre class Superbike.

Kawasaki did have a foray into litrebikes with the very early ZX-10 which was itself the replacement of the GPZ but this was more of a sports tourer and a precursor to the ZZR1100.

The first Kawasaki ZX-9R arrived in 1994 with there being a number of major and minor revisions during its lifetime.

ZX-9R was overlooked all throughout its model life regardless of the version despite a good number of model revisions and updates throughout its life.

This was true when the Honda CBR900RR was the top dog, then followed the Yamaha YZF-R1 as the top dog after its introduction in 1998, and then finally Suzuki’s GSX-R1000.

Thrones changed bums like musical chairs with every one of the other Japanese manufacturers having their time in the seat except for Kawasaki and their ZX-9R.

There was never actually anything wrong with the ZX-9R though it just did not excel in any particular factor according to the motorcycle journalist at the time.

The ZX-9R was always the heavier and the slower handling machinei nthe class.

Though its engine was definitely its strongest trump card and was objectively the strongest when the Honda CBR900RR was the top dog.

Unfortunately, the  ZX-9R  never quite won the group tests because the Honda CBR900RRs handling and overall package were enough to have it ahead overall according to reviewers.

The Kawasaki-9R’s engine and its strengths were starting to look weak against competitors that all brought revised and totally new engines to the table. The 2003 Kawasaki’s ZX-9R is powered by an 899 cc Inline four. This engine was the last and most powerful version of the ZX-9R engine before the model was replaced by the first ZX-10R way back in 2004.

The new wave of literbikes around this time was all producing between 150 to 170  claimed horsepower at the crank.

Meanwhile, the Kawasaki ZX-9R has a claimed power of 144 horsepower and 74 ft/lb. So at best around 6 horsepower down on its weakest rivals.

The 2003 ZX-9R had the smallest capacity engine in its class, a class that was quickly evolving into the new ‘litrebike class’ that we have today.

The Ninja conceded at least 55 cc at best, and at worse close to 100 cc to rivals. So the ZX-9R was always going to have a tough time against the likes of the YZF-R1 and GSX-R1000 in particular that had full cream 1000 cc engines.

The ZX-9R performed well on the dyno, and often closely matched the R1 and 954RR of the era in terms of peak power despite giving away substantial engine capacity.

The peak power figure on the dyno is is a very respectable 130 horsepower produced at around 10600 rpm. 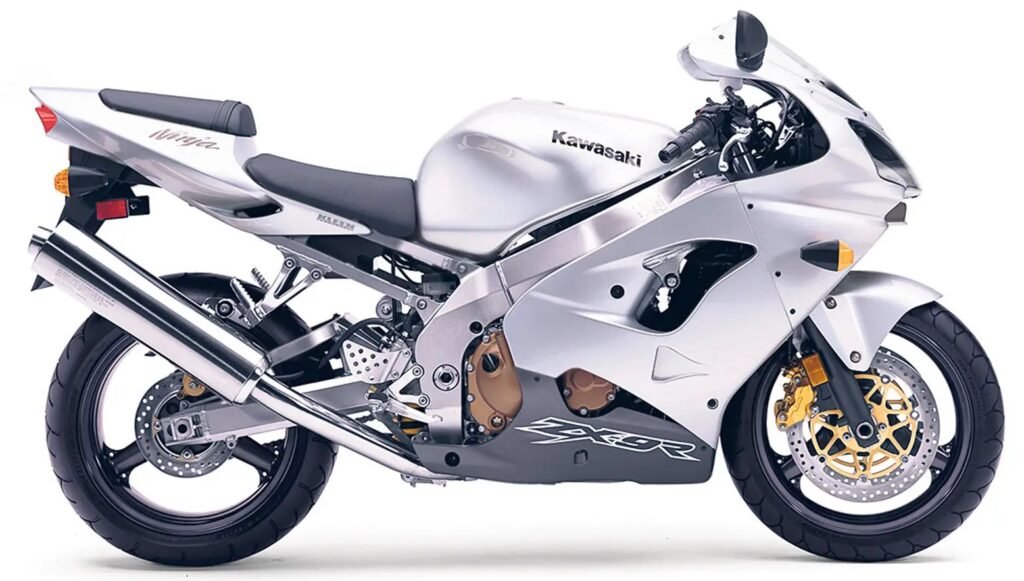 Torque is good too at 69 ft/lb though produced at 10,000 rpm, which at the time was very high compared to rivals that made their peak torque at least 2000 rpm sooner. This made for a quite peaky engine that thrived on revs.

The power delivery is very smooth thanks to those Keihin 40 mm CVKD carburettors.  There aren’t many peaks and troughs with power and torque building eagerly but linearly as it grows in intensity and really comes alive as the romp crosses 7000 rpm.

The Kawasaki ZX-9R power delivery is eager and exciting which ensures that it feels fast and perhaps faster than it actually is. This is a positive rather than a negative because the engine is a joy to work with.

How the Kawasaki ZX-9R delivers its power is very similar to many Kawasaki motorcycles that came after it, including the Z900 and Z1000 and all through the many ZX-10R models through the years.

This engine’s character’ consistency is quite remarkable and almost unique to Kawasaki.

If it were not for Suzuki and the power delivery of their GSX-R1000 range and naked equivalents, which also share uncanny commonalities in their delivery and character too. 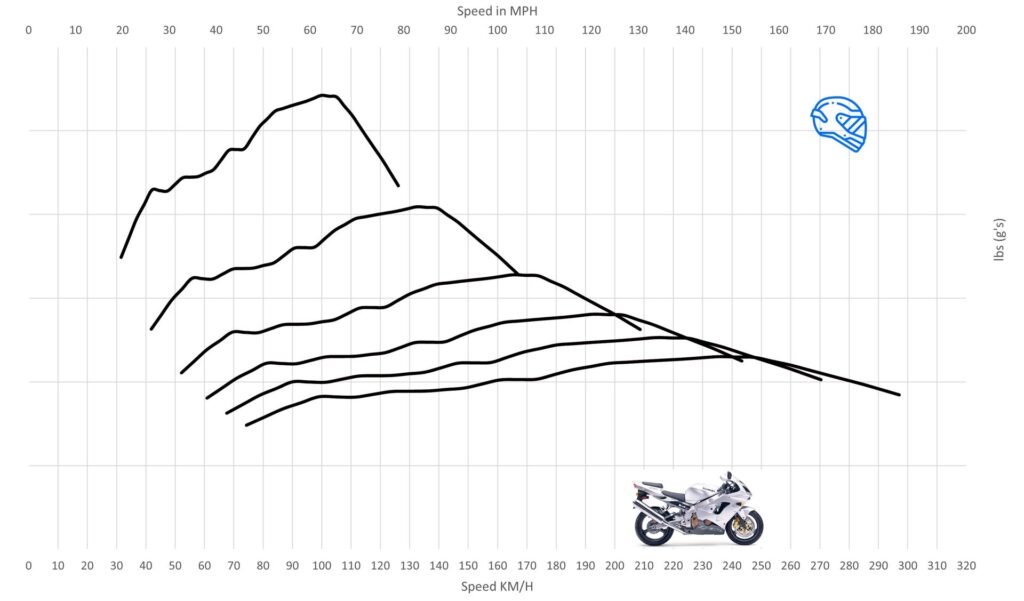 On the road, the Kawasaki ZX-9Rs  engine works very well.

Compared to its rivals of the time it lacked a little bit of punch in the bottom and midrange though its top-end power was quite strong and made for a ballistically fast motorcycle.

Like the many existing Kawasaki’s that share similar power delivery, the ZX-9R really does enjoy being revved to get the most out of it.

You can imagine the ZX-9R perhaps a more grunty 750 as It shares more in common with a ‘thrashy’ 750 than it does with a torque-laden litrebike from the early thousands.

Driving the Kawasaki from low to mid rpm is less intimidating than other literbikes as it takes just a fraction longer to spool up!

But when it does it really charges hard, with addictive accompanying airbox raw that has timbre not matched by many motorcycles past and present.

The engine really works best between 7000 to 11,500 rpm which is a range that the Kawasaki ZX-9R delivers strong drive.

Anywhere below 7000 rpm in third gear and above and the ZX-9R is a little slower to respond to throttle inputs.

If you demand fast overtaking ability in top gear from highway speeds the Kawasaki is a little less willing to accommodate, so kicking it down a gear to fifth or fourth is required.

For comparison, the ZX-9R would need to be in fourth gear at 70 mph to beat a 2003 Yamaha R1s acceleration in top gear.

This is because the R1 has more torque and is a lighter motorcycle despite the Kawaskia having slightly lower overall gearing in all gears. Kawasaki’s ZX-9R was allegedly the first production motorcycle to break into the 9s on the quarter-mile strip after achieving a 9.9 second some more than 20 years ago.

Technically speaking, the vast majority of Superbikes over the last twenty years are all capable of sub ten second quarter mile times.

They all just require perfect conditions along with a small and lightweight rider capable of launching them with 60ft times of between 1.6 to 1.8 seconds.

This is easier said than done because 60 ft times at the faster end of the bell curve does demand very aggressive clutch dumps that require a lot of courage and zero mechanical sympathy.

Some modern litre motorcycles can launch with a slower 60 ft time but still dip into the 9s simply because they have enough power to make up for that lost time from a dig.

The vast majority of Superbikes for most competent riders will be in the tens, with only the peak terminal speeds differentiating the performance between bikes.

Motorcycles with 130-140 horsepower at the rear wheel required the absolute best 60 ft times to achieve sub-ten-second runs as they simply do not have the peak power to claw back lost time if they launch not so optimally.

Fast forward almost twenty years and the Kawasaki ZX-9R is still capable of sub-ten-second runs though realistically we can expect low to mid-ten-second runs.

The ZX-9R is easy enough to launch aided by its weight which is typically heavier than many competitors. This means that it is less prone to wheelie aggressively than some.

The wheelbase is pretty average in length at 1410 mm and the clutch provides a good feel for precise launches.

I found the best way for me to launch the big Kawasaki ZX9R is aggressively slip the clutch at about 8000 rpm while not allowing the rpm to fall below 7000 rpm as your speed builds.

If you do let the rpm drop the ZX-9R  is in danger of bogging down just a little.

Once the clutch is engaged fully at around 40 mph, ensure that you have your weight over the front as much as possible and nail that throttle as hard as you dare while (trying to limit wheelies) to 11,500 rpm and rinses and repeat.

For best ETs and speeds,  you should change up to around 11,500 rpm for the first three gears and then 11,000 rpm for the remaining gears.

Back in 2003, the Suzuki GSX-R1000 was the fastest-accelerating motorcycle by an authoritative margin.  Second place was fought hard between the 2003 Yamaha YZF-R1, Honda CBR954RR and the Kawasaki ZX-9R.

Typically the Honda CBR954RR and Yamaha YZF-R1 had the edge on the ZX-9R sub 150 mph acceleration, if from a dig or a roll mph due to having similar power outputs and superior in-gear acceleration.

As the speeds got higher though, more often than not the ZX-9R had the edge thanks to its roomy cockpit and large protective faring.

This allowed for the rider to avoid the worse of the elements while rivals with the exception of the Suzuki GSX-R1000 were cramped and did not provide good protection.

Also to consider was Kawasaki’s ram air system which delivered more power the faster it went. A figure that could be worth 5-7 horsepower at 150 plus mph.

Not that anyone would really do this, but If you were to do a roll on form 150 mph, the ZX-9R would beat the Honda CBR954RR and Yamaha YZF-R1,.

It would only be bettered by the K3-K4 Suzuki GSX-R1000 which was totally dominant at any speed and in any gear thanks to its real 150 horsepower at the rear wheel, and its lightweight chassis and efficient protective fairing.

Keep the Kawasaki ZX-9R wide open and thanks to its good aero and roomy cockpit the big Ninja will go on to hit 176 mph after around 30 seconds from a standing start and a fraction over a mile.

The ZX-9R had a consistently stronger top end than the 954RR and YZF-R1.

Judging the Kawasaki’s engine in the context of today’s motorcycles, the ZX-9R objectively does not feel like the rocket ship it once was while up against the monstrous 180-200 horsepower motorcycles of today.

Its performance in a straight line is much closer to the now long-in-the-tooth Suzuki GSX-R750, Ducati Panigale 899 and 959 and perhaps the MV Agusta F3 800.