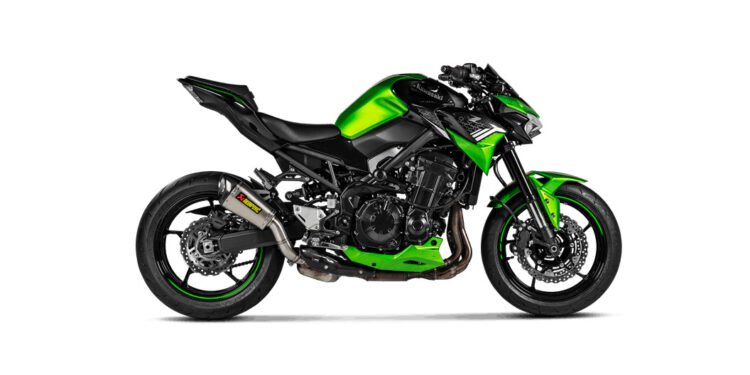 The Kawasaki Z900 is a midrange naked bike that competes in a very diverse and competitive class up against models such as the MT-09 ,790 Duke , CB1000R and even its sibling the Z900RS.

Below we have top speed and acceleration data through the gears accompanied by Dyno Curve and Thrust Curve graphs. 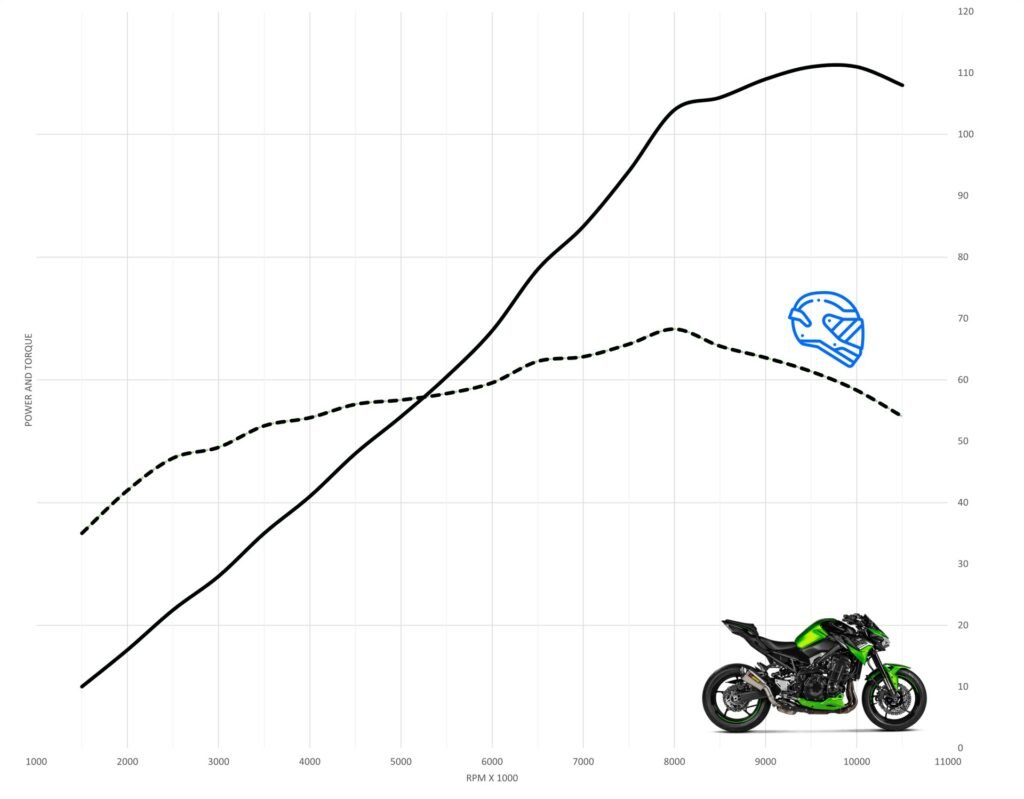 By today’s standards, these numbers are not earth-shattering in a world of 180-200 horsepower naked bikes.

On the plus note power and torque is spread very nicely and is delivered in a similar linear but intense way as to Z H2 with almost no peaks or troughs and will drive from higher gears from tick over pretty much.

We must remember what other motorcycles the Z900 is up against, as while it is easy to look to MT-10s, Streetfighter V4s, and 1290 Super Dukes Rs as competitors it would not be fair. 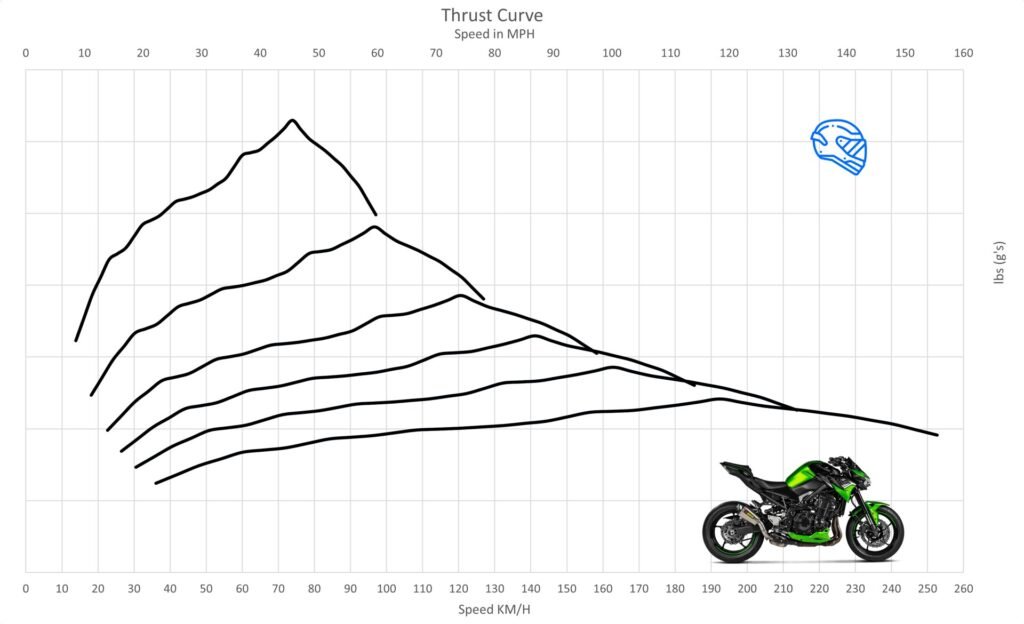 On the road the engine is excellent and like many naked bikes feels like it has more power than it has.

Much of this is down to lower gear ratios and a good spread of torque. The Z900 is very punchy and more so than many big superbikes that have 80 horsepower more.

For example, in top gear from 70-100 mph the Z900 can run with a first-generation ZX-14R despite giving away a large amount of engine capacity, power, and torque.

This is because the Z900 is lighter and has lower gear ratios so makes the best use of its available torque. The Z900 can do this as it does not need to be geared to hit 190 mph plus.

Z900 speeds in each gear 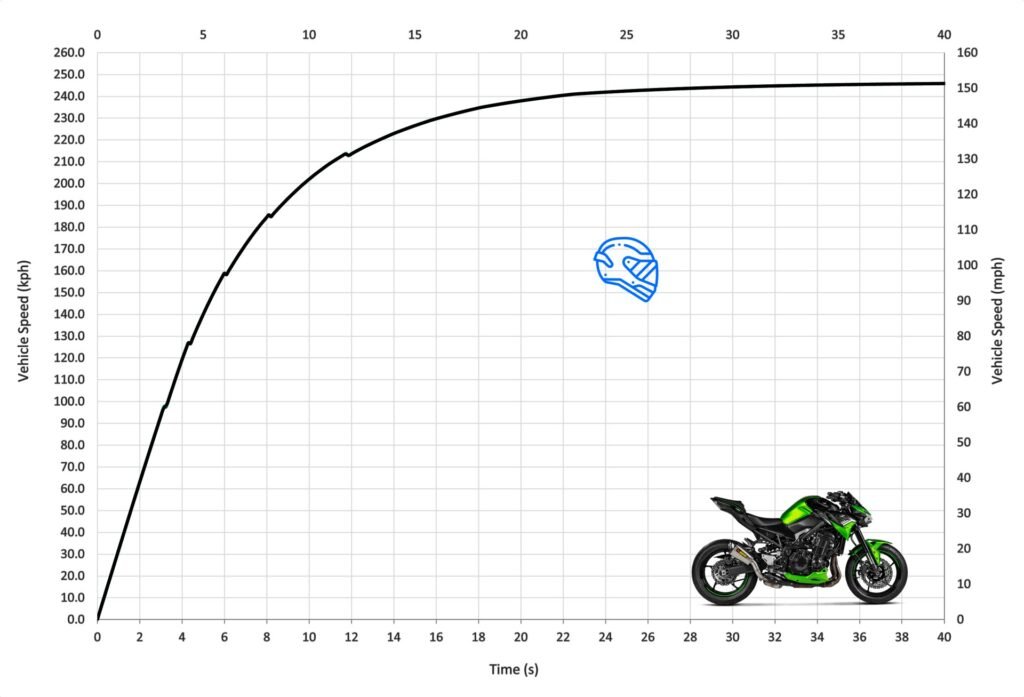 Kawasaki Z900  Acceleration through the gears

Kawasaki’s Z900 is a bit of a dragster with its 110 rear wheel horsepower being put to good use.

This kind of power with good gearing does make for a great balance as enough power to lift the front but not enough to hinder acceleration from the dig.

The Z900 charges hard to 100 mph which it manages in only 6.20 seconds which is good for the class and quicker than most Supersport 600 cc motorcycles.

The 0 200 km/h benchmark that many powerful cars are measured against arrives in 9.57 seconds for the Z900.

The real-world quarter mile time for a Z900 is low elevens at around 125 mph but if you are at the pointy end you can expect 10.89 seconds and trapping 129 mph which means that the Z900 will duff up most 600 Supersport bikes to the quarter mile or from 0-130 mph – whichever comes first.

The Z900 is not about top speed as it’s a naked bike after all, and it is geared for exceptional in-gear acceleration!

But if you must you’ll see a top speed of 153 mph on the Z900 right at the redline in sixth though you better be pretty small and in an excellent tuck.