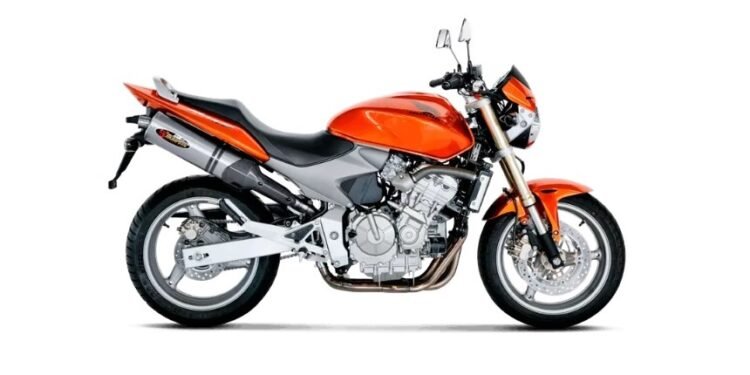 Honda’s first-generation Hornet ran from 1998 to 2006. It was hugely successful pretty much in all markets that it was sold in.

It primarily competed in the middleweight entry-level naked class of motorcycles with rivals of the time being the Suzuki SV650 and Bandit 600 along with the Yamaha Fazer 600 to name just a few.

Like its competitors, the Honda CB600F Hornet was made from similar ingredients – that being a powerful and lightweight machine that is easy and fun to ride for new and experienced riders while offering great value for money. 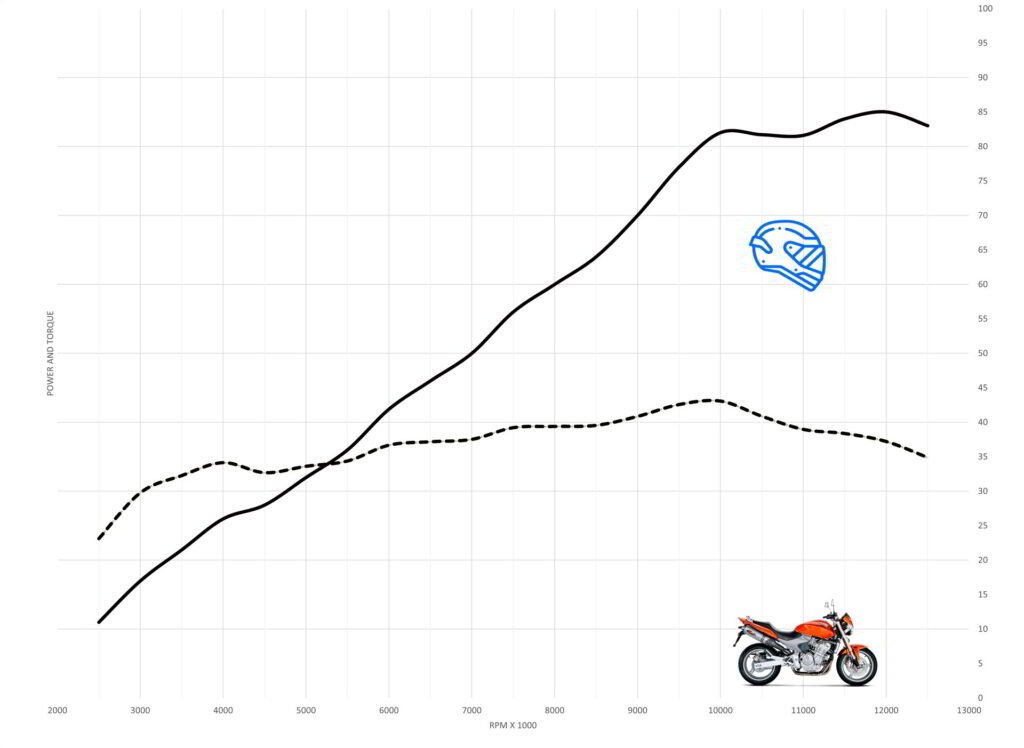 The CB600F Hornet is powered by an engine donated from Honda’s hugely successful and legendary CBR600F, which at the time was Honda’s flagship Supersports motorcycle.

It’s an engine with a long lineage and a great reputation for offering exceptional performance and reliability.

The F3 CBR600 was to be replaced by the F4 in1999 which was a totally new bike with a heavily revised engine.

I guess Honda had some spare F3 engines laying around and some old CBR900RR wheels that they mated to a spine cradle chassis and bang here we have a Honda Hornet 600.

Originally the F3 CBR600 engine had 105 horsepower claimed at the crank and 48 ft/lb of torque.

Honda gave the Hornet 600 a slight retune for its new more road-going focus.

There were some variations in the claimed power and torque figures between slight model changes throughout the lifecycle of the Hornet as well as between America and Europe but the differences are insignificant. It was the same rev-happy F3 engine many adored in the CBR600.

When measured on a rolling road peak power is a respectable 85 horsepower and 44 ft/lb of torque. It gives away around 7 horsepower to the F3 CBR600 peak horsepower at the rear wheels.

The power curve looks pretty similar between the two with the main difference being that from 10,000 rpm after the power plateaus off a little until it hits the 13,000 rpm or so limiter.

Perhaps this flattening of the power is a result of the smaller 34mm Mikuni carburettors in feeding the Hornet fuel as opposed to the larger 36 mm in the F3.

The F3 CBR600 was good enough as it was, Honda should have just left it as is.  The Hornet was directed at more inexperienced riders so 10 horsepower let might have been for that reason among others.

Despite the above, the Honda Hornet 600 engine delivers. The power curve is also nice and smooth which is quite typical of most inline fours and especially Hondas.

That little bump in torque you see at 4000 pm followed by the little dip is noticed but from there on power just builds in very linearly right up to 9000 rpm where the engine becomes a little more intense as it drives enthusiastically to 13,000 rpm on the tachometer.

It’s a fast engine from 9000 rpm but up against rivals of the time such as the Fazer 600, the Hornet does lose out a little in the midrange and bottom end.

The engine power delivery and character is definitely more in line with a Supersport 600 than say the Fazer 600, which delivers its power in a more grown-up and less frantic fashion.

Which is better is really up to the rider, though objectively most would agree that the Hornet engine is the most exciting in the class. 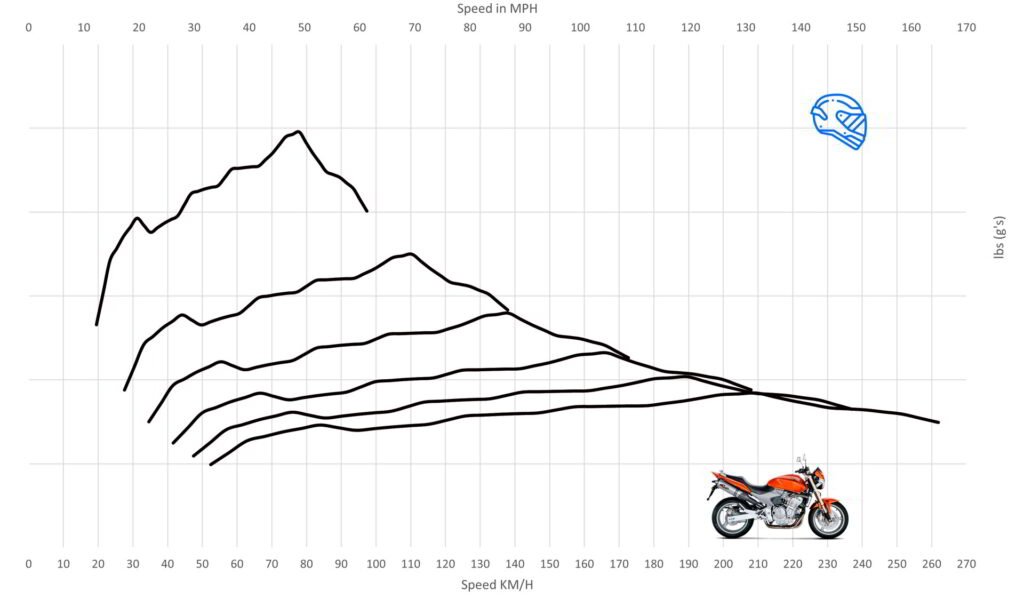 The Honda CB600F Hornet is geared a little longer in all gears except second and third gears than its main rival the Fazer 600. The Hornet also produces a little bit less power and torque throughout the entire rpm range.

Compared to the Fazer 600 and the SV650 the Honda Hornet engine needs to be worked a little harder in all most situations.

Even in isolation and without direct comparison to other motorcycles, if riding in normal circumstances the tachometer needs to be showing at least 6000 rpm before there is any decent drive in pretty much all gears.

If you are riding spiritedly then no lower than 7000 rpm is advised, and if you are really on it and chasing those lap times from traffic light to traffic light, where possible 8500 rpm and above is where you want to be,  which is where Honda Hornet 600 accelerates with a ton of eagerness as it howls like a little F1 car.

As per the 600 cc Supersport roots, from 10,000 rpm onward you do expect the power to continue charge but things level off and you’re then looking to change up at around 12,500 rpm. On some good twisty roads, the Hornet and its engine are very playful and good fun to use. It rewards you the more your thrash it and work the gearbox to keep it in that sweet spot where the most drive is.

In more sedate normal riding situations as mentioned, there is not as much drive as some rivals but certainly, enough to get regular rod duties such as polite overtakes done.

Though it would be nice if there was a little more!

70 mph shows around 5400 rpm on the tacho if in top gear where there is enough acceleration available but hooking down a gear or two is preferred when in a hurry.

Otherwise, you’ll have to wait till around 80 mph before the turbine starts to spool up and deliver some good acceleration. 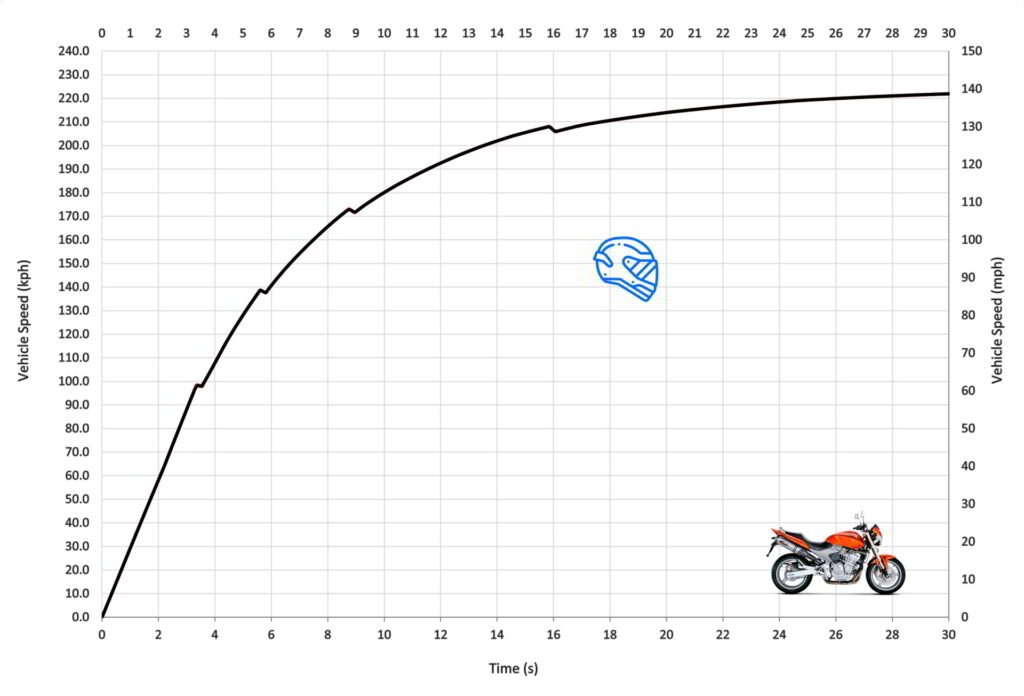 Honda Hornet 600 acceleration through the gears

Motorcycles in this middleweight naked class are not meant to set speed records and nor is their speed the main reason why people choose them.

In staying that, potential buyers are very interested in the engine performance and straight-line speed, not just in practical circumstances but also when you’re having fun.

You want to know if you’re bike will at the very least be able to keep your friends in sight when the talking stops and the racing starts.

The little Honda Hornet 600 is a quick bike but as already pointed you have to thrash that 599 cc inline-four a little more than rivals.

It has enough straight-line performance, at least below 100 mph to keep even the fastest motorcycles within preying distance.

It’s only when speeds get silly that you’ll get dropped by more powerful motorcycles.

Lightness is also a part of the reason why motorcycles are fast and the Hornet lightweight does help it get a move along when maybe you’re caught out in the wrong gear.

While its engine might lose out a little in the bottom and midrange to the Fazer 600 and SV650, up top it’s among the strongest in the class.

Thrash the Hornet 600 through the box and use that upper rpm from 9000 rpm and it moves.

If you are a skilful rider, you can pretty much smoke most cars and bikes from the lights.

The combination of 85 horsepower, low weight and a first gear that can actually hit 60 mph is a good combination for a great 0-60 mph time

You can actually have too much power for a great 0-60 mph run, 70-100 horsepower in a lightweight motorcycle is very effective.

Add to the fact that the Hornet 600s clutch is light and provides a good progressive feel.

This bike can be launched well and crack consistent times one after the other without any complaints or drama.

There is also a fair bit of squat at the rear when hard on it in first gear, minimising wheelies when getting really aggressive from a dig.

It is important though to really slip the clutch at high rpm, no lower than 9000 rpm for the best times.

If you let the rpm drop with inefficient clutch slip rpm can easily fall off a cliff and it can bog a little screwing your time.

If you get it launched well and as described, it is important to rev out first right to past 12,500 rpm. Changing into second gear before will mean that you won’t hit 60 mph in first and will ruin the ET with an unnecessary gear change.

Once into second gear, 12,500 rpm upward changes from there on will net you the best times, any sooner and times will be fractionally lower.

Get the launch down, and the two consecutive changes nailed and the Hornet will do  0-100 mph in 7.57 seconds and a little after s it drives hard through fourth gear to achieve a 0-200km/h in 13.39 seconds!! 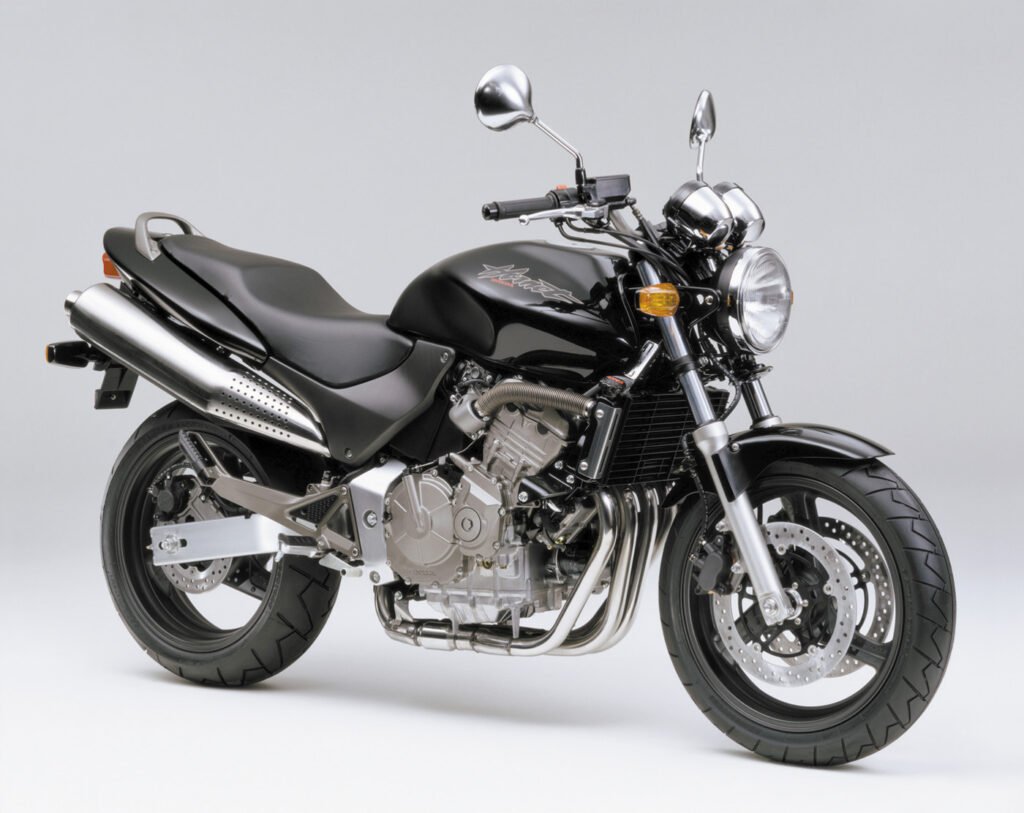 The above time slots in a little below the average Supersport 600 at about a 0.8 slower and a 10 mph lower terminal speed. It’s still a great time and faster than plenty of sports cars and still one of the fastest in-class more than 20 years on.

Being a naked motorcycle and having a modest 85 horsepower, means that acceleration from 120 mph the Hornet 600 starts to relent a little and concede to the elements.  Still, the Hornet’s 0-130 mph time of 17.27 seconds is not to be scoffed at.

We have the naked Hornet 600. There is a semi-faired version with a decent-sized windshield that has a little more up top thanks to the protection it provides to the rider from the elements.

This model is also a little quicker accelerating from 120 mph to flat out fractionally.

Despite the completely unprotected cockpit the fully naked Hornet 600 still manages 139 mph which is faster than a CB650R.

There was no need to hook sixth gear as fifth gear is good enough for a top-speed run. The 600 Hornet actually went slower in sixth gear, as rpm dropped and it just sat there with not enough power or aero to push past the wind.

Honda could have run a larger rear sprocket and top speed would not be negatively impacted, but acceleration in-gear would have been improved greatly, and it would have made up for the lack of bottom and midrange power which is where the Hornet 600 lags against some rivals.

The faired version of the Hornet is good for low to mid 140s mph, yet both motorcycles are geared at the redline to be good for 165 mph plus but will never get there unless with the kind helping hand of a massive tailwind while charging down a steep decline.

If you are 55 kg and very short, you might get a little closer to that in normal conditions, but not the average-sized rider.