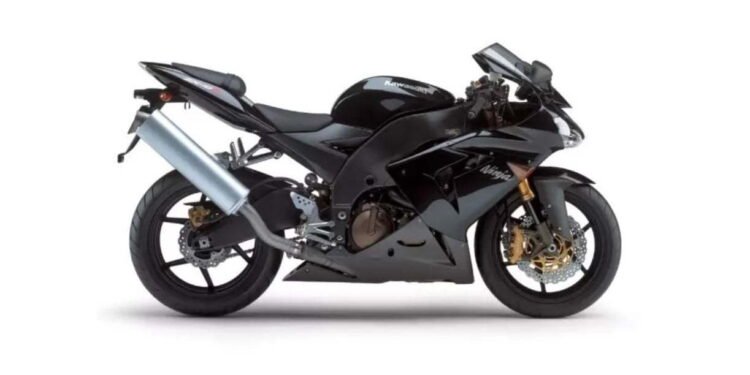 Kawasaki like some other Japanese brands was a little late to the fully-fledged 1000 cc Superbike class.

Yamaha already had a 1000 cc Superbike for many years but it was a little long in the tooth and more ‘Sports Tourer’ than Superbike.

So they decided to rattle the whole Superbike class with their new 1998 Yamaha YZF-R1.

The other brands started to follow, updating their existing models or bringing out new ones tho they still lagged behind the YZF-R1 until the K1 GSX-R1000 arrived.

During this time Kawasaki was running with their old but very capable ZX-9R.

The Kawasaki ZX-9R is a fast machine and made for a great road bike but it was not sharp on the track.

It was still super fast in s straight line and traded blows with the R1 and CBR 954RR  but its 899 cc engine did not have the grunt of competitors and only could trade blows up top.

In 2004 Kawasaki did not hold back and released a monster of a motorcycle upon the world.

During this time Kawasaki was a couple of years into their MotoGP campaign and their new ZX-10R could have easily been sold as a MotoGP replica as is how striking the resemblance is.

From its aggressive lines and large ram intake, the DNA passed on was plain to see. 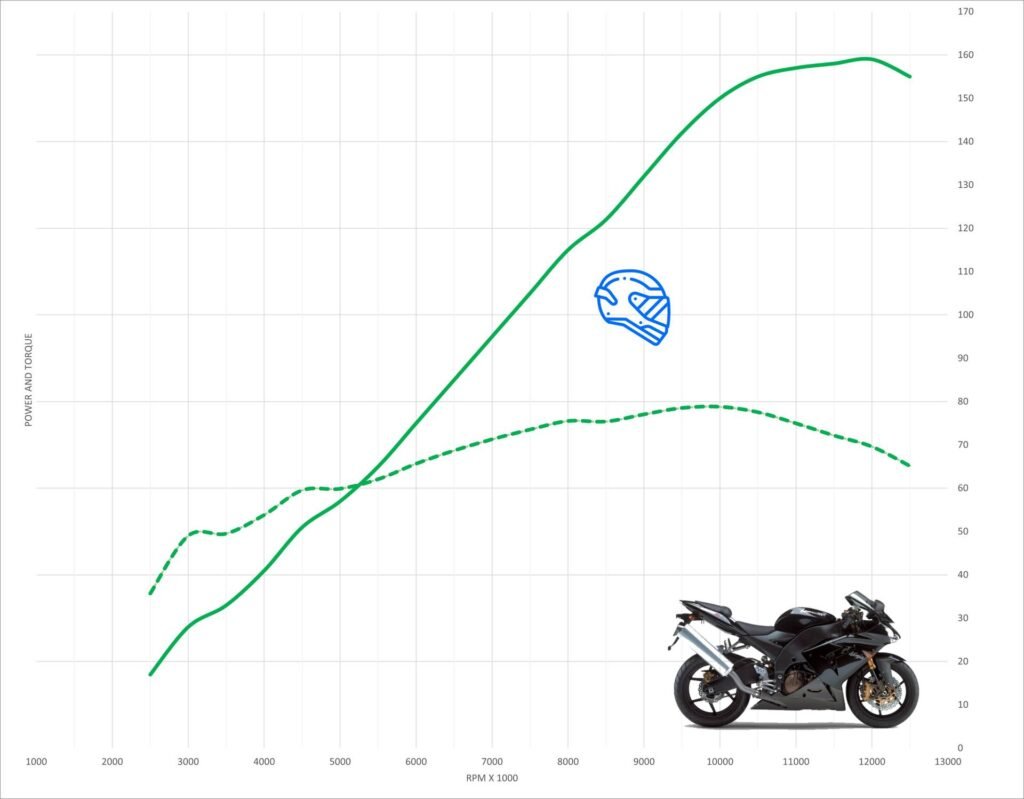 Arguably the new Kawasaki ZX-10R was the first production motorcycle with a 1000 bhp plus per tone power-to-weight ratio.

Back in the day manufacturers claimed dry weight figures for their motorcycles. So that often meant, no fuel, oil, or battery.

Today manufacturers now claim curb weight for their motorcycles, so this makes the on-paper headlines a little less bonkers.

The dry weight claimed from Kawasaki was 170 Kilograms.

Based upon the old way of measuring, this is how Kawasaki arrived at the  1000 horsepower plus per ton figure, or 1 horsepower per 1 kilogram.

In reality, and by today’s standards the ZX-10Rs power-to-weight ratio falls short if we consider the curb weight, which is probably around 195 kilograms or thereabouts.

Either way, the numbers are crazy and even by today’s standards even in a world occupied by 200 plus horsepower motorcycles.

At the time these impressive numbers were right up there and beat out the K3-K4 GSX-R1000 and traded blows with the new (at the time)  K5 GSX-R1000 and Yamaha YZF-R1.

That big power and torque are delivered in a very smooth and linear fashion that gradually builds.

Kawasaki’s Superbikes for many years and even to this day share very similar power and torque deliveries!

The engine is very impressive but does lack a little low rpm drive compared to its peers of the time as well as some rival Superbikes that came before it.

On the Dyno, the 04-05 Kawasaki ZX-10R was often the second most powerful with the K5 GSX-R1000 haven the edge on more occasions when measured together on the same day.

There is good rive from around 4500 rpm but the ZX-10R engine works best from 7000 rpm and above where it delivers monstrous power.

Compared to the outgoing Kawasaki ZX-9R,  the 04-05 ZX-10R engine completely dominates it over the entirety of the rpm range and produces around 30 horsepower more at peak. 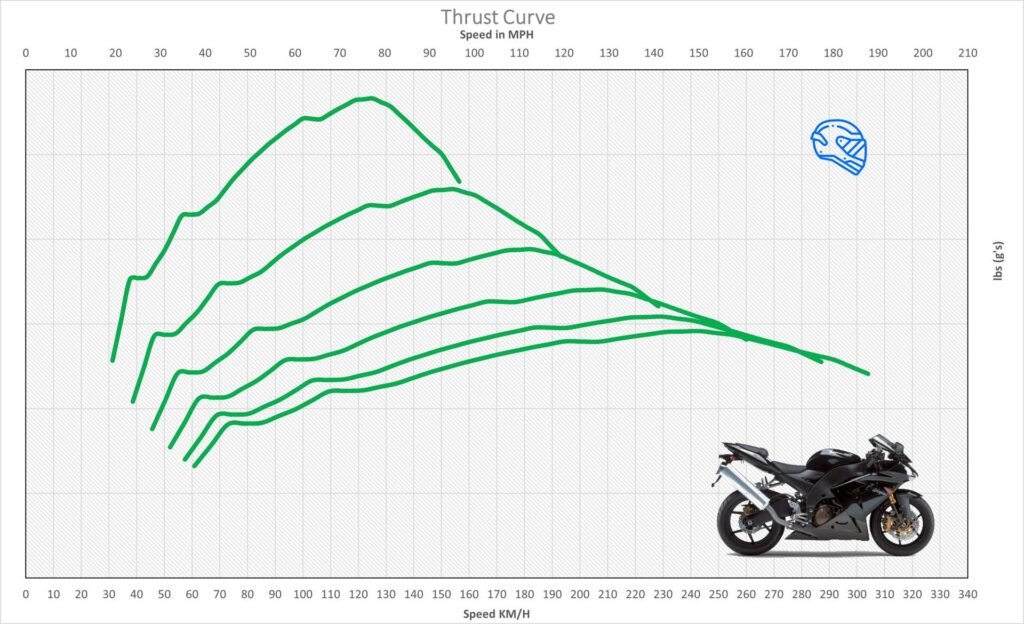 The 04-05 Kawasaki ZX-10R has exceptionally long gearing and can almost reach a real 100 mph in first gear and 125 mph in second gear.

The graph above shows in-gear thrust plotted against speed. This is the actual thrust delivered to the wheels in each gear once the engine torque is delivered through the gearbox and to the rear wheel.

The more thrust the more acceleration when you twist the throttle.

The 04-05 Kawasaki ZX-10R offers fantastic thrust n all gears but not class-leading!

This is simply because it does not produce as much power and torque at lower rpm compared to some rivals while the gearing is on the longer side in the class.

Kawasaki did not have to gear the 04-05 Kawasaki ZX-10R as high as they did though I am guessing their choice was more with the race track in mind rather than the road.

It could also have been something to do with the monster power and very lightweight of 170 kg, and the fact that the 04-05 Kawasaki ZX-10R is a very frisky motorcycle.

So, having longer gearing kept things just a little less lively.  Remember back in 2004 superbikes were analog. So no wheelie control or TCS to keep things in check.

The 04-05 Kawasaki ZX-10R might produce on average less thrust than the K5 GSX-R1000 in each gear but on the road, it feels just as explosive.

It must have something to do with the taut chassis and geometry. It’s extremely rapid and will lift on the power easily in second gear, and even third gear just like the K5 GSX-R1000

Down low though rivals other than the 04-06 YZF-R1 have the edge,  though once the 04-05 ZX-10R is in the second half of each gear and around the 7000 rpm point, acceleration available and response is ballistic!

Regardless of how much power and torque the 04-05 ZX-10R has,  or what the thrust curves say, in the upper midrange and top end where the 04-05 Kawasaki ZX-10R is strongest, it feels faster than rivals and matches the K5 Suzuki GSX-R1000.

Just like any litrebike you really don’t have to worry about what gear you are in, so overtaking on the highway in top gear is effortless.

If you wanted to, just for fun you could use first gear and blast from 70 mph to 100 mph, but the job would be done in sixth gear faster than changing down to first gear.

Oot on country roads the 04-05 ZX-10R is like a big scooter. The long gearing and decent drive mean that second gear has you covered for the vast majority of country roads.

It’s only when rpm drops below 4500 rpm that there is just a little bit of lag in acceleration but there is enough to get you out of a corner quickly, and then once rpm is above 4500 rpm whap speed starts to pile on quite rapidly. 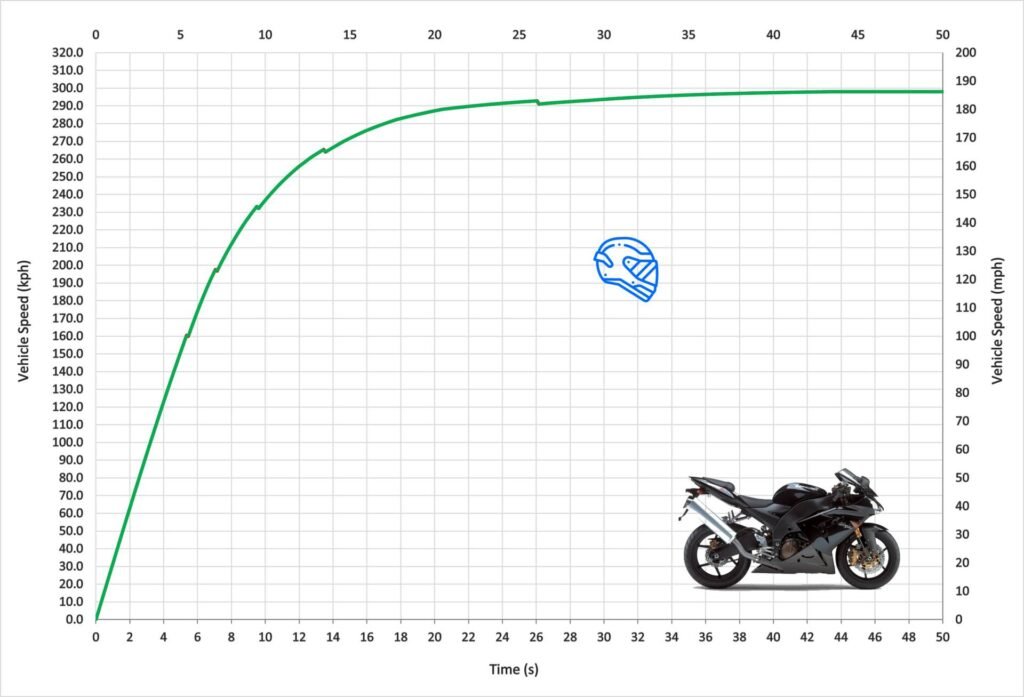 The longer gearing actually helps a little as it can take the edge off and allow the rider to get harder on the gas. The ZX-10R of course will still wheelie effortlessly in first gear though the extra length of the gear does help.

Having such long gearing can also help with ETs as it often means fewer changes to reach any particular speed.

Sometimes a specific acceleration benchmark can be hindered due to an unwanted gear change right before you hit the target speed. For example, many motorcycles need second gear to hit 100 mph, the 04-05 ZX-10R can hit a little over 100 mph in first gear and doesn’t need to change into second gear and lose time in the process.

The gen 1 ZX-10R is a very small and compact motorcycle and does not offer great protection from the elements. Even though its top speed is very impressive at 185.2 mph which it will achieve in a little over a mile from a standing start.

With the to speed restrictions removed, I have little doubt that the ZX-10R will hit the limiter in top at over 195 mph.