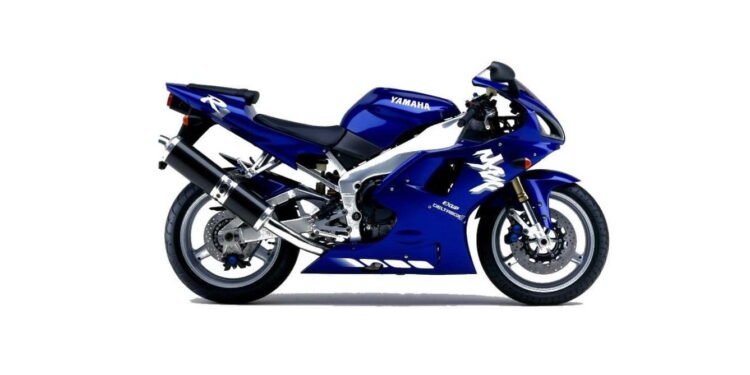 At the time of writing 23 years have gone by since the original 1998 Yamaha YZF-R1 was launched. It created quite the stir and was, and remained a massively significant motorcycle to this day.

What made the 98 R1 such a showstopper was that it offered open-class power packaged in an extremely lightweight Supersport handling chassis.

Prior to the Yamaha R1 in the ‘Superbike’ class, we had Honda’s CBR900RR which was top dog (although technically not a Superbike) but it was mainly competing against motorcycles that were 750 cc.

Motorcycles such as the Suzuki GSX-R750, Kawasaki ZX-7R and the YZF750 were actual Superbikes of the time based upon the WSBK  capacity rules for inline 4s.

The CBR900RR’s other main competitor was the ZX-9R which then would have been the straight-line king of the sub 900 cc motorcycles but again it was largely heavier and had worse handling perhaps until the 1998 revision that brought it more in line with the CBR900RR in terms of its handling credentials.

There were other litre or litre plus motorcycles such as Yamaha’s very own YZF1000 Thunderace and Suzuki’s legendary GSX-R1100.

We also had Hyperbikes of their day such as Honda’s CBR1100 XX Blackbird and Kawasaki’s ZZR1100 but all of them while faster in a straight line were heavy and not nimble and could never be considered Superbikes in the same way that the 750s were (which were literally Superbikes) or the CBR900RR which had basically all of the qualities of the 750s; such as lightweight, good handling chassis and brakes but with a larger and more capable engine.

Due to the (at the time) current shape of the high-performance motorcycle market in the mid-90s, the CBR900RR enjoyed huge success.

Arguably from an all-around performance perspective, it was the 1996 variant of GSX-R750 that would have been snapping at the CBR900RRs heels as it made comparable peak power and was arguably better handling but the engine and ergonomics were much more geared up for track and not the road.

The CBR900RR engine while similarly fast had significantly more mid and bottom-end power and torque making it much more usable on the road and in real-world situations requiring fewer gear changes and thrashing to the limit.

The introduction of the Yamaha YZF-R1 massively changed the 750-900 cc class and also tipped the open class on its head as the 98 R1 brought Superbike handling with open class engine performance not to mention killer looks which today still look very modern. It was a recipe for huge success.

The Yamaha R1 had an all-new 20 valve 998 cc engine that made a claimed 150 crank horsepower while packaged in a bike weighing only 177 kg dry.

In terms of dimension, it was smaller than any 600 cc Supersport at the time. To this day the original R1 is lighter and more compact than many current motorcycles and depending on your sources is 2kg lighter than the current Yamaha R1 model.

The engine had a stacked gearbox which was the first of its kind and is a gearbox design choice that has since been adopted by many manufacturers since.

The idea of stacking the gearbox was to shorten the length of the engine meaning that Yamaha could use a longer swingarm than was possible with a conventional gearbox layout. Having a longer swing arm meant that the bike could still have a short wheelbase (1395 mm) for nimble handling while minimising the effect of wheelies that often result from high-power short-wheelbase motorcycles.

The R1 was a wheelie beast so not sure how effective this was but we must remember that the R1’s wheelbase was extremely short, and it had much more power than what was ever applied into such a lightweight package.

Perhaps it would have wheelied even more if running a conventionally lengthened swingarm. Who knows though the technology obviously has merit today as stacked gearboxes on four-cylinder engines are commonplace.

Once measured on a dyno and taking into consideration the typical 10-12% loss of power from the crank to wheels the 1998 Yamaha R1 made around 130 to 135 horsepower.

In the magazines of the day there were some making more than 140 hp but typically today a low mileage R1 of this vintage will make around 135 horsepower if a healthy specimen.

135 horsepower may not sound a lot by today’s standards and in a world where litre bikes now make 180 to 200 horsepower at the wheels!

Do not be fooled though as we have to consider this number in the context of the time but even then a 1998 R1 will still impress today even if you have just gotten off of a new litrebike and straight onto the 98 R1.

Motorcycles of this vintage had no throttle or electronic restrictions softening them up. If you asked for 82 or 100 % from the R1 you’d get exactly what you asked for. This made the motorcycle feel so keen and responsive.

The ZX-9R was closest in terms of peak power but was generally around 5-10 down at peak and made much less throughout the rpm range.

That peak advantage might not sound a lot but the R1 was at least as light as the lightest of its competitors (GSX-R750) and a fair bit lighter than some of the others.

The main thing that made the R1 engine so impressive was the sheer amount of grunt it made throughout the rev range while also being matched to low gearing that really complemented the engine’s output characteristics. 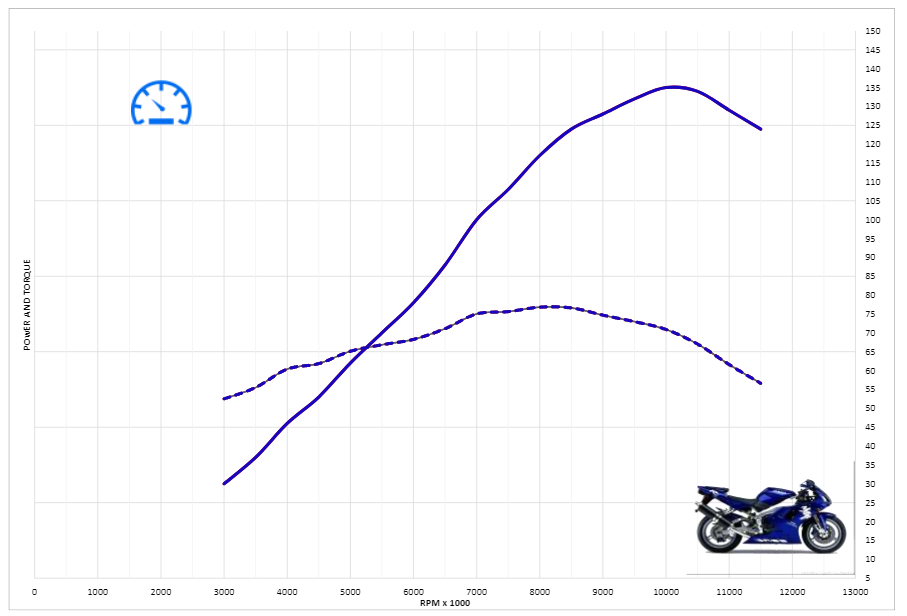 The 98 R1 was very much the roll-on king. You could put it in top gear at 30 mph and in what seemed like a few seconds it would launch you to over 100 mph. Even today the R1 can beat many current litre bikes from a top gear roll-on from any speed under 100 mph.

To put the 98 R1 engine into context, look-see via the below dyno curve how it stomps the CBR900RR into oblivion. 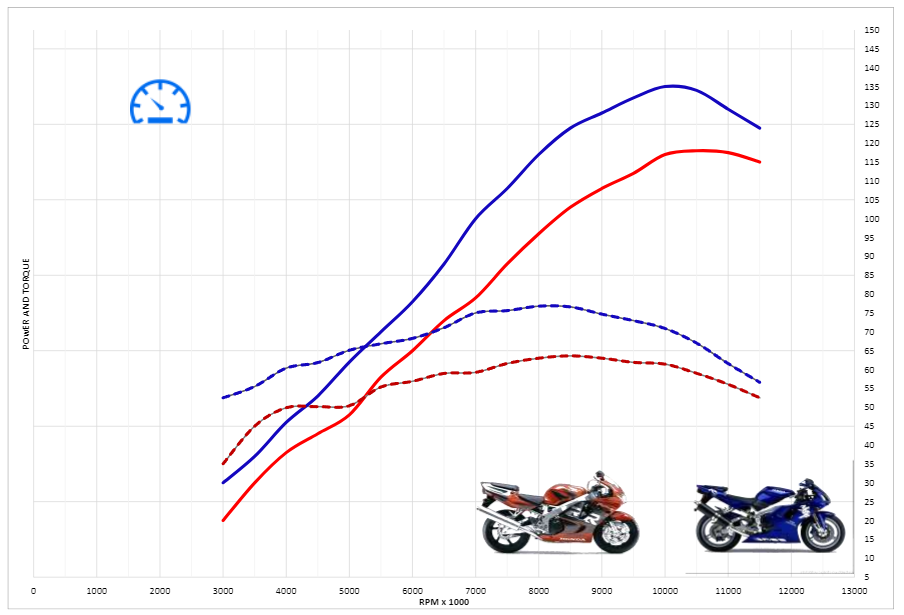 It is pretty obvious just by comparing the two graphs just how great the 98 R1 engine is. Sure, other litrebikes and even Yamaha’s own Thunderace were similar but that motorcycle weighed almost 30 kg more and used a five-speed gearbox.

GSX-R1100s and others were even heavier, some 50 kg more than the 98 R1 which impacts performance significantly

. Never had there been an engine of this output been gripped by such a light and nimble chassis package.

It just dominated on the Dyno.  This resulted in the 98 R1 being a much faster-accelerating motorcycle outright, as well as in-gear acceleration being significantly more explosive which is demonstrated via the below thrust curve that shows in-gear acceleration/thrust in each gear plotted against road speed. 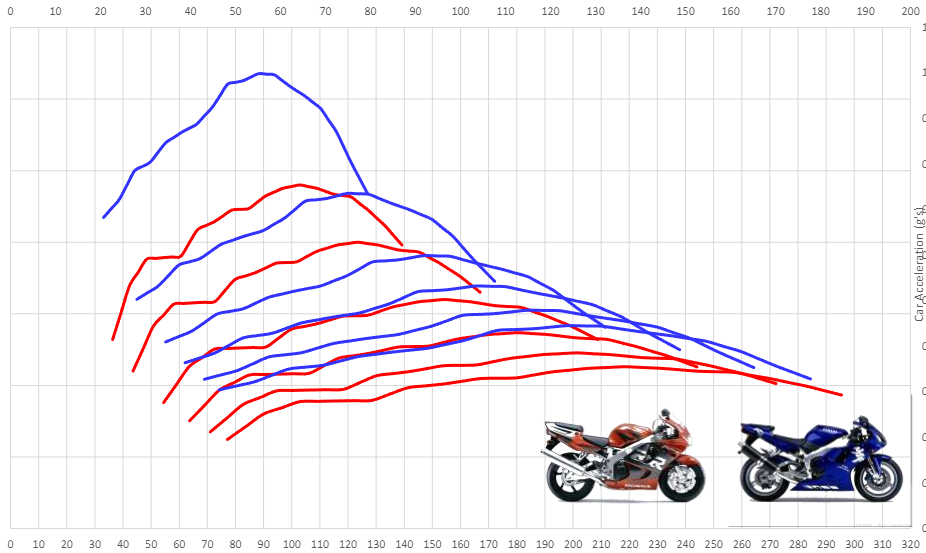 By studying the above thrust/acceleration curve it is very plain to see how dominant the 98 Yamaha R1 engine is. There is not a speed in any gear where the 98 CBR even gets close let alone beating the 98 R1.

The 98 CBR’s first three gears are slightly lower than the R1 but third gear, fourth gear and fifth gear are longer.

Honda did not need to gear their 98 CBR900RR so long as it has no chance to reach the limiter in top gear. I guess that they did not have to as despite long gearing the motor still had the torque to dominate the 750s but not the R1. 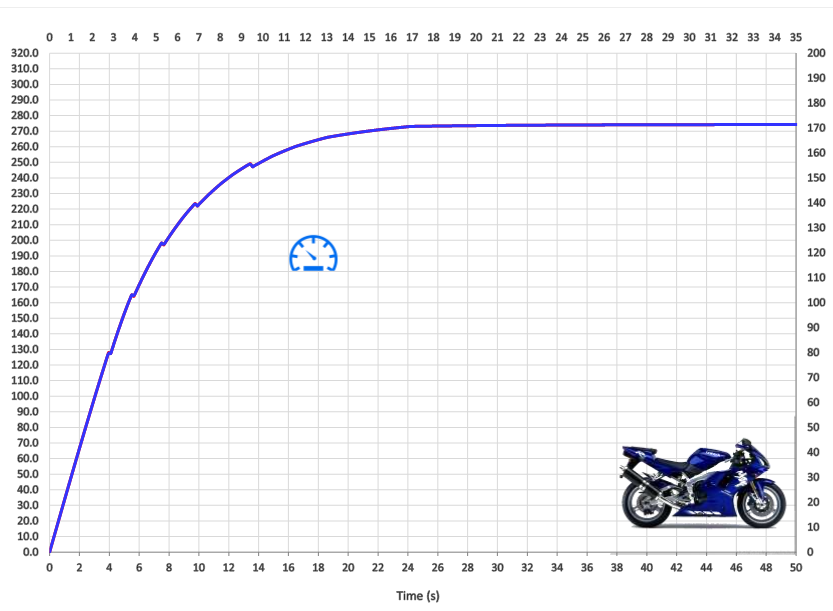 The moment the R1 came on the scene in 1998 it instantly became the fastest accelerating production motorcycle on the planet at least up until around 160 mph.

It was even more accelerative than the (arguably) at the time fastest motorcycle which was the Honda CBR1100XX Super Blackbird.

Or if you are a Kawasaki fan you may argue that it was the ZZR1100 that was actually the fastest. Either way, the R1 made similar power to these two machines but was significantly lighter carrying 40-50 kg less weight.

The Blackbird only had the advantage right at the top and above 160 mph because of more efficient aerodynamics and a screen and fairing more capable of keeping the riders’ bits out of the wind.

It was only the introduction of Suzuki’s Hayabusa in 99 that supplanted the R1 as the most accelerative motorcycle.

The 98 R1 is not the easiest to launch as with a relatively low first gear and heaps of midrange power/torque it loves to lift its wheel.

There was no wheelie or traction control back then but what the R1 does have is fantastic and smooth carburation that with average to good throttle control, sub 3 second times were more-than possible. Some testers even recorded faster times.

From there on the 98 R1 still charges hard to 160 mph but eventually it relents as it hits a top speed of 171 mph.

R1s of this era have recorded higher but with their tiny screen and not the greatest aerodynamics it is hard for the rider to tuck out of the wind.

In the real world, the R1’s low gearing and very torque engine ensure that it will blast from one corner to the next like a rocket.

And these bikes respond very well to a tune where it is not abnormal to see a healthy 145 horsepower at the wheel and more than 80 ft/lb of torque.

The original R1 still impresses today and you would not have many issues keeping up with your friends riding newer metal unless you hit highways and race to 180 mph.  1998 R1 vs 2020