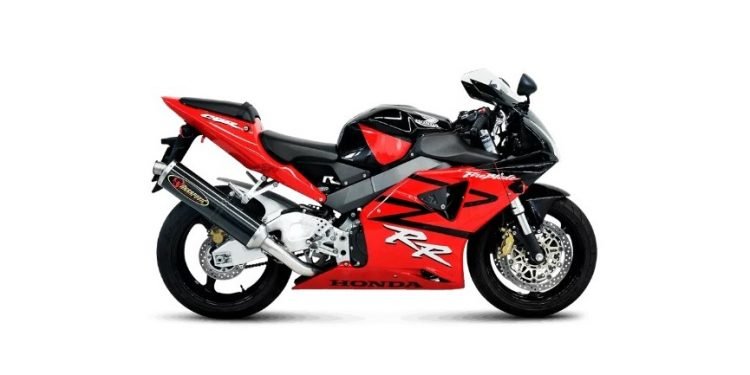 A look at the Honda CBR954RR’s engine performance, top speed and acceleration. 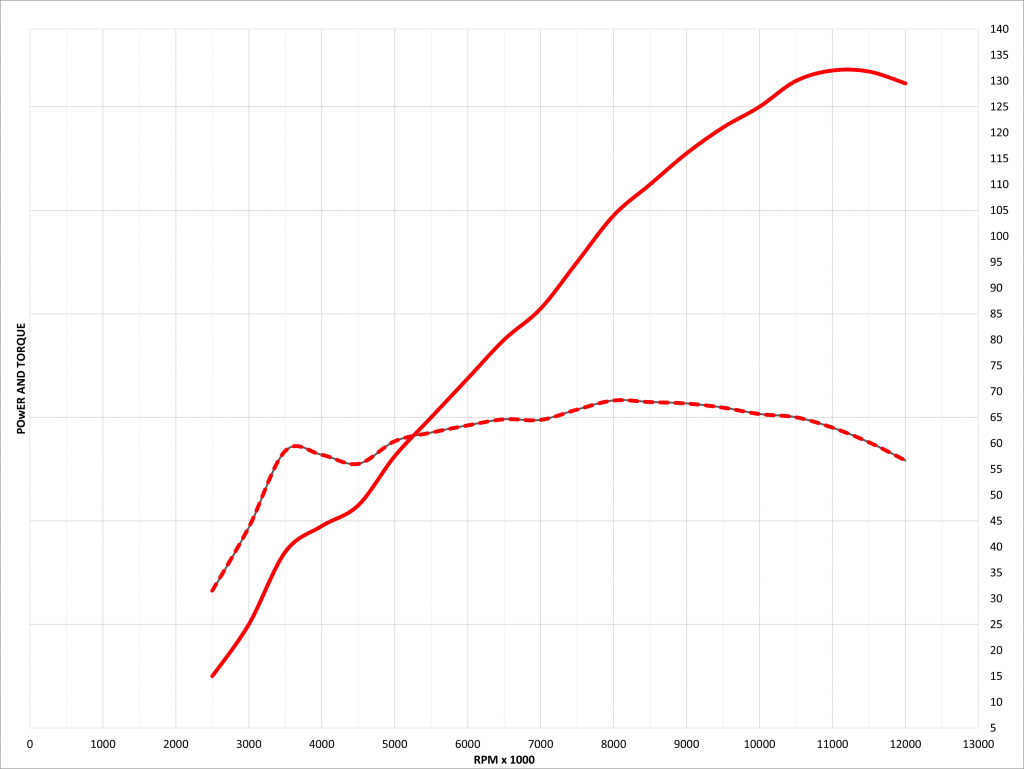 Technically not a litrebike but back in the early thousands the CBR954RR had to contend with in what at the time hugely important and competitive era!

The Honda CBR945RR was up against full-blown litrebikes such as Yamaha’s YZF-R1 and Suzuki’s GSX-1000, both which had a 45 cc advantage.

That may not sound like a meaningful deficit but was enough to ensure that those mentioned had more powerful engines.

The Honda CBR954RR though was very close to the YZF-R1 of the time in terms of peak power but gave away a little throughout the rpm range.

Kawasaki’s ZX-9R had a smaller engine than the CBR954RR at 899 cc, but often made a little more peak power while also having a very effective ram air system that boosted power at speed.

On average among the four bikes, the Honda made the least amount of power when measured on a dyno.

Our example is a healthy one at 133 horsepower at the rear wheels with that peak coming in at around 11500 rpm.

Torque is impressive too at 70 ft/lb at 8000 rpm.  The engine works best above 5000 rpm but the CBR954RR will pull from sixth smoothly almost from tickover.

On the dyno and throughout the rpm range the CBR954RR very much traded blows with the YZF-R1 and beat out the ZX-9R everywhere else except up top.

The GSX-R1000 was dominant and in a league of its own at the time.

Despite the CBR954RR’s engine not being the best on paper, as it was the lightest in class and geared intelligently, the engine packed a big punch, and felt faster than the numbers would suggest.

I would argue that the engine was just a little more potent than the 02-03 Yamaha YZF-R1 of the time. It just felt more aggressive and ready for action.

The CBR954RR’s light weight made a huge difference here.

The power curve is very Honda-like, silky smooth with no surges or power bands, just strong instant drive anywhere you like.

The hiccup at 4500 rpm is not noticed on the road and feels very smooth though the FI is a little jerky if opening from a completely closed throttle as were most early FI systems perhaps with the exception of maybe the 02-03 YZF-R1. 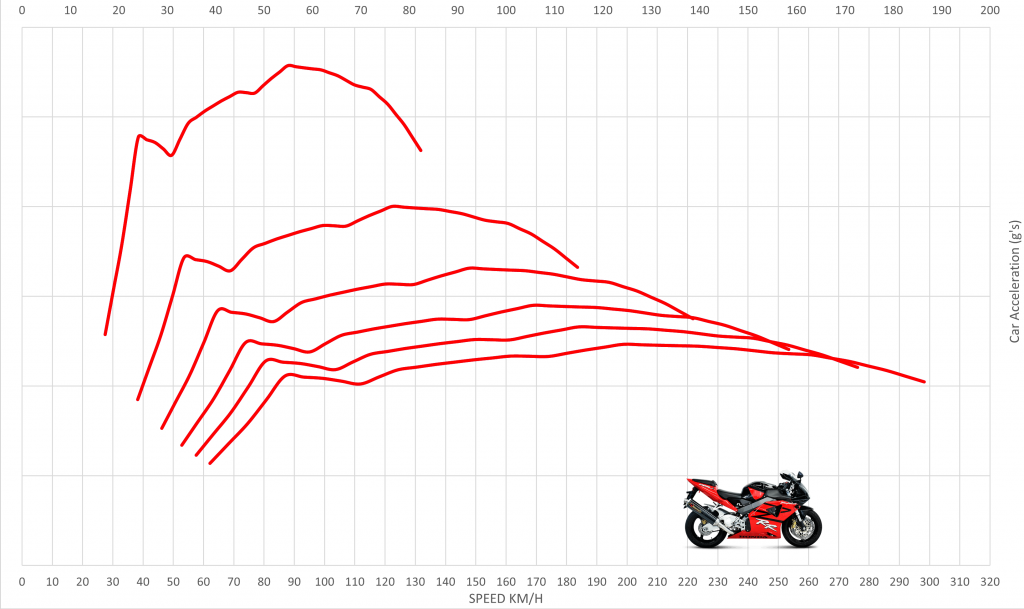 Even in a world of 200 horsepower Superbikes, the CBR954RR feels very lively in all situations on the road. You would not know that it was 50-70 hp down on some bikes 80% of the time.

It’s only when you get the rpm up and above 9000 rpm that you realise that the Honda CBR954RR does not have the top-end punch of newer machines.

But anywhere below the CBR954RR is explosive, and responds instantly.

You don’t need to be concerned about what gear you are in, just twist and the CBR954RR goes with no hesitation and a lot of enthusiasm.

You can also thrash it through the box and not have to be move above 100 mph to enjoy the engine like on some newer Superbikes.

Cruising along at highway speeds in top gear feels like being in fourth because the CBR picks up so well!

So well that to the point that you often second guess yourself while you look for another gear only to find that you are already in top gear.

When looking closer you’ll see that the CBR954RR is geared lower in 5th and 6th gears over rivals of the time.

Add the fact that the CBR954RR is around 10 kg lighter than the nearest rival and you can see why the Honda CBR 954RR really makes use of the power it has for great effect.

This is both true on the road and in any roll-on situation.

Getting on the gas hard and the front will get light, and the bars will wiggle as the front skims over bumps and undulations in the road.

Honda mostly makes sensible bikes but occasionally, they put one out with a little attitude.

The CBR954RR is one of those once every 10 years Honda gems.

Excluding the likes of the Hayabusa and ZX-12R, back in the early thousands the first gen GSX-R1000 was the straight-line king.

The battle for runner-up was between our CBR954RR, the ZX-9R and the YZF-R1.

The Honda CBR954RR was arguably the least powerful of the four, though if excluding the GSX-R1000 the trio were largely similar when push came to shove and only a few bike lengths between them.

The ZX-9R often had the slight edge on top speed against the R1 and CBR954RR but they perhaps had the lead in sub 150 mph acceleration.

Being a 20-year-old motorcycle, you only have only the clutch, your throttle control and rear brake as your rider aids. No TCS, launch control or anti-wheelie.

The CBR954RR is very lively and exciting to launch. It’s very easy to lift in first and is willing in second gear too if over bumps but will settle nicely in third.

Once you tune yourself into the Honda CBR954RR it’s quite easy to launch aggressively.

But you do have to have that rear brake on standby first if you are too enthusiastic with the throttle or clutch when launching hard.

There’s more to come though it requires a more skillful play with the rear brake and getting over the tank even more to pacify its willingness to wheelie.

Better riders could get the blade down to 2.70.

Once into second, it’s not long before 100 mph flashes up in only 5.70 seconds making at least as fast as many newer and far more powerful motorcycles. Quite impressive.

While the Honda CBR954 is still charging hard in third is where the newer motorcycles will start to etch out a lead and start to gap the CBR954RR toward the quarter mile.

Despite this, the Honda CBR954RR respectfully lays down an impressive time and terminal speed of 10.49 @ 139 mph.

Unfortunately, the CBR954RR runs out of rpm in third right up to the quarter-mile line so requires a gear change which hurts its time a little.

After the quarter mile, the CBR954RR is still rapid, even if not as fast as the latest and greatest.

It’s only after 160 mph that the CBR’s acceleration starts to finally relent and after around 30 seconds the CBR954RR will reach its top speed of 172 mph.

These CBR954s can go faster and have topped out at 178 mph plus but not today.