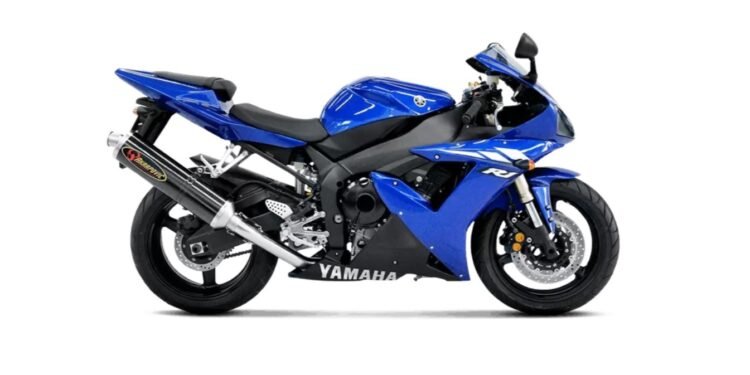 A look at the 02-03 Yamaha YZF-R1s engine performance, top speed, and acceleration. 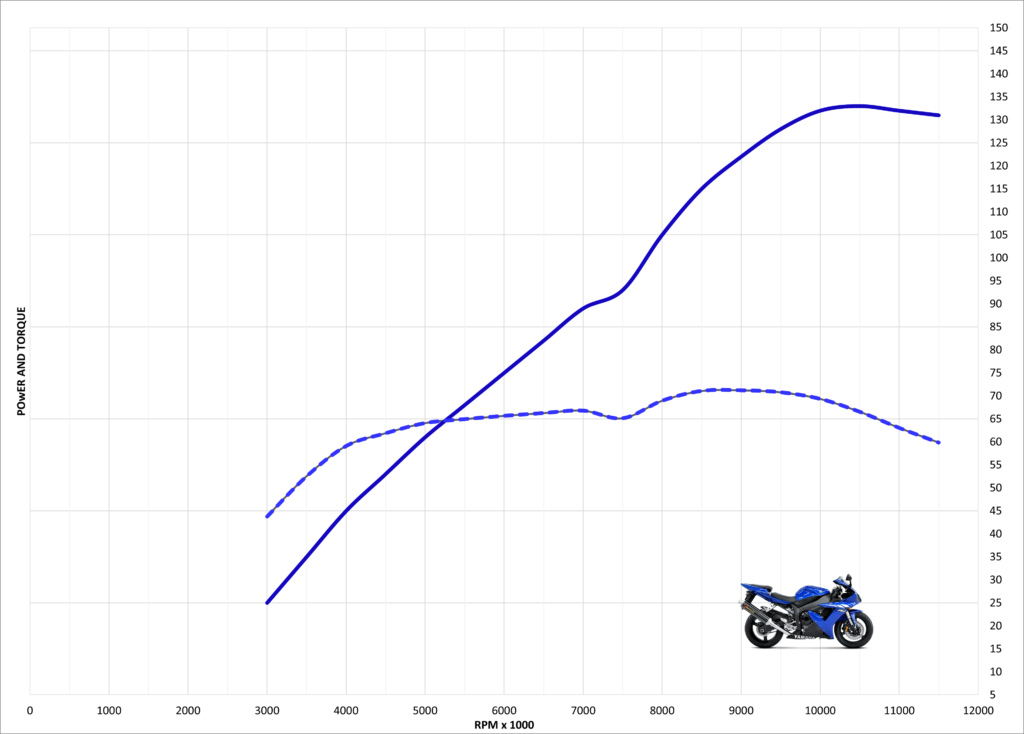 The 02-03 Yamaha YZF-R1 is the third iteration of the first-gen Yamaha YZF-R1. It’s powered by a revised version of the original 1998 YZF-R1 with the most significant addition being fuel injection.

Claimed power from the 998 cc inline-four is 152 horsepower delivered at 10500 rpm which is 2 up on the previous versions and claimed torque at a thumping solid 78 ft/lb at 8500 rpm.

The 1998 YZF-R1 and its engine dominated upon release but was overshadowed and knocked back to second place after the release in 2001 of the first-generation Suzuki GSX-R1000.

Honda also released the CBR954RR in the same year as the 02-03 Yamaha R1 with very similar claimed power figures.

In terms of power and acceleration, the 02-03 Yamaha YZF-R1 was now competing for second or third place instead of defending its crown.

Previous R1’s had chassis that were overwhelmed by the instant power on tap and as a result, was a wild ride.

Yamaha Improved the chassis of the 02-03 model and did soften the power delivery whilst also sacrificing a little grunt in the midrange as described.

Despite this, the engine is still extremely potent though it is much smoother, and power is delivered more linearly than before.

From 3000 rpm to the rpm limiter the delivery is strong but quite flat with no obvious surges as it comes on cam. There is a little dip evident on the dyno graph at around 7000 rpm, but this goes unnoticed on the road.

The little surge after it recovers is also not noticed. Instead, if you drive the R1 in any gear from below and through 7000 rpm all you feel is a linear drive that progressively gets stronger as the rpm piles on.

The engine on the 02-03 model is certainly not wild like the previous versions but does feel a little slower and less willing but most of that is down to it being smoother and more linear than being objectively weaker. 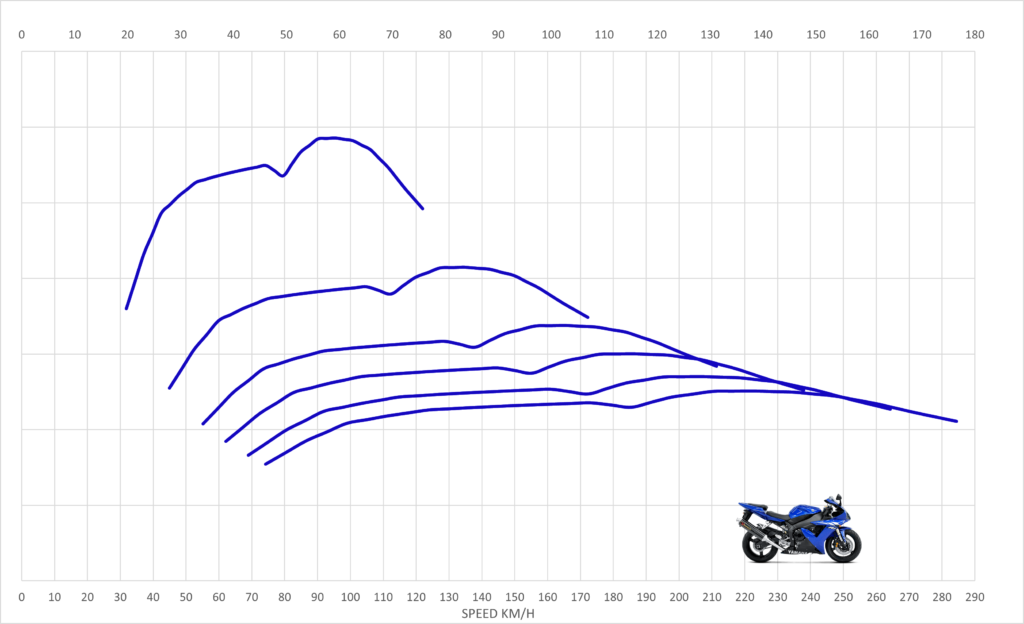 All Yamaha R1s of this generation, their first gears are spicy and hard to use in anger as it will wheelie like a lunatic from as little as 3000 rpm if you crack the throttle abruptly.

First and second gears are quite widely spaced, so if blasting around town using either often doesn’t feel right with first gear being too low and second gear a little too long.

It of course not an issue in normal riding situations but is not as ideal as some rivals when getting a move on.

Once you are up to speed the response from the engine is fantastic regardless of the gear that you are in.

If you are at legal highway speeds the pull-in-top gear from 60-70mph is instant and sometimes you may even think that you are in fourth or fifth gear because the pick-up is so good.

There is very little need to change down a gear in almost any situation, as the motor is very strong everywhere and provides all the grunt that you would ever need for overtakes or blasting from one corner to the next.

If compared to newer Superbikes the 02-03 Yamaha YZF-R1 can offer similar and in some cases better performance below 8000 rpm in some gears.

Still, the 130-plus horsepower top-end is ballistically quick like you’d expect from any litre Superbike. 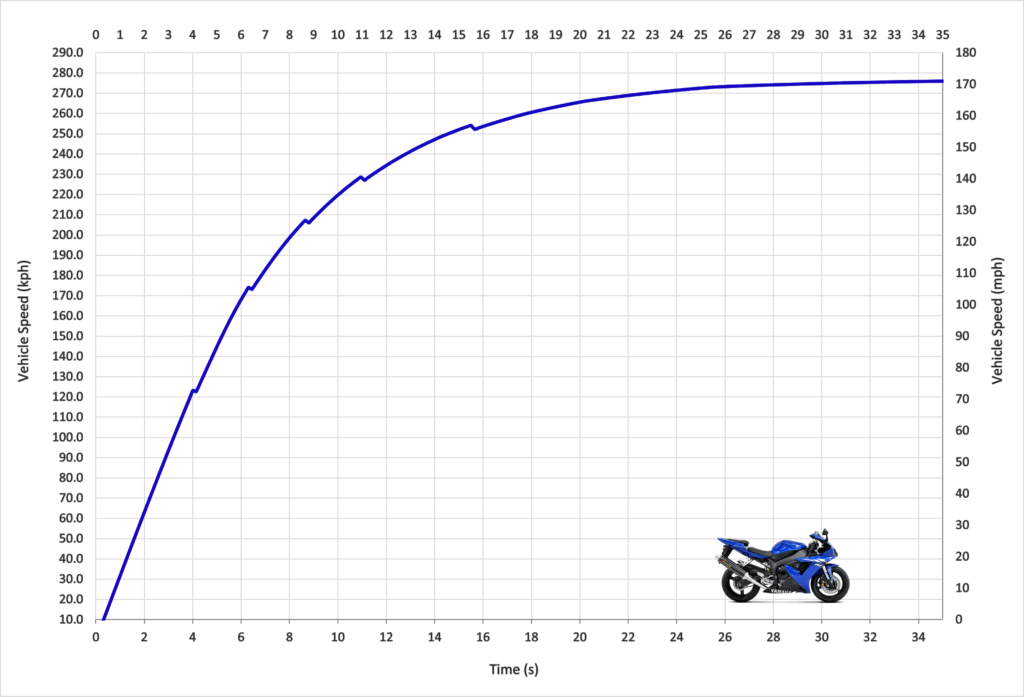 With broadly the same peak power output as previous versions, we can expect similar acceleration times from the 02-03 Yamaha YZF-R1.

Like the original that is not equipped with wheelie control or TCS, the 02-03 Yamaha YZF-R1 does require a degree of skill to get the best ET times. T

his is because, with 130 plus horsepower, lightweight and a low first gear ratio, the 02-03 Yamaha YZF-R1 is very keen to lift at any point in first gear.

You can launch it in two ways, one being a more aggressive clutch dump at around 4500 to 5000 rpm and drive it hard once the clutch is engaged right up to around 11,000 rpm.

Alternatively, you can be less aggressive with the clutch and slip at around 8000 rpm until your speed fully matches your rpm, then nail it again to at least 11000 rpm or as close to the limiter as possible.

The clutch feel is not as nice as some other motorcycles and the gearbox is more clunky and does require a firm kick, especially when changing into second gear if you want to avoid a false neutral.

As with all motorcycles without quickshifters clutchless changes are a necessity, but the R1 gearbox can complain sometimes and not engage the next gear consistently.

Because first and second gear is spaced wide apart, for the best times, as already mentioned you must stretch first right to around 11,000 rpm, then clutchless change into second.

Changing up any earlier will mean your times will suffer as there is no point in second gear where more thrust available than first gear.

If you change into second gear before, say at 10,000 to10,500 rpm you run the danger of rpm dropping to 7500 rpm or below in second gear which is out of where peak torque and thus peak thrust is at.

String it all together and 0-100 mph comes up in a blistering 5.66 seconds which is comparable to most 1000 cc Superbikes of the last 20 years.

This is because the 30-50 horsepower advantage the newer Superbikes have can’t really be realised sub 100 mph.

It’s a little after 100 mph and once into third gear where the 02-03 Yamaha YZF-R1 starts to show its age and horsepower deficit compared to newer Superbikes.

But it still charges extremely hard and a little time after crossing the quarter mile in only 10.52 seconds.

Terminal speed is very good too at 139 mph but is 10+ mph down on the latest Superbikes.

A little after the quarter mile the Yamaha YZF-R1 will crack the 0-150 mph benchmark in 13 seconds flat, a time that even today is very respectable and enough to upset many Supercars past and present.

For the best ETs right through the box, first and second gear should be taken to near/at the redline while the remaining gears should be shifted at around 11000 rpm.

Just like the original R1, the 02-03 model is a very compact motorcycle with a small screen It is even more compact and less roomy than the latest YZF-R1.

It’s quite a slippery motorcycle with a small frontal area but ultimately its top speed is hindered a little due to its dainty size and lack of protection from the elements.

It is better than the original 98 though really is suited for smaller riders who’d get more out of an 02-03 Yamaha R1 right up top, though still a respectable top of 172 mph can be achieved for the average rider.