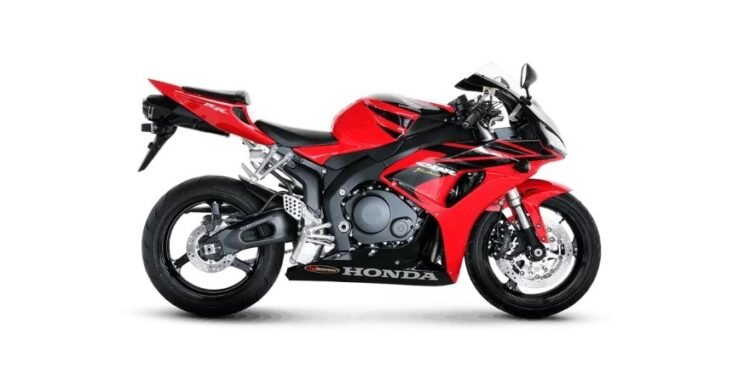 In the early 2000s, the litrebike class was rapidly taking shape and an arms race was quickly forming. 2003 to 2004 saw new and more powerful motorcycles from all of the Japanese brands.

Kawasaki introduced us to the bonkers ZX-10R which was their literbike replacement for the ageing ZX-9R. It was much lighter and way more powerful than the ZX-9R, which is not a slow bike by any stretch.

Yamaha brought us the all-new short-stroke engine 2004 Yamaha R1 that was 20 horsepower up on the model it replaced.

A year before we had a new, more powerful and sharper K3 Suzuki GSX-R1000 was also newly released.  Honda could not compete with this new generation of Superbikes with their CBR954RR despite it being a ballistically fast motorcycle in its own right!

The threat that came from the other brands pushed Honda to introduce a full-fledged 1000 cc CBR Fireblade, which was in response to the more powerful and faster competitors that were popping out left and right.

The CBR900RR was dead, replaced with the CBR1000RR Fireblade.

The Fireblade for 2004 was a brand new motorcycle. It had a new 998 cc 172 horsepower engine that is 20 horsepower up on the CBR954RR, a new chassis and bodywork.

The overall design was reminiscent of Honda’s MotoGP bike at the time. 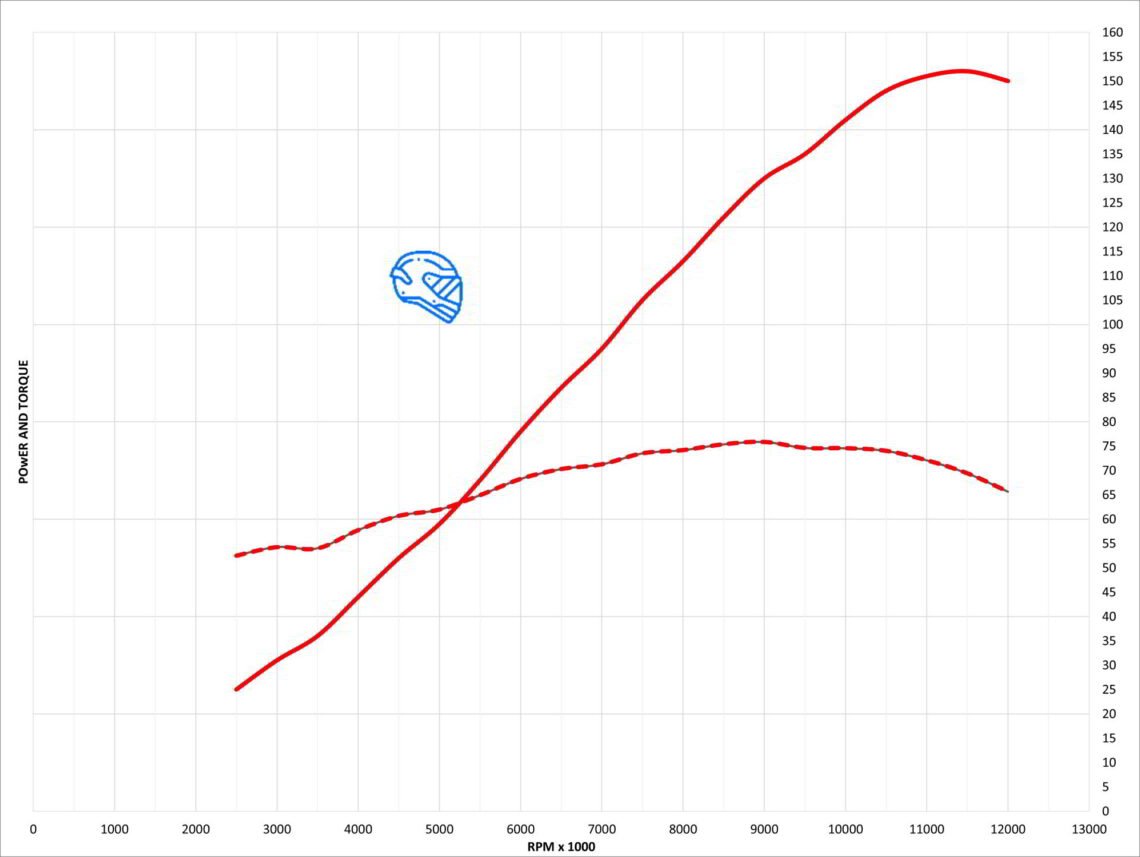 This slightly longer stroke provided the new engine with a capacity boost to bring it up to 998 cc.

Honda’s CBR1000RR has the second longest stroke engine of the current crop of litrebikes at the time, only bested by the Suzuki GSX-R1000.

If we look at the dyno graph we can see a very healthy 152 horsepower provided to the rear wheel at 11,400 rpm, with peak torque arriving a little earlier than Honda claims, with 76 ft/lb at 9000 rpm.

The 04-05 CBR1000RR engine is more powerful everywhere than the previous model but unsurprisingly the graphs do look very similar.

There is a slight fluffy spot at 3500 rpm, where at around 4000 rpm it clears up and power and torque delivery is very smooth and linear right to 12,000 rpm plus.

There are no sudden peaks or troughs, just linea progressive delivery of power which is very typical Honda. There is no powerband as such with the engine providing exceptional drive from as low as 4000 rpm.

From there on it just builds and grows in its intensity though with no sudden surprises.

Despite having more than 150 horsepower the 04-05 CBR1000RR is very civilised. The engine could be considered a little uneventful versus other litrebike motorcycles. 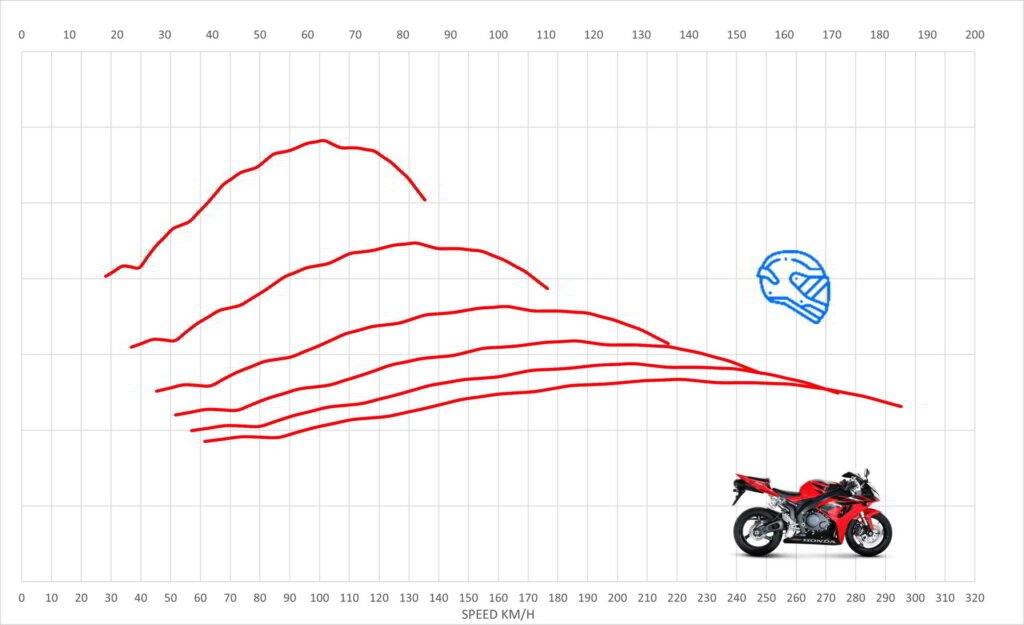 The 04-05 CBR1000RR gained an extra 20 horsepower over the outgoing CBR954RR but unlike Yamaha’s 04-06 model, this extra power did not come at the cost of bottom and midrange engine performance.

Compared to the CBR954RR, the 04-05 CBR1000RR is stronger and provides more acceleration in any gear and at any speed 98% of the time. This is despite carrying a little extra weight.

Combine this with a strong engine that delivers heaps of midrange and bottom end and you end up not having to worry about what gear you chose in almost any situation. There is just ample drive everywhere. 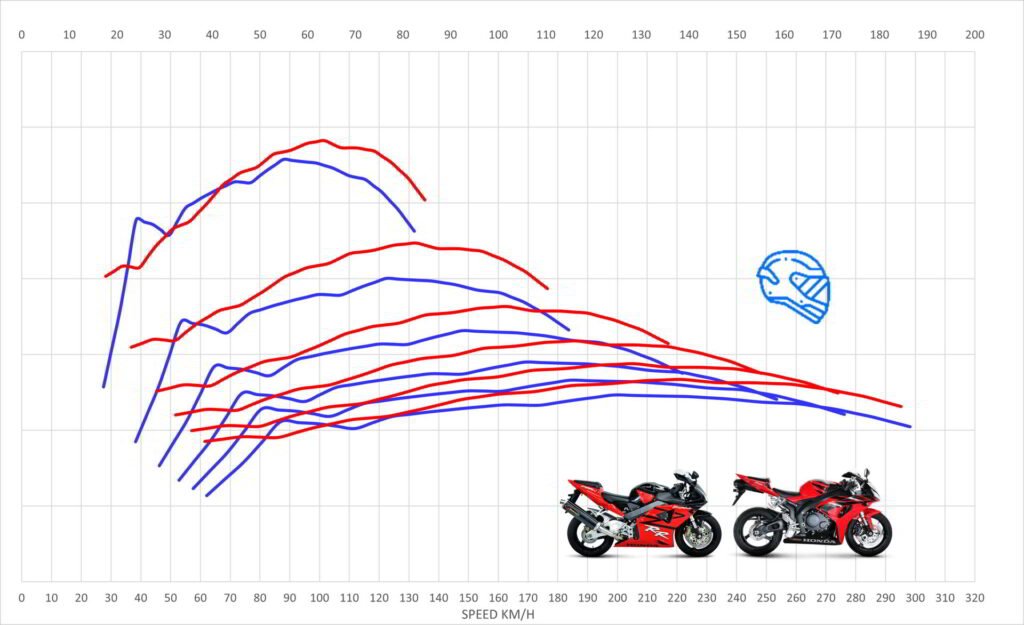 As you can see from the above in-gear acceleration curve.

The 04-05 CBR1000RR provides more acceleration in any gear and at any speed if comparing gear-for-gear, except where you can see that slight spike in torque/thrust in the very start of each gear of the CBR954RR.

On faster country roads you can use fifth or sixth and just roll on and the CBR1000RR just picks up and goes from low rpm.

Wind out the 04-06  CBR1000RR to 12,000 rpm and she moves like any Litrebike, though against rivals of the day the CBR1000RR lost out a little up the top of the rpm despite producing very similar power numbers.

This is because while peak power is very similar to rivals, the 04-06 just doesn’t make its peak power of 152 horsepower and hold onto it as long as rivals do,

Rivals all have a wider spread of peak power producing 150 horsepower plus over a wider rpm range. 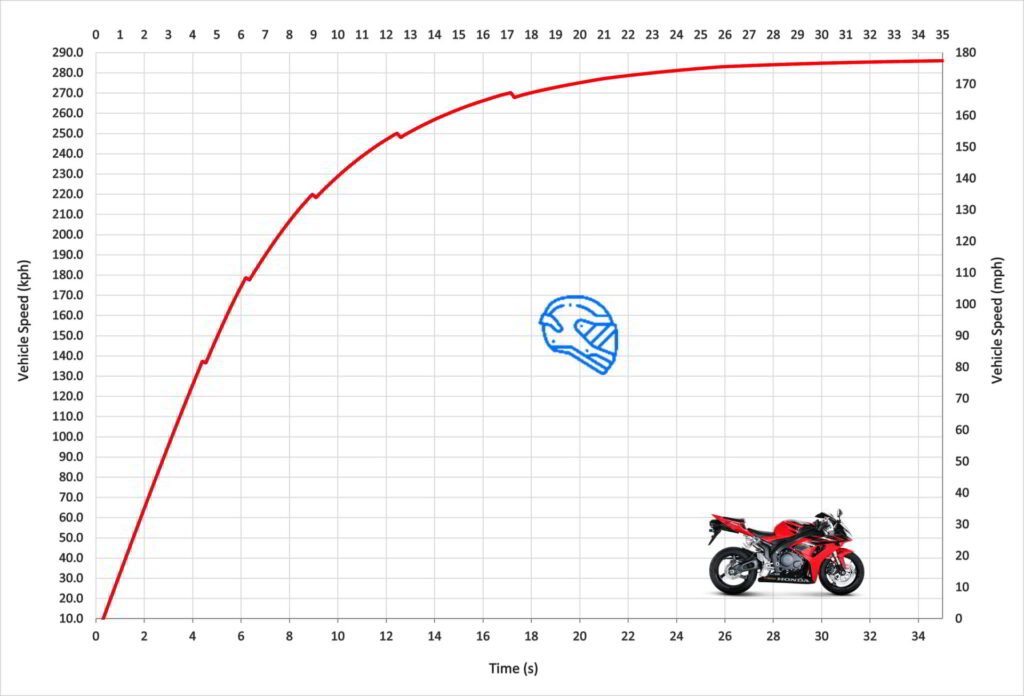 04-05 Honda CBR1000RR Acceleration through the gears

Despite the 04-05 Honda CBR1000RR being 20 horsepower up on the model, it replaced, its competitors at the time also released new and more powerful machines.

Unfortunately for Honda the new (at the time) 04-06 Yamaha YZF-R1 and ZX-10R were perhaps just a little faster as well as the existing K3-K4 GSX-R1000 having a slight edge too.

Despite the above reality, the 04-05 is a step up from the CBR954R and is an immensely fast and capable motorcycle. The differences between the 04-05 CBR1000RR and its competitors are not noticeable on the road.

Unlike its skittish predecessor and rivals that are unstable and like to wheelie, the 04-05 Honda CBR1000RR is remarkably stable and reluctant to wheelie when launching. 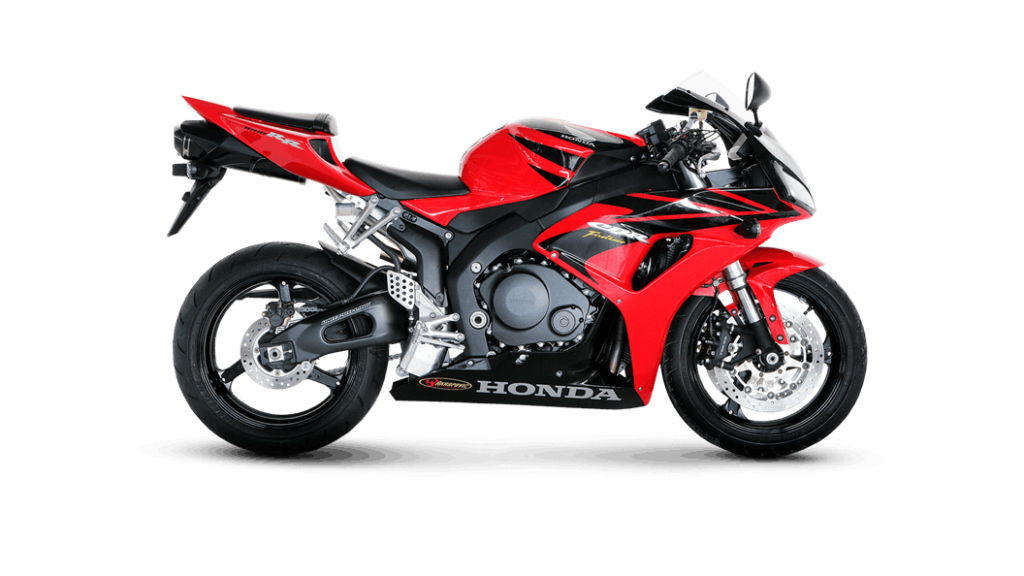 Superbikes of any ilk are notoriously hard to launch. Their front wheels in the first few gears are always looking to twelve o’clock. Their bars wiggle and shake as their front ends go light due to their insane acceleration.

The 04-05 Honda CBR1000RR bucks this trend and is quite sensible for such an immensely fast and capable machine.

The engine is shorter allowing for a much longer swingarm. The engine is also positioned further forward for a more front-weight bias.

The wheelbase is longer too than the CBR954RR, and the whole motorcycle carries around 10kg more.

The above no doubt helps with stability and reduces the tendency to wheelie.

Though a major factor is the headstock-mounted electronic steering damper (HESD) which keeps the bars pointing straight even under the most aggressive acceleration.

It also helps that one of Honda’s major focus and design goals for the 04-05 CBR1000RR was to create a motorcycle that was accessible to riders at all levels, and ensure its power and performance is easy to transfer to the road with minimal drama.

Launching is easy. You can focus more on getting that clutch engaged quickly and effectively without worrying about looping the bike, keeping it a straight line, or being thrown off by a tank slapper.

The clutch is hydraulic and does not provide the greatest feel and is miles off most Suzukis with a cable clutch set-up.

Once you get a feel for it the 04-05 Honda CBR1000RR puts down some impressive times.

You can get the clutch fully engaged from anywhere as low as 6000 rpm and the 04-05 will consistently put out very low three-second zero to sixty runs all day long.

It will wheelie in first gear but bizarrely you have to ask and get very aggressive with throttle input before the 04-05 CBR1000RR will misbehave.

The gearbox is not the best, and going from second first to second gear can often conjure a false neutral more often than you’d like. So you have to be firm at the lever.

You’ll be changing into second gear approaching 90 mph, from which point the 04-05 Honda CBR1000RR is rock solid all the way to flat out. 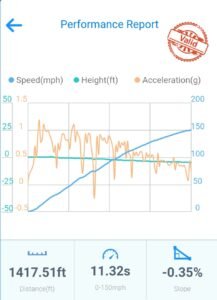 The 04-05 Honda CBR1000RR is pretty roomy and provides some good protection from the elements, even for taller riders. There is plenty of space to slide your bum back into the seat, tuck elbows in and get your head low.

After a few runs the 04-05 Honda CBR1000RR hit a top speed of 179 mph, which was bagged a little after the mile mark from a standing start.  Which is not bad though I think that there is a little more to come.

Your mileage may vary, though with a full system and tune definitely a 180 mph plus motorcycle in the right hands.