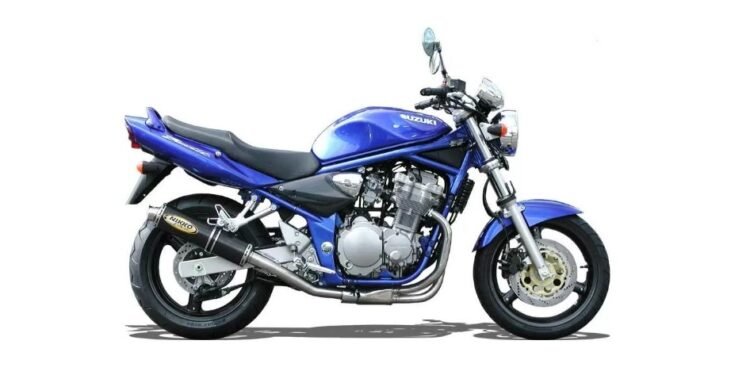 The Suzuki Bandit does the quarter mile in 12.46 seconds

Suzuki was ahead of the game with their Bandit 600.  Despite there being similar motorcycles before, we could argue that Suzuki started the modern naked big-bike entry-level class that we see today.

This is a class that has been fought fiercely over the years till today, with various machines such as the MT-07, CB650R and many more all competing for your attention.

In the psyche of motorcyclists today, the Suzuki Bandit 600 has almost been forgotten, though there are many out there on the road still, and provide great bang-for-buck performance and can be picked up very cheap via the secondhand market.

When the bandit was at its most popular in the late 90s and early thousands it was up against many new pretenders, such as the Fazer 600, Honda Hornet, Monster 600 as well as Suzuki’s own SV650.

Just like its competitors, the Suzuki Bandit 600 was powered by a donor engine from a sports motorcycle with the rest of what made it up from the parts bin.

The engine in question was taken directly from Suzuki’s GSX600F instead of the more powerful GSX-R600.

With a claimed 87 horsepower, the GSX600F engine was not nearly as powerful as the GSX-R600 engine of the time.

We could argue that Suzuki made a mistake, but this didn’t stop the Bandit 600 from being one of the biggest sellers.

Once the engine made its way to the Suzuki Bandit 600 it got that ‘retune’ that manufacturers always do,  and ended up producing less power and no noticeable extra power and torque low down. 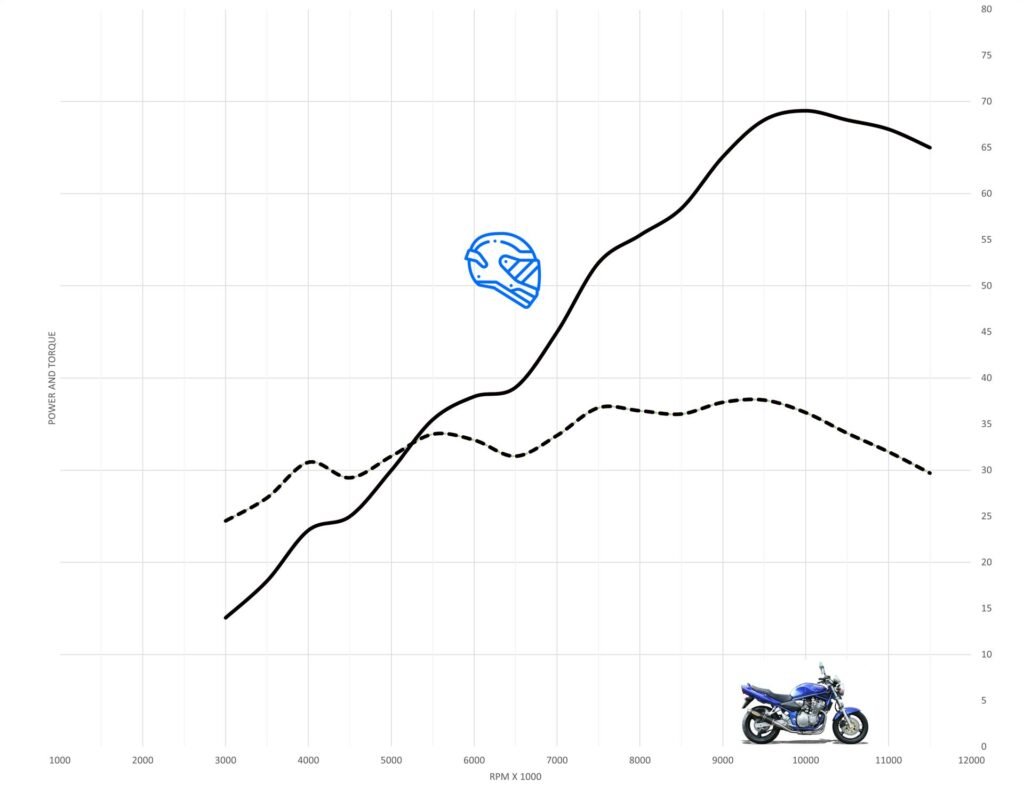 77 horsepower at the crank is the claimed figure from the 599 cc inline-four.

Once we take into consideration the transmission losses, at the rear wheel the Suzuki Bandit produces a modest 69 horsepower at 10,100 rpm.  Torque is equally modest at 37 ft/lb at 9500 rpm.

These are pretty disappointing numbers from a 599 cc inline-four though we must take into consideration that the engine even at the time was already long in the tooth as it had been about a good while in various forms.

To be fair though, Yamaha’s FZ6R is many years younger but its engine is even less powerful, but does do better in the lower rpm which works for the road.

The dyno curve does show lots of peaks a throughs, though when ridden these are not felt nearly as strongly as the graph might suggest but they are noticeable.

If you do find yourself at either 4500 rpm or 6500 rpm there is some hesitation before the engine picks up. These dips aside, the engine is smooth and the carburation is good.

Things clean up at a giddy 7500 rpm where the Bandit 600 produces close-to-peak torque with a flat spread of drive until the 9500 rpm torque peak.

This is where you have to live if you want something resembling instant acceleration, as anywhere below and the Suzuki b]Bandit 600 is just making noise and not really doing much else. 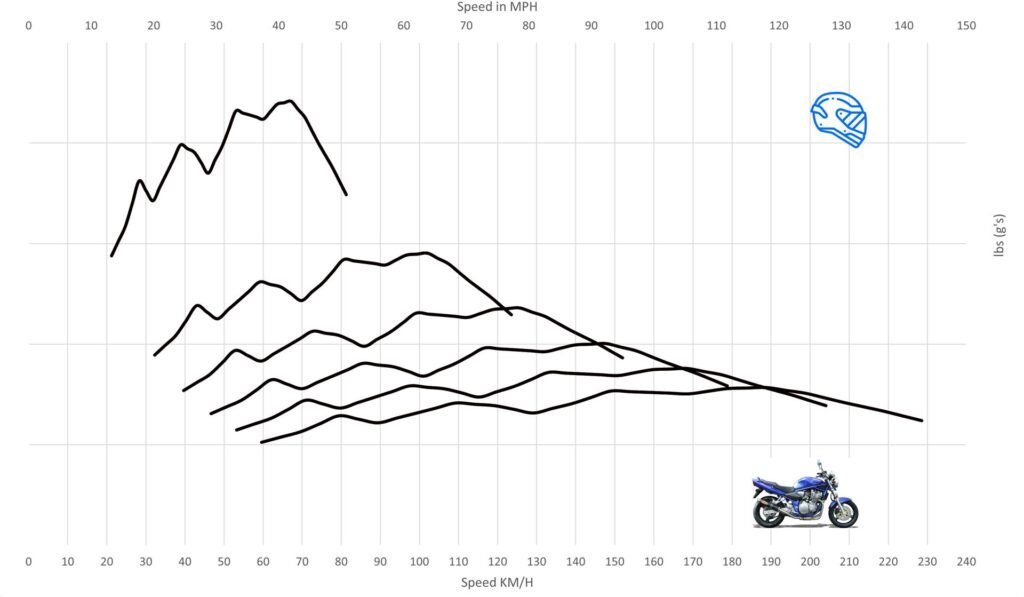 Against rivals of the time, the Suzuki Bandit 600 had the weakest engine on paper and on the road, perhaps with the exception of the Monster 600.

The weak engine is exacerbated by the Suzuki Bandits’ hefty curb weight of 220 kg courtesy of it being the heaviest motorcycle in its class by a wide margin.

It is not all bad as the Bandit 600 is geared relatively low compared to competitors.

This helps make up for the lack of power and torque as well as the extra weight, though ultimately it still lacks a little as low gearing can only do so much if the engine lacks power, and has to move a hefty weight.

On the plus side, the engine is great fun. You can thrash it through the gearbox and enjoy the high rpm supersport howl without speeds getting too silly.

When out and about the Suzuki Bandit 600 will easily handle the vast majority of situations at legal speeds.

Around town first gear is actually quite peppy as is very low.

First and second gears are quite wide apart, but from there on gears are evenly spaced. First gear is only really good for pulling away and very slow-speed stuff because any faster than 30 mph rpm is at 7000 rpm.  So you’ll be looking for another gear.

To make good progress and have some acceleration available in town you’ll need to be in second or third. Sometimes third gear can feel a little flat the lower the rpm, so with that in mind second gear is prefered but rpm does feel too high sometimes.

I ideally you would want to be in fourth gear in town but you’ll have very little acceleration to get you out of trouble.

You can be a gear higher on a Fazer 600 or even a Honda Hornet 600 in town and have rpm lower and have better acceleration available.

With most road duties, and if you are not in a rush you’re not often asking for more power, perhaps with the exception of safe overtakes on the highway.

From 5000 rpm pickup is ok but as you drive through 6000 rpm and beyond that little flat spot in torque makes itself known and can hamper acceleration right when you need it most.

In highway situations when you want to overtake quickly you must kick it down to at least fifth gear but better upping your rpm up to around 7000 rpm which would be fourth gear at just under 70 mph.

Only then will the bandit 600 move with some enthusiasm as from 7000 rpm the Bandit 600 picks up much for willingly.

If you’re out having fun with the Bandit 600, there is no being lazy with your gears. You really have to keep the engine on the boil.

Again, 7000 rpm and above is a must. If you keep the engine above 7000 rpm, the Suzuki 600 Bandit moves pretty well and is immense fun to thrash.

As gearing is relatively short you will be working hard on that gearbox but it is very rewarding.

The first three gears can be thrashed to the redline and you still won’t have exceeded 100 mph while a Hornet 600 will be doing 110 mph plus. 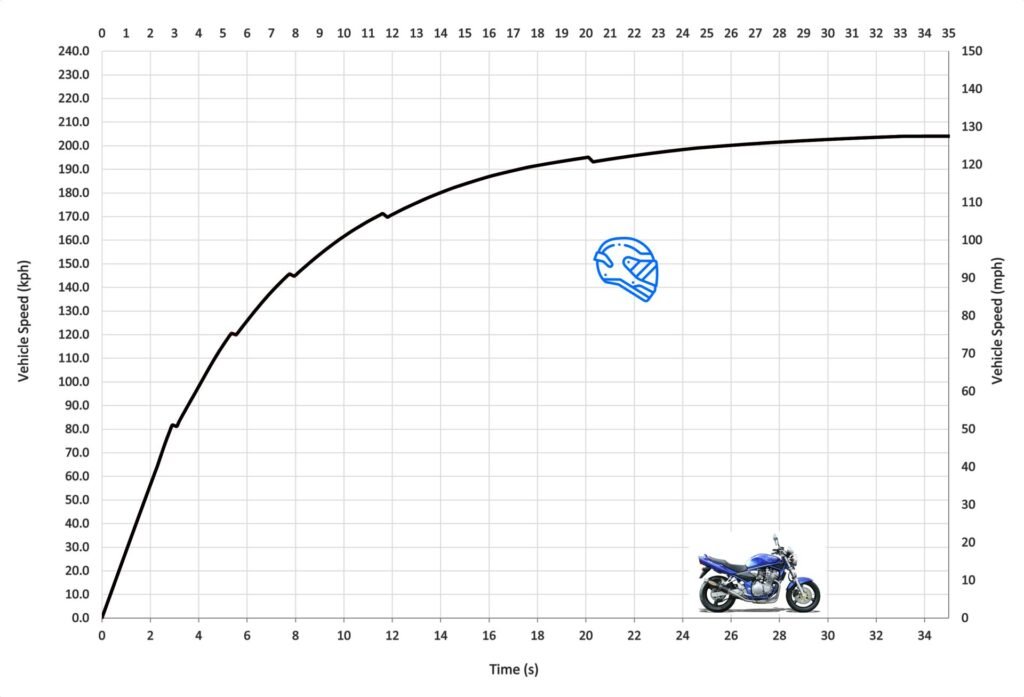 The Suzuki Bandit 600 is among the least powerful in its class back in the late 90s and early thousands. It’s also the heaviest too.

That 69 horsepower has a lot of work to do to get the Bandit 600 moving and more so to keep up with rivals.

Thankfully the Bandit 600 is extremely easy to launch.  With only 69 horsepower and a hefty 220 kg wet, wheelies, bar shakes or wheelspin are the last things on your mind. This is because they don’t really happen.

You can be more aggressive with the clutch than many other motorcycles due to the lower power and higher weight, though of course just like any motorcycle, dump the clutch too hard and the Bandit 600 will oblige with a wheelie.

A lot of high rpm 600s produce their useful power and torque at very high rpm. The Bandit 600 is no different.

This often means that they run the risk of bogging down in first gear if you have the clutch fully engaged while a few 1000 rpm below where peak torque is produced. 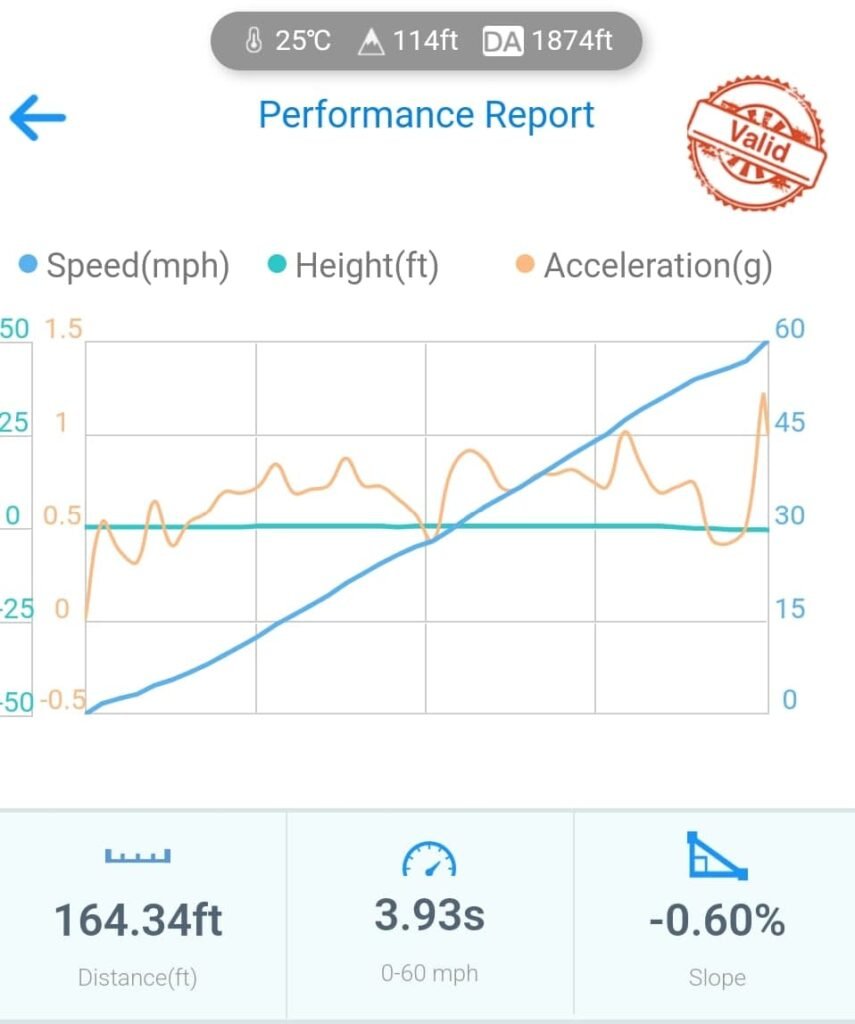 You will still see your best 0-60 mph times if you slip and have the clutch fully engaged between 7000-9500 rpm, but you can still get decent ETs if you dump the clutch at lower rpm and drive the Bandit from 6000 rpm.

The Suzuki Bandit 600 might be easy to launch, but it’s hard to dip below four seconds.  It also unfortunately needs a gear change to hit 60 mph, so if you want to score below four seconds you must shift without using the clutch as an imperative.

The Bandit 600 gearbox is great like many Suzuki’s of this era. Travel is short and clutchless changes are super fast and consistent.  Also never a false neutral.

Most competent riders though will launch to 60 mph in the low fours. A pro drag racer might be able to get as low as 3,70 but that would be the pinnacle.

With 60 mph out of the way, it is just the simple task of shifting gears.

With only 69 horsepower things are very settled once into second gear. From then on you should be shifting anywhere between 11000 and 11500 rpm for best results.

Once into fourth gear, the Suzuki bandit would have accelerated from 0-100 mph in 9.90 seconds.

This might be one of the slower times in the class but still as fast as a BMW M2, which is a decently fast sports car.

By any standard, this is a very respectable time.

From there on, the Bandit 600 does not have much more acceleration to offer. And on our Naked version, you’ll really need to get in a good tuck as you’ll struggle to hit a real 120 mph.

If you get really low and tuck your elbows in the Suzuki 600 Bandit is good for 127 mph, but it is hard work.  Your speedo will be showing 140 mph plus but it would be lying to you as many do.

It’s likely possible to hit top speed in fifth gear if you take the rpm right to the redline though it will take longer as thrust tails off and produces less than if you were to hook sixth.

The fared bandit would not be much faster maybe a 3-5 mph.

The top speed of the Bandit 600 is a fair bit off of rivals but comes close to the naked Suzuki SV650 as both have similar power.