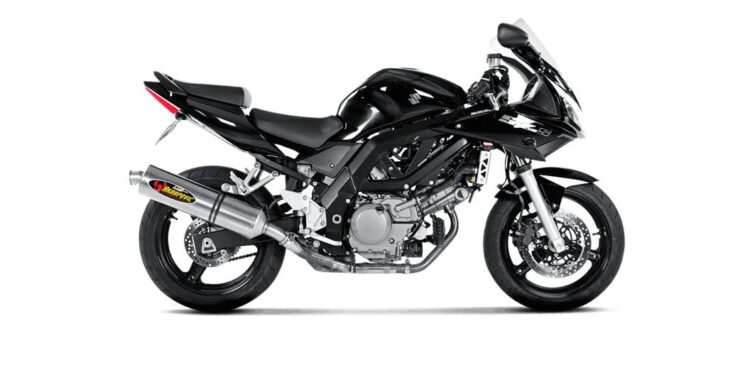 The Suzuki SV650 came on the scene back in 1999 and was in many ways a smaller version of the wicked Suzuki TL1000S from which it took its engine configuration and much of its styling cues – albeit a little softer and friendlier looking.

I do not think that Suzuki realized at the time just how massively successful the SV650 would turn out to be or maybe they did, who knows…

Suzuki seemed to hit the perfect compromise between looks, sound, performance, and user-friendliness. And of course, very importantly its price.

It’s a winning formula replicated time and time again today with many motorcycles such as Yamaha’s MT-07 which you could argue is the spiritual successor to the SV650, even though it is a motorcycle from a rival brand and also that the SV650 is still in production today.

What made the SV650 so successful you may ask? It is simple really. The SV650 looked good, went well, sounded good, and was cheap and reliable.

Powered by a 649 cc 90-degree L-Twin engine with a claimed power figure of 72 hp and which was cradled in a pretty unique aluminium trellis frame similar to its big sister the TL1000S.

The SV650 only weighed 169 kg dry so it made great use of that 72 horsepower. The engine made an impressive and class-leading (at the time) claimed torque number of 47.2 ft/lb and with a good spread across the rev range.

This made the engine responsive in any gear and in any situation.

And like its TL1000S sister, there was a nice little kick in power/torque as the tacho needle surged past 6000 rpm. It made for an overly exciting and fun engine.

It did not have the peak HP of some of its 4-cylinder competitors such as the Fazer 600 or Honda Hornet 600 but the delivery was meatier and more responsive in real-world conditions.

The SV650 was not perfect and was probably mostly let down by its very user-friendly and soft suspension but this could be remedied easily with a front fork re-valve/spring and stiffer rear shock.

The SV650 had its own race series too called the Mini-Twins, a championship that is still active today.

The first SV650 was arguably the best in most people’s hearts and also the most popular and ran from 99-02 in a faired and naked version.

From 03 to 17 we had a revised SV650 that was almost all new, with a new frame, pointier styling, and the addition of fuel injection. While technically a more accomplished bike and still extremely popular it never quite had the same appeal as the original.

From 2009 to 2016 the SV650 we also had the Gladius. With the Gladius it looked like Suzuki was trying to recapture much of the spark that the original had though it never really took-off like the original despite it being a good motorcycle.

For the Gladius it also didn’t help that many learner laws had changed in many markets since the original SV650 came onto the scene in 99, and there were heaps of very capable competitors all with various incarnations of what made the SV650 so popular in the first place.

So, the SV/Gladius despite being as good as ever did not really stand out as many equally good competitors.

2017 onward and we got a new SV650, which in terms of styling really took much of what made the original so successful and re-imagined it for the 21st century while also offering an ‘X’ version that had a Cafe Racer look straight from the factory.

It’s a very nice bike but again it occupies a crowded market with many great alternatives. 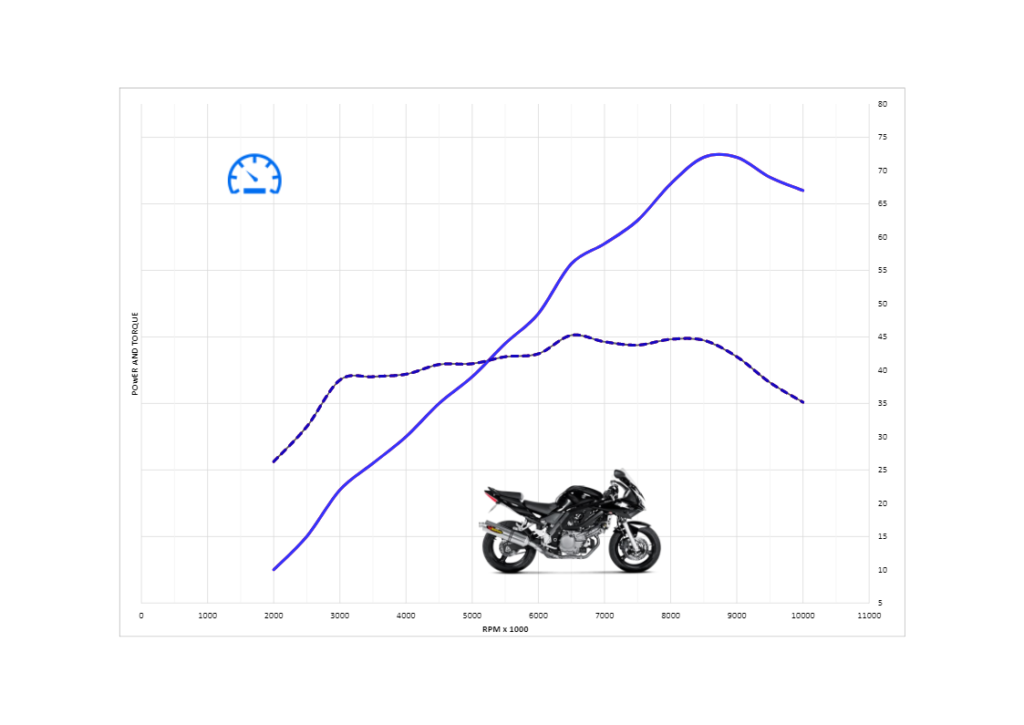 72 horsepower might not sound like a lot of power though the little SV makes great use of it due to its relatively lightweight and good choice of gearing.

Torque is a very respectable 45 ft/lb that peaks at 6000 rpm and hold on until around 8,500 rpm where it tails off, which is typical of most L-twins.  SVs tend to range from 65 to 70 hp plus at the wheels and this SV is a good one.

Like most L-Twins of a significant capacity, the SV650 is a little chuggy below 3000 rpm but from then onward it produces a nice linear flat torque curve that builds progressively until you reach 6000 rpm where you get a nice little surge in acceleration when it comes on cam.

In first gear, this is where the wheel will lift nicely on the power as you drive it but the wheel can lift before that rpm point with an aggressive snap of the throttle, especially if you are on the naked version which runs slightly lower gearing than the faired version.

The engine performance is most closely matched with the Yamaha MT-07 which we have tested previously (HERE) though arguably the MT-07 needs less rpm while the SV650 comparatively needs to push higher rpm and rewards the rider immensely when working the gearbox and taking the engine right out to 10,000 rpm and beyond.

Also, the sound is great, especially when the stock muffler is replaced with a slip-on or full exhaust system. In most real-world situations, the engine delivers smooth accessible power and acceleration that has a bit of spice. 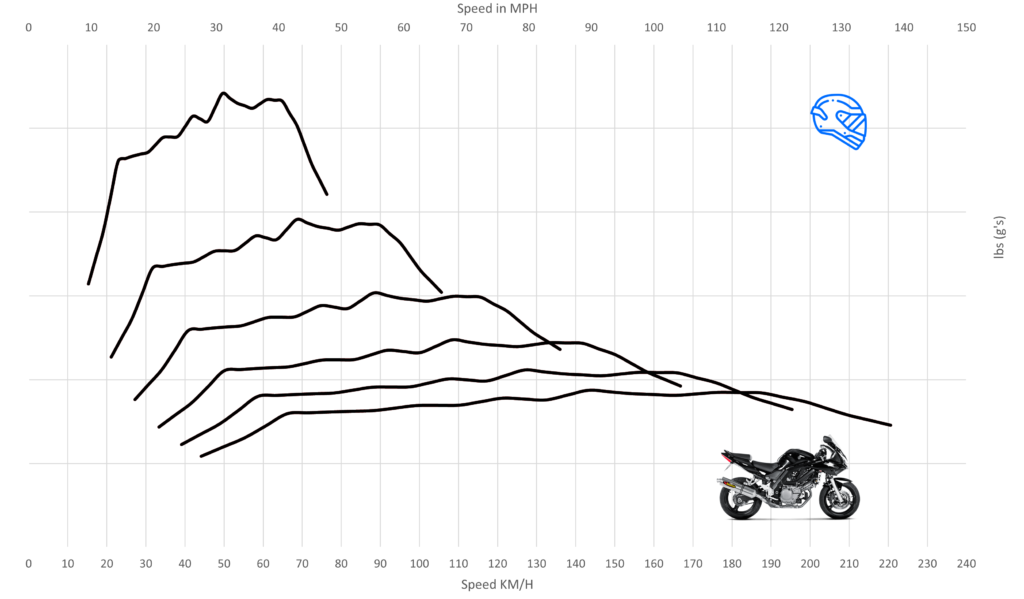 The SV650 is certainly a little sleeper. Having spent a fair bit of time on SV650s over the years as well as one of my good friends owning one, I am very much acquainted with how rapid these little bikes can be in the right hands given their relatively low power.

They say that you can only really use around 70 hp fully when accelerating off the line on a stock height and wheelbase motorcycle, hence why on your litrebikes you don’t simply dump the clutch and twist the throttle 100% giving the whole 180 hp plus.

It is just not possible, so the clutch is used to modulate and transfer as much power as possible to the tyre without looping or spinning the rear.

What makes the SV650 so effective is that it pretty much makes the perfect amount of power (70 hp) to launch the bike from a dig.

Sure, you still do not rev it to 10,000 rpm and dump the clutch but due to having a good clutch, lightweight, and the right amount of power it is one of the easiest bikes to translate close to all that 70 hp as quickly as possible into rapid forward motion.

I witnessed my friend on his SV650 smoke anything and everything during that 0-60 mph sprint. It did not matter what bike he came up against he almost always won.

Yes, many larger motorcycles are more capable, but they require a heap more skill to get them off the line effectively due to their insane power. While on the 70 hp SV650, if you are skilled, you can be consistent much more of the time.

Now your results may vary but our little SV650 managed the sprint to 60 mph in 3.39 seconds and requires a gear change into second which does cost it a few tenths for sure. 0-100 mph is a very impressive 8.14 seconds and the same as the MT-07.

This is a hugely impressive time. The quarter mile is achieved in only 11.82 seconds with a terminal speed of 115 mph.

Again, this is very impressive and close to the optimum for this motorcycle. Your average weight’ decent rider would mostly be in the low 12’s at around 110 mph.

Providing that you hold on for long enough the Suzuki SV650 will hit a real top speed 134.2 mph but only if you are in a good tuck and small enough to not hurt the aerodynamics.

Top speed comes up in around 35 seconds but realistically a flat 130 mph is what you would be doing most of the time.

There is plenty enough power to keep up with bigger faster bikes at sensible speeds as under 100 mph the SV650 can keep them in sight.

The SV650 has a flexible engine so there is no need to drop to 4th or 5th to overtake slow-moving highway traffic, just leave it in top gear and open the gas and it will surge past effortlessly.

If you need a little more, SV650 responds very well to tuning as due to the popularity and the many race series there are many tuning options/parts and a wealth of forums and people with knowledge on getting the most out of these motorcycles.

Without too much cost you can get these up to 80 hp plus without too much effort. There are also big-bore kits available too that really boost up the power and torque.

If you are considering the SV650 as your first motorcycle, and want something cheap and easy to maintain fast fun, and reliable that also sounds great you cannot really go wrong with an SV650.

And you can save heaps of money with an older second-hand SV versus buying a newer alternative such as an MT-07. 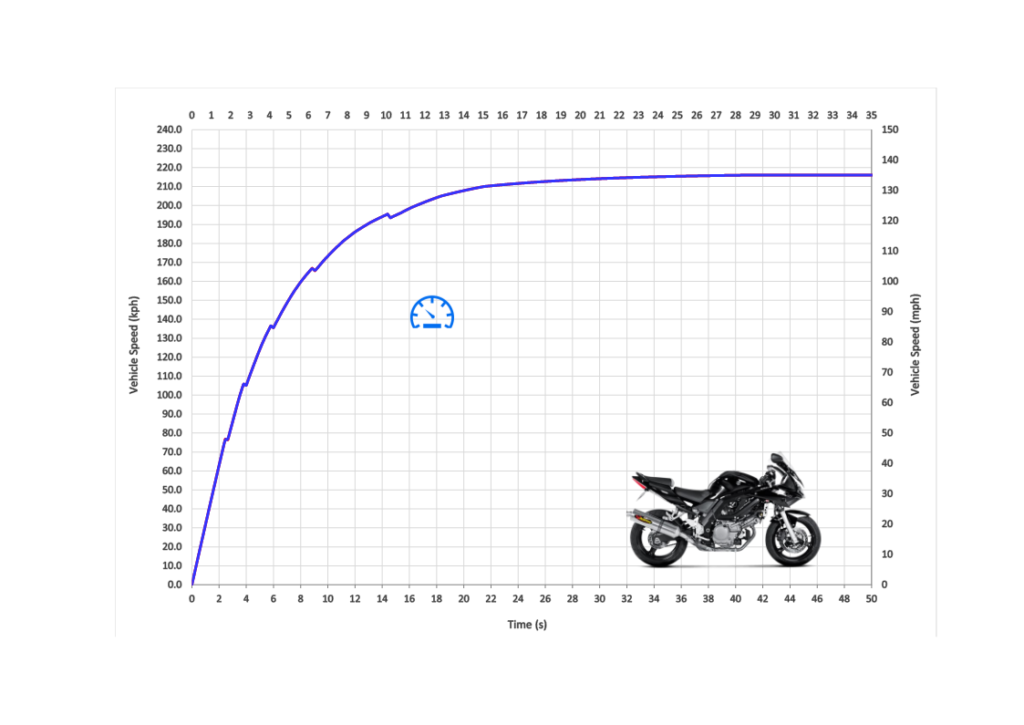