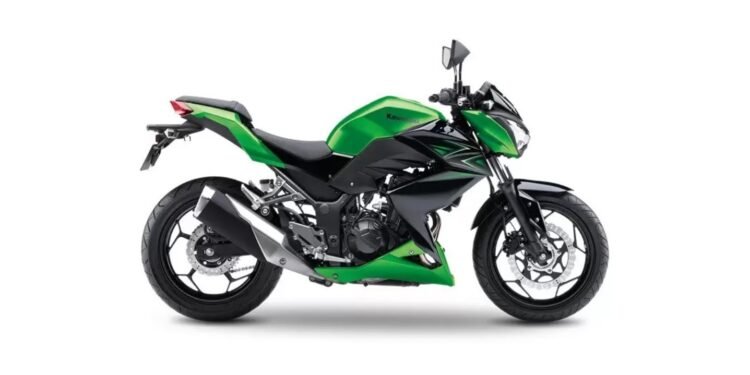 Below, we take a look at Kawasaki’s Z300 in-gear and outright acceleration through the gears, along with its top speed. 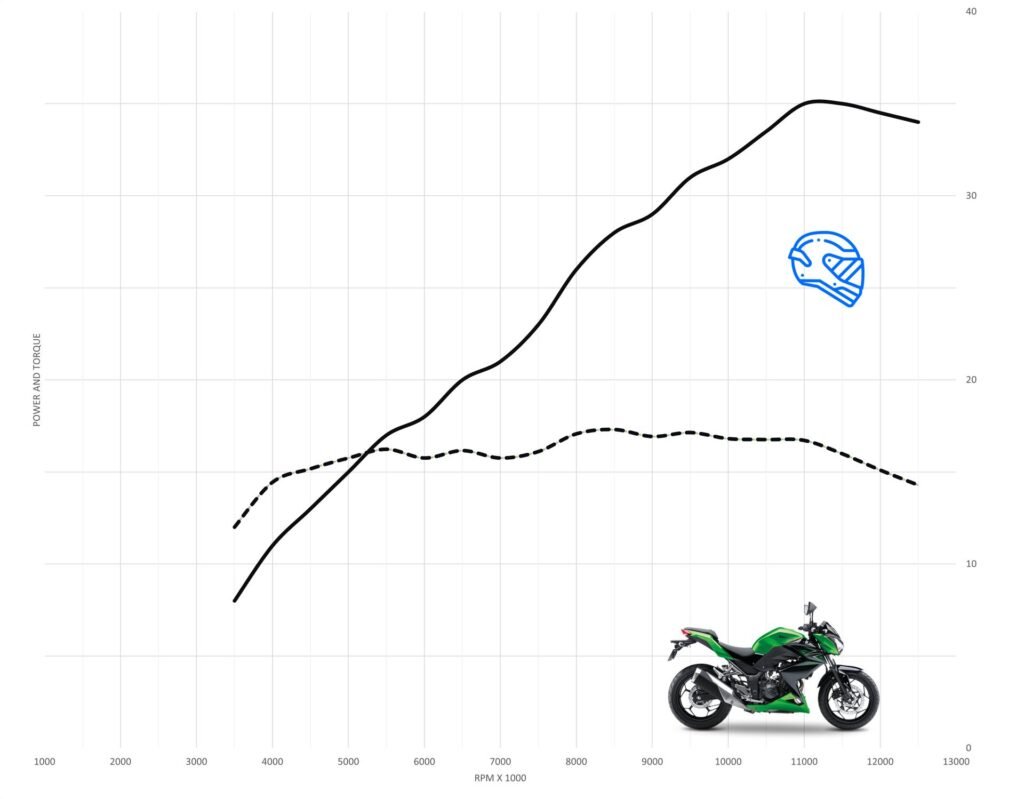 The Kawasaki Z300 is powered using the same 296 cc parallel two-cylinder engine as its faired sister the Ninja 300.

The power delivery is smooth considering that it only has two cylinders but there are a few peaks and troughs throughout the rpm range, but they are not really felt on the road other than perhaps the little kick at 8000 rpm.

The engine makes more than 15 ft/lb of torque from as low as 4200 rpm, which is only a fraction off the peak torque though, despite this, you need to keep the engine spinning hard to make fast progress and to keep up with your mates. 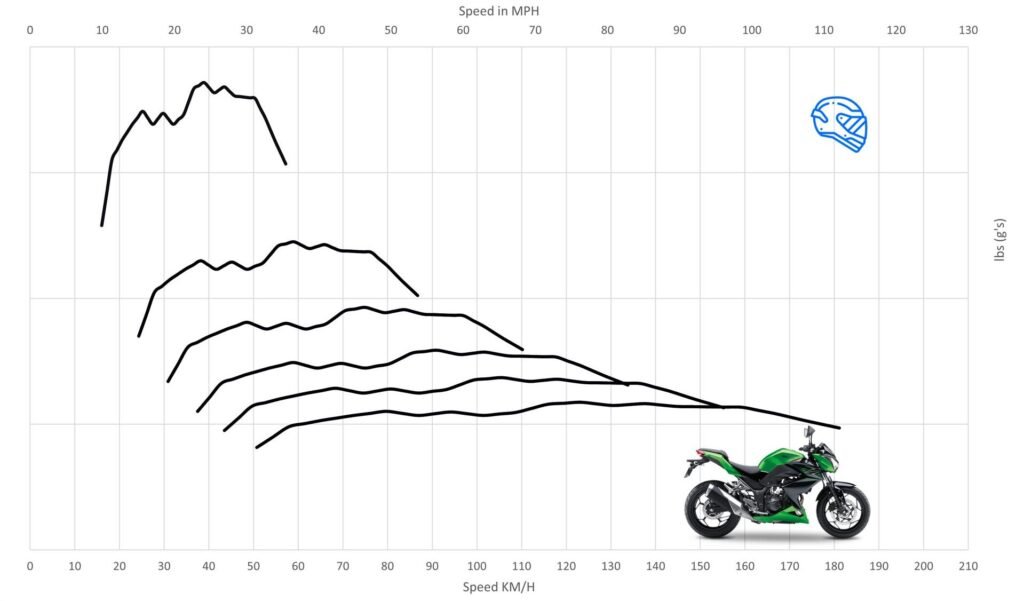 The engine feels best and most responsive above 8000 rpm where which means that you have to work the gearbox for the best effect.

Thankfully the engine is geared well and not too low to make the engine too buzzy and not too high to kill it, though you will always need to use high rpm which is something you can’t really get away from with a high revving small capacity engine. So this is not a fault with the Z300.

Against rivals such as the CB300 and the MT-03, the Z300 engine performance sits somewhere in between and is more capable than the Honda, and if kept above that 8000 rpm sweet spot can keep the MT-03 honest.

Though ultimately the Yamaha has the slight edge if push comes to shove.

If you want to overtake at highway speeds, there is not enough acceleration in top gear with fourth gear offering the fastest and safest pathway past dawdling traffic. 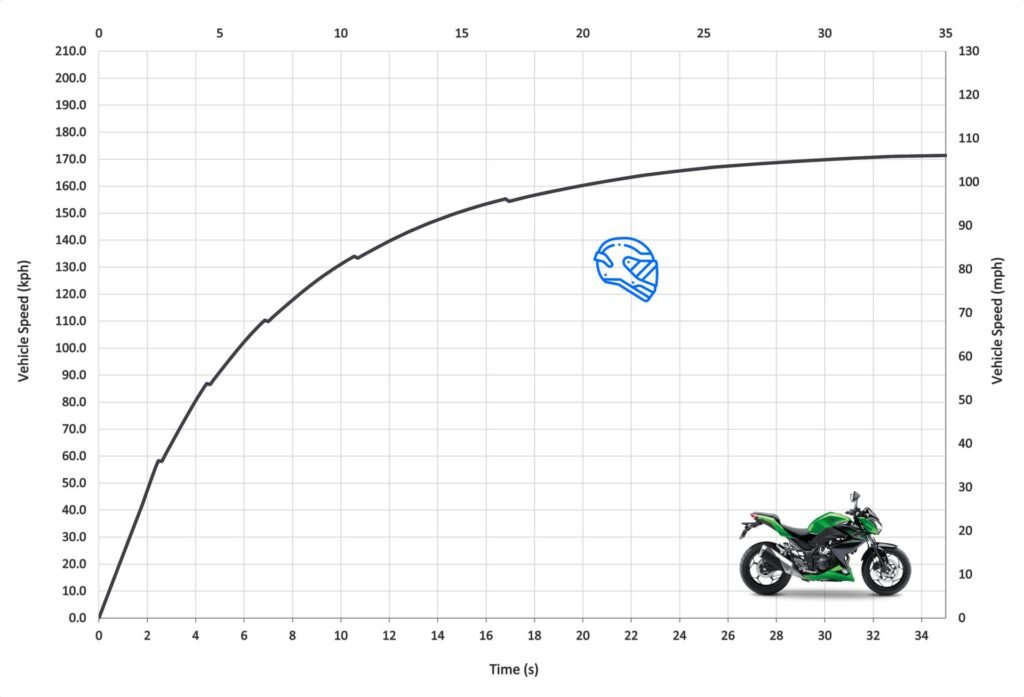 Kawasaki Z300 Acceleration through the gears

Powered by the same engine as the Ninja 300 we would expect performance to be very similar and it is.

Like all small capacity engines they often need one or two gear changes to reach 60mph/100 km/h so could be quicker if it were not for the time lost changing gears. Clutchless gear changes help but ultimately a quick shifter would benefit.

For best effect from a dig, you need to slip the clutch at around 8000 rpm without letting the rpm drop lower as you’ll bog a little and hurt your times.

You should wind her up to around 12500 rpm in the first three gears and then change at around 12000 rpm for selection into fourth and fifth gear.

The quarter-mile time for the Kawasaki Z300 is decent too at 14.34 seconds and a terminal speed of 91 mph making it a fraction slower than the Ninja 300.

Roughly about 6 seconds after passing through the quarter mile the Z300 hits 100 mph which it does in 20.41 seconds.

Anyway, acceleration differences between the two are simply down to aerodynamics as is the top speed with the Z300 hitting 107.5 mph which is a few down on the Ninja 300 which makes sense.

While the Z300 is naked the aero only starts to eat into its power above 80 mph but as the Z300 is not a 200 mph motorcycle so its lack of fairing does not hurt as much as speeds are much lower.