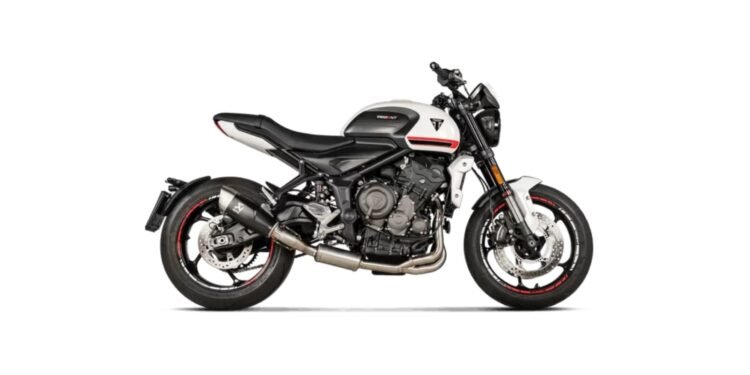 Triumph Trident 660 does the quarter mile in 12.00 seconds

A look at the Triumph Tridents 660’s engine performance, top speed and acceleration. 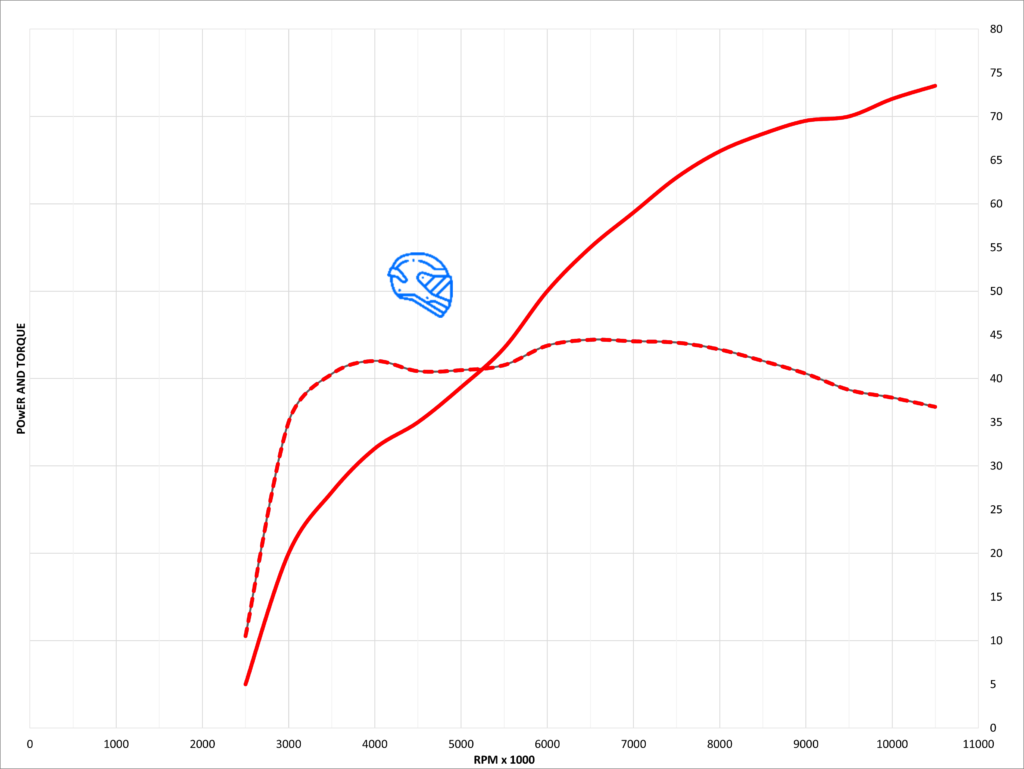 The new Triumph Trident 660 is powered by an all-new 660 cc Inline tripe engine that is based upon the 675 cc engine from the Street Triple 675.

It’s not all bad as often naked versions of superbikes or supersport bikes come equipped with ‘detuned’ versions of their sportsbike donor engines, though this is not always ideal for the road bias application of the naked motorcycle using those engines.

Sportbike engines are tuned for max power at very high rpm. Detuning them for more mid and bottom range or installing heavier components or less aggressive cams can only do so much to take the power from the top and redistribute it to where a road rider would want it most.

Depending on motorcycle brand or model we’ve seen mixed success at this.

The better option is to design an engine specifically for the road rather than a reworked race engine. This is what Triumph has done for the Trident 660, designing an engine perfectly suited to the road.

If we look at the dyno curve the Trident 660 peaks at 75 horsepower at the rear wheels literally right at the rpm limiter and produces 44 ft/lb pretty much between 6000 and 8000 rpm.

There is a nice bulge of torque between 3500 and 4500 rpm which is really where you want it for accelerating from lower speeds without needing higher rpm or lower gears.

The Triumph 660 engine produces more than 40 ft/lb of torque from 3500 rpm and all the way to 9000 rpm which makes for very accessible acceleration which is great for the road. 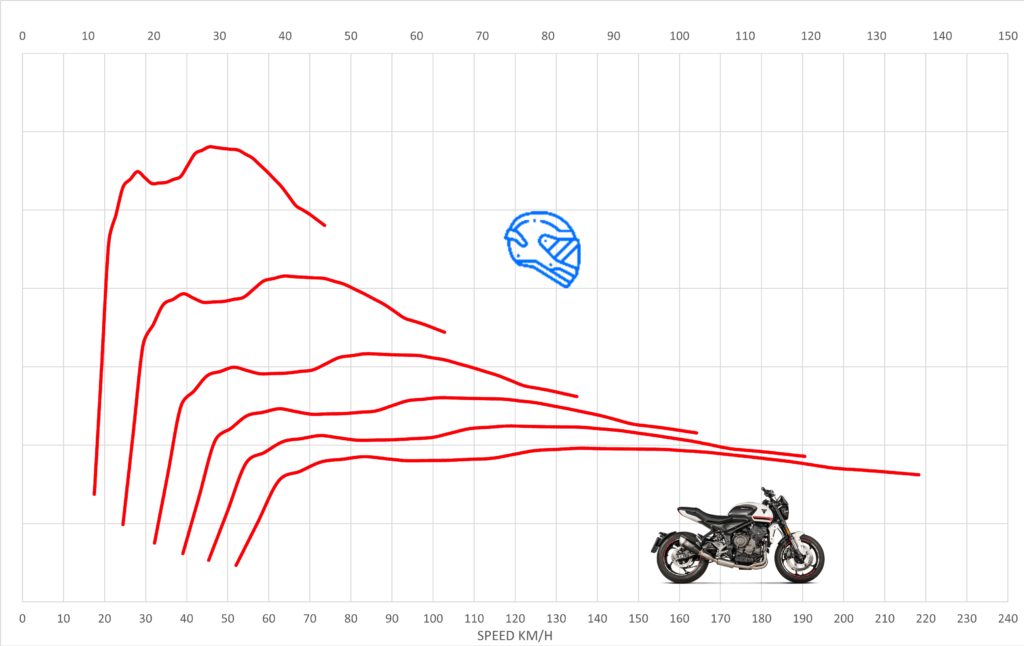 The Trident 660’s power and torque curve are perfectly suited for the road and is complemented greatly by Triumph’s choice of gearing, which is very low and road bias, in particulate the first 3 to 4 gears while the remaining two are conventionally geared for highway where rpm is not too high when cruising at those highway speeds.

This choice of gearing does make best of use of that 75 horsepower and its meaty spread of torque, with the Trident feeling relatively explosive in the first 4 gears regardless of the speed and rpm you find yourself at.

You do have to be quick with your left foot as you’ll be hitting the limiter effortlessly when charging through the gears.

The engine/gearing package is most effective in town and on the slower twisty stuff sub 80 mph where the Trident punches with the authority unlike any other motorcycle in this class except for the MT-07, a motorcycle which has been the grunt monster of the class since 2014.

I’d bet that the Trident 660 would trade blows with the MT-07 for roll-on performance in most gears, though the MT-07 does feel a little livelier which is more likely to do with the Trident 660 having softer part-throttle openings that make it more user-friendly.

Just like the MT-07 highway overtakes are effortless and do not require dropping down a gear to get the job done effectively.

At highway speeds, rpm sits nicely at a little over 5000 rpm.

If you’re in rush to get the job done, as you accelerate to around 75-80 mph and approaching 6000 rpm the Trident produces peak torque just as you’re at the north end of your overtake, so the acceleration picks up and feels eager the more you twist.

You can of course drop it down to fifth if you are extra impatient at which points the rpm will jump right to where peak torque is, so you’re covered.

You of course could go faster in fourth and even third but would lose time clicking down the gears, so fifth or sixth is the go.

On the road, the Trident is more willing in any gear at any speed than say a CB650R and some others in the class.

The four-cylinder CB only has the edge above 8-9000 rpm but that’s not necessarily a good thing if road riding is more your thing than chasing top-end acceleration. 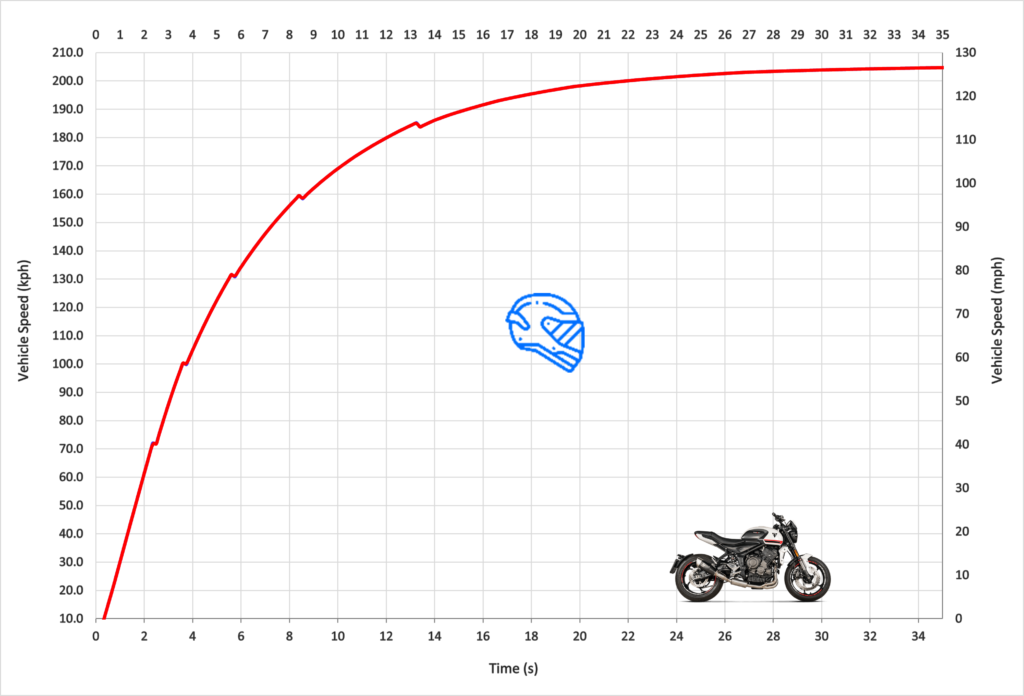 Motorcycles in this class are not meant to set records when it comes to top speed and acceleration, though that does not mean that they are not fast and capable of laying down some respectable times while putting a grin firmly on your face.

The Triumph Trident 660 is not as fast as a Street Triple 675 nor is it the fastest accelerating in its class, but it still performs well in a straight line and will humble some sportscars 10 times its price off the line.

To get the best out of the Trident 660 as a pilot you must change up gears right at the rpm limiter. This is because the Trident continues to make power right until the limiter kicks in.  This has been typical of many Triumphs over the years.

Timing this right or getting it wrong by changing up too early will make the difference between laying downs those optimum times or not.

The Trident’s very low gearing does make it very accelerative off the line though its gearing being as short as it can hurt some of the specific times such as the sprint to 60 mph and the sprint to 100 mph, which are some of the more popular benchmarks.

This is because the Trident requires a gear change to hit 60 mph and just hits 100 mph right at the rpm limiter in fourth gear.

Many competitor motorcycles can hit 60 mph in first gear and 100 mph in third gear and don’t make their peak power right at the rpm limiter so have a little more flexibility when changing up a gear without the risk of impacting times too much.

You also have to control wheelies as the Trident due to its strong torque and very low gearing will happily point for the sky as no entry-level naked bike has the right to.

You must literally kiss the rpm limiter in second gear to hit 100 km/h. If you change up too early, you’ll add a few unwanted tenths to your 0-100 km/h time.

If you don’t change up at the exact right time by stretching the rpm all the way to the limiter, you’ll be more likely to be in the low four-second range for the 0-60mph and 0-100 km/h sprint. It’s not easy to break into the sub-four seconds on the Trident 660.

The above will also hurt the quarter mile time too if all changes up to fifth gear are not precisely made ‘just’ before the rpm limiter kicks in.

With that in mind string, a good launch together and the Triumph Trident 660 will hit a twelve-second flat quarter mile with a terminal speed of 111 mph.

With the option of an accessory quickshifter all else being equal a sub-twelve-second time is possible.

Being a naked motorcycle and while small is a little wider than some other naked motorcycles due to the tank size width. Of course, there is no screen or protective fairing to cocoon the rider from the elements.

Due to being a compact motorcycle this also makes it a little harder to make yourself small if you are above average height when in pursuit of a top speed attempt.

Either way, if you hold on tight enough in a decent tuck with decent conditions the Triumph Trident 660 will top out at a very respectable 127 mph.

Probably a little over 130 mph is possible if you’re a little smaller and if the conditions are perfect.