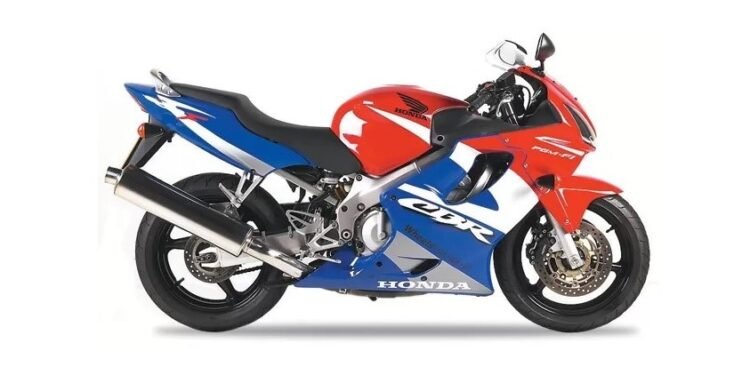 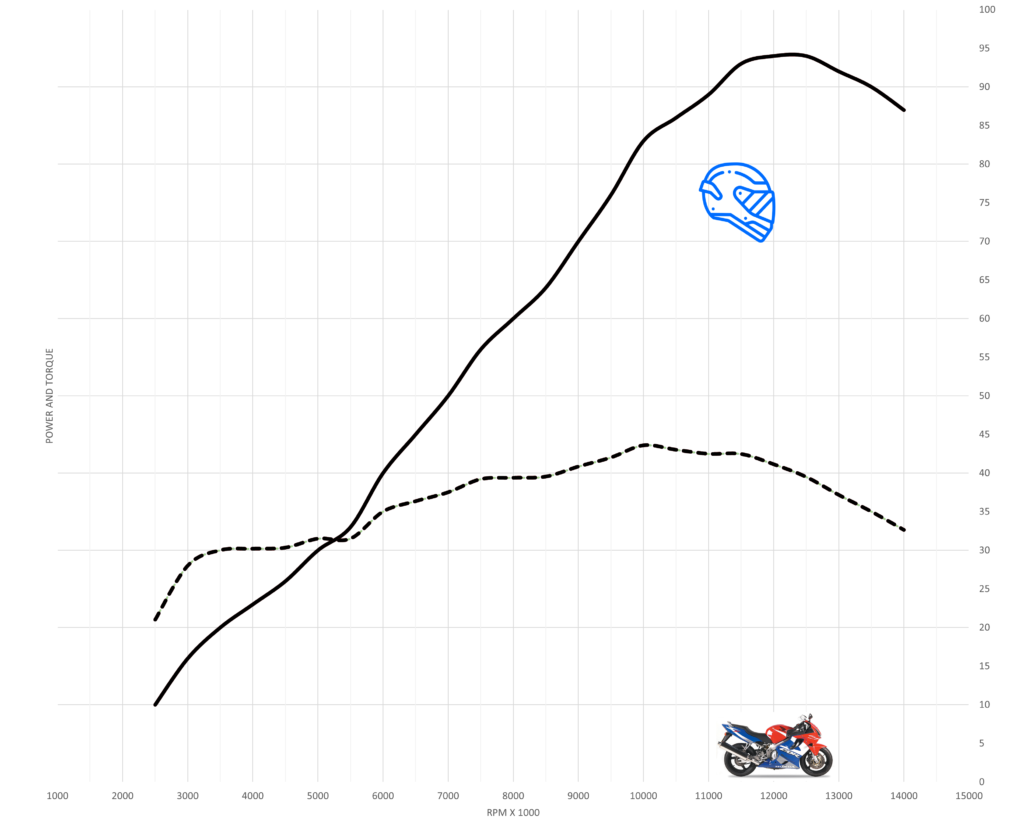 The Honda CBR600F4i was the first in this long-running series to come equipped with fuel injection.

It replaced the very similar CBR600F4 back in 2001 and arrived with numerous engine, chassis, and bodywork changes, though at first glance from some angles looked almost identical.

The engine was the same 599 cc inline-four lump but of course, with the carbs junked in favour of Honda PGM-FI delivered via 38 mm throttle bodies.

There is an extra 5 horsepower over the carby model it replaces as well as a 700 rpm higher rev limiter.

At the rear wheel, we see 94 horsepower and 44 ft/lb making this twenty-year-old machine more powerful than its spiritual successor the CBR650R.

For a 600 cc inline-four Supersport engine, it was never the best or outright fastest but was strong in all areas against rivals and was arguably the best all-around engine in the class right from its inception until its eventual replacement.

For the F4i, power is delivered smoothly in typical Honda fashion, but fueling could be a little better, especially around 2500 to 3000 rpm. FI for motorcycles back then was not as refined and we were spoiled by the smoothness of carbs for so long so earl FI motorcycle felt less than accurate.

Peak power of 94 horsepower is great even in 2022. Even better and by 600 cc Supersport standards, there is a good spread of torque right from 3000 rpm though it is not earth-shattering and could not be called a ‘grunty’ engine but it certainly picks up better than some rivals.

Things start to perk up and get interesting as you drive through 5000 rpm with a nice surge that turns into a howl as revs pile on fast. Once you are hitting 7000 rpm, then shortly after 9000 rpm, the CBR600F4i is pulling very hard as it screams with intent to an awesome 14,000 rpm! 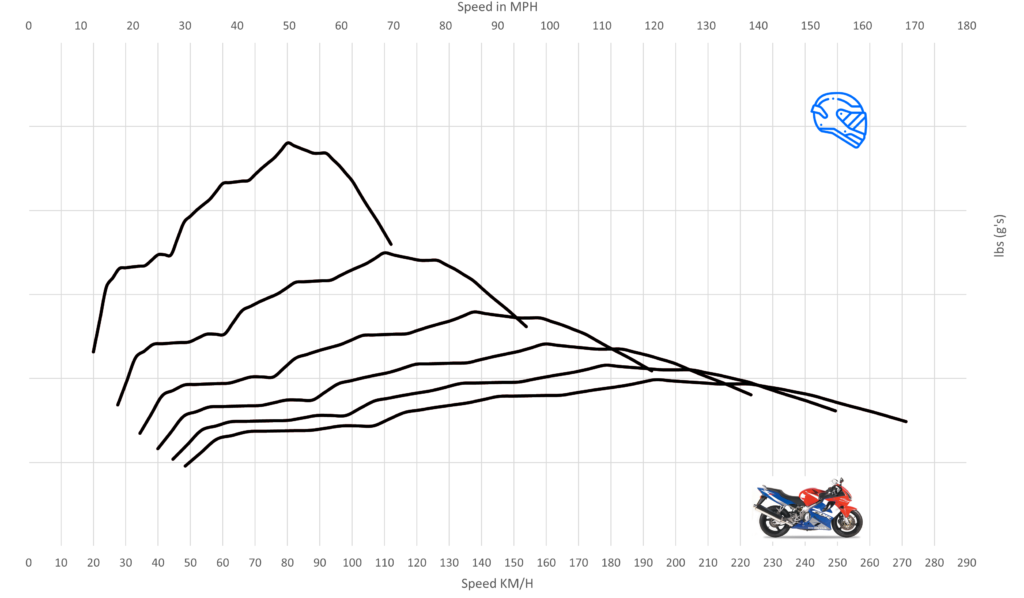 The engine does work well below 6000 rpm comparatively but like just like many motorcycles in its class it loves to rev but also typically provides more drive from 6000 rpm – which is much lower than on the tachometer if compared to rivals such as the Yamaha R6 that don’t really get going until 9000 rpm.

This you can clearly see in the in-gear thrust curve with the jump in acceleration that occurs above 5500 rpm in each gear. This is often described as ‘coming on cam’.

As it is a 600 cc motorcycle, working the gearbox to be in the right gear will provide the best results but you can afford to run a gear higher than many competitors and still get the job done in most situations, and without waiting for it to spool up.

In sixth gear at 70 mph, highway speeds the CBR600F4i’s rpm is right where the engine is starting to pick up, so this makes overtaking slow-moving traffic a breeze.

Don’t expect huge acceleration, instead watch the revs and speed pick up nicely with the CBR getting the job done safely.

As the CBR600f4i has 14,000 rpm to play with that provides a good speed range in each gear, if you were in a real rush, you could go as low as second gear for that overtake with rpm jumping to around 10,000 right in the peak torque.

It is not necessary though as probably the lowest you’d need to go for a swift overtake from 70 mph would be fourth gear.

Around town, you mostly find your rpm below 5000 with second or third being the sweet spot. If you really want the rpm low perhaps to save fuel fourth will do it but there is not enough torque for decent acceleration to get you out of trouble.

Out on country roads when upping the pace and having fun, running higher gears with lower revs defeats the point on a 600.

So, really you should be showing at least 7000 rpm and above regardless of the gear you are in and there will be enough acceleration to keep friends in sight. with 6000. If you are really on it and chasing more powerful motorcycles 9000 to 14000 rpm where the tacho needs to live.

The CBR600f4i is a quick bike and very easy to get the most out of it.

It might be an old motorcycle, but it provides a very similar outright acceleration experience to any modern 600 and has the legs of some new entrants into the more practical Supersports class, such as Honda’s own CBR650R and the Aprilia RS 660. It can even trade blows with Ducati’s Supersport.

The clutch feel for the CBR600f4i is good so ensures that those GP starts are not too difficult to nail.

The CBR is light too at around 170 kg dry and with almost 100 horsepower it surprisingly isn’t a wheelie machine. Earlier R6’s and others wheelie a lot easier on the power in first gear.

Get that right and you can expect the CBR600F4i to hit 100 mph in 6.65 seconds. Not bad at all. Most decent runs would be around the seven-seconds mark.

While it is quite possible to get these old CBR600s into the tens at the strip our example scored 11.09 seconds with a terminal speed of 126 mph.

If you’re riding a stock bike and know how to ride and weigh under 90 kg, low 11s can be expected consistently for the quarter-mile dash with only the Aliens dipping into the 10s

The CBR600F4i will be within a whisker of the latest R6 or a ZX-6R at the strip but from 120/130 mph, their extra power up the top of the rpm will ensure that they gradually walk away from the old CBR. It is not embarrassing at all, and not the difference you would assume 20 years would make.

Outright the CBR600F4i pulls out respectable numbers too. It’s roomier and provides more protection than the modern 600’s so getting the best out of her is not as difficult or physical.

There really is no drama, just tuck and feed her gears. With a few runs, the CBR600F4i hit a real top speed of 156 mph, (250.7 km/h) despite the speedo showing more optimistic numbers.

With the stars aligned 160 mph is doable but not today.