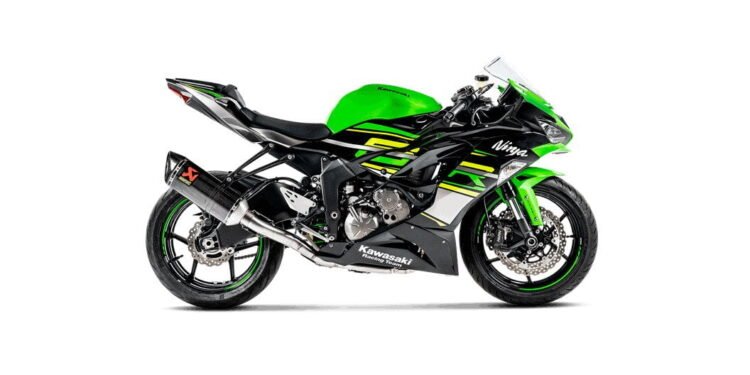 The Kawasaki ZX-6R has been with us since as far back as 1995. It’s had a long and lasting reign at the top or close to the top of the class over the years.

We have seen many variants of this wonderful machine over the years and it still can be bought new today.

It has always been at the pointy end of the 600 cc Supersport class, trading blows with competitors and leaving many scars in the process on the road and the track.

Both models were sold together as the former needed to remain under 600 cc for homologation purposes to be eligible for Supersport racing.

The while the (636) model was sold alongside the smaller engine variant and was the choice for many road riders between the two.

It is not clear why Kawasaki opted for a slight engine capacity boost for the Kawasaki ZX-6R.  Sure a bigger engine means more power, so it can’t hurt.

But what was clear is that in a world of 600 cc motorcycles becoming more extreme as their engines chased more rpm and power, these machines became less usable on the road.

That 37 cc extra, while small actually had a dramatic effect on what was already arguably the strongest engine in the class.

There was more peak power, but more importantly, power and torque throughout the entire rpm range are up significantly over the 599 cc ZX-6R and rivals too.

This ensured that the engine on the ZX-6R 636 retained much more useability on the road while still providing 600 Supersport top-end power thrills. 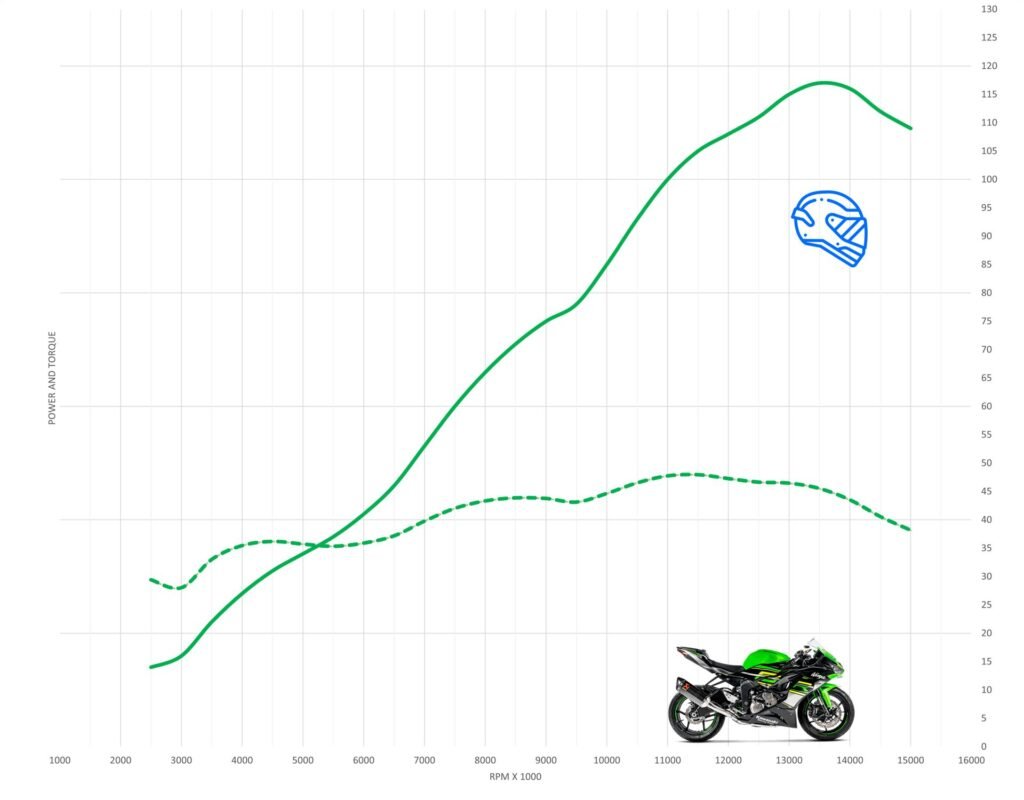 The ZX-6R 636 delivers Its power in a very smooth and flexible manner that provides the most power of the sub 650 cc four-cylinder class of motorcycle.

Unlike many four-cylinder Supersport class motorcycles, the ZX-6R engine is very flexible and offers exceptional drive compared to rivals.

From as low as 4000 rpm it drives exceptionally well but like all 600 Supersports, it does like to rev, with the engine picking up thrust and acceleration really strong from 7000 rpm.

and then another purposeful kick at 9500 rpm where it drives strongly to 14000 plus rpm.

The engine is brilliant and offers 750 four-cylinder performance while being faster than many 1000 cc Superbike twins from yesteryear. The Kawasaki ZX-6R 636 has a fantastic engine for the road.

It has that wild screaming top-end power we would expect and also love from a 600 Supersport but without any major sacrifice to acceleration at more sensible rpm.

We are still talking a 600 cc motorcycle so you will never be able to be as lazy with your gear choice as much larger capacity motorcycles.

The Kawasaki ZX-6R 636 really does surprise with the kind of drive from the engine it provides, even when the revs drop below 6000 rpm which is a point most Supersport 600s almost give up.

There is still a remarkable amount of drive available, and something more similar to a 750 cc engine from say a Suzuki GSX-R750.

On very slow and tight corners there is plenty of power to use second gear from very low rpm and drive out of the corner hard.

Rivals would often need first gear otherwise they’d be bogging down as if they suffering some kind of turbo lag.

On many roads that combine faster and slower corners,  the ZX-6R 636 can use only third gear and use that wide speed range of the gear that will take you north of 110 mph.

You can let the rpm drop to as low as 6000 rpm and around 45 mph and the ZX6R 636 will still pick up and drive with enough enthusiasm out of the corner.

Dropping a gear to hunt for more acceleration is not always required to get out of the corner, whereas on rivals you would most definitely need second gear.

For swift and safe overtakes there is absolutely no need to drop a gear, as acceleration initially is responsive and builds progressively.

Before you realise you’re doing 100 mph and the vehicle you have just overtaken is a distant memory.

In top gear, the Kawasaki ZX-6R 636 actually provides more acceleration (in top gear) from 70 mph than many litrebike twins past and present. It’s very impressive.

Even a Ducati Panigale V2 would not be safe and would require fifth gear to get away from the Kawasaki.

The Kawasaki ZX-6R 636 is geared almost perfectly for the road and for the power it has available.

Rivals like the YZF-R6 and CBR600RR really struggle in comparison anywhere in the rpm below 7000 rpm.

In particular, the YZF-R6, generally only feels quick above 8-9000 rpm and requires working the gearbox much more than any other 600 cc Supersport.

The only other motorcycle in the class that provides a similar engine performance is the Triumph Daytona 675.

The Kawasaki ZX-6R is arguably the fastest accelerating Supersport 600 as stock and puts down faster times than many larger displacement motorcycles past and present.

For many years though its closest rival would be Yamaha’s  YZF-R6.

With a very impressive 117 horsepower at the rear wheel moving lightweight package, the Kawasaki ZX6R 636 is no doubt a formidable machine in a straight line.

Thanks to a good clutch with a nice feel,  launching is not hard with it being very easy to be consistent time after time.

Thanks to the strong engine, there is little risk of bogging down if you don’t slip the clutch effectively and lose some rpm.

The Kawasaki ZX-6R 636 has more than enough drive in first gear from 5000-6000 rpm to not lose too much time when launching.

Of course, ideally, though you really want to be slipping the clutch 7000 rpm or higher for the best results.

You have to watch for wheelies as the ZX-6R 636 will easily lift in first gear from anywhere above 7000 rpm in first gear but is much more controllable than many much more powerful motorcycles.

From there on the ZX-6R charges extremely hard to achieve 0-100 mph in only 6.02 seconds which is getting close to litrebike territory.

The Kawasaki ZX-6R can also comfortably get into the tens in the quarter-mile sprint with a class-leading 10.74 seconds and a high 134 mph terminal speed.

That high terminal speed shows jus how strong the ZX-6R’s top end is for a 600 Supersport.

This little pocket rocket can really give larger-capacity motorcycles a fright. GSX-R750s, F3 800s and 848s etc are not entirely safe from a hard-charging ZX-6R 636.

It is only after that point that the acceleration of the ZX-6R finally starts to relent as it makes its way to achieving a top speed of 164 mph.

That top speed is an amazing top speed for what is after all a stock 600 Supersports motorcycle.

In the hands of others, these ZX-6Rs have been known to hit a real 170 mph and can nudge close to 180 mph with a full exhaust system and tune.

Dragy’s benchmark 60-130 mph time is also incredibly competitive at only 6.60 seconds and can be achieved starting in first gear.

Many litrebikes struggle for consistency with their Dragy 60-130 mph times as it’s extremely hard to use all of the potential of their first gear.

On the ZX-6R 636 you can nail first gear and easily enough control the wheelie, and then just feed it second, third, and fourth gear successively at 14,500 rpm

That 60-130 mph time is only around 1-2 seconds slower than the fastest litrebikes and gets very close to and even beats some older litrebikes.

Kawasaki’s ZX-6R 636 is a missile and pretty much the fastest ‘600’ you can buy, and will likely remain that way. 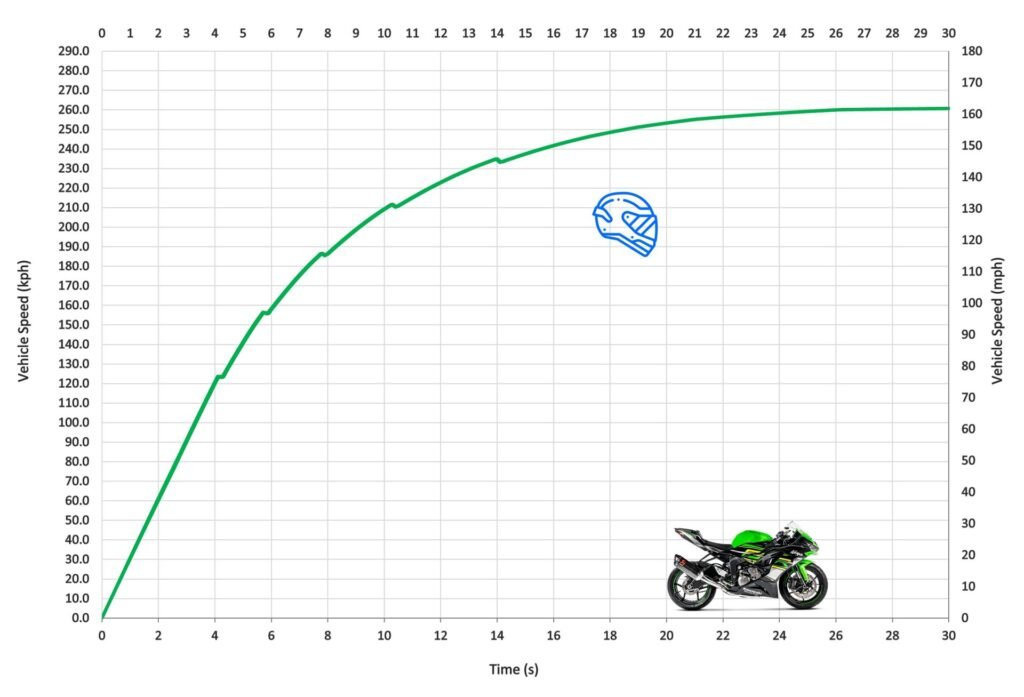