by Fabio Rossi
in Motorcycles, Sportsbikes, Versus 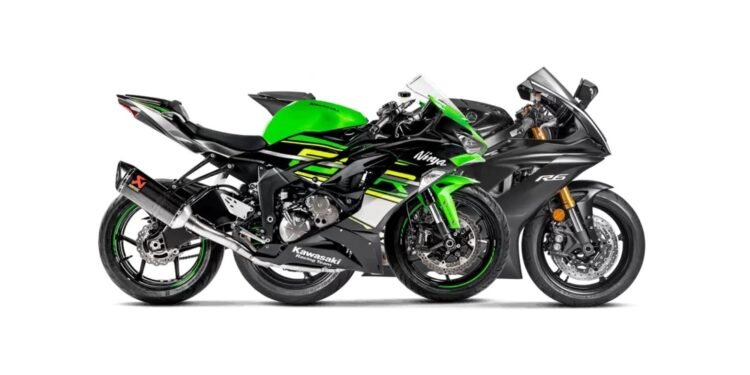 The Supersport 600 class is no longer. Manufacturers have abandoned the class due to changing macro factors as well as rider tases.

Manufacturers are now diverting their attention to somewhat less powerful motorcycles that still provide good performance while being cheaper and much more practical.

This does not mean that Supersport 600s are dead, as there is still much interest from new and existing riders, and plenty of motorcycles available still in the secondhand market where great bang for buck can be found.

Two of the most popular motorcycles for many years now in the Supersport class are the Yamaha YZF-R6 and Kawasaki’s ZX-6R (636). Both motorcycles compete in the same Supersport class but the Kawasaki ZX-6R has a 37 cc advantage over the Yamaha YZF-R6.

This capacity advantage may sound small but it has been a major selling point for the Kawasaki ZX-6R 636 over the Yamaha YZF-R6.

One of the major criticisms of Supersport 600s is how focused and radical they have become.

With engines revving super high to hit those headline peak horsepower numbers which have come at a cost of useable power and torque lower down in the rpm.

Kawasaki had the right idea by adding some capacity to their ZX-6R while also selling it alongside the 599 cc counterpart that was still eligible for Supersport racing.

Yamaha did not bother to offer a fatter version of the YZF-R6, rather incrementally adding more rpm and power to the YZF-R6.

Due to Yamaha’s efforts, the YZF-R6 is the most successful Suprtsport motorcycle on the race track, but its strengths on the track were in some cases liabilities on the road.

Yamaha claims 123 horsepower for the latest YZF-R6. A figure that is down a little on the outgoing version.  This is due to ever more stringent noise and emission regulations.

Kawasaki on the other hand claims a max power at the crank of 126  horsepower and 52 ft/lb.  the latest model is also a little down on older versions for the same reason.

These are horsepower numbers that match and beat 1000 cc V-Twins and 750 cc four Superbikes from the late 90s and early thousands. Incredible!!

This is still a very good number considering that the YZF-R6 is down on engine capacity compared to the Kawasaki ZX-6R 636!

If we compare the town on the dyno curve throughout the rpm range, not only does the Kawasaki ZX-6R make a lot more peak horsepower and torque, but it also dominates significantly throughout the entire rpm range.

This massive torque and horsepower advantage ensures that the ZX-6R has a distinct a edge in the real world on the road.

This will often mean that the Kawasaki ZX-6R 636  can run a higher gear or drive just as hard as the YZF-R6 from as much  2000 rpm lower in the rpm range.

The Kawasaki ZX-6R curve is much smoother with fewer peaks and troughs while the Yamaha YZF-R6 has many little flat sports and peaks that are not ideal.

The Yamaha YZF-R6 curve does not feel so bumpy on the road, but the little dips and surges are still noticeable and represent flat spots in acceleration.

To get move on, you must keep the Yamaha YZF-R6 engine above 9 or 10,000 rpm if you want to have good acceleration available to you, anything lower and it really feels lacking compared to its competitors and even in isolation.

While the Yamaha YZF-R6 is definitely one of the fastest Supersport 600s ever,  it certainly is the peakiest and requires the most commitment with the engine and gearbox.

The Kawasaki ZX-6R on the other hand feels like jumping on a 750 after the Yamaha YZF-R6.

It drives exceptionally well from as little as 6000 rpm making it one of the best if not the best overall engine in the 600 Supersport class even if Kawasaki cheats with their 37cc engine capacity advantage. The above graph shows the torque curve multiplied by the gear rations. The lines you see are the acceleration you feel when you open the throttle.

The great thing about in-gear thrust curves is that you can see what kind of performance the engine has in any gear and at any speed.

One engine may produce less torque than another, but if it has lower gearing it can be more accelerative because it produces more thrust.

If you just look at a dyno curve alone, it won’t give you the full picture of what kind of performance an engine has other than its raw numbers.

The thrust curve will always follow the exact same trajectory as the torque curve with the thrust curve becoming less condensed the higher the gear as you can see above.

If you take a look, it is not hard to see that the Kawasaki ZX-6R dominates in all gears and at any speed if comparing the same gear.

There is not a point at any speed or in any gear where the YZF-R6 matches let alone beats the Kawasaki ZX-6R 636.

This is despite the  Kawasaki ZX-6R running slightly higher gearing for all gears.

This is because the Kawasaki ZX-6R 636  still has enough of a torque advantage to still provide more thrust and acceleration in each of the six gears.

There is just nowhere the Yamaha YZF-R6 can match the Kawasaki ZX-6R gear for gear.

What the thrust curve demonstrates is that in any gear at any speed if having a roll-race with your mates, the Kawasaki ZX-6R will be more accelerative than the Yamaha YZF-R6.

Though the Kawasaki ZX-6R 636 has a slight edge when push comes to shove.

the sprint from 0-60 mph for both is almost neck and next but has the Kawasaki ZX-6R 636  a few bike lengths ahead.

The Yamaha YZF-R6  is very close scoring a 0-60mph time only two one hundredth of a second slower,  at only 3.19 seconds.

These times are just as quick as any current 1000 cc Superbike which is very impressive.

Both are not too hard to launch but will happily wheelie hard in first gear.

The Yamaha YZF-R6 is much more likely to bog down if you do not use enough rpm or don’t slip the clutch effectively.

So you really must keep the Yamaha YZF-R6 rpm at where peak torque is produced which is around 11,000 rpm.

Any lower is not optimum, and if the rpm drops below 8000 rpm the actual risk of the engine bogging down if the clutch is fully engaged is higher for sure.

The Kawasaki ZX-6R  636 on the other hand is easier to launch and less dependent on the rpm you slip or fully engage the clutch.

Just like the Yamaha YZF-R6, the clutch should be slipped where the Ninja produces peak torque, but you can afford to let rpm drop as low as 7500 rpm without too much of a negative impact on your ET time.

The Kawasaki ZX-6R remains slightly ahead when accelerating from 0-100 mph which it achieves in only  6.02 seconds.

Although the Kawasaki ZX6R 636 has a slight edge when accelerating from 0-60 mph and 0-100 mph, they are pretty much equally as quick.

For most people, the Kawasaki ZX-6R 636 will have the edge simply because it is easier to launch thanks to that flexible engine.

It’s still extremely close between the two with the Yamaha YZF-R6 a fraction behind at 10.89 seconds with a terminal speed of 133 mph.

Again there is nothing in it. Who wins will be completely down to the rider’s weight and skill.

Kudos to the Yamaha YZF-R6 for getting a lot closer to the Kawasaki ZX-6R 636 despite the on-paper numbers being much less favorable.

As the speeds increase though, those numbers start to advantage the Kawasaki, as starts to take control and slowly move away from the Yamaha YZF-R6.

The top speed for both motorcycles is very close with the ZX-6R hitting 164 mph and the R6 managing 161.3 mph.

But that extra seven horsepower up top advantage that the Kawasaki has is still enough to provide the ZX-6R 636 with a top-speed advantage over the Yamaha YZF-R6.

In summary, both bikes are awfully close to 130 mph with the ZX-6R 636 starting to slowly move away from the Yamaha YZF-R6 to 150 mph.

Then from 150 mph the Kawasaki ZX-6R 636 really starts to assert itself and beings to gap the Yamaha YZF-R6. but all in all, they are very close in terms of outright acceleration.

Put and out speed is very similar up to 150 mph so the main difference between the two machines would be the massively more flexible engine offered by the Kawasaki.

Once with mods such as full exhaust system, ECU flash etc both machines can produce upwards of 130 horsepower and things really start to even up even more. 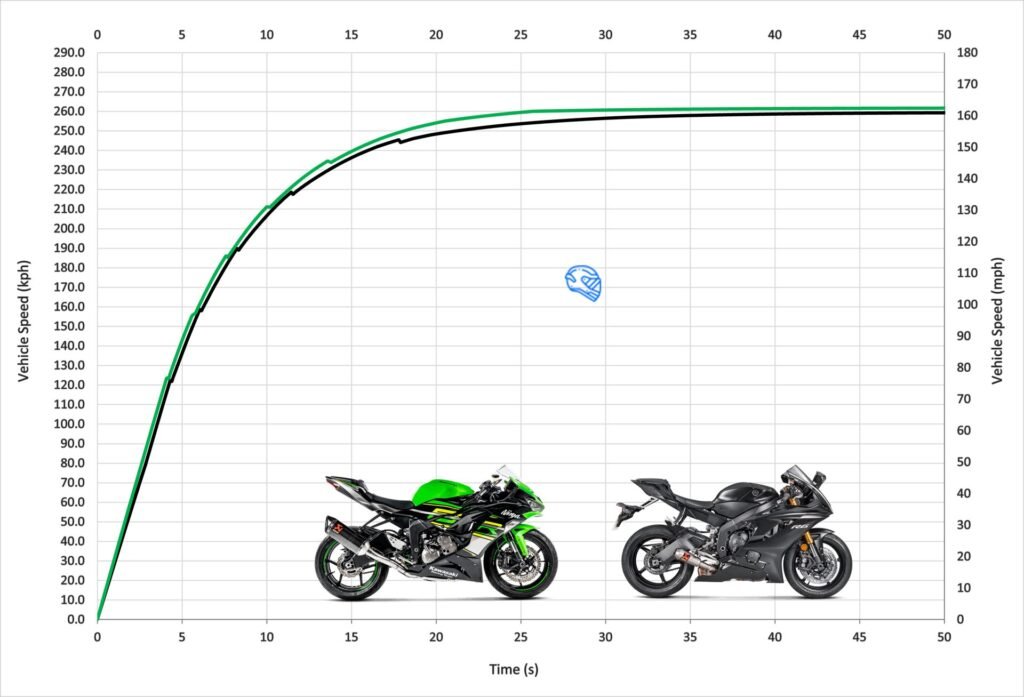 YZF-R6 vs ZX-6R 636 Acceleration through the gears