by Fabio Rossi
in Naked Bikes, Versus 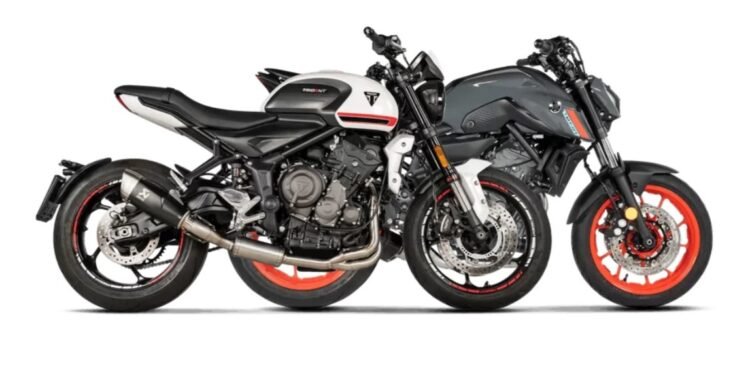 Triumph wanted a piece of the Yamaha MT-07’s success.

It’s not that Triumph didn’t already have a perfectly viable alternative to the MT-07 in the way of the Street Triple 675, which is a motorcycle that is more powerful and has better handling than Yamaha’s very popular naked.

Just that the Street Triple was more focused and came in more expensive, and didn’t always fit exactly, or nicely with specific learner regulations of some markets.

The Trident 660 was Triumph’s answer. A motorcycle that is similarly priced but more learner-focused. And while less powerful than the Street Triple, it comes equipped with an engine that at the very least can trade blows with the MT-07 and other rivals in the class.

The MT-07 has not changed much over the years with the biggest changes coming recently after a 2021 refresh. Power, torque, and the general recipe is the same as it was back in 2014 when first came to market.

Despite not being the fastest or most powerful it’s still the bike to beat in the class. 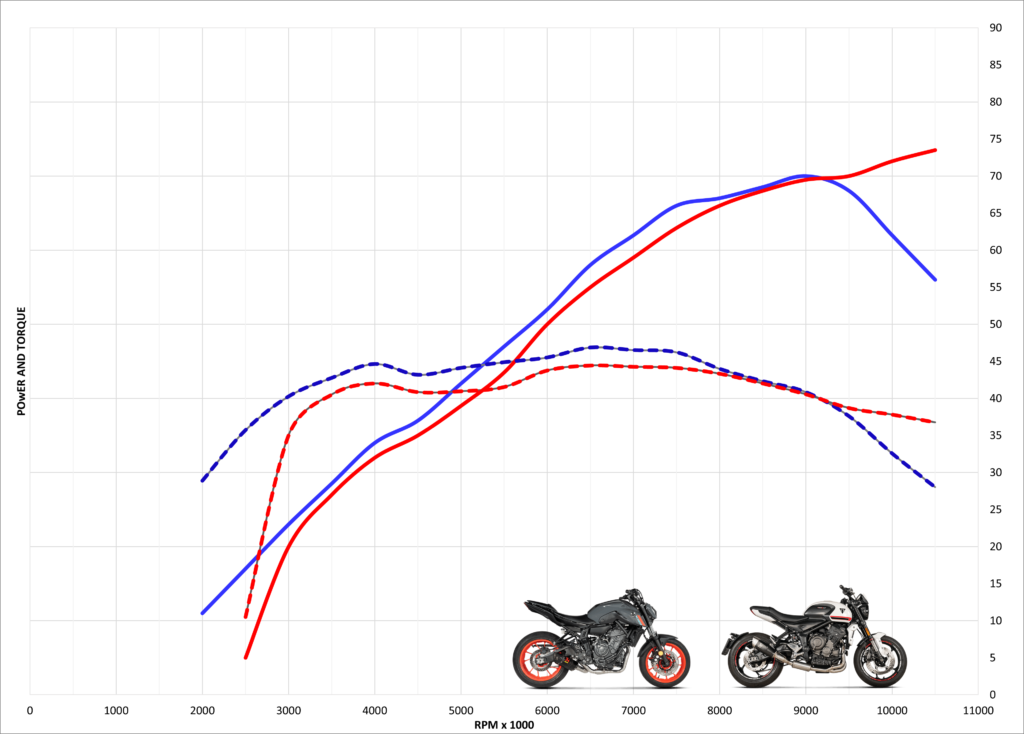 Both the MT-07 and Trident 660 not surprisingly share a similar displacement though the Yamaha sports a 30 cc advantage but gives away 1 cylinder to the Trident’s three.

A compact 689 cc Parallel two for the Yamaha and a 659 cc Inline three for the Trident respectively.

You can read a heap of marketing about why this is good but simply put the MT-07 sounds more like a traditional L2 engine and not like a CB500 or similar.

The Trident 660’s Triple cylinder configuration is also not hugely common, but we have been well acquainted with them from both Triumph and MV Agusta in recent years, and they sound and perform fantastically and are quite exotic, so definitely welcome to have such a nice engine equipped in an entry-level motorcycle.

Both motorcycles are similarly powerful if comparing the official numbers from their respective manufacturers, though the advantage goes to the Trident at 81 horsepower vs 73.4 for the MT-07.

On the Dyno and just like the claims suggest the Trident has the peak power advantage producing 74 hp produced right at the limiter and 44 ft/lb of torque at around 6400 rpm.

It looks like the Trident 660 would continue to make more power if the rpm limiter did not kick in so abruptly as the power is still reaching for the sky before the limiter spoils the fun.

The curve is great making great power and torque from a little over 3000 rpm and all the way to the limiter at around 10300 rpm with a nice little kick at 5500 rpm. The power curve (and aggressive limiter cut-off) looks very similar to many Triumph motorcycles over the years.

Yamaha’s MT-07 is 4 horsepower down at 70 horsepower bang-on 9000 rpm. Unlike the Trident power and torque does tail off sharply but does allow for decent over rev 1500 rpm past peak power.

Power delivery looks very similar for both, though the MT-07 does produce more power and torque pretty much from tickover all the way till 9000 rpm, which is where briefly the Trident 660 takes over and keeps making power until its rpm limiter spoils the fun, while the MT-07’s power falls off a cliff.

These very different outputs in the higher rpm mean that to make fast progress you must use each engine differently.

On the dyno, despite the Triumph making a little more power most of the time, the MT-07 is the stronger engine.

The power and torque advantage throughout the rpm range that the MT-07 has, can largely be put down to the 30 cc advantage over the Trident 660 but as it gives away one cylinder it can’t hold onto its peak as well as the smaller and larger in number pistons of the Trident 660.

Despite the dyno advantage of the MT-07, on the road, things look a little different. Gear ratios are a multiplier of torque, and Triumph has geared their Trident 660 very low, and arguably lower than is required.

This means that despite having less power and torque than the MT-07  almost everywhere (from tickover up to 9000 rpm) if we compare the available thrust/acceleration in each gear between the two, gear for gear and speed for speed the Trident punches a little harder.

When riding back-to-back, despite the slight in-gear thrust advantage over the Trident 660, the MT-07 feels faster off the throttle.

This may have something to do with the Trident having softer fuelling’ requiring large throttle openings to get the job done, while the MT-07’s is a little sharper on initial throttle opening.

While the Trident produces more thrust gear for gear, and speed for speed, it does need more rpm.

For example, if side by side with the MT-07 in the same gear, the Trident will be buzzing at a higher rpm.

Crack open the throttle and that advantage might mean a few bike lengths initially for the Trident all other things being equal, though as the Trident 660 is geared so short, you’ll be changing up sooner while the MT-07 is still in the same gear and now closing in on the Trident 660.

In isolation, the Trident motor is brilliant, though after riding the MT-07 the Trident is much more frantic and ‘thrashy’ compared to the MT-07 due to that low gearing and will need shifts at or close to the redline to keep the MT-07 honest, while on the latter shifting at 7500-9000 rpm is more than enough to keep the Trident 660 honest.

Triumph probably didn’t need to gear the Trident 660 so low, considering that its motor is more than strong enough to pull taller gearing while still providing top-of-the-class in-gear performance on the road.

It’s geared like a CB650R but without the 13000 rpm of the inline-four to take advantage of the lower gearing, so its speed range in each gear is limited because it revs more like a twin.

The MT-07 might make slightly less in-gear thrust, but as its gears are longer, it is more useful and requires fewer changes.

The Trident 660’s engine is excellent but the MT-07 just pips it despite the Trident making a little more up top.

9000 rpm plus is only visited when you are really going for it, and even then, that extra power doesn’t provide the Trident 660 with any straight-line advantage, due in part to the gearing, lack of revs and sudden limiter, as well as the Trident being heavier and slightly less aerodynamic than the MT-07. 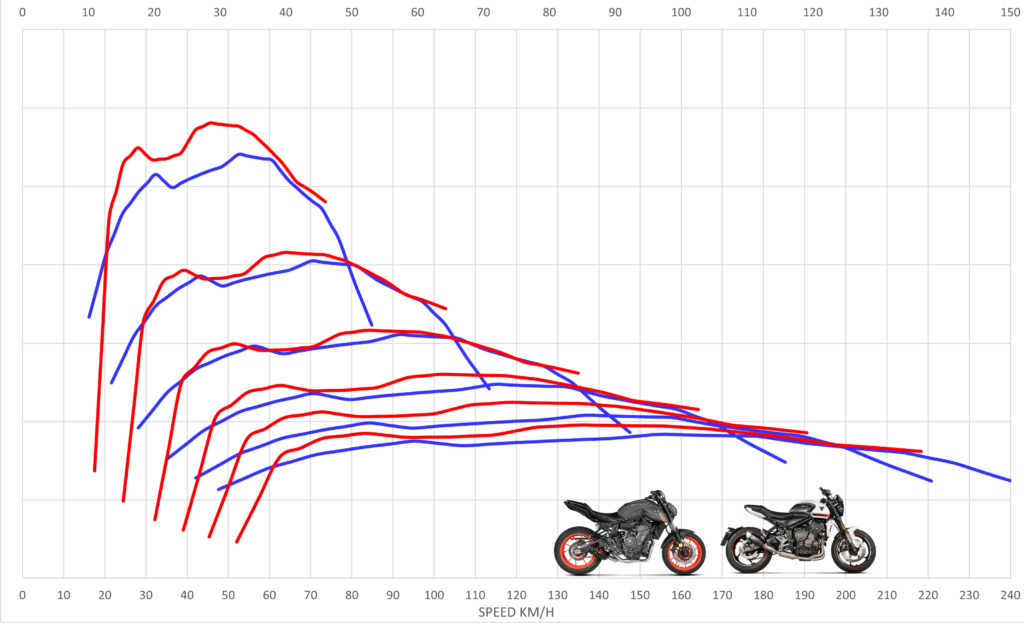 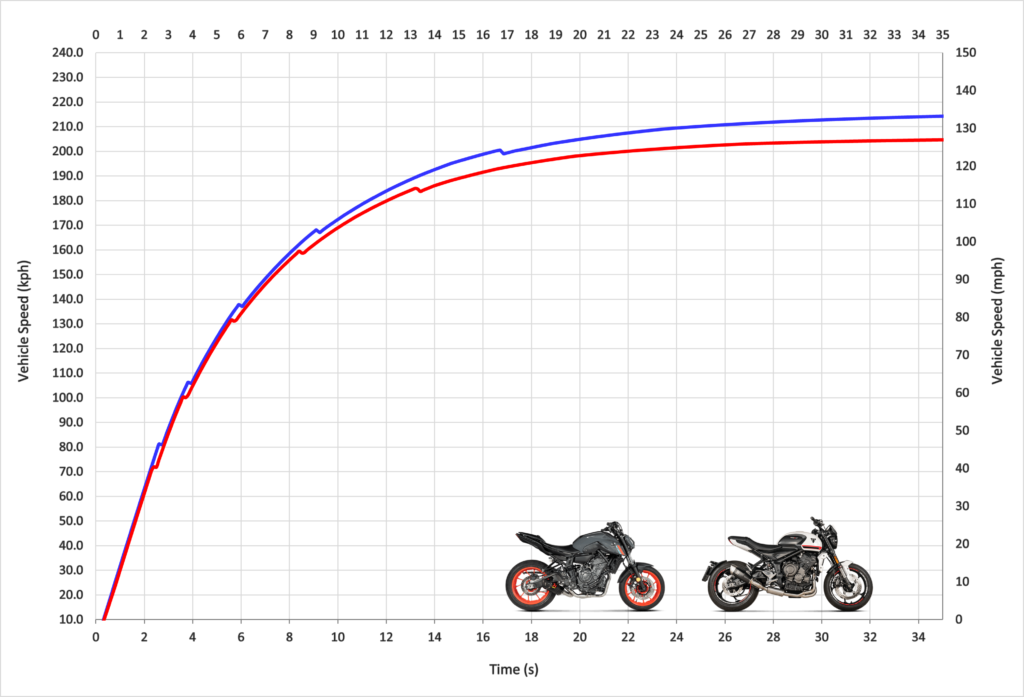 Trident 660 vs MT-07 Acceleration through the gears

The MT-07 is not the fastest in its class, that title goes to the CB650R and the more expensive Aprilia Tuono 660 which both make 10-20 horsepower more.

So the Trident 660 does not have to take down the fastest in class but it still has its work cut out as the MT-07 is no joke when banging through the gears, especially below 100 mph.

The MT-07 is pretty nuclear off the line. It likes to wheelie like no entry-level learner motorcycle has the right to.

Even the restricted versions will power wheelie easily at first. The Trident 660 looks softer than the MT-07 but do not let that fool you as it is pretty wheelie happy too in first gear.

From a dig, the Trident 660 is not too hard to launch, though most importantly to get the best ETs you must change up, right on the redline.

No short shifting or changing up a few hundred rpm short as ETs will suffer more than on the MT-07 or any other competitors.

This can be tricky as the little Trident does eat those low ratio gears very quickly in a fury of delicious three-cylinder howl.

Aerodynamically the Trident 660 suffers compared to the MT-07, as it has a wider more bulbous tank, higher bars, less roomy and the headlight doesn’t deflect the elements as effectively as the MT-07.

If you a not too large and can commit to a good tuck you’ll eventually see 127 mph, perhaps a little more on a better day or if you are of smaller stature.

The Trident is not a top-speed machine, more of a punchy street weapon but it will get you to 120 mph quick enough, but from then on, you’ll have to be committed and wait for that max speed.

Despite making a little less power than the Trident 660, the MT-07 is a little lighter and roomier.

You can tuck better and the little headlight acts like a dinky fearing and does a decent job at providing some protection. This does make itself felt with acceleration as the speeds get higher and drag starts to matter.

Just like the Trident 660, you must be committed to getting the most out of the MT-07 up top. It will do 130 mph all day long without the craziest of tucks and will top out at 134 mph for the most committed.

Downhill sections you can see an easy 140 mph plus.

Both bikes are hard to get close to their best ETA times as they like to wheelie with very aggressive launches. The Trident 660 is a little easier off the line but depends on very accurate gear changes right at the limiter which can easily be messed up.

The MT-07 on the other hand is not too fussy where you change up. You can change anywhere between 8000 and 9000 rpm and put out similar times.

In the real world, they are very close, and especially so under 100 mph. The MT-07 only consistently pulls ahead of the Trident 660 when above that speed though on most roads and situations 100 mph plus riding is the exception and not the norm. Below 100 mph they are so close that the difference will more than likely come down to the rider’s skill and weight or who has the quickest reaction times.