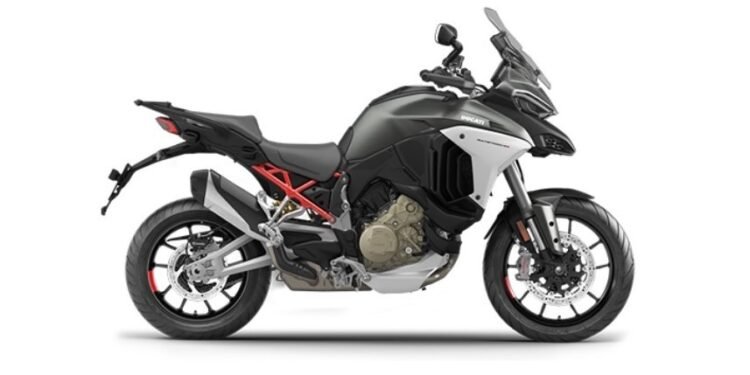 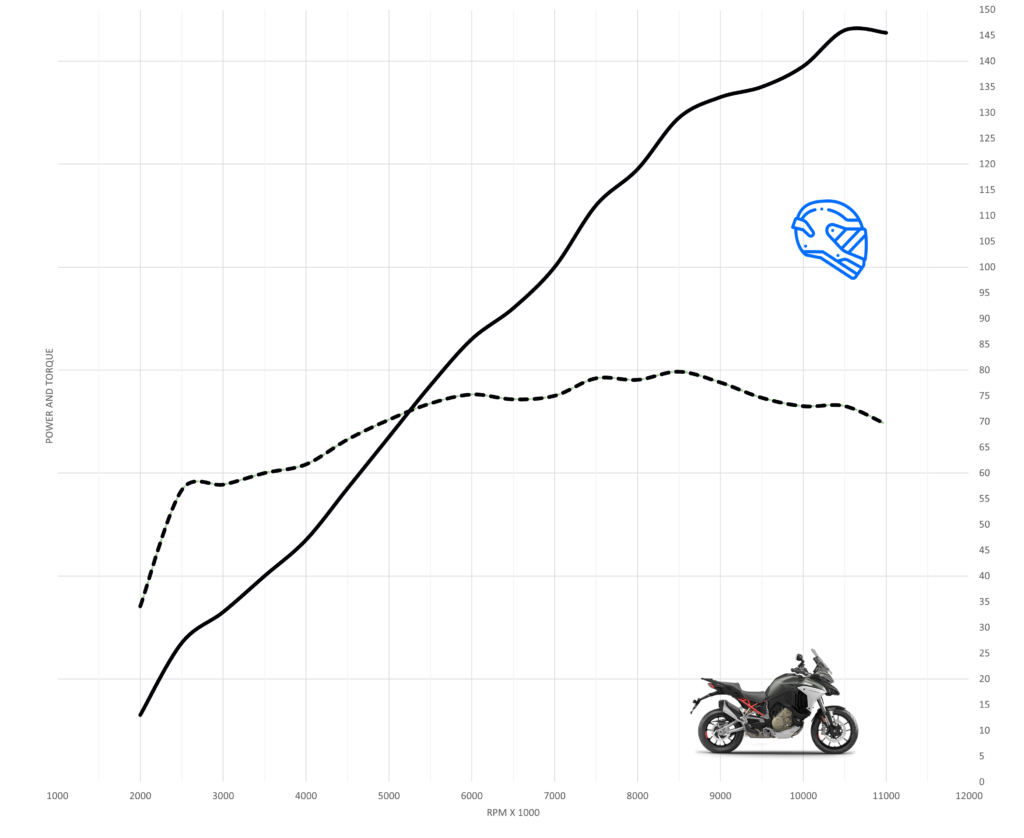 The engine of the new Multistrada V4 has a displacement increase of 55 cc to 1258 cc via the slightly wider bore but retains the same short stroke as the Panigale engine.

You may think that it was not necessary to increase capacity on what was already a large powerful and torque-laden engine, though the original V4 has a very short stroke that is designed to make power in the upper half of the rpm range.

We must also consider that the new Multistrada V4 engine replaces a torque-laden 1260 cc L2, so it needs to be at least as punchy down low if it is not to disappoint. Increasing capacity made sense.

Gone is the staple Desmo valve gear instead replaced with a conventional setup. Internal gear ratios and the final drive also have been changed to lower the gearing with only the primary drive being the same as the Panigale.

On the Dyno, we see 146 horsepower at 10,500 rpm and 80 ft/lb at a little over 8500 rpm, so perhaps somewhat off the claimed power if we take into consideration the typical 10% transmission losses. I’d expect to see a little over 150 horsepower at the rear wheel. Your results may vary.

Even if the Multistrada V4 is not the 200 horsepower beast it could have been, the tweaks that Ducati made have resulted in an engine that actually punches harder than the on-paper numbers might suggest and harder than the Panigale from lower speeds and rpm.

Peak power at the rear wheel is a little higher than the Multistrada 1260, though the Multistrada V4 has less torque throughout the rpm range even with a tactical capacity boost over the Panigale V4.

Despite producing less torque, thanks to excellent gearing choices the Multistrada V4 is a wickedly responsive engine anywhere you like. 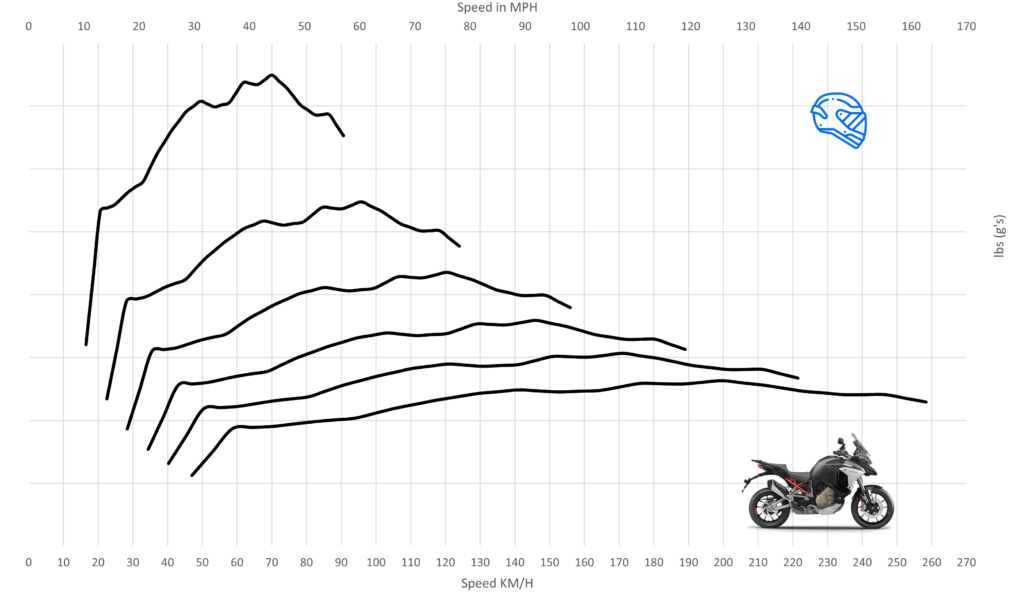 Compared to the donor engine the first four gears are much lower with fifth gear being the same. Sixth gear is longer for a more relaxed rpm and is likely chosen for better fuel consumption on the highway.

Even though the Multistrada V4 is heavier than the Panigale, thanks to the extra power and torque all the way to 8000 rpm, the Multistrada V4 will punch harder in the first three gears over the donor motorcycle until you must change gear.

We’ll have to compare the Multistrada V4 with the Multistrada 1260 but for now, I’ll add that the V4 is stronger in every gear from almost any speed despite producing less power and torque throughout the entire rpm range.

If you are comparing 1260 vs V4 dyno charts don’t assume that  the1260 punches harder in the midrange and bottom end due to more torque, as the gearing on the V4 counteracts this.

Due to the lower gearing over the 1260, the V4 will always be showing more rpm if directly comparing the same gear at the same speed and will have more acceleration available and pull a little harder as a result.

As the V4 uses more rpm it will add to the illusion that the 1260 is more responsive as it requires less rpm to provide comparable performance.

The V4 is more dominant in the lower gears with it being a little closer in the higher gears but the V4 punches harder in almost every gear for gear speed for speed scenario.

On the road, just like the 1260 the V4 engine is hugely responsive.

You can forget about worrying about what gear you are in, just twist the throttle and the V4 instantly responds with explosive acceleration and more so even than the Panigale V4 if the Superbike is anywhere below 8000 rpm.

This is particularly the case for the first four gears though that does not mean that fifth and sixth gear is not responsive, but fifth gear is the same as the Panigale V4 and sixth is longer, though fifth on the Multistrada ends up being slightly shorter due to the extra tooth on the rear sprocket.

Considering the extra 40 kg that the Multistrada carries over the Superbike and has 40 plus less horsepower at the wheels, it is remarkable how responsive the motorcycle is in real-world situations where it would jump ahead of most motorcycles on first crack of the throttle. 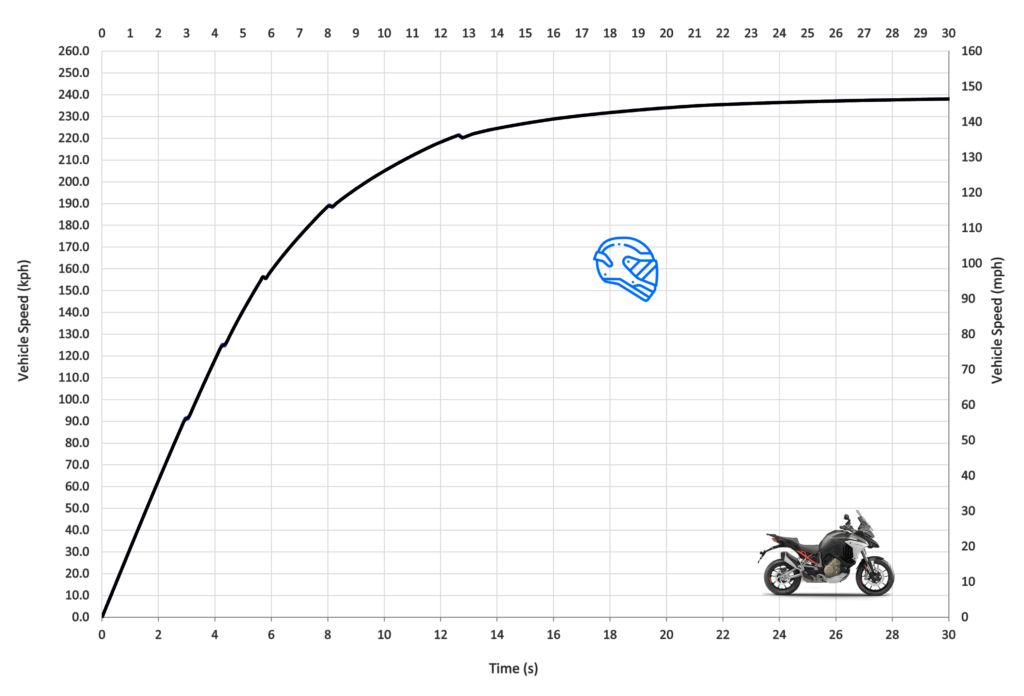 For such a tall, wide, and heavy motorcycle it is amazing how fast it is.

Just like its predecessor the Multistrada V4 is quite the weapon and has more power than many Superbikes from the early thousands.

With all the rider aids off despite the heavyweight, especially over the front end the Multistrada V4 will happily do one of two things. Wheelie or wheelspin when driving hard in first gear.

The Multistrada V4 is easy to launch and would make a great weapon at the lights.

The Scorpion Trail tyres are great but probably not best suitable for hard drag starts and can and will spin on the hardest launches right up to second gear if you don’t momentarily shut off and get back on it.

The sprint to sixty would be faster if the Multistrada V4 didn’t require second gear. Not much time is lost due to the excellent and almost seamless quickshifter that is one of the fastest and slickest on the market.

Due to the low gearing the Multistrada V4 ballistically eats each gear up, and in what seems like a blink of the eye scorches from 0-100 mph in a staggering 6.10 seconds not long after hooking fourth gear.

Many older motorcycles ergonomically like the Multistrada V4 would be done by 100 mph!

But in the age of these Hyper long-legged superbike powered all-purpose motorcycles, they keep charging well beyond 100 mph which is hard to get your head around. The New Multistrada is even more so than most other rivals in the class.

To nail this home in numbers we can all understand, the Multistrada V4 will lay down a quarter mile time of 10.82 seconds with a hugely impressive time terminal speed of 131 mph.

This kind of time ensures that the Multistrada is faster than most 600s and many Superbikes from the late 90s and early thousands.

Like all motorcycles in this class, the Multistrada V4 has an expansive and bulky-looking fairing and windshield.

Ducati has worked very hard to make it as slippery as possible but there are only so much their drag coefficient efforts can make up for the large frontal area.

A frontal area that has to part more atmosphere compared to a smaller and more compact sportsbikes as it cuts through the air with the large frontal area eating into that V4 power as the speed increase.

The Multistrada V4 offers excellent protection from the elements for the rider thanks to that frontal area and its heft, meaning that you don’t have to tuck too hard to get the Multistrada V4 to push on to silly speeds.

A real 140 mph comes up in no time but once into sixth gear some of that urgency starts to taper off as physics start to make their presence known.

The Multistrada will show 260 km/h plus all day long on the optimistic speedo, and that will be a real top speed of 149 mph.

I think that there might be some electronic nannying holding the big Multistrada back a little, which I am sure a flash could remedy and might have the Multistrada bouncing off the limiter in top gear.