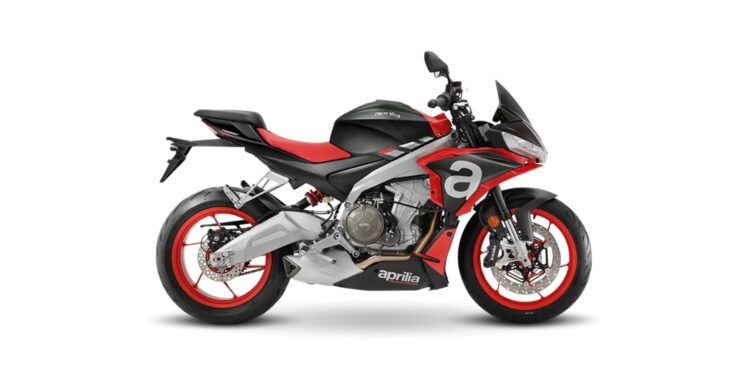 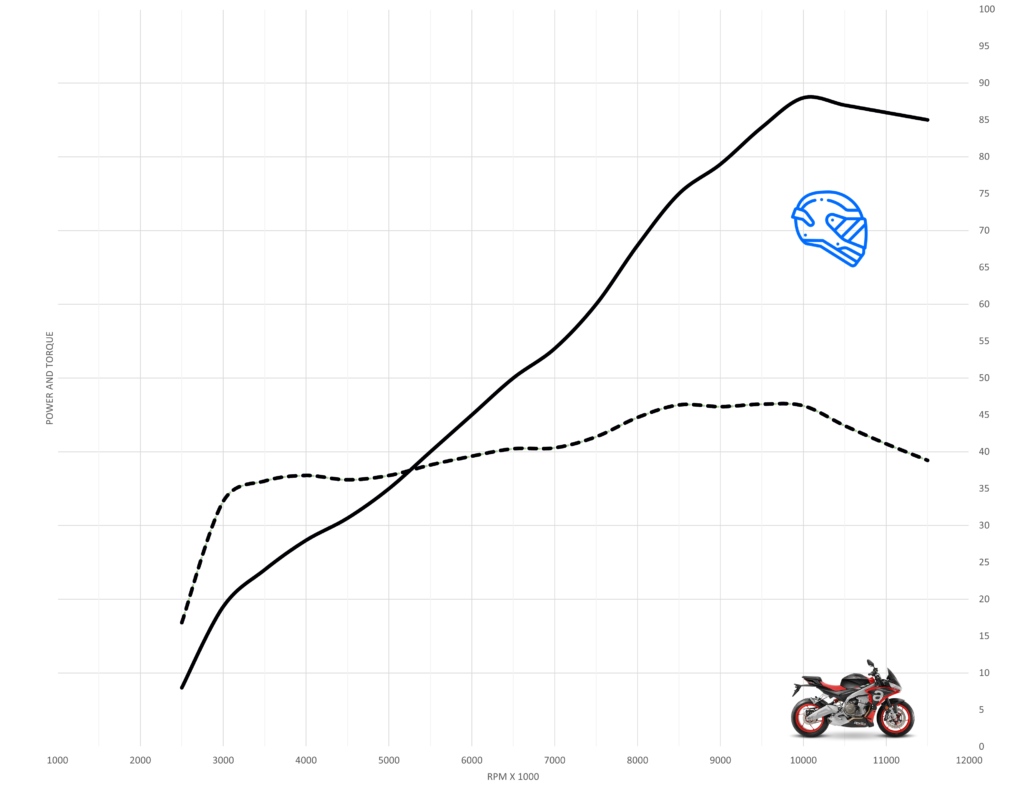 The Aprilia Tuono 660 shares the same impressive engine as the RS 660. Typically, we see naked and touring motorcycles that use donated sportsbike engines detuned a touch to offer a more ‘streetable’ and less focussed power delivery.

Aprilia thought that the RS 660’s engine would suffice as is and they are correct.

To achieve such an impressive output, what Aprilia has more-or-less done is use their RSV4 engine broad design as a base, almost splitting the V4 engine with a parallel twin being the result.

The size of the bore of the Tuono 660 engine is the exact same as the RSV4 1100, but the stroke is a fair bit longer measuring in at 63.93 mm, and not the mega short-stroke of 52.3 mm of the larger capacity and higher revving V4.

This extra additional stroke provides the extra capacity and would explain among other things why the Tuono does not rev upward of 14,000 rpm, though impressively still manages approximately half the power of the V4 – albeit it is not exactly half the capacity at 659 cc vs 1077 cc.

Either way, as the Tuono has horsepower per litre of around 150 horsepower which is the same as the original 98 Yamaha R1. Not bad.

At the rear wheel, we are looking at 88 horsepower though this is probably at the lower end of what these engines are capable of, as others have made over 90 at the wheels.

As with the RS 660, the engine provides good pick-up throughout the entire rpm range. The US versions due to emissions do have a nasty flat sport but it does not seem evident on the dyno or the road on non-US models.

There is good drive provided from as little as 3000 rpm where power and torque build nicely and linearly until around the 7000 rpm mark where things get interesting and the Tuono 660 just like the RS 660 picks up as if it was a four-cylinder engine and drives hard to 11,000 rpm plus. 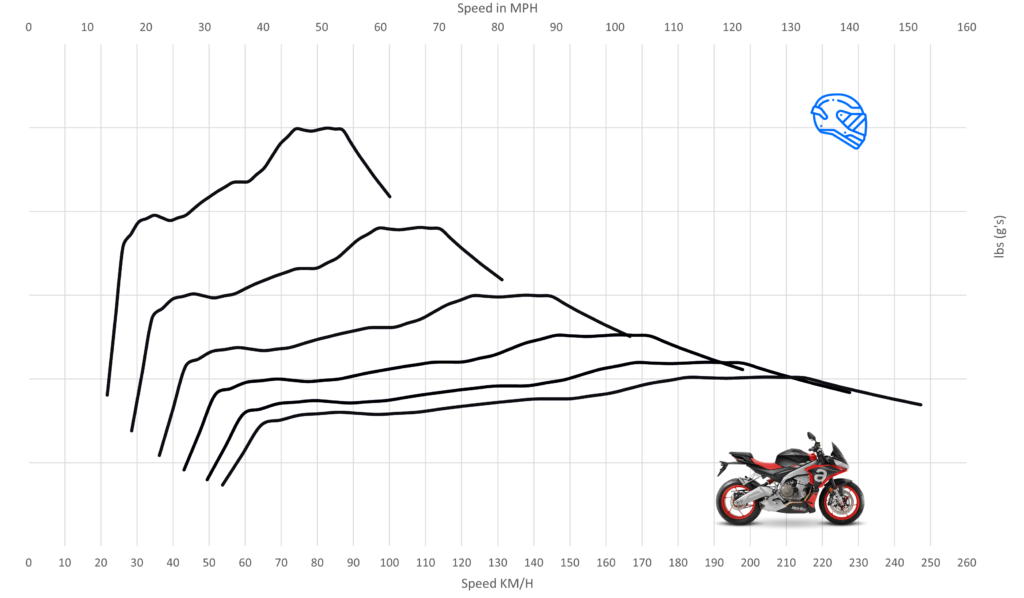 In-gear performance in the bottom and midrange is very similar to the CB650R though surprisingly the two-cylinder engine pulls harder in the last third of each gear courtesy of that extra 10 horsepower it has up top.

If being lazy with your gear choice you would expect more ‘grunt’ from a two-cylinder engine though that probably would have come at the cost of that nice rush as you drive it through 7000 rpm and leaving you perhaps with 10-20 horsepower less up top.

The MT-07 is an example of this as it has stronger in-gear performance from its similarly configured engine but is left in the dust at the top end of each gear.

Aprilia could have easily lowered gearing a touch and this would be easily remedied. A few teeth extra on the rear is something I would do if I owned a Tuono 660.

Top speed would not suffer as with current gearing the Tuono 660 is a fair few rpm short of the limiter.

Aprilia likely kept gearing the way it is because the engine is more than capable but maybe also for fuel consumption and noise/emissions regulations. 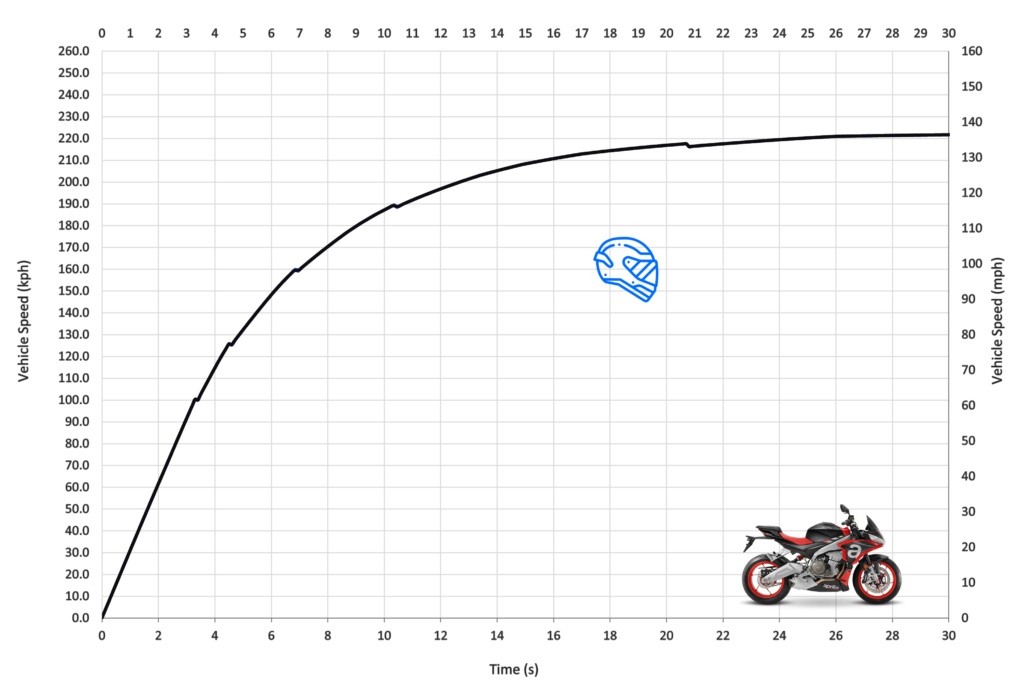 This has zero to do with one being faster than the other just having the stars align on the day.

You can put the difference down to the Tuono 660 being naked. And while there is a dinky faring that offers some protection the upright bars make it even more difficult to achieve a proper tuck on what is already a compact motorcycle.

0-200 km/h arrives a little after the QM and is achieved in 12.66 seconds. Very impressive for what is effectively a middleweight sport naked though it’s not quite at the top of the pack as the Triumph Street Tipple 675 has the slight edge

While the Aerodynamic disadvantage starts at around 100 mph it only significantly dents performance comparative the RS 660 from above 120 mph and after the quarter mile.

Impressively though the Tuono 660 still piles on the speed though you’ll have to be in an aggressive tuck to eventually hit its top speed of 138 mph. There is probably a little more in it, but conditions would have to be favourable, or you’d need to be a jockey sized so your results may vary either way.