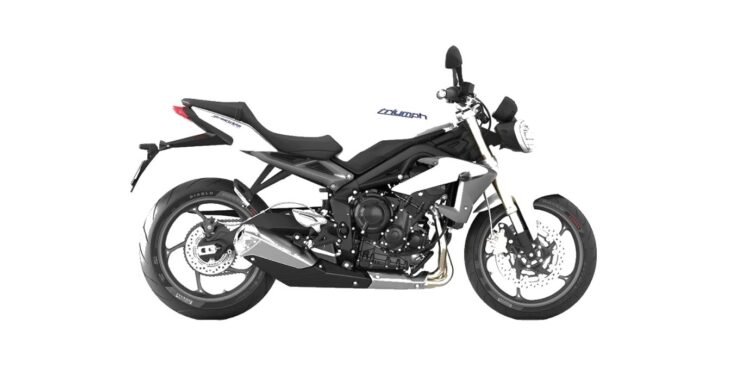 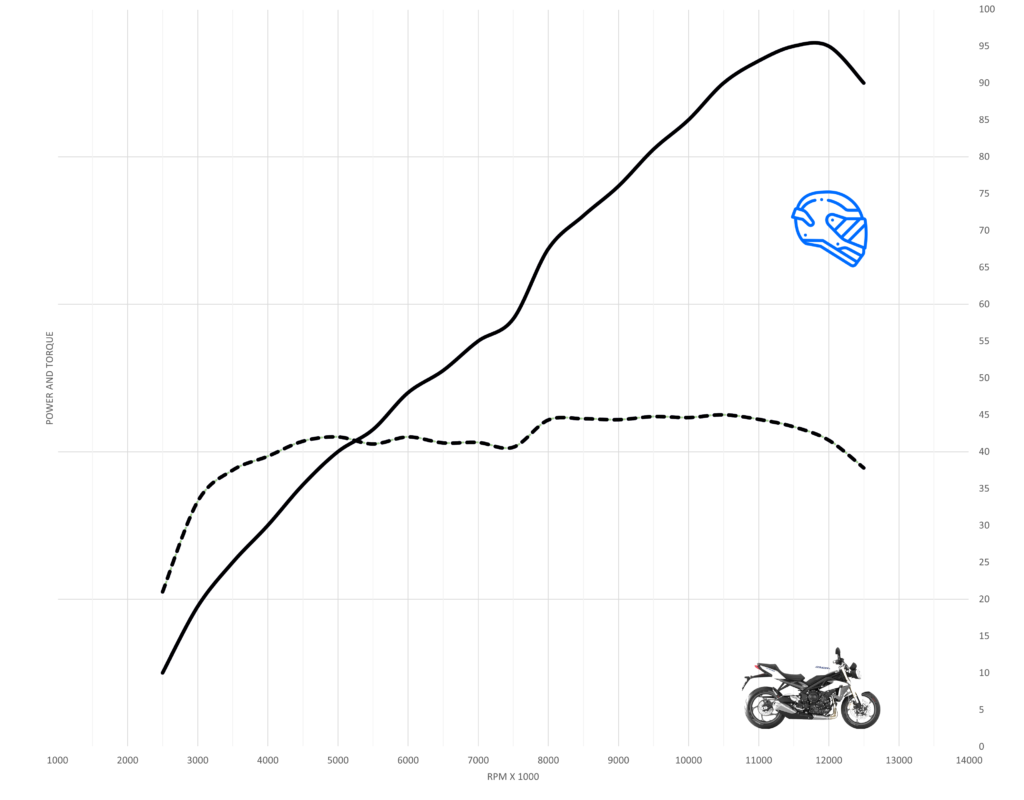 The Street Triple uses the same compact and powerful 675 cc inline three-cylinder engine as the Daytona 675.

Like many naked motorcycles that take their engines from their sportier siblings the Street Triple’s engine has been detuned a touch. Therefore, claimed output is 106 horsepower produced at 11,850 rpm with peak torque at 50 ft/lb at 9750 rpm.

If we factor in transmission losses of around ten percent, at the rear wheel the Street Triple 675 produces a very respectable 94 horsepower just shy of 12,000 rpm. And an impressively flat peak of 46 ft/lb spread widely from 8,000 to 11,000 rpm.

The Street Triple might be ten horsepower down on the Daytona, but it retains much of the Daytona’s strengths albeit with less peak power.

What we have is a high revving engine that has an impressive spread of torque that pulls cleanly from as little as 3000 rpm and offers only a fraction less than its peak torque output from 4000 rpm onward making for a very impressively responsive engine.

There is a nice little surge in acceleration from 7500 rpm where the Street Triple engine pulls very hard all the way to its 12,500 rpm limiter.

Most Supersport-derived engines are very top-end focused and only really come alive from 8000 rpm, providing anaemic acceleration below.

The extra 75 cc obviously helps with the low-end engine response but you have to give Triumph engineers some credit for the exceptional spread of power and torque. 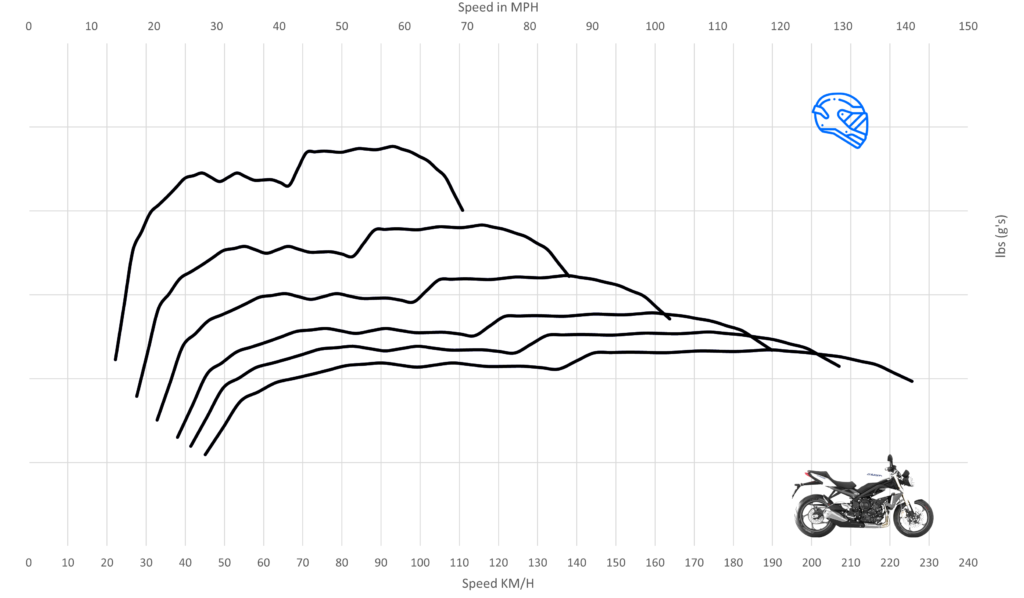 The Street Triple 675 has the same gear ratios as its Daytona sibling though Triumph opted for a 16 tooth front sprocket that reduces overall gearing.

The engine is flexible enough that Triumph did not need to reduce gearing but the extra thrust in all gears is welcome, as it makes what is already a very responsive engine more so.

For some perspective, the Street Triple is considerably stronger in gear than one of its closest rivals the Honda CB650R, and is stronger up top as well, thanks to the extra 10 horsepower advantage it has.

It’s only the MT-07 that has better in-gear performance though this is only in the first two gears, after that the Street Triple is stronger almost at any speed in any of the last four gears.

You can be lazy with your gear choice and just leave it in third gear on your favourite twisty road where you can use the torque to drive you effectively from as low as 30 mph all the way to over 100 mph.

The MT-07 would need third and fourth gear to cover the same speed range and provide comparable acceleration from the corner but would still lose out once in fourth.

At highway speeds, there is no reason to change down a gear too if wanting that quick overtake.

The Street Triple will drive much harder than other motorcycles in its class in top from as little as 40 mph and pulls harder than the grunty MT-07 in fifth at the same speed.

Due to the Strong engine and very clever gearing, the Street Triple 675 provides 750 like performance in real-world situations and has the sufficient top-end punch to match motorcycles such as the GSX-S750 too. 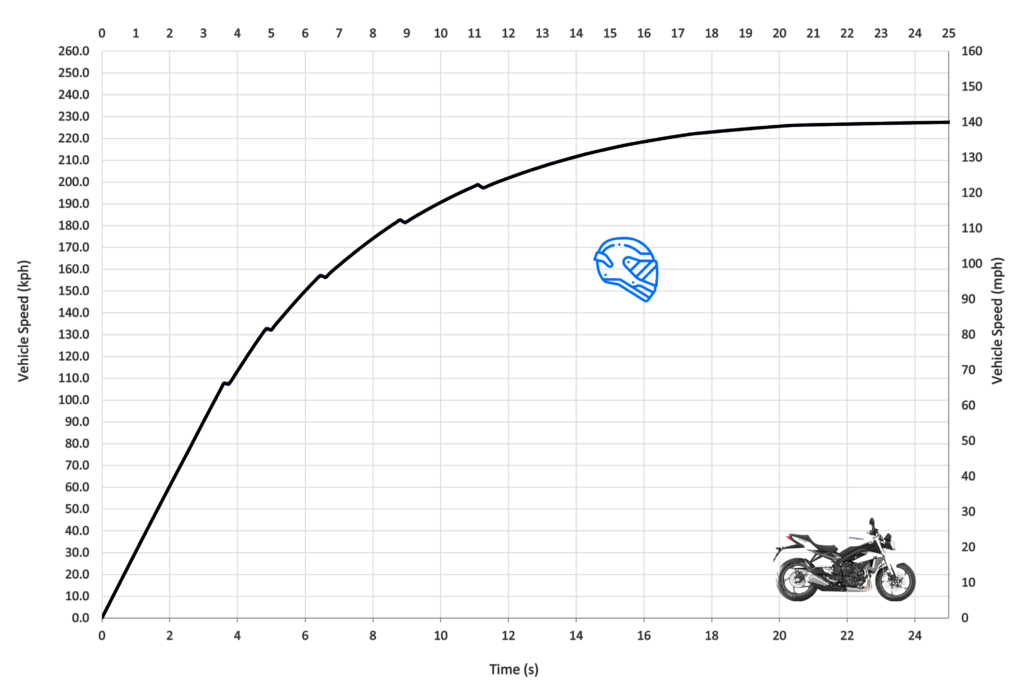 With 95 horsepower at the rear wheel and a wet weight of around 180 kg the Street Triple was always going to impress in a straight line and be one of the motorcycles to beat in its respective class.

This sentiment holds true as without too much effort the Street Triple will scorch from 0-60 mph in only 3.20 seconds and 0-100 km/h in 3.38 seconds

Despite the lower overall gearing first gear is still long and while the Street Triple is not a wheelie machine like the MT-07, it is a little more willing to lift in first gear with aggressive starts than some other competitors such as the heavier and less potent CB650R. Still, though it is quite easy to control due to the very flat torque curve and great fuelling.

Slipping the clutch and keeping the rpm above 8000 rpm is probably the most effective.

Due to the good low-down torque, you can afford to launch below 8000 rpm without fear of the engine bogging but once the clutch is engaged and rpm for instance at 6000 rpm, you do that torque surge at 7500 rpm to contend with, that will lift the wheel if you are flat on the throttle.

Change-up points in first gear and second gear are most effective as close to the rpm limiter as possible, and around 12000 rpm in third gear.

If you are continuing on from the 60 mph sprint, you’ll need to be hooking fourth gear to hit the tone, at which point the Street Triple will have accelerated from 0-100 mph in only 6.93 seconds

In the higher gears, you can change up a little before at or at 12,000 rpm for best ETs.

The Street Triple is probably one of the fastest in-class through the quarter mile scoring an 11.25 time with a terminal speed of 122 mph. There is probably even a high ten seconds in this bike with a better 60 ft time and a lighter rider.

Being a naked motorcycle top speed runs are often painful with the lack of faring meaning that holding on is a challenge. Equally naked motorcycles will lose a little of their top speed potential versus their fully wrapped equally powerful equivalents.

For the triumph though, ultimately, it’s the gearing and its 12,500 rpm limiter that is the deciding factor with the Street Triple 675 bouncing off the limiter in top at 141.7 mph.

The Street Triple does not rev as high as the Daytona which shares its engine, and it runs with one tooth extra at the front sprocket.

I’d imagine that the Street Triple could be game for an extra 5-7 mph with longer gearing or if the rev limiter was extended to match the Daytona via an ECU flash, then you’d be hitting 150 mph for sure which is impressive for a naked middleweight.