The MT-07 is more responsive but the CBR650R as the top end!

by Fabio Rossi
in Naked Bikes, Sports Touring Bikes, Versus 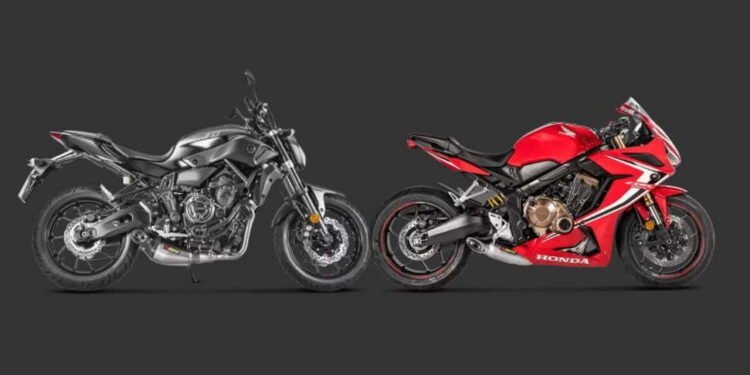 Both of these middleweight motorcycles are hugely popular and are often the first of a few choices occupying the top of the list for anyone looking for an entry-level sporty bike naked or faired.

While both the CBR650R and MT-07  occupy different motorcycle category types, with one being a naked bike and the other being a Sports Tourer, they both share the same class due to their price and similar performance proposition.

While in the same class, both the CBR650R and the MT-07 provide a different experience from the perspective of their engine type and the performance each offer, with one being a traditional 4-cylinder inline, and the other being a conventional inline two.

Though the Yamaha MT-07 does have a crossplane fire order that makes it subjectively sound better than the more common fire order of an inline parallel two.

We often hear that the 2-cylinder bikes at a similar capacity offer more torque at the middle and bottom end and where it counts versus their 4-cylinder counterparts which tend to perform better at higher rpm. So let’s see how this stacks up. 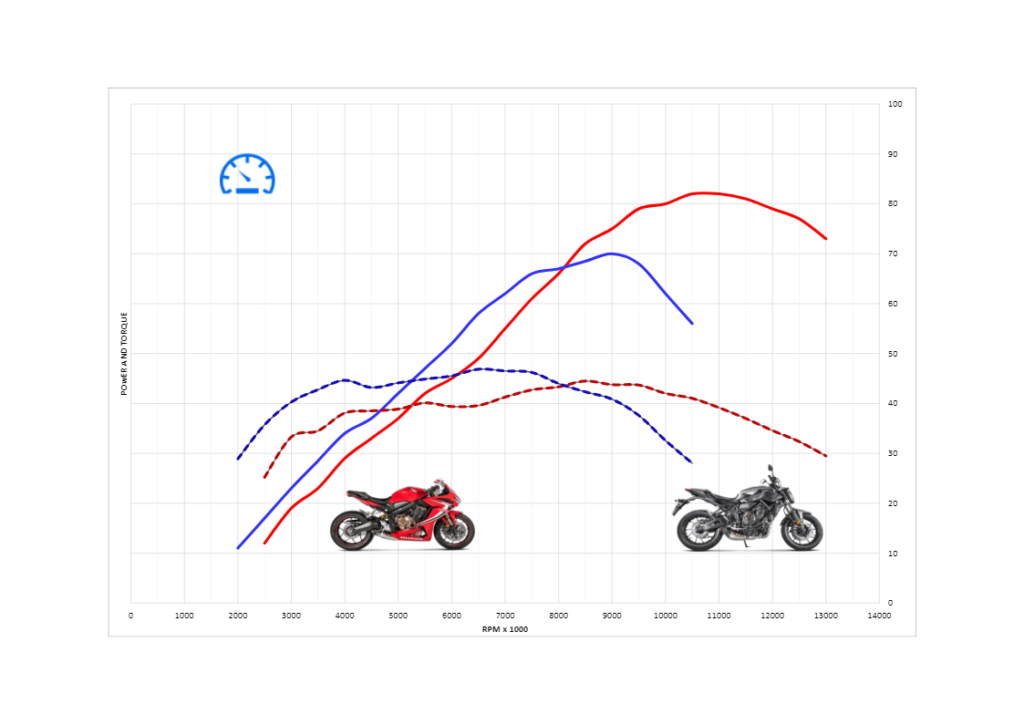 Both engines are a similar capacity though the MT-07 does have a 40 cc advantage. This will provide the MT-07 with a slight but measurable advantage at the very least in terms of torque produced throughout the range.

The dyno sure is no surprise here, with the Yamaha MT-07 making more power and torque right through the rpm range and only being bettered above 8000 rpm.

The MT-07 falls flat after 9500 rpm whereas just before that it makes its peak power of 70 horsepower.

The CBR650R in typical inline 4 fashion continues with enthusiasm until it reaches its peak at 82hp @ 10500 rpm with it not tailing off as rapidly as the MT-07.

The MT-07 makes good torque from tickover and accelerates and wheelies in first and second as if it had a bigger more powerful engine.

The CBR650R offers good bottom and midrange torque for its engine configuration type and capacity but you really need to be above 3000 rpm otherwise the motor is a little sluggish in isolation and compared to the MT-07.

From there on it is typical turbine-like 4-cylinder performance, with a nice little kick at 6500 rpm which is where the engine really comes alive and likes to stay above for best progress and will then scream all the way to 13000 rpm. 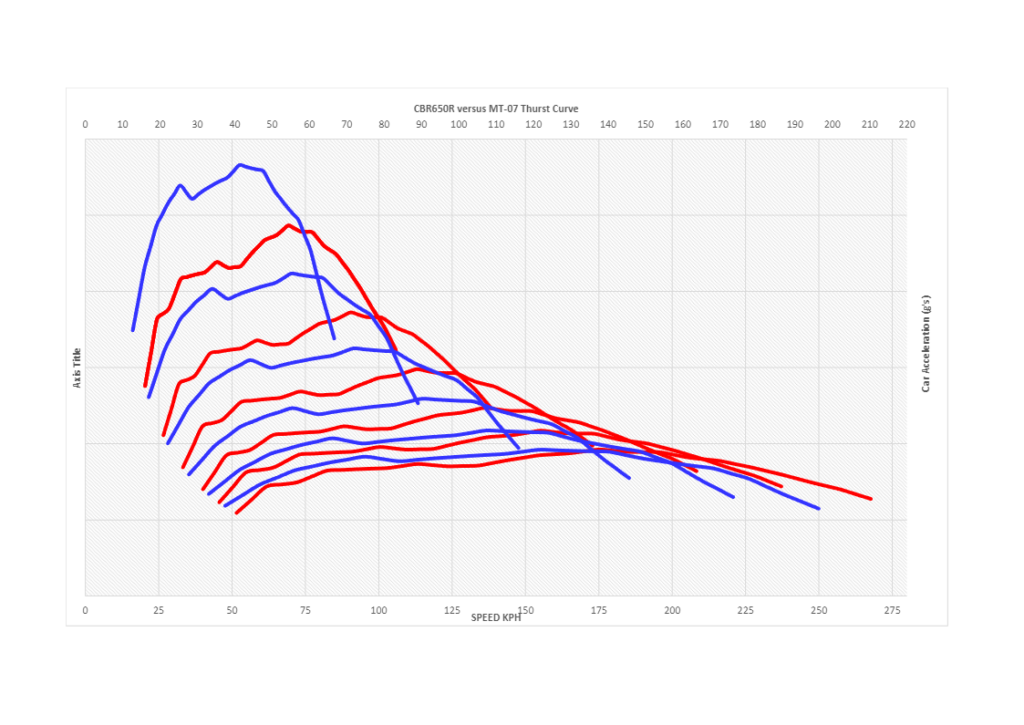 Thrust curves are really what we should be looking at as power/torque curves can only tell us what the engine performance is.

The engine performance while obviously especially important has to be translated through the gearbox and each of the motorcycle’s six gears.

This is when things can look a little different as we are adding more variables to the equation.

As gears are a multiplier of torque, gearing a motorcycle correctly will make the best use of the torque that the engine delivers.

The gearing will then translate the torque of the motorcycle engine most effectively to the road which the rider will feel as acceleration.

In the above graph what you are looking at is the acceleration/thrust available for each motorcycle in each gear plotted against speed.

The second highest would be second gear and so on. The lowest line is 6th.

The lower the gear the more acceleration/thrust available to the motorcycle.

If you look at the shape of each thrust curve in each gear they are all the same for each gear of the particular bike you may be looking at.

If you compare the torque curve to the thrust curve of any gear, you’ll see that they are the same shape, and have the same peaks and troughs.

That is because the thrust curve is the torque curve but multiplied and translated through each gear.

The thrust/acceleration in each of the motorcycle’s six gears is plotted against speed. Each gear has a finite max speed limited by both the actual ratio and the max rpm ceiling or rev limiter of the motorcycle.

As an example, if two motorcycles with the same first gear, primary and final drive ratio but one had a rev limiter twice that of the other motorcycle. (6000 rpm vs 12000 rpm)

This thrust/acceleration curve takes into consideration the weight of the motorcycle and the rider, with the rider weight being the same for a fair comparison.

If all other things are equal, as the MT-07 is approximately 20 KG lighter than the CBR650R, this will mean that it will offer more thrust in each gear as a result even if the torque and gear ratios of both motorcycles were the same.

The thrust/acceleration curve does not take into consideration aerodynamics or wind resistance.

If you look at the MT-07 you will see that its maximum speed in first gear (at the rev limiter) is around 85 km/h.

The MT-07 and CBR650R have very similar first gear ratios. But the CBR650R can achieve a much higher top speed in first gear simply because it revs much higher.

This trend is repeated in all gears, where the MT-07 has a substantial advantage at almost any speed in any gear, though this advantage does taper off in the higher gears and in particular 5th and sixth.

The MT-07 still has a slight advantage and offers more acceleration.

Impressively the MT-07 almost has as much thrust/acceleration available to it in second gear as the CBR650R has in first.

While the first three gears both are similarly geared as the above table suggests where it shows speeds in each gear at 5000 rpm. (The higher the speed the longer the gear.)

In 4th, 5th and sixth gears the CBR650R has much lower gearing, helping it claw back its torque and weight deficit.

If the CBR650R was the same weight as the MT-07 it would probably offer equal or more thrust/acceleration in 4th and 5th despite having less torque as its lower gearing would perhaps make up for this.

You may ask why are the last three gears for the MT-07 so much longer, and the CBR650Rs are so much shorter.

Well, the MT-07 could get away with lower gearing and not hurt top speed as it has no chance to redline in 6th.

While lower revving motorcycles tend to run longer gearing typically in the last three gears so that they do not lose top speed potential from their lack of ability to rev.

So, what does all of this mean?

Well as the power torque curve suggest, the MT-07 in most situations and in any gear and almost at any speed will be the more accelerative motorcycle. The thrust curve also confirms this fact.

It is only when the CBR650R can tap into the upper end of its rpm or the upper speed-end of any gear that it will offer more acceleration than the MT-07 and this is what makes the CBR650R’s outright acceleration greater, which you will see in the below graph.

But in most real-world situations the MT-07 will punch a good few bike lengths on that initial roll if both bikes are in the same gear and at the same speed, and it will do this from almost any speed in said gear but more so below 100 mph.

Above that, the advantage tends to swing back in favour of the CBR650R as higher road speeds tend to mean that you are at higher rpm.

If you are a CBR650R guy/gal in most situations if you want to keep the MT-07 in sight after that initial hit/roll, you’ll have to drop a gear and work the engine a little harder. Though if you rev out each gear the CBR650R will close the gap and pass the MT-07.

As a negative, the CBR650R would lose some top speed in each gear depending on how low you chose to go with the gearing and you’ll likely burn more fuel too.

Additionally, cutting some of that 20 kg weight disadvantage or simply being a lighter rider versus the MT-07 rider would also close the gap.

Of course, all the above options to improve the CBR650R’s available in-gear acceleration is available to the MT-07 rider too. 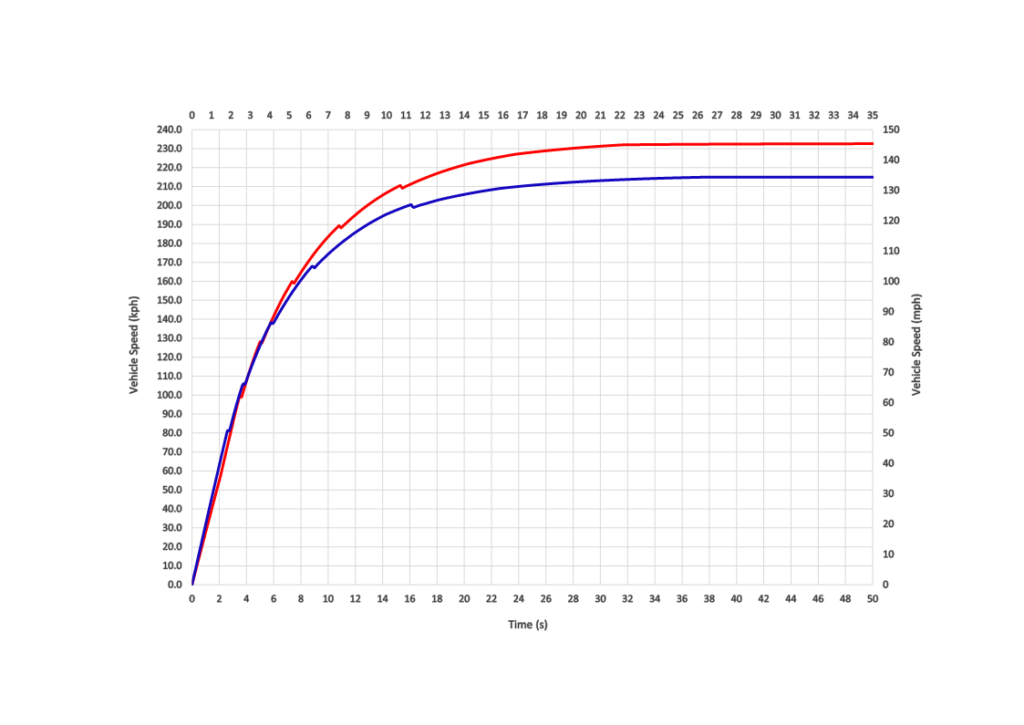 When it comes to outright acceleration these two motorcycles are pretty evenly matched below 100 mph. The difference will really come down to rider skill and which of the two motorcycles is easier to launch.

As the MT-07 makes so much more thrust in the lower gears – this does make it harder to launch effectively as the bike really likes to wheelie.

The CBR650R on the other hand is much easier and its thrust is less compressed in each gear’s speed range.

While it can and will wheelie, it is something that you have to encourage rather than it making the point on its own accord like the MT-07 does.

With the perfect launch and conditions, both can dip in the 11 seconds for the quarter-mile run.

Most average riders would be doing mid to high twelves on both motorcycles.

Much of this speed advantage for the CBR650R will be down to its extra power and better aerodynamics offered up by its full fairing and screen.

From traffic light to traffic light, and from corner to corner at speeds below 100 mph the MT-07 generally has the edge, as you can worry less about what gear you are in, work the motor less but get more.

Of course, if you use all of the CBR650R’s rev range, and at speeds above 100 mph it will be quicker, but you got to work the engine harder for equal or better performance, and that performance is mostly available at speeds that will land you in jail.

Either way, both bikes are fast and offer more real-world performance than most riders need, as well as being faster than most cars that you’ll ever come across.

Performance is awfully close with it coming down to whether you prefer the punchier MT-07 over the CBR650R that you have to work a little harder to have the edge.