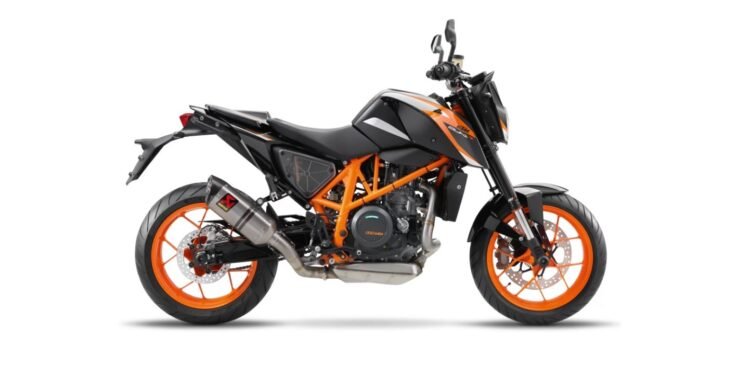 The  2016 KTM 690 Duke is an extremely potent Supermotard type motorcycle that is kind of in a class of its own.  Its closest competitors would probably be the MT-07 and the Ducati Hypermotard. 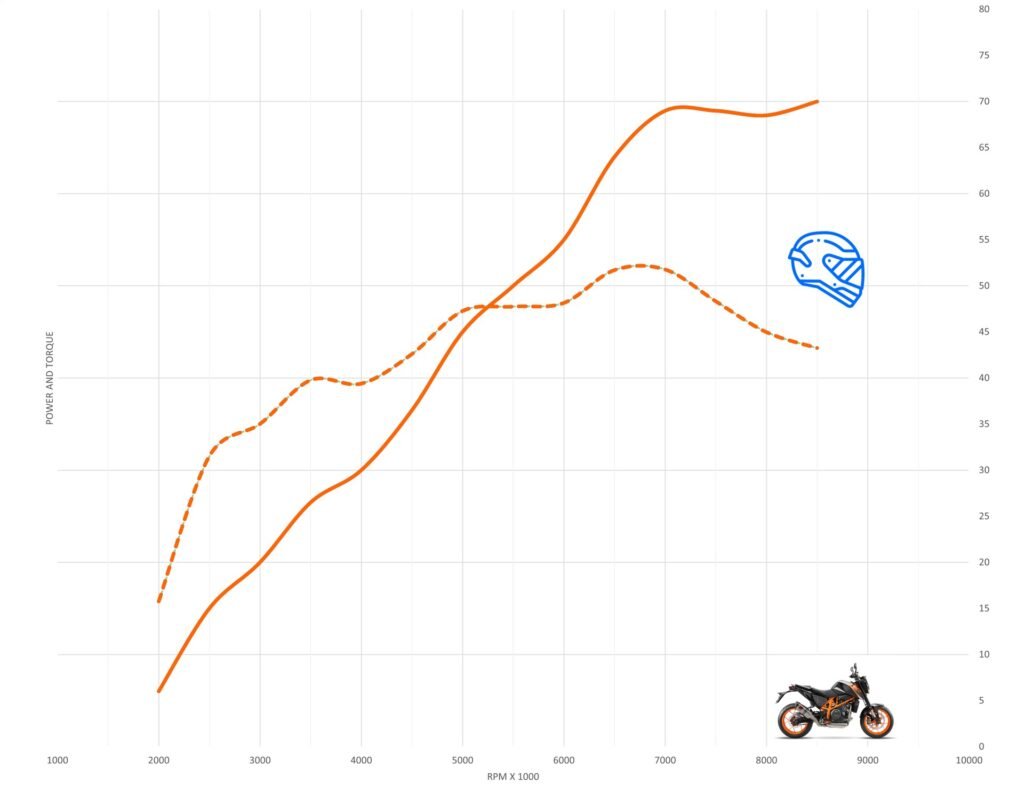 KTM really have brought some great engines to the market in recent times. The engine powering the 690 Duke is one such engine displacing 690 cc via one short stroke single but huge piston.

The 690 Duke engine is quite a short-stroke motor relative to other large singles and for such a large piston.

There is a good drive off the bottom, but this engine really likes to operate between 5000 rpm and 9000 rpm where it eats up rpm very quickly. 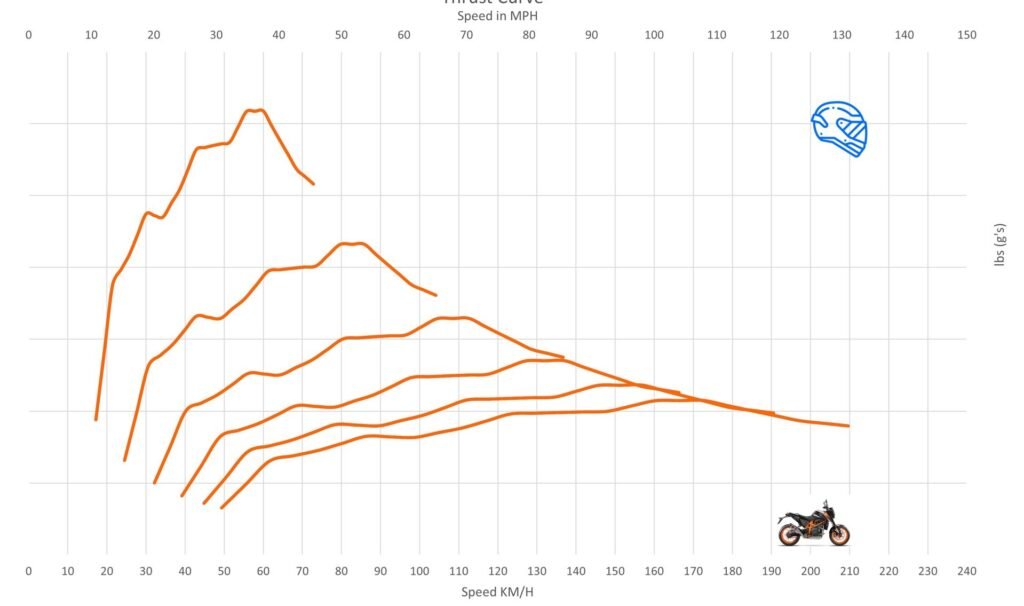 Its torque delivery does have a top-end bias but as the KTM 690 Duke is a very light motorcycle it still drives exceptionally well from as little as 3000 rpm, though like many singles does become a little ‘chuggy’ below that rpm.

The in-gear acceleration is very impressive and rivals that of an MT-07 in the mid and upper end in the speed range of each gear but loses out in the first quarter slightly.

Despite this, you still don’t need to worry about what gear you are in for a swift overtake if you don’t let the rpm drop below 3000 rpm in the last three gears. Otherwise, you’ll have to wait a moment before it spools up.

Overtaking in top gear at highway speeds is more than fast enough with the rpm sitting at around 4500 rpm which is right on the first step-up in torque, so the Duke 690 builds acceleration nicely.

Anywhere from 5000 rpm upward though is really the best place for the tacho needle to be, with the drive on offer being quite impressive. 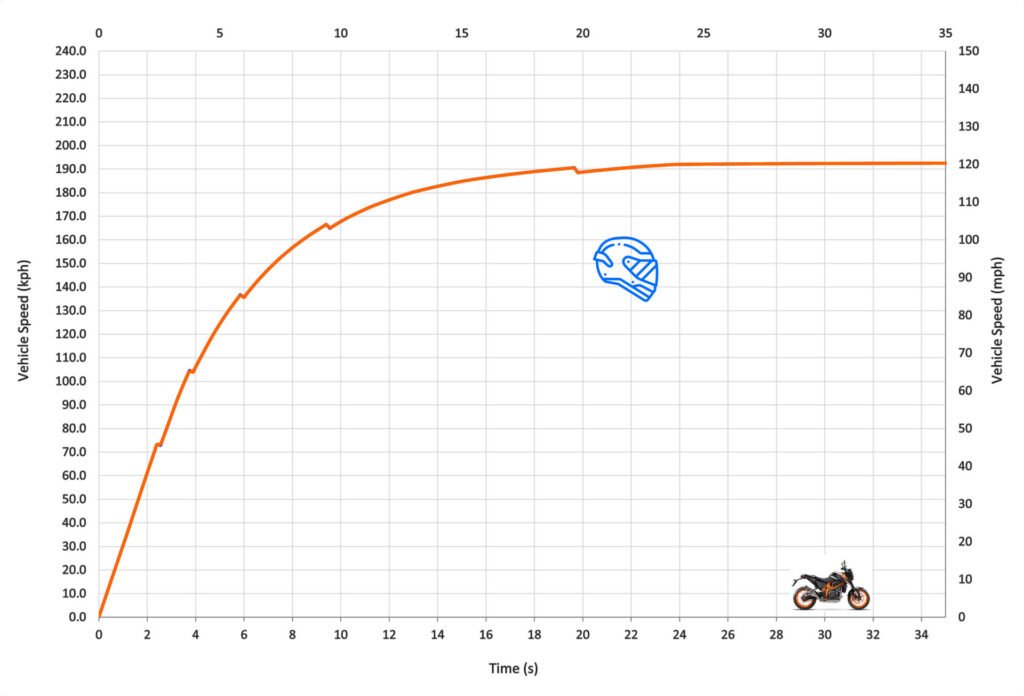 Acceleration is the Duke 690’s thing. It really does fly for a single-cylinder motorcycle. The hardest part is keeping the front wheel down as it will willingly lift the front wheel with only a small handful of throttle.

This is in large part due to the punchy 70 horsepower engine, low gearing and especially the light weight of the 690 Duke.

With all motorcycles, the 60 ft time is imperative with drag races being won or lost but especially so on lower power motorcycles as they do not have the power to make up time. It’s quite easy to launch gentle when you think you are launching hard add 1 to 1.5 seconds to your 0-60 mph time and end up with times between 4 and 5 seconds.

If you perch all of your weight over the front and dump the clutch aggressively and ensure that the front wheel hovers a few centimetres from the ground – from the off until you change up to second, the Duke 690 can put out great 0-60 mph times, but it is challenging as it just wants to flip.

Most big singles are quick off the line and then kind of hit a wall and lose some of their zest accelerating from 60 mph onward. The 690 Duke on the other hand is eating up gears in a flurry of noise and revs.

Amazingly the 690 Duke cracks the sprint from 0-100 mph in only 8.60 seconds. If the 690 was not such a brick aerodynamically it could go quicker.

From 100 mph it is not over as the KTM 690 Duke is still charging hard in fourth gear as it crosses the quarter-mile sprint in 11.97 seconds with a terminal speed of 109 mph.

Dipping into the 11s on the strip is a remarkable accomplishment for a single-cylinder motorcycle though the thumping KTM has a little more to go and ends up achieving a top speed of 120 mph.

For the best ETs as observed by the thrust curve, you should be changing up each gear right at the limiter.

The Duke 690 does make you work for it though with a tall seat of 835 mm that pitches you close to the handlebars in typical Motard fashion ensuring that an efficient tuck is not on the menu so it is hard to shield yourself out of the wind.

Despite the Motard aerodynamics and not ideal seating position for top speed, I reckon that the KTM 690 Duke has more in it, perhaps a 125+ mph top end.

You can achieve the 690s top speed in fifth gear, but it won’t rev out to 9000 rpm. And once you hook sixth the rpm’s don’t move much. Perhaps KTM retarded full throttle a touch from 8000 rpm in fifth gear and sixth gear which is nothing an ECU flash could not remedy.