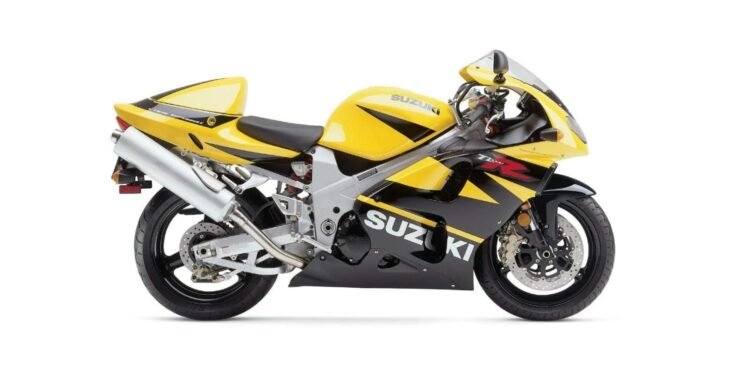 A look at the Suzuki TL1000R’s engine performance, top speed and acceleration 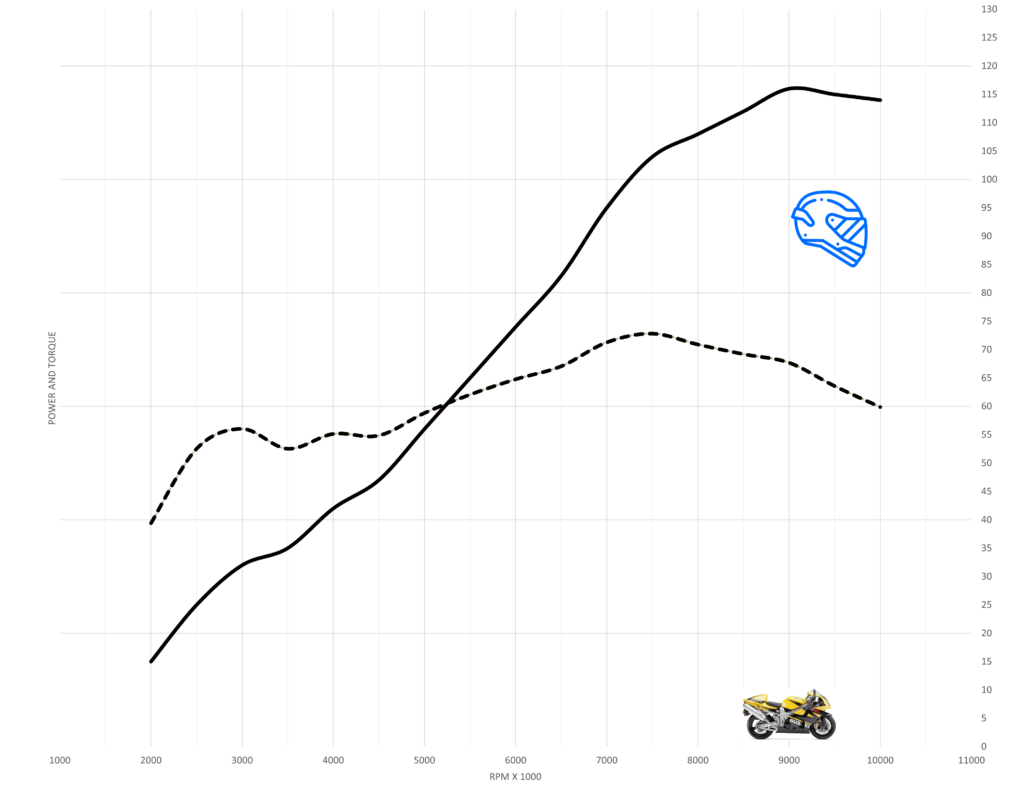 The Suzuki TL1000R is a race-derived version of Suzuki’s TL1000S and was released one year after the introduction of the street-orientated version in 1997.

Suzuki’s plan was for the TL1000R to be the new platform for Suzuki’s WSBK effort, but a factory-backed TL1000R never competed at the world level.

The R-version engine is powered by the same 996 cc L2 as the TL1000S but is a revised version. Suzuki opted for several power-boosting changes with a slightly redesigned airbox, dual-injector throttle bodies, more aggressive cams, forged pistons, and a revised ignition.

Claimed power was up over the TL1000S at a claimed 135 horsepower (including ram-air) and 78 ft/lb of torque.

Power throughout the range is smoother than the 97 S and less snatchy because of better fuelling.

The TLR pulls well from as low as 3000 rpm but like the S version as stock is a little lumpy. This clears up from 3500 rpm with an effective drive that comes alive from 5000 rpm and then really wakes up at 7000 rpm where it drives strong to 10,000 plus rpm.

The engine power delivery does feel a little flatter compared to the 97 TL1000S and does not have as hard a kick from 5500 rpm, instead feeling more linear and ultimately less exciting and perhaps subjectively slower.

The Suzuki TL1000R comes with slightly lower overall gearing than the TL1000S with Suzuki opting for an extra tooth at (39 vs 38) the rear wheel.

Having 10 extra claimed power and lower gearing we’d expect the TLR to be quicker and feel quicker over the TLS but it doesn’t.

The TL1000R does carry an extra 10 kg as stock, and as noted at the rear wheel produces a little less power at peak and through the entire range compared to its sibling.

The 98 plus TL1000S’s were much softer so the TL1000R would have the edge almost everywhere.

On the road, the TL1000R’s engine is very useable and easy to get the most out of.

There is more than enough power to blast you from one corner to the next with little fuss, but up against the S, it is a little more thrashy with the R’s engine requiring it to be kept above 7000 rpm for best effect or to keep your friends in sight on similar machinery.

Against its competitors of the time, the TL1000R was one of the stronger engines on the road and had the edge over the 916, RSV1000 and traded blows with Honda SP1. 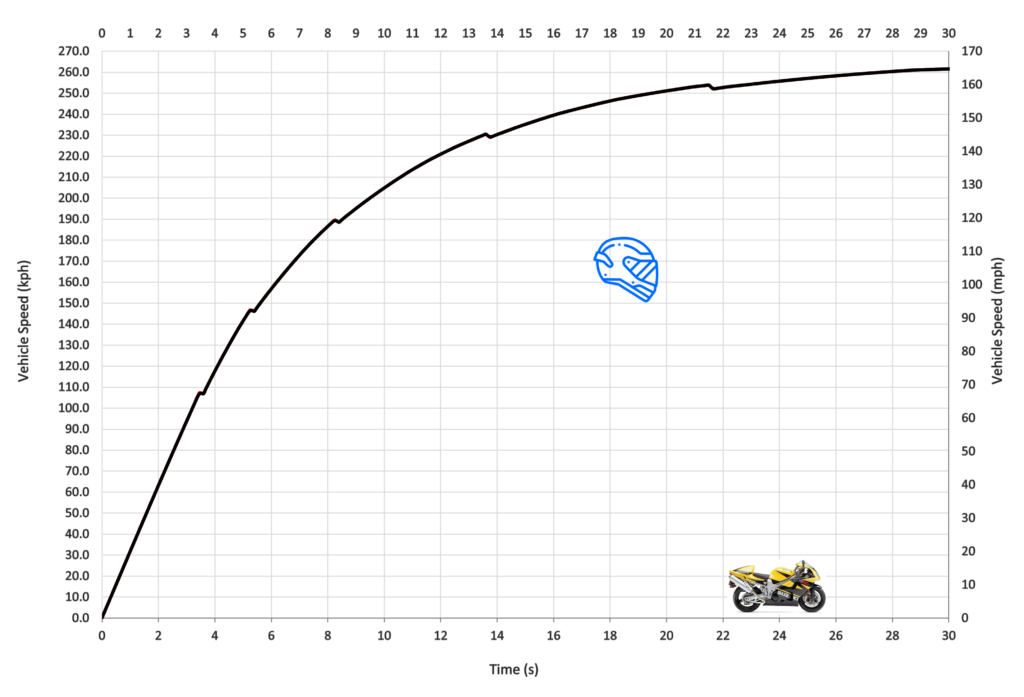 The TL1000R is very short with a wheelbase of only 1395 mm making the TLR shorter than many litrebikes past and present. Its shortness even rivals some 600s too. Equally the rake and trail is very aggressive as well.

Other than the TL1000R’s porky weight the chassis specs are aggressive and would suggest a flighty and wheelie-inducing machine.

When launching the TL1000R this is not the case. It’s quite uneventful with the TL1000R exhibiting great stability compared to many other sportsbikes and is a completely different animal to the playful TL1000S.

Just like the TL1000S the R’s clutch and gearbox are good but the TL1000R has a hydraulic clutch that provides less feel and is a little grabby, though once you get used to it it’s not a hindrance to launching the TLR well.

For the best chance of getting the TL off the line an aggressive clutch slip/dump at around 7000 rpm does the trick.

Wheelies aren’t an issue like on many litrebikes as the TL1000R’s heft keeps them well in check ensuring that the L2 power is put to the ground,

Taking the rpm to the latter is tempting just for that L-Twin noise though any further on the slightly optimistic tacho and you’ll hurt your times.

The sprint from 0-100 mph is quick too at only 6.17 seconds and is achieved a little way into third gear.

For comparison many litre motorcycles today can nudge 100 mph in only first gear which is wild, but they are not that much faster than the TL1000R.

The TL1000R is a low eleven-second motorcycle at the strip for most competent riders.

As she’s an older motorcycle it does not come equipped with a quick shifter so you must dispatch gears without using the clutch just like on many older motorcycles to really get the very best out of them.

The TL1000R hooks gears impressively fast if you do not use the clutch as the gearbox is fantastic.

If you nail your launch and change up consistently and quickly, and at the most optimum rpm points a quarter mile time 10.65 @ 132 mph is within reach which is a great time for a 20-year-plus old motorcycle.

Against the TL1000S they are very similar outright which is no surprise but due to the TL1000R superior aerodynamics from 140 mph it will very slowly start to gap its sibling.

But it’s not really enough to make a huge difference and would only equal a few bike lengths at back of a typically long straight at the track.

The TL1000R is a large motorcycle with a relatively low seat and plenty of room and a very effective fairing to keep the elements at bay. You sit in it and not on it though the screen could be a little higher to make it almost perfect.

The R was one of the more aerodynamically capable motorcycles of the time with a swoopy faring that looked like a mashup between the SRAD Suzuki GSX-R750 and Suzuki Hayabusa of the time.

Even with only 116 horsepower at the wheels, due to the TL1000R’s protective faring and swoopy lines, it is quite capable up top and will show more than 180 mph on the speedometer with very little effort.

There is probably a little more to come in more ideal conditions and with a taller screen. Those with a full exhaust system, Power Commander and performance filter can expect a real 170 mph from the classic twin.