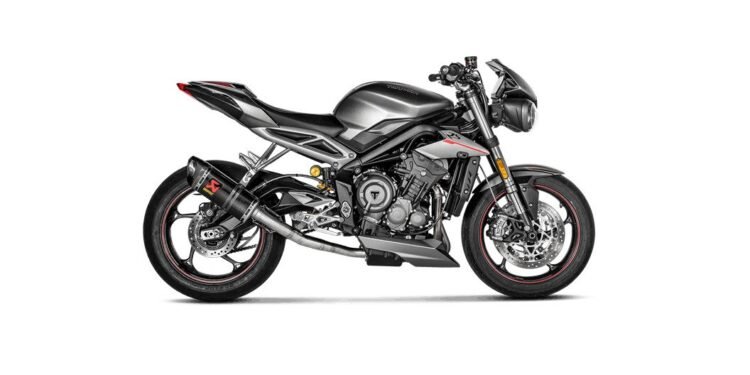 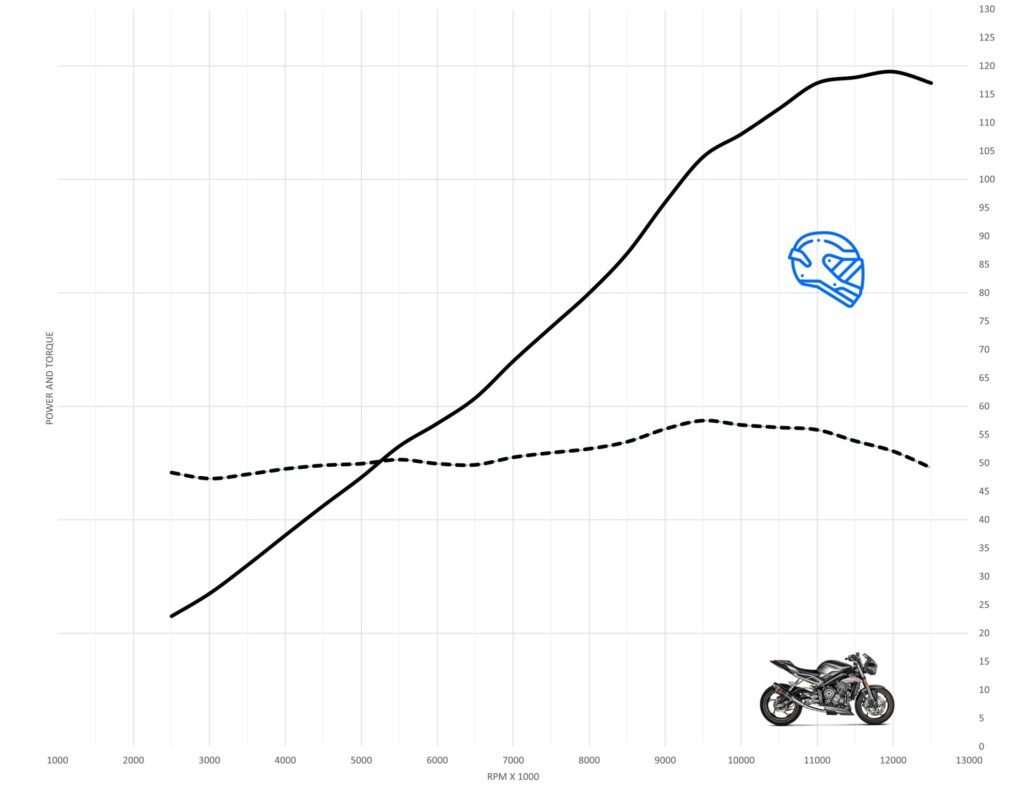 The Triumph Street Triple RS is the most powerful of the three variants that Triumph offer, producing a claimed 123 horsepower at 11,750 rpm and 57 ft/lb of torque at 9500 rpm from its 765 cc inline three-cylinder engine.

At the rear wheel, the Triumph puts out good numbers that are not too far off the crank figures with 119 horsepower and 56 ft/lb.

Just like its little sister the Street Triple 675 , Triumph has done an excellent job with this powerplant.

The peak figures are impressive but do not tell the whole story. as the Street Triple 765’s engine has an incredibly linear power delivery almost right from tick over where it produces only around 15% less than its peak torque figure.

The only blemish is the slight dip in torque between 5500 and 6500 rpm, but it would be a bit harsh pointing this out, as it is not felt on the road. 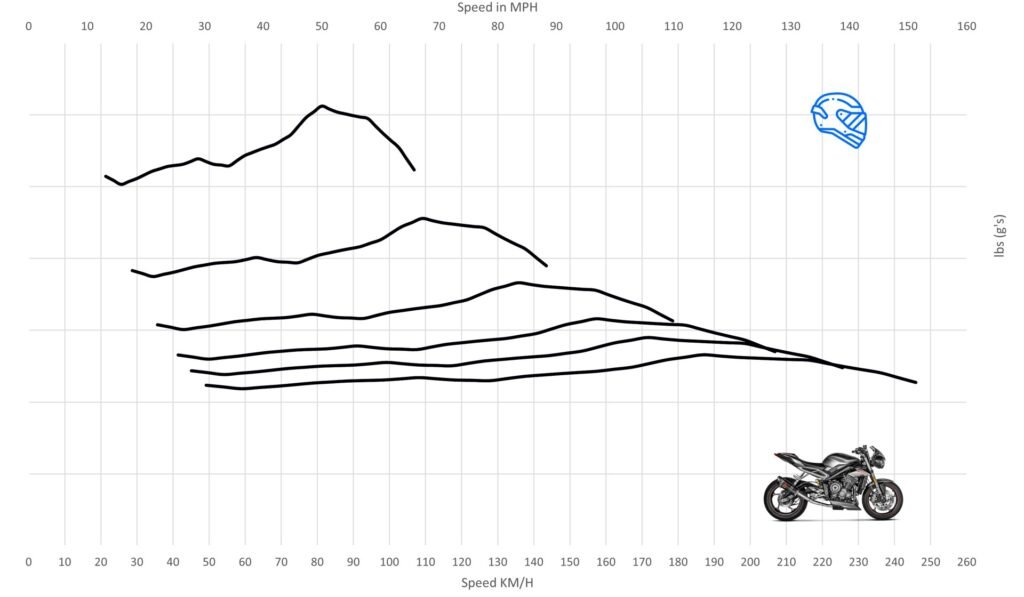 The engine and in-gear performance of the Triumph Street Triple make it feel like it is a larger engine, perhaps even an 800 or 900 cc.  T

riumph could have opted for lower gearing in the first three gears but chose to run slightly longer gearing than they needed to and are quite spaced out.

Despite this, the engine is so strong that even in the first three gears the 765 Street triple RS can trade blows with a Z900 and even MT-09.

The remaining three gears are shorter and closer together than what we would typically see in this class of motorcycle, but this does make for even quicker in-gear overtaking and less down-changing from cruising speeds.

This engine is up there with the best for sub 800 cc and will trade blows with naked motorcycles with larger engines. 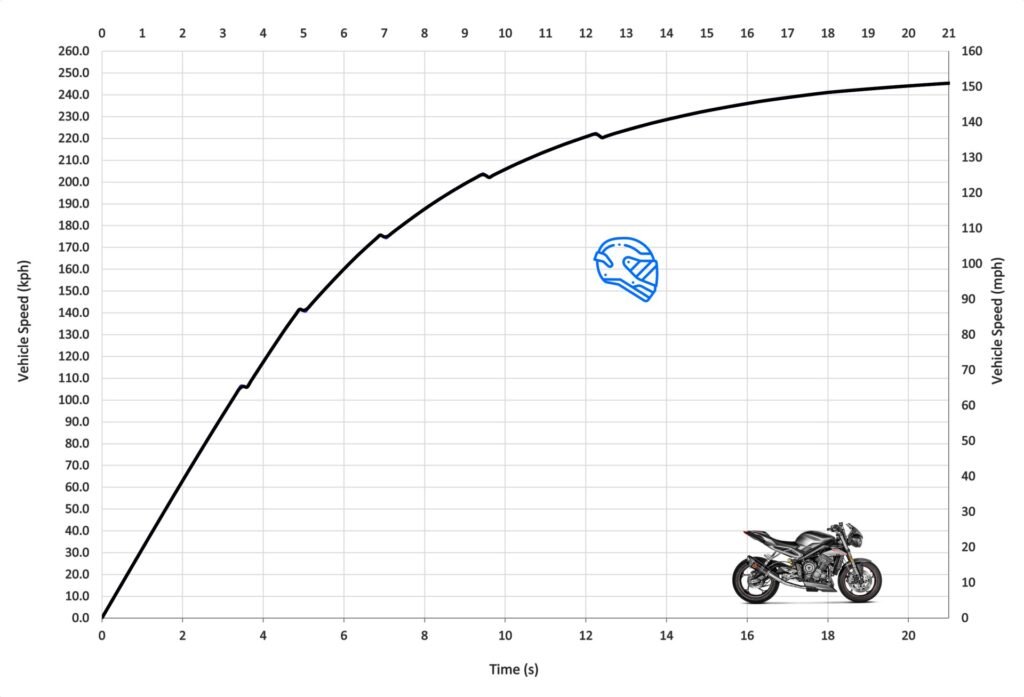 An exceptional engine should mean exceptional acceleration. The Triumph Street Triple RS does not disappoint and is one of the faster-accelerating motorcycles in its class.

Throttle response, clutch and gearbox are all good which makes for an easy motorcycle to launch.

There is more than enough power to encourage a wheelie when trying to get the 765 RS off the line, though that mostly happens if one is too aggressive with the clutch.

Due to the extremely wide spread of torque, the Street Triple 765 RS is not too fussy at which rpm you use to launch.

There are no huge ET differences if getting the clutch engaged at lower rpm and driving it in first gear, or if slipping the clutch at where peak torque is like one would do on most motorcycles for an optimum launch.

This is because the 765 Street Triple RS will not bog if driving it from low rpm. If you do, it’s also very easy to control wheelies due to the torque curve not having any major peaks and troughs.

Either way, the Triumph Street Triple RS will do 0-60 mph in only 3.10 seconds and 0-100 km/h in 3.38 seconds. These kinds of times are standard for any sporty motorcycle with more than 100 horsepower.

A sub-three-second time would be possible with more time.

The 0-100 mph sprint is despatched quickly too with the 765 Street Triple RS almost dipping into the 5s which is a benchmark normally occupied by litre plus motorcycles with a great time of 6.10 seconds.

For a naked motorcycle in this class, the Triumph 765 Street Triple RS shines above 100 mph which helps it score a great 0-200 km/h time of just 9.01 seconds putting it right up with some very faster Supercars.

The standing quarter mile is quickly followed for the 765 RS at 10.79 seconds and a 132 mph terminal speed.

A terminal speed of over 130 mph for a naked motorcycle with 120 horsepower is very impressive and shows the Triumph’s top-end pull.

Top speed is easily achieved with the Street Triple RS hitting the limiter in top gear without much effort. As mentioned before, Triumph opted for the last three gears to be lower and closer together.

Top gear is not touring gear and with it being quite low, and the 765 RS making its peak power very close to the limiter, and not tailing off makes for effortless top speed.

With the above in mind, the 765 RS managed a 150.4 mph top speed. With longer gearing I suspect it could be a little higher, perhaps 155 mph plus.