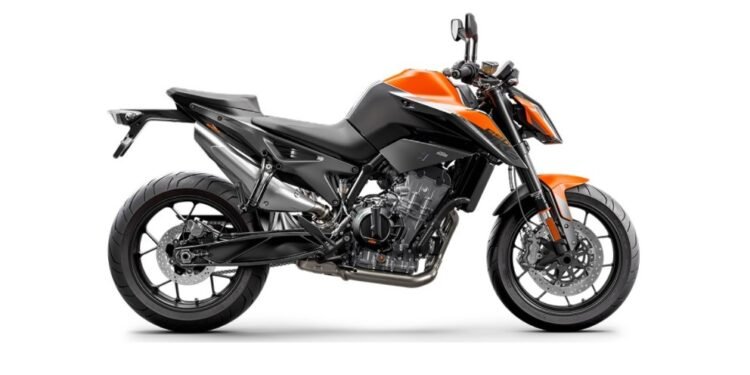 A look at the KTM 890 Duke’s engine performance, top speed and acceleration 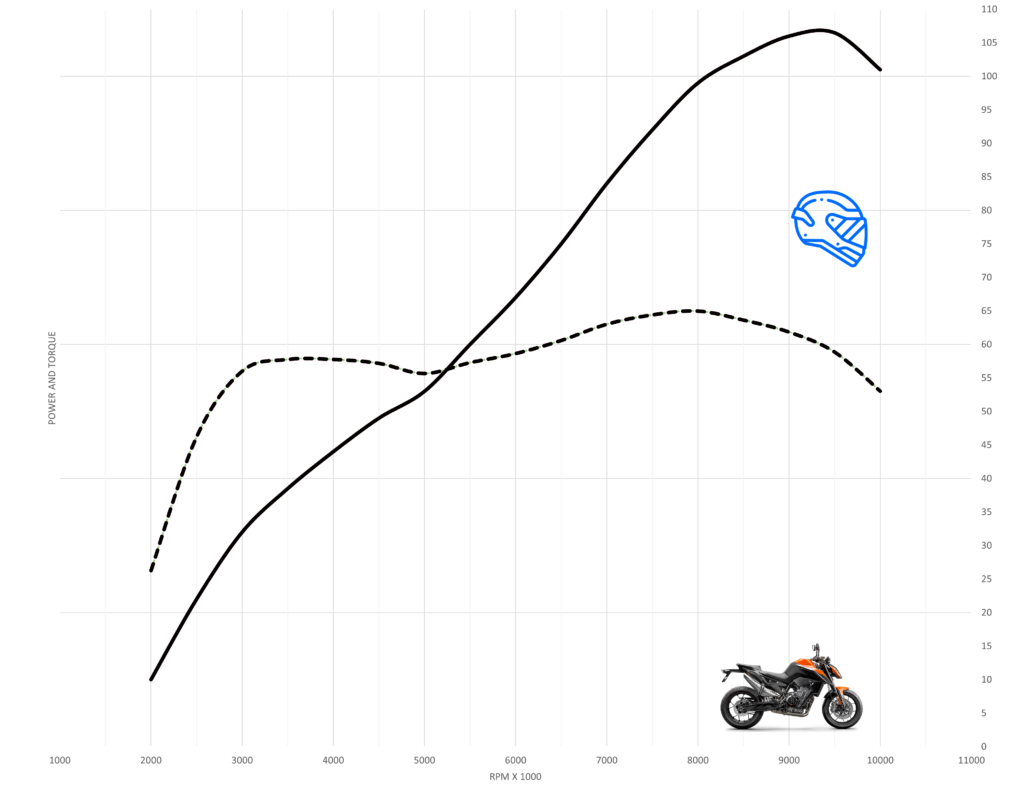 The superseded KTM 790 didn’t need any more power. Its 799 cc engine made around 95 horsepower at the wheels. It was light too and punched above its weight.

KTM has always been known in recent times to design and build brilliant engines with the 790 Duke being no exception.

Now KTM has given us the 890 Duke that nobody asked for. Just think of a 790 Duke with a bigger, more powerful and torque-laden engine, it’s that simple.

Both motorcycles make use of KTM’s LC8 parallel-twin engine. Internally though that extra 90 cc for the new 890 has come by the way of a slightly longer stroke and wider bore.

There are other internal changes as well as different compression ratios. The capacity increase as well as other changes mean that the 890 Duke produces a claimed 10 horsepower more at the crank from its 889 cc engine over its 790 Duke sibling.

Claimed power is 114 horsepower and 68 ft /lb which are impressive numbers for a sub 900 cc parallel twin.

The increase in power and torque over the 790 is not just at the peak, but instead right throughout the entire rpm range.

There is no point in the range where the old model makes similar power and torque.

The character of the engine is a little different than the 790 instead of the same, just ‘more’ as we might expect from the capacity increase.

Like the 790, the 890 Duke has a distinct power band though it comes in a little earlier at around 5000 rpm where the noise/emissions regs make themselves felt.

Unlike the 790, the 890’s powerband is not quite so pronounced and as a result, the engine is not nearly as thrashy as the 790, though just like the smaller sibling it does like to rev but is much more capable lower down in the range. 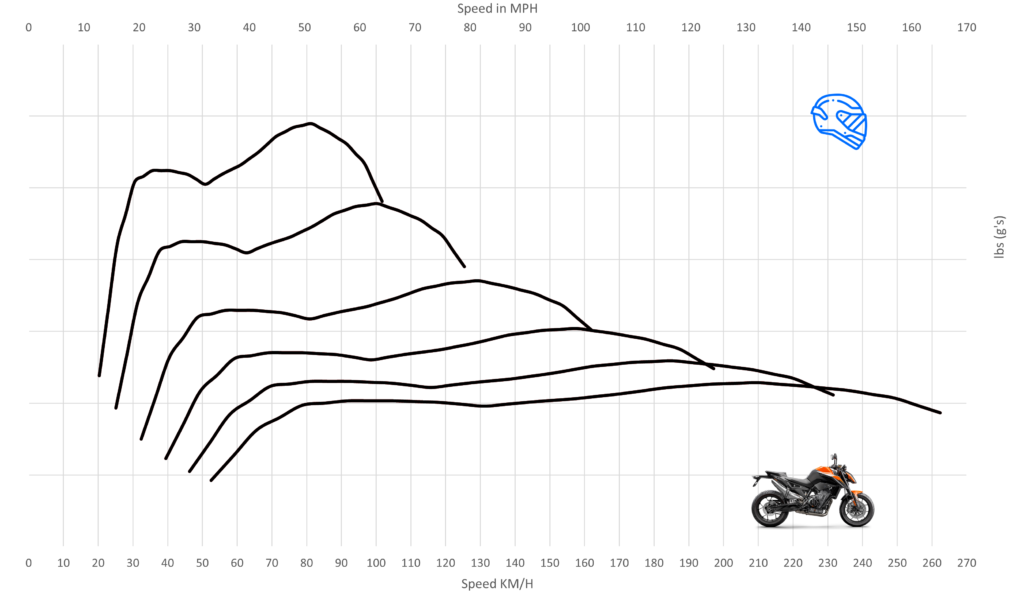 Part of the 890 Duke feeling less ‘thrashy’ is the extra tooth on the 17 front sprocket and the fact that it makes as much torque at 3000 rpm as the 790 does at peak.

The fatter spread of power and torque courtesy of the extra 900 cc ensures that the 890 Duke feels a little more like a baby 1290 than the 790 ever did, but of course, it’s not even close on performance compared to the monstrous 1290.

Still, though, the 890 Duke is explosive and works exceptionally well in almost all situations, whether blasting around town, down your favourite country road or on the track.

The engine has that perfect blend of in-gear punch with enough up top to have you playing with the bigger boys when required.

Personally, I think KTM should have the left gearing the same as the 790, as some of the big gains on the dyno over the 790 are not as noticeable on the road as you’d assume. Though in some markets the 890 may come with a 16-tooth front sprocket.

The 890 Duke is subjectively and measurably stronger in the boom and top but the upper midrange punch between the two is quite close with the 890 needing less rpm due to making more power and torque as well as because of the longer gearing.

I think most owners might want to gear it down as even at highway speeds the Duke 890 shows around 4000 rpm in top gear. It will overtake easy enough but fifth is more favourable. 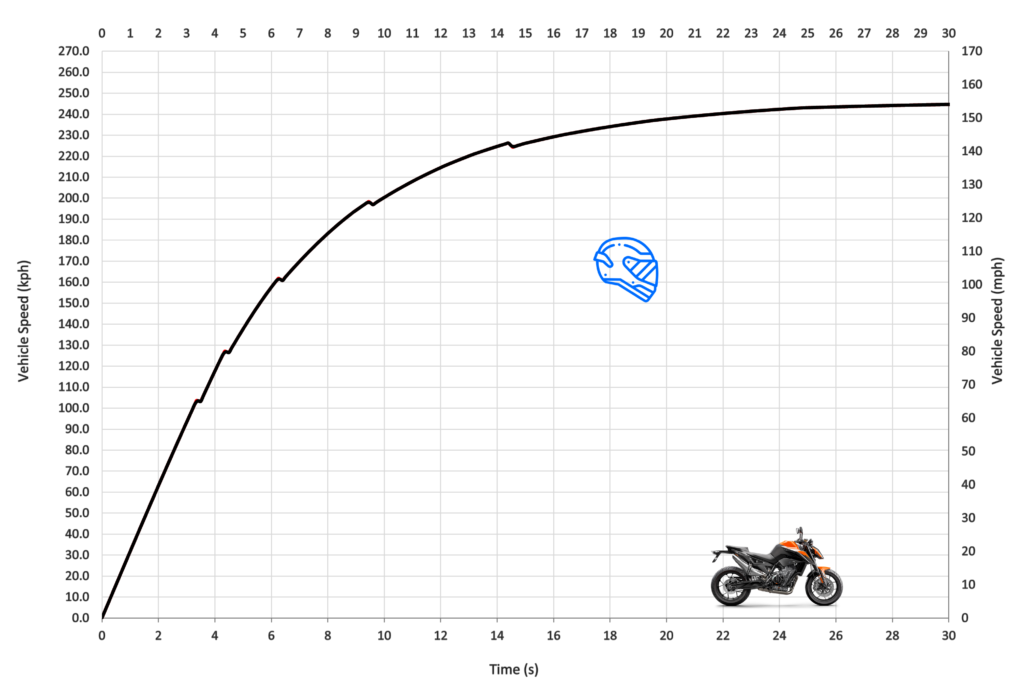 In terms of outright acceleration from KTM’s, we’ve learnt to expect impressive numbers that are better than what we would expect from the on-paper specs would suggest.

The KTM 890 Duke does not let the side down and shows us how capable it is.

The base 890 Duke does not have a special electronics package like the R version, but it does not matter as they are better turned off regardless of how good they might be.

The longer gearing and slightly less abrupt power delivery of the 890 make it a little easier to launch than I expected.

It will certainly wheelie very easily though thanks to a nice clutch feel and good fuelling you can quite easily have the 890’s front wheel hovering nicely a few cm off the tarmac on fast launches.

For that perfect launch, you’ll really have to put as much weight over the bars, as anything less and it’ll wheelie a little too much, despite the great fuelling and clutch.

First gear is pretty intense and is eaten up very quickly and is very easy to unintentionally bounce it off the limiter if you’re not quick with your left foot!

Once settled in second gear you can relax a little, though the 890 is still very light at the front as it charges hard. If you’re on bumpy roads, you’ll get a little bit of bar waggle as the light front kicks off the bumps.

That’s faster than pretty much all Supersport 600s and is knocking on the door of some 1000 cc litrebikes.

Middleweight naked-class motorcycles are all quick in their own right to 100 mph. It’s after the ton when the more powerful of them assert their advantage.

The KTM 890 Duke across the quarter mile is achieved in a flat 11 seconds with a terminal speed of 129 mph.

The speed across the line is very impressive for a naked motorcycle but does require you to be chin on the tank from second gear up to counter the poor aerodynamics. Sub 11s are definitely possible on a stock bike, just need to have more talent.

With a long enough stretch and neutral conditions, the KTM 890 Duke will crack 153 mph top speed. If from a standing start, you’ll need to hold on for about a mile and almost be laying on the bike to try and extract every bit of speed.

Typically, though for most riders with reasonable commitment you can expect 145-150 mph in good conditions which is around 160 mph on the slightly optimistic speedo.

A headwind will really hurt any top-speed attempt so pick your moment wisely for the best effect.