The KTM 390 Duke is one of a myriad of entry-level motorcycles that have emerged in the last 10 years or so which makes choosing (if it is ) your first motorcycle all the more challenging.

The KTM 390 Duke was introduced in 2013 and is powered by a punchy little fuel-injected 373 cc single cylinder engine.

It is light too, weighing in at only 138 kg dry making the KTM 390 Duke one of the lighter motorcycles in the entry-level class and lighter than even some less powerful 250s on offer.

I cannot help but think that KTM took some inspiration from what made the Ducati Monster series so successful which is a motorcycle series that has been with us now in a huge number of models ranging from 400 to 1200 cc and since 1993. A recipe that has certainly stood the test of time.

That successful recipe is simple really which is if you want to know.

Design an attractive motorcycle with a punchy engine wrapped in a trellis frame and price it competitively. Not to forget also ensuring that it stops and goes at least as good as its competitors.

While the Monster range has not and is not completely loyal any longer to this mantra at the very least in terms of pricing, at least for the M400, M600, and M900 as well as many of the entry-level Monsters that have since come this package/combination is present to this day in various forms across many models and brands.

KTM with their Duke 390 being one of them.

Other than the KTM insistence on everything orange in colour which might be off-putting to some, the little 390 Duke is an extremely attractive little motorcycle that has proven highly successful in terms of sales for KTM.

Unlike many entry-level motorcycles which more often than not are parts-bin specials that skimp on suspension and brakes to save costs and meet competitive price demands, the 390 Duke is a shrunken’ big motorcycle with a quality chassis and components that ensure that it stops and handles great as a result.

The 390 also has a racier sister called the RC 390 which is pretty much the same motorcycle wrapped in a sporty faring. 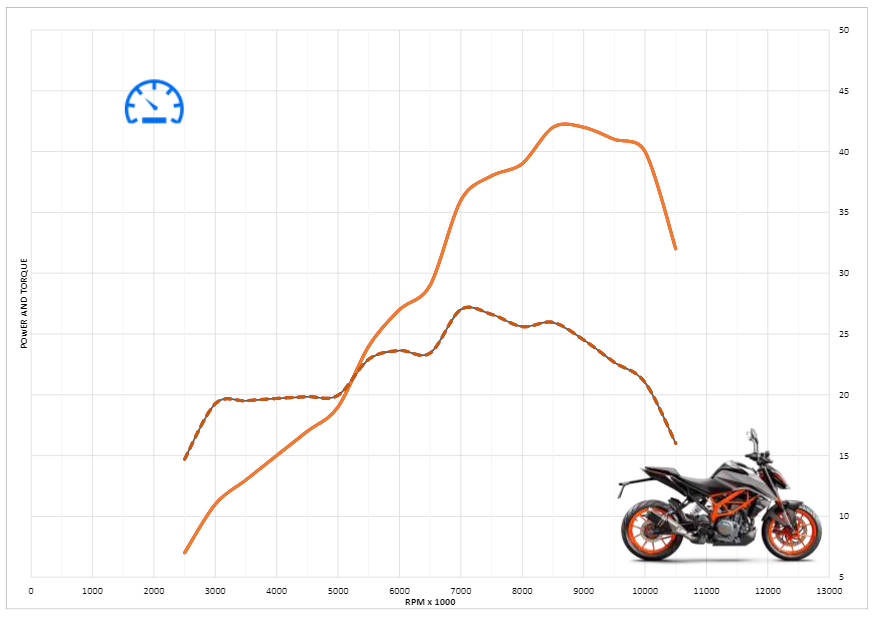 KTM’s foray into road-going motorcycles has been a recent one but the Austrian brand has many years selling and racing extremely competitive dirt motorcycles, which are pretty much all powered by small and lightweight high power and high torque single cylinder engines.

The 390 Duke’s compact liquid-cooled fuel injected 373 cc single cylinder engine is not some budget low-power engine cobbled together for a basic motorcycle to be sold to the masses, it’s an engine designed to offer great performance and thrills and it certainly delivers.

Producing an impressive 42 horsepower between 8500 and 9000 rpm and around 27 ft/lb at 7500 rpm is a great number for a small capacity single-cylinder engine.

Many small capacity engines feel rather flat, with any peaks or troughs in their delivery feeling anaemic at best but this engine is full of life and character and feels almost like a baby 1997 Suzuki TL1000S engine in how it delivers its power. 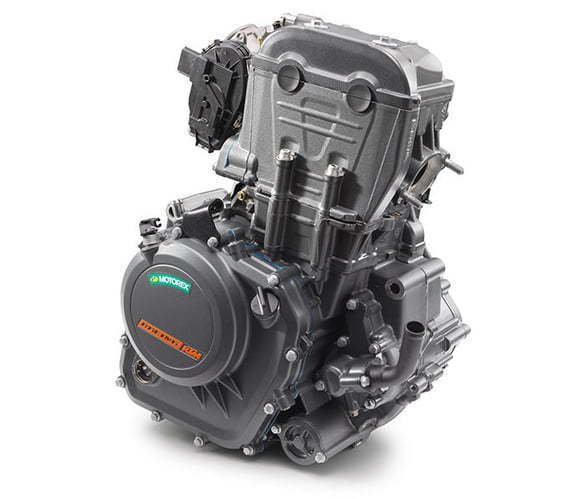 There is also enough poke to lift the wheel simply on the power in first gear, a feat not many sub 400 cc entry-level motorcycles can lay claim to.

This is obviously helped by a low first gear and a class-leading low weight of the 390 Duke. And of course, not to forget that powerful little engine.

Despite being physically small the KTM 390 Duke genuinely rides and feels like a larger motorcycle with more power than it actually had, which is a testament to KTM and their design teams’ ability to place such a potent little engine in such a lightweight chassis of 138 kg dry or 153 kg wet.

For a single cylinder engine, the 390 revs high peaking at around 10600 rpm give and take.  The engine has three characters. 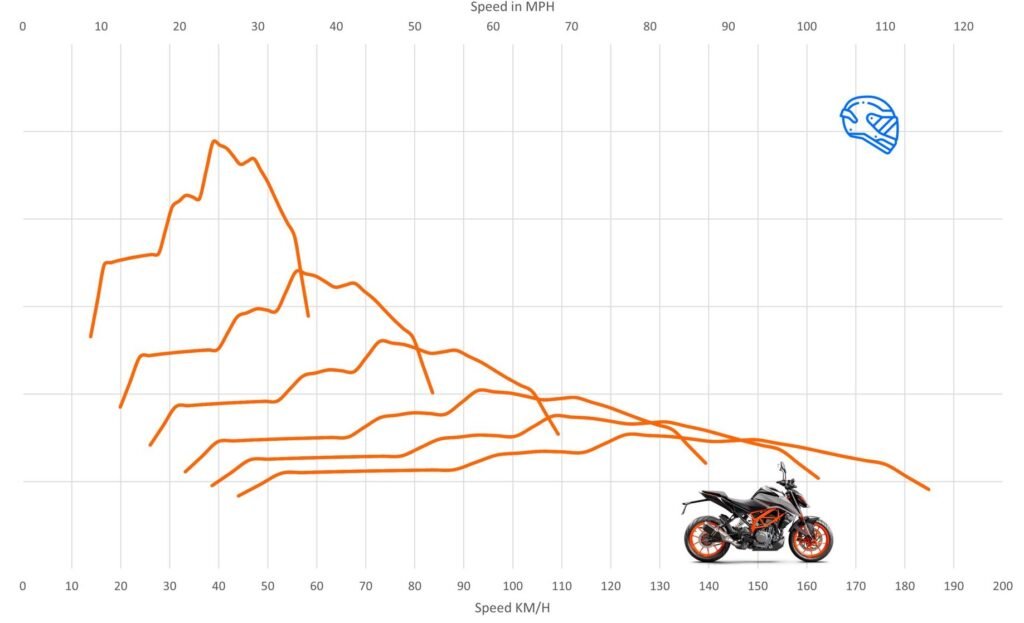 Before 5000 rpm while a little vibey and coarse it provides a nice flat torque curve that thanks to low gearing (of the first three gears) and lightweight offers good acceleration and drive at slow speeds and around town.

Then from 5 to 6000 rpm you get a nice surge in power/torque that will lift the wheel in first gear.

If you rev beyond that point and through 6500 rpm you are welcomed with another nice little kick in acceleration which is exciting and rewarding all things considered.

It does not rev quite as high as some of its main rivals like the MT-03,  Z400, and Ninja 400 but is actually a little punchier in the first 3 gears compared to them both. 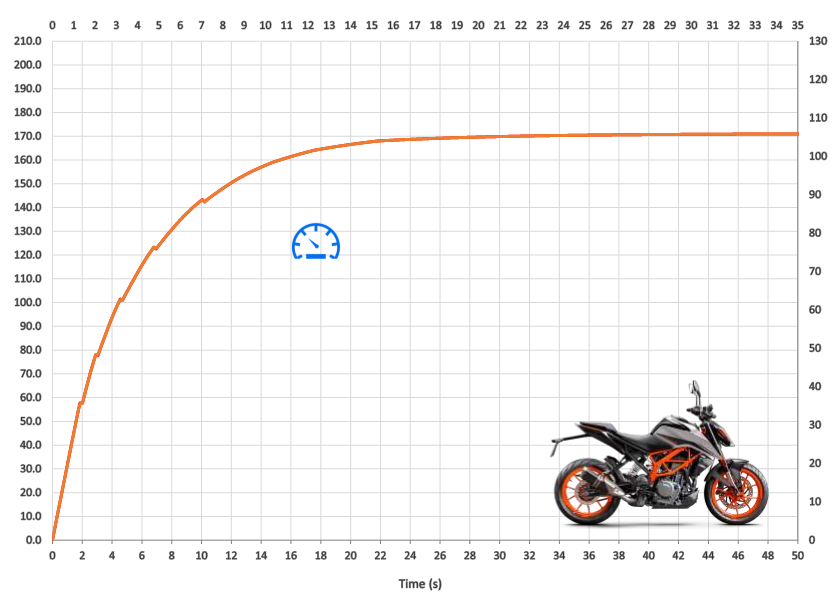 The 390 Duke is a quick little motorcycle. Not only does it go well in a straight line but it is also very responsive in-gear too considering its small engine capacity and does not require high revs or the exact gear to get a decent move-on as many rivals do.

It’s not often that you hear people say that a sub 400 cc road bike’s 0-60 mph time was hindered a little by wheelies but if you are really committed and chasing the very best 0-60 mph times this little bike will lift in first.

Unlike the Ninja 400 the 390 Duke required third gear and an extra gear change to hit 60 mph so loses some important time as a result.

Typically, though if slipping the clutch more to effectively launch you’d be getting very high 4s or mid 5s for the 0-60 mph sprint but better times are possible with an aggressive clutch dump but this is not a consistent way to launch and you are going to wheelie more often than not and ruin your ET.

If your aggressive clutch dump goes well for the very best 0-60 mph times you need to take first gear just before rpm limiter and then when in 2nd you have to change to 3rd gear between 9500 / 10,000 rpm otherwise, you’ll lose time. 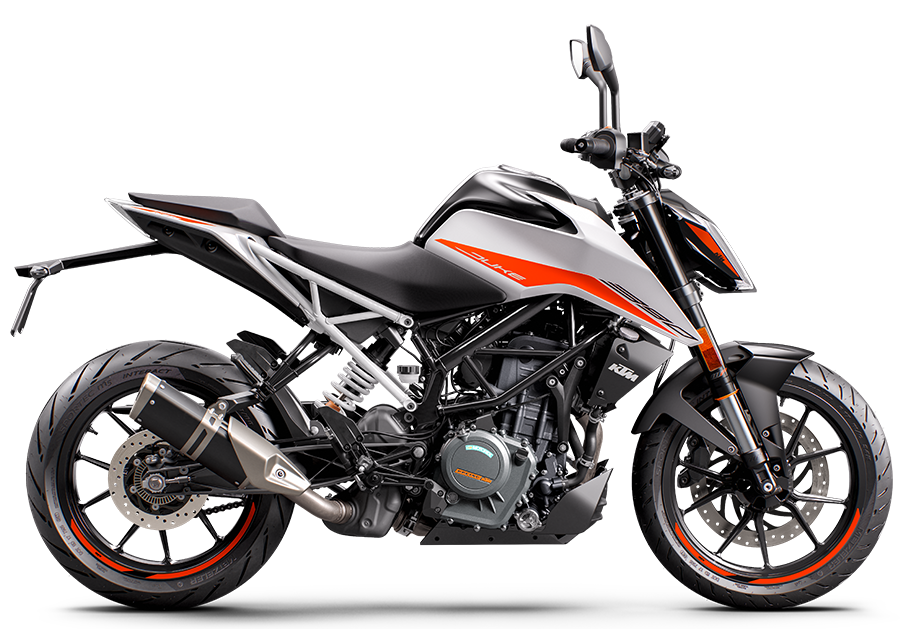 For the best-timed quarter mile, ETs same goes for changing from 3rd to 4th and 5th to 6th. Generally, you must do so around the 9500-10000 rpm mark as you’ll again lose time.

The KTM 390 Duke’s 0-100 mph time was pinned in a brisk 15.73 seconds which is quite a bit slower than the Ninja 400  but the Dukes’ time could certainly be a little faster if it had a swoopy fairing or the rider could effectively shield themselves from the wind.

Still, though I would guess that it would be slower due to its gearing and how it delivers its power in the upper end of each gear as the Ninja 400 holds onto its power much longer on the dyno and thus in each gear which results in better acceleration.

Getting all of the above done right and the little the KTM 390 Duke will blast through the quarter mile in 13.3 seconds with a terminal of 96.3 mph.  I will emphasize again, that if you rev out each gear too much, you’ll be in the mid 14s even if you launch very well.

The engine is a peach but for best-timed runs, it does require precise gear changes between a specific rpm rather than carelessly revving her out.

Being a naked motorcycle with only 42 horsepower at the wheels means that top speed will not be class-leading, especially against its fared rivals of similar power. We managed 106.3 mph but these have seen 110 mph plus. It very much depends on your size and weight and the conditions on the day.

Riding around on the road is good fun and the engine is great to thrash.

Like all smaller capacity motorcycles, their engines often shine much more on slower roads but the 390 Duke still has plenty of go for efficient highway overtakes but it really thrives in the city blasting around or if you are lucky enough to have very tight and twisty back-roads where you live the engine will be perfectly suited to this environment.

For all-around fun and performance, the Duke 390 is really up there and offers better acceleration than the Ninja 300 and YZF-R3 It may not be the outright fastest but point to point the engine is very effective for its size and is right up there with the best in class.