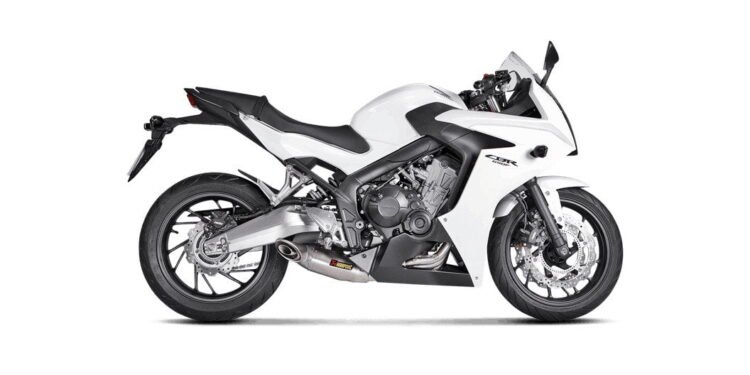 The CBR650F has been with us since 2014 and was supplanted by the CBR650R in 2019 and arguably was a spiritual successor to the very popular and capable CBR600F4i  albeit a less sporty and more learner and touring focused with lower pegs and higher bars for more comfort.

There was a softer and less popular CBR600F that ran from 2011 to 2013 but that model despite being a good motorcycle in its own right, but never quite caught on as the original F4i did.

Not to mention the F4i which is even more powerful and lighter. It certainly seems that Honda took another step back.

At least on paper, it was a step back from the model it directly replaces as well as the original CBR600f4i. A bike that offered Supersport performance with the all-around city and touring ability.

The entry-level and learner markets have been hanging and perhaps Honda saw the CBR650F as fitting better in that niche.

Perhaps as a result of that direction choice, the CBR650F went even softer than the CBR600F but that fact did not dissuade buyers as the CBR650F has been an extremely popular motorcycle with new and existing riders.

Even if it has less power than those models it was expected to replace not only literally but, in the hearts, and minds of riders.

With the above in mind how fast does CBR650F accelerate from 0-60 or 0-100 and so on and how much power does it produce? 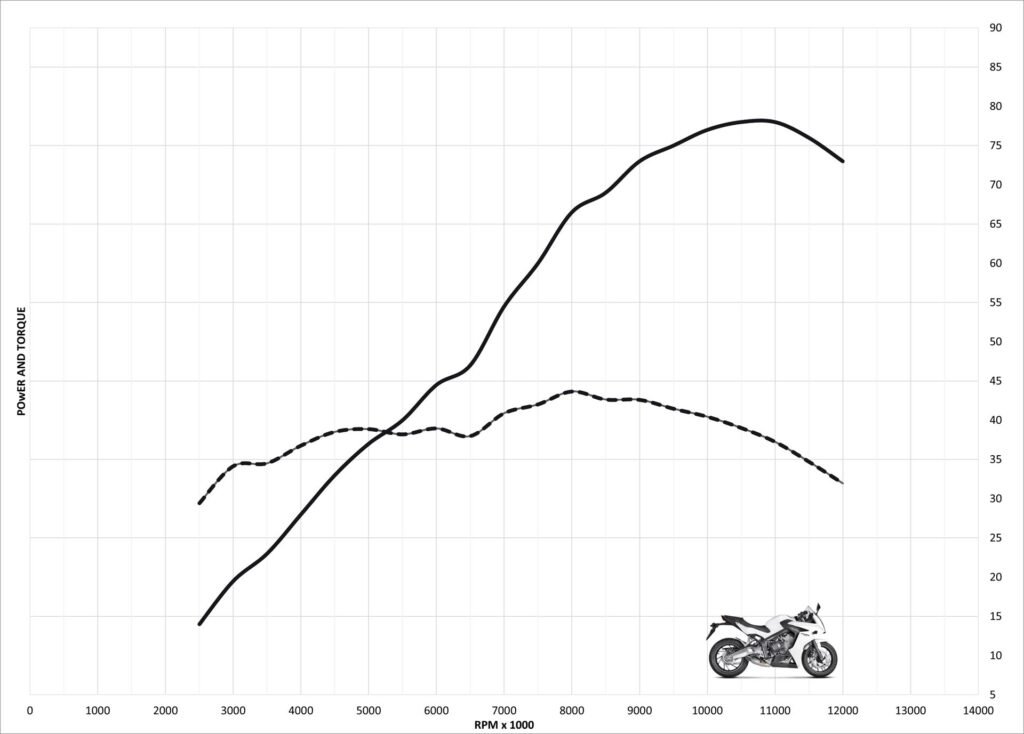 The CBR650R makes a respectable 78 hp at around 10500 rpm which is a little off of the model it replaces.

Do not let that put you off too much as the courtesy of its extra 49 cc it does make up for this with a better spread through the range than the CBR600F and quite a bit more than the CBR600F4i.

Peak torque is 44 ft/lb which is met at 8000 rpm at the point the engine comes on cam and gets a move on.

Below that the engine offers a flat curve of torque at around 37 ft/lb pretty much between 4000 and 6000 and is only 7ft/lb off-peak which is a point at which the rpm range the engine will mostly live on the street where it offers smooth, predictable and effortless overtaking grunt.

Low-end is certainly not class-leading for the 600-700 cc segment but there is more than enough poke to leave the CBR650F in a higher gear and use the torque to do your overtaking’ bidding. 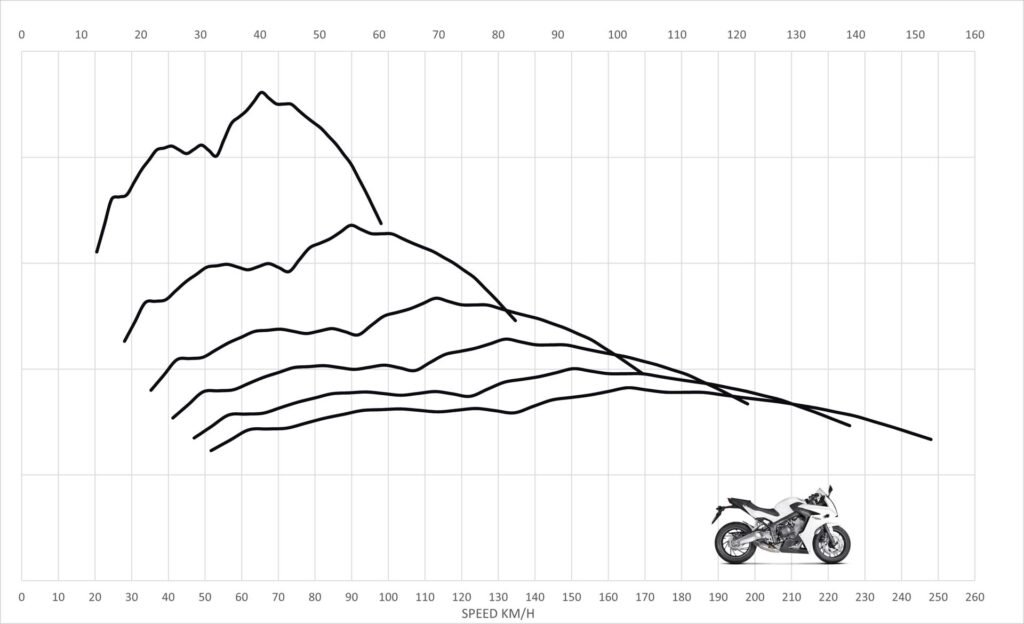 Like all 4-cylinder motorcycles the CBR650F still likes to be thrashed into the red and beyond, and while it does not rev to the astronomical highs of 15000 rpm plus as many motorcycles do in the Supersport class, the CBR650F still shows its Supersport lineage and will willingly enjoy being thrashed where it picks up nicely at around 6500 rpm all the way to around 12000 rpm.

It offers that familiar 4-cylinder scream that we all enjoy and know so well.

While it does not pull from 8000 rpm up like a Supersport or its sibling the CBR600RR, the CBR650F still has that turbine linear build of power that will certainly thrill you and put a smile on your face. An ECU flash and Decat exhaust will certainly give the CBR650F that race bike sound while also taking the power up to around 85 horsepower at the wheels. 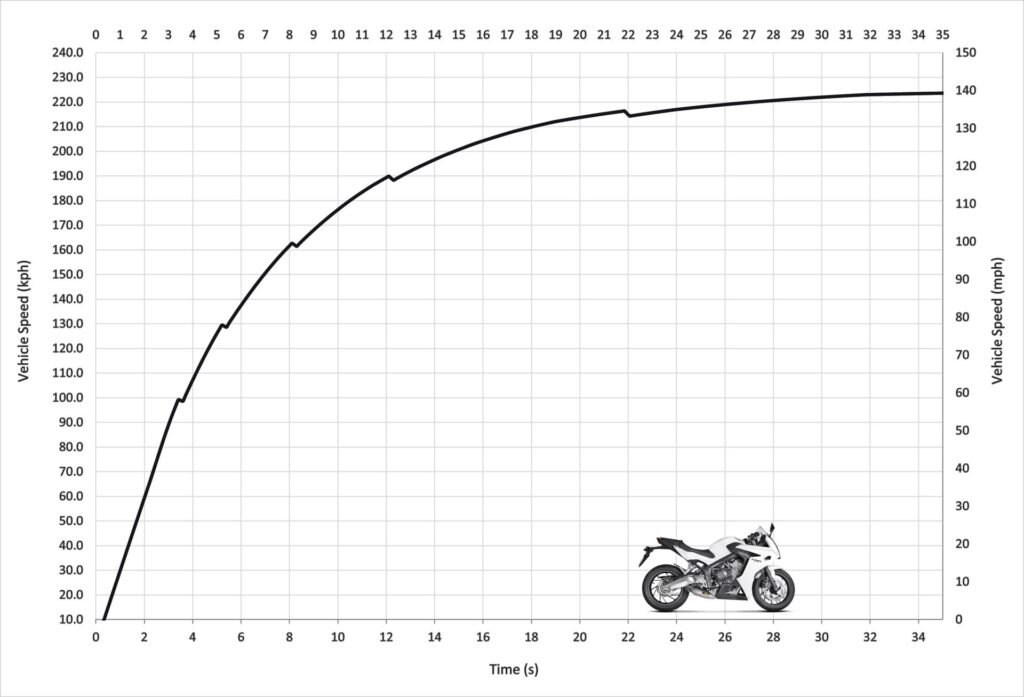 Just like all middle-weight motorcycles the CBR650F is objectively quick and will beat or equal many Supercars and Sports Cars from both the 60 mph and 100 mph sprint from zero.

The clutch is light and smooth and while the CBR650F will indeed wheelie its weight and ease of use makes launches easy and consistent.  The 0-60 mph time could be quicker but you have to literally hit the limiter in first which is around 59.7 mph so you need 2nd gear to hit 60 mph and lose a little time due to the gear change.

Funnily enough, if the CBR650F had gearing that was a tiny fraction longer the 0-60 mph would be potentially 0.20 seconds faster as you’d not require the time killing gear change. 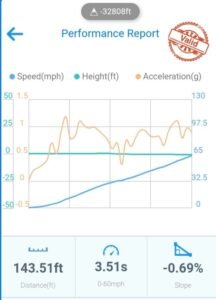 It’s not done there and continues to charge pretty hard and manages 0-100 mph in 7.90 seconds.  For the Quater Mile, the CBR650F manages a very decent 11.75 seconds @ 117 mph but not quite Supersport class as demonstrated by the Yamaha YZF-R6.

The CBR650F is generally not too fussy at what rpm you change gear for the best ETs so anywhere between 10500 and just before the limiter will yield consistent times.

0-130 mph is achieved in 17.16 seconds at which point the CBR650F starts to relent with its acceleration. If you want to accelerate beyond this point you better tuck and make yourself small as you slowly make progress to the CBR650F’s top speed.

For normal riding around the CBR650F has plenty of power available to accelerate at will.

For example, at highway speeds, there is no need to change down a gear as 6th is more-than-enough to blast past slow-moving cars. If you really got to go you could even use 2nd gear, but rpm would be pretty high, so third gear should be used if you really have somewhere to be on time and the CBR650F will respond willingly.

The CBR650F offers decent wind protection and although not class-leading it is better than your average Supersport bike.

But like all motorcycles, you must work on your Yoga positions so you can get all your body parts out of the worst of the wind in order to eke out the most mph possible.

This makes sense as the R version is a little more powerful, and while the CBR650R has a smaller frontal area it has a smaller less protective screen and front fairing which ensures that it is harder to get out of the wind. Both would benefit from a bigger/taller screen

In most day-to-day weekend blast situations, you’ll be hitting 120-30 mph if you are not committed to a full tuck and as per the acceleration, the CBR650F will get there pretty quickly.

The CBR650F from a performance perspective is very much like the CBR650R just with a little less power, and a little more weight and thus accelerates a little slower and loses out at the top by around 5 mph.

If you want a comfortable, fast, and fun bike that will tour and commute but still provides enough engine performance to play with your friends or upset sports cars, while putting a smile on your face the CBR650F is a great choice of motorcycle in a sea of great choices in the busy entry-level sportbike class.