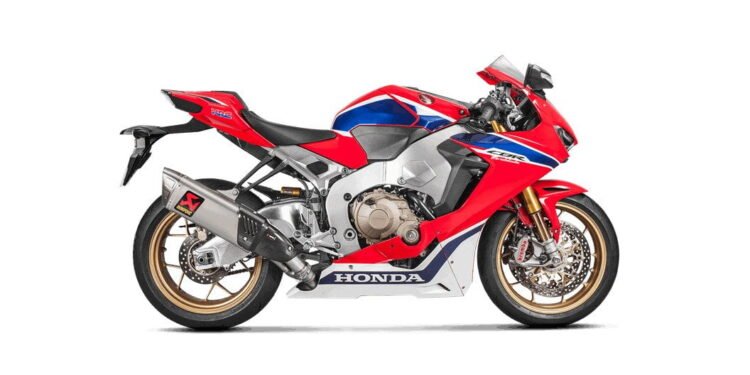 The Honda CBR1000RR started out as the legendary CBR900RR and has been with us now for what seems like an eternity!  28 years to be precise.

The CBR900RR from its origin through to when it became a fully-fledged 1000 has never been about peak power and as a result has never led the class in terms of power and top speed.

The first CBR900RR was eclipsed in a straight line by the ZX-9R which was Kawasaki’s flagship at the time when the road Superbike class was loosely defined and made up of 750s and 900s.

The CBR900RR/1000RR wears many outfits and has changed a fair bit over the span of 28 years with incremental capacity hikes and tweaks to the engine, and new chassis introduced to keep the CBR1000RR competitive against its peers.

In 2004 the CBR1000RR saw its first all-new engine instead of a bored-out version of the original.

This all-new engine made an impressive claimed 172 horsepower at the crank which was 20 horsepower up the CBR954RR it replaced.

The engine was not the only thing new and was accompanied by a whole new chassis and design.

That engine largely remained the same and was used until 2007 which is when again a new engine was designed from the ground up to be packaged in a new lighter and nimbler CBR1000RR that was reminiscent of the original Blade in ethos.

The 2008 model CBR1000RR was brilliant and lead the class briefly but by and large remained the same for 9 years despite a midlife refresh where new wheels, suspension/forks, bodywork, and dash were added.

Though the engine and its output remained the same and still a great motorcycle, in terms of power and technology the CBR1000RR kind of became long in the tooth as competitors leapt ahead with new motorcycles that had a suite of MotoGP-derived electronics and significantly more power than the CBR1000RR.

What transpired was that Honda was kind of left at the bottom of the class as competitors jockeyed for position.

After 9 years Honda finally reacted in 2017 and introduced a new Fireblade and everyone was overly excited.

For 2017 Honda had updated its flagship CBR1000RR with a fresh new and perhaps Panigale-inspired bodywork coupled with electronic features such as fly-by-wire and traction and wheelie control for the first time.

This technology worked in tandem with selectable rider modes much like its competitors.

A retuned and tweaked engine made a claimed 189 horsepower at the crank which is around 15 horsepower up on the previous 08-16 Model.

The CBR1000RR’s extra power came primarily from its higher 13:1 compression ratio as well as its higher rev ceiling.

The 2017 CBR1000RR is equipped with a titanium muffler helping it to lose 14 kg over the old model.

The above sounded great and it is but that initial excitement was a little short-lived once we learned more!

While the CBR1000RR looked completely new the engine and chassis were taken straight from the previous model meaning that the latest (at the time) 2017 CBR1000RR was based on an outdated platform.

To put it harshly this new CBR1000RR was kind of mutton dressed as Lamb or it simply had fancy nice new clothes and some bling jewellery but under the skin, it was pretty much the same bike.

Despite the above and still being bottom of the class in terms of power the CBR1000RR did feel pretty new and was compact with that 14 kg weight loss really making the CBR1000RR feel responsive despite being down on power versus competitors. 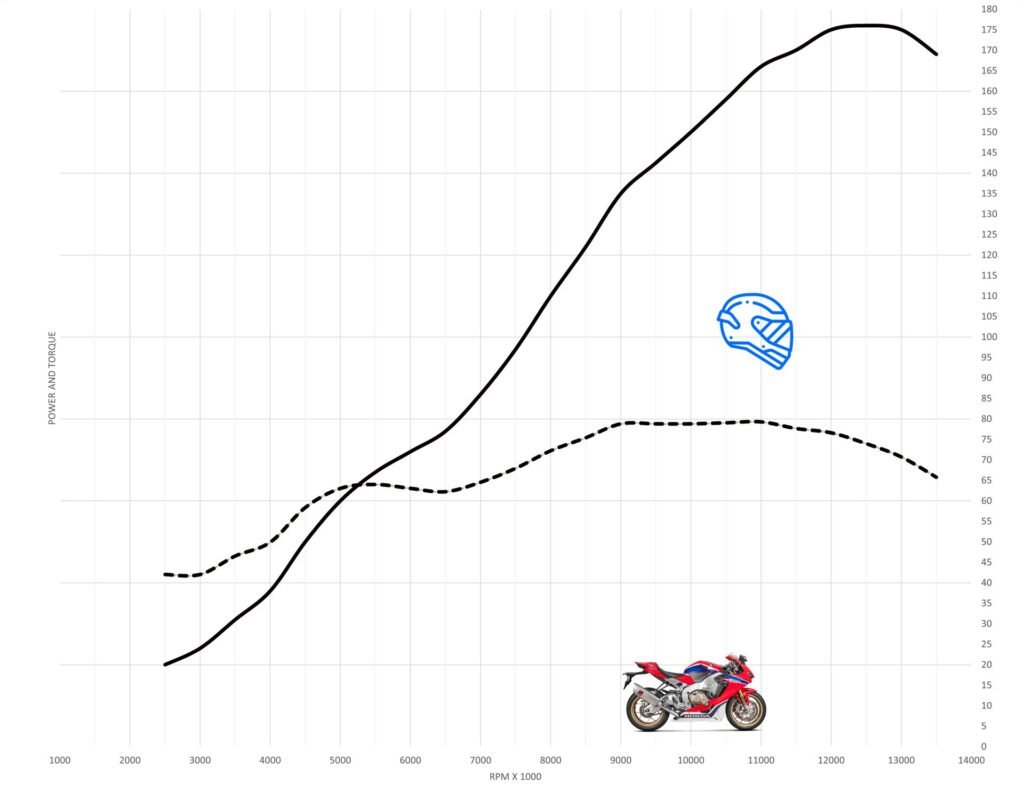 It is insane to imagine that in 2017 the CBR1000RR and making 175 horsepower at the wheels and yet still as if history is repeating itself the 2017 CBR1000RR was the least powerful of the 1000 cc Superbikes of the time.

What does this mean though and is it important?  The simple answer is no, as the power advantage that a competitor may have is really not usable on the road and in most real-world situations.

If you like roll-racing on desolate highways then maybe yes it shows but if you are a canyon carver, the short straights between corners will see very little in the way of an advantage for more powerful 1000 cc bikes over the CBR1000RR.

In isolation, the CBR1000RR has massive amounts of acceleration anywhere you like and, in any gear, and really explodes into life as it gets to 7000 rpm where it will howl all the way up to its 13800 rpm limiter as it delivers mind-bending acceleration. 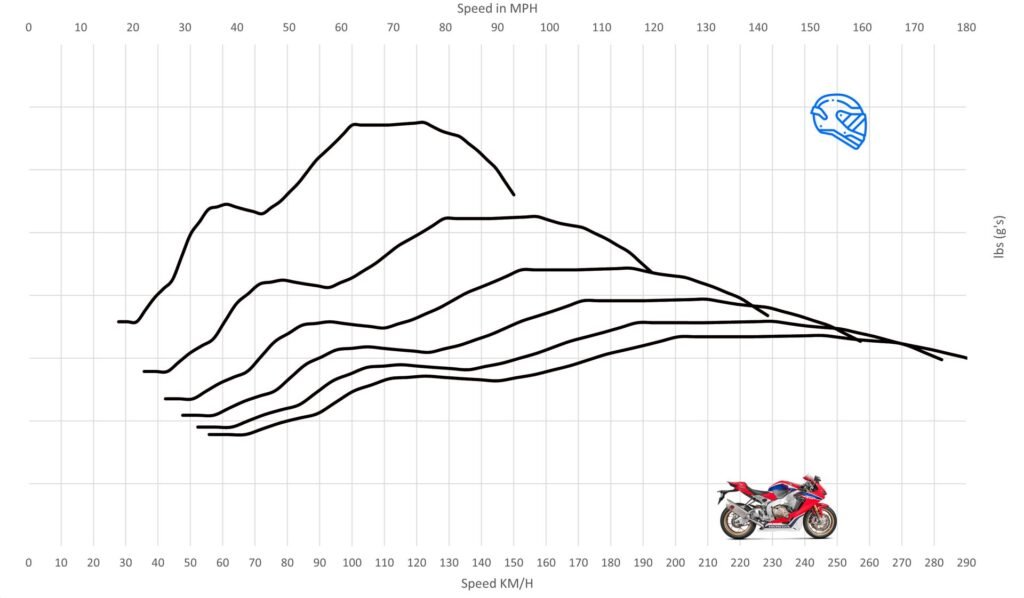 The only weakness would be below 5000 rpm which is a point where many rivals offer considerably more thrust.

Also, from 5000 to 7000 rpm the CBR1000RR is a little weaker compared to many 1000 cc Superbikes past and present. Though I will add that this deficit is only noticeable when riding back-to-back with its rivals.

The character of the Honda’s engine makes it feel faster than it is and this is because it lacks a little mid and low power compared to its rivals but then it comes on really hard as it picks up thrust from 7000 rpm in a kind of two-stroke fashion.

Typically, linear power deliveries with no sudden steps feel slower even if they make more power but the Honda feels very much as fast as its 175 horsepower at the wheels would suggest.

It is also an exciting engine delivery too and sounds pretty wicked for a stock exhaust when thrashing it.

That’s a silly question as any 1000 cc Superbike is not just fast but stupidly fast.  The CBR1000RR is not the fastest in class and is actually very likely slowest in terms of acceleration, though we still have to test some of the other current literbikes, but of those we have tested it’s at the back, and even being bettered by the S1000RR from 2010.

Like all Honda’s the CBR1000RR’s controls are nice and thankfully it has a cable clutch rather than a hydraulic one.

The clutch is light and relatively progressive and has a decent feel. Honda’s wheelie control is a little basic and intrusive and does make it a little hard to get the CBR1000RR off the line for that perfect 0-60 mph time which we managed in 3.09 seconds and 0-100 km/h in 3.21 seconds.

I could not quite dip below the 10s and managed a quarter mile time in 10.17 seconds with an impressive terminal speed of 151 mph.  0-150 mph arrives in 10 seconds flat which is not uprising if we look at the quarter-mile time.

The CBR1000RR accomplished 0-180 mph in 20.04 seconds which is quite a little bit slower than some competitors. This is due to the CBR1000RR being the least powerful of the latest 1000 cc Superbikes.

Also, while it has a wind-defeating svelte and small frontal area, it also has a small screen and is cramped for taller riders. So hard to get in an efficient tuck and out of the ferocious wind as you feel rip and pull at your shoulders and head as if it were a brake in the wind

If this was not an issue, I’d guess that the CBR1000RR would be at least a second quicker to 180 mph.  The 0-30o km/h time is 37 seconds which sounds lame but it’s that last couple km/h that takes so long and hurts the ET.

If it could hit the limiter, you’d get 191 mph. If you were to flash and Decat the CBR1000RR and wanted to go faster, you’d need to change the gearing as you’d quickly and easily hit the rev limiter.

The CBR1000RR is far from the fastest of the 1000 cc Superbikes over the last few years but do not let this put you off.

175 horsepower is an astonishing number, and it shows in how it howls through the gears and on to its top speed of 186 mph.

It was not that long ago (depending on your age) when the 135 horsepower of the 1998 YZF-R1   blew us away with its brutal Supercar killing acceleration. And that motorcycle still impresses today.

So, consider that the CBR1000RR is around the same weight but has an extra 40 horsepower at the wheels.