Kawasaki’s Ninja 300 is an entry-level sports motorcycle aimed at new motorcyclists and is the little sister of the Ninja 400 and replaces the Ninja 250 in many markets though in some countries it is still sold alongside at the time of writing.

The Ninja 300 is a machine that offers sporty looks, and decent performance and handling that is accessible to new riders.

It’s a user-friendly package all at an affordable price.

The Nina 300 is Powered by a compact 296 cc parallel two-cylinder engine that makes a claimed 35 horsepower and 20 lb/ft of torque.

These numbers do not sound earth-shattering but are very respectable for a sub 300 cc motorcycle.

Many new riders are interested in the performance capabilities of the Ninja 300 so we thought it fitting to include it as one of the first machines that we will test the acceleration and top speed of. 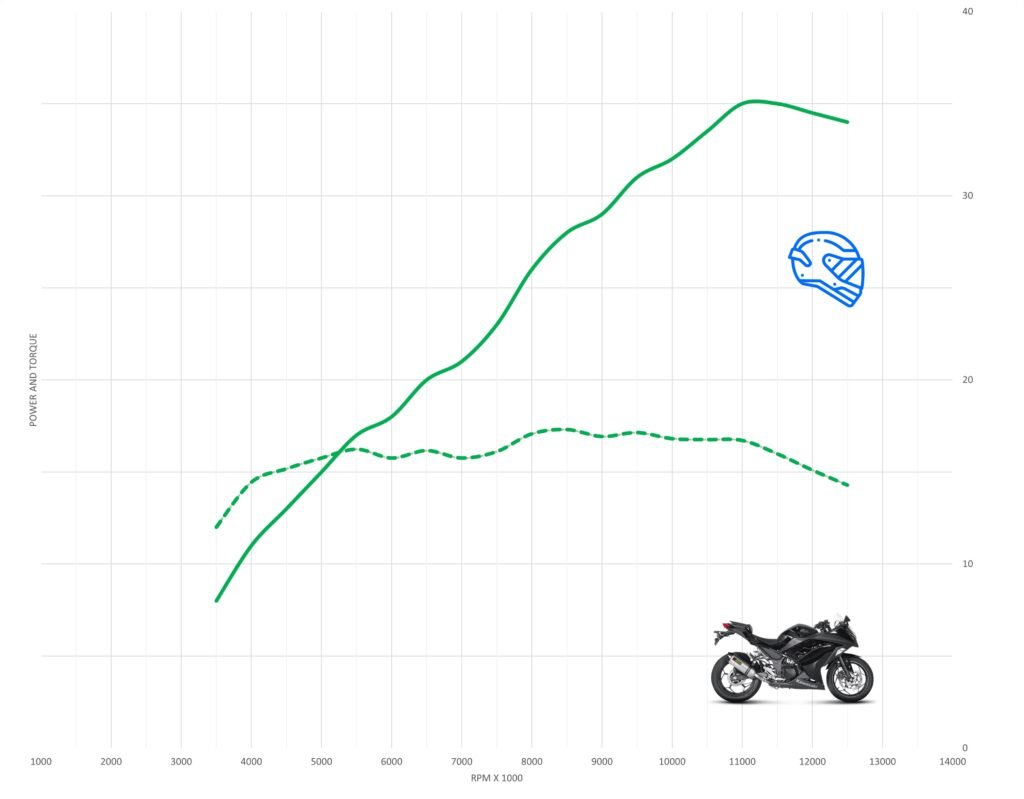 For such a small and compact engine, the Ninja 300 and its 296 cc parallel 2 make a respectable amount of power.

The thirty-odd horsepower the Ninja 300 produces is comparable to the thirty-horsepower two-stroke 125s that some of you reading may recall  ‘Hooning’ around on in your youth.

They were ballistic and very fun machines and a little more hard-edge than the four-stroke machines such as the Ninja 300  that replaced them.

The Ninja 300 produces a very respectable 35 horsepower at the wheels which are delivered at a little over 11,000 rpm.

In motorcycle terms, this will not set the world on fire but is more than powerful enough to get the job done and to put a smile on your face.

If you are a new rider and have never ridden a motorcycle the Ninja 300 will feel very quick.

The engine is smooth and has a reasonable amount of low to mid-end power and torque if you’re in the lower gears, and certainly enough to zip you passed slow-moving traffic.

For best effect, you’d better ‘work’ the engine and ensure that you are in the correct gear with your revs floating around the 8000-rpm mark and the Ninja 300 offers decent drive.

That rpm figure may sound bonkers to a car driver but it’s the normal upper mid-range of a sporty motorcycle engine and especially a small capacity one.

For a long while, the Ninja 300 engine was the class leader. And it was among the fastest if not the fastest four-stroke motorcycle under 300 cc

It only really had the CBR250R and Hyosung GT250, and more recently the GSX250R to compete against. 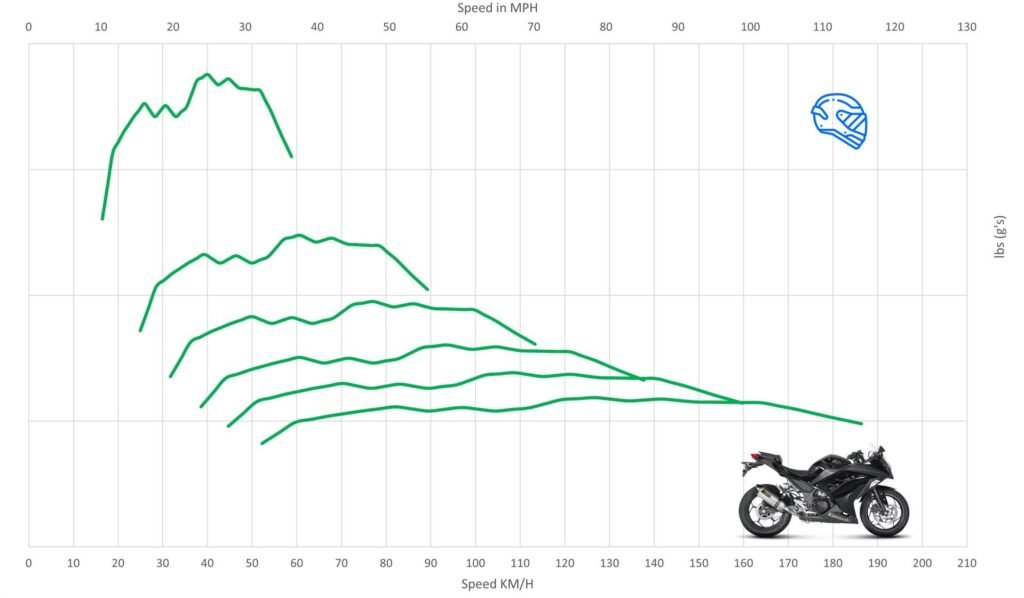 Compared to the KTM RC 390, the Ninja 300 does lack the flexibility of the larger KTM engine but scores more points for smoothness and refinement compared to the more brash single cylinder of the RC.

And if you work the engine and gearbox hard you can keep these bigger bikes in sight though you must really work the gearbox hard and keep that rpm high.

If you don’t use all the power it has the Kawasaki Ninja 300 will struggle to keep them rivals in sight.

The Yamaha YZF-R3 like the KTM RC 390 benefit from a larger engine over the Ninja 300 and thus both produce more power and torque.

As the Yamaha YZF-R3 has a  slightly larger capacity ensures that it produces a little more power and torque through the entire rpm range and at peak.

Kawasaki has since responded with the Ninja 400, a motorcycle that we’ve also recently run against the clock.

Regardless of the advantages that the competitors have, the Ninja 300 engine does a great job in almost all realistic road-riding situations.

Even on the highway in top gear, you can overtake adequately but only if you are not on an incline or facing a very strong headwind.

Ideally, though you should probably drop to fifth gear which will bring the rpm up from around 7600 rpm to 8800 rpm which is very close to where the Ninja 300 produces peak torque.

You could even drop it to fourth gear taking the rpm up to around 10,200 rpm.

To get the overtake done though you would need to take the RPM into the red and shift up to fifth for good measure.

The highway is not really where the Kawasaki Ninja 300 works best. And this could also be said for the Ninja 300s rivals too!

Its engine works much better in town and blasting around on country roads. You of course still have to work the engine, use all of the rpm, and kick it up and down gears.

It is a very fun engine to use. There is no wonder why there are soman y racing series where the Ninja 300 is used. 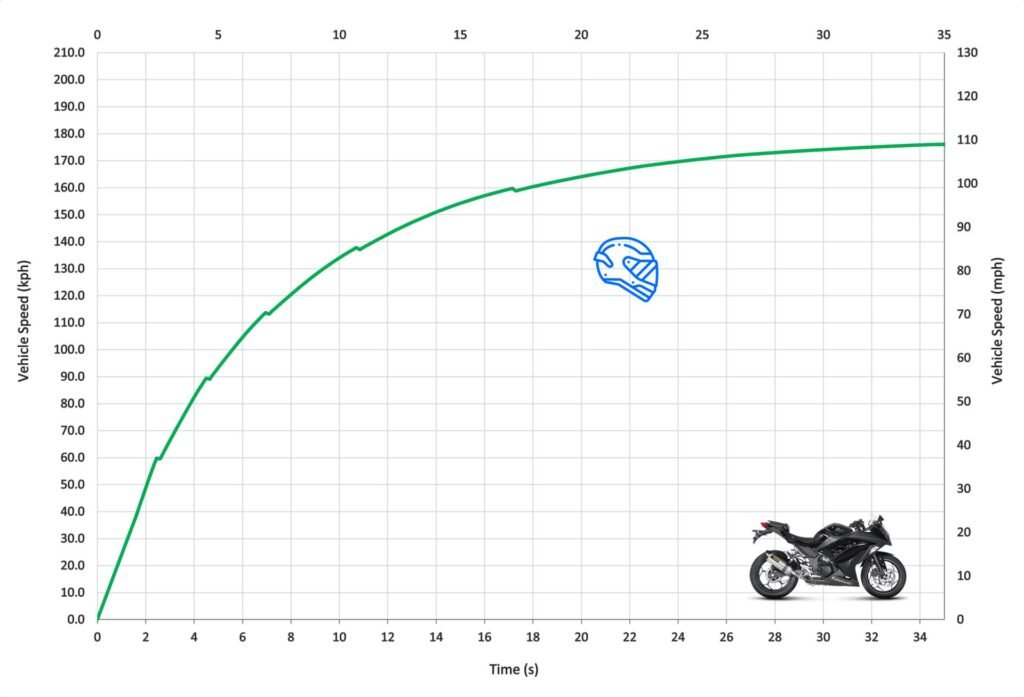 Kawasaki Ninja 300 Acceleration through the gears

Despite only having 296 cc the little Kawasaki Ninja 300 can accelerate quickly up to a point and will beat most hot hatches from 0-60 mph (0-96 km/h).

If you are very skillful it is possible to even show the odd sports car a thing or two with the Ninja 300s impressive 0-60 mph time of only 5.23 seconds.

It is important that you slip the clutch perfectly and shift as quickly as possible with clutchless changes for the best effect.

You must have rpm hovering around 9000 rpm on launching and slipping the clutch and controlling rpm so that the engine does not bog down resulting in your time suffering.

Most learner riders would likely be hitting 7-8 seconds, but a real pro can achieve low five-second times for the 0-60 mph benchmark.

From 60 mph to 100 mph, you still have hot hatch performance, but you’d better make yourself small and tuck those elbows in otherwise the elements will start to hold you back.

In optimum conditions, the Kawasaki Ninja 300 can claim 0-100 mph in 18 seconds and a quarter mile time of 14.10 seconds where the little Ninja hits a terminal speed of 93 mph.

It’s hard work getting the most out of a small-capacity motorcycle when it comes to acceleration and top speed. A slight headwind can mean 5-10 mph lower top speed easily.

It is kind of game over in terms of acceleration once the Ninja 300 is at the top end of fifth gear,

So don’t expect to be cruising at 95 mph with any real overtaking ability though at legal motorway/highway speeds there is enough poke to get you ahead of slow-moving traffic as mentioned.

Accelerating from 70-80 mph time of just 2.1 if using fourth gear. If using sixth gear then maybe add a few seconds but it’s not advisable.

You cannot go wrong with the Ninja 300 as it is a great bike.

Yes, there are newer and faster alternatives, but the Ninja 300 really does strike a great balance between user friendliness and performance provided you like to work a little for that performance.