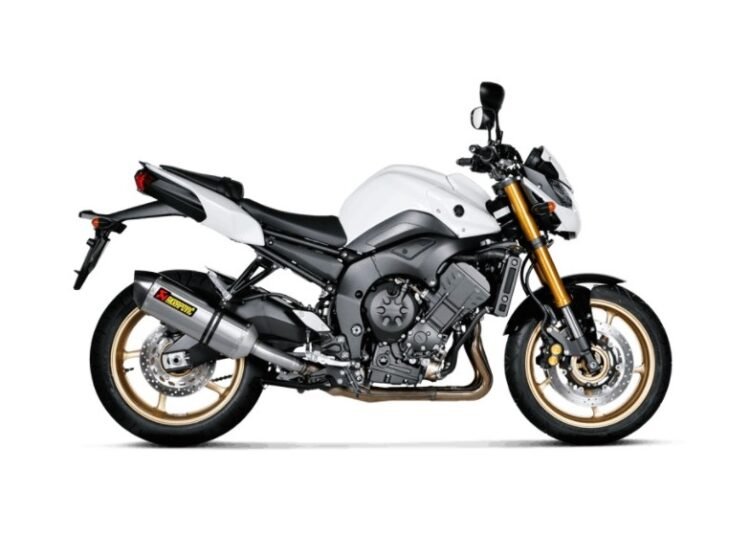 Yamaha FZ8N does the quarter mile in 11.45 seconds 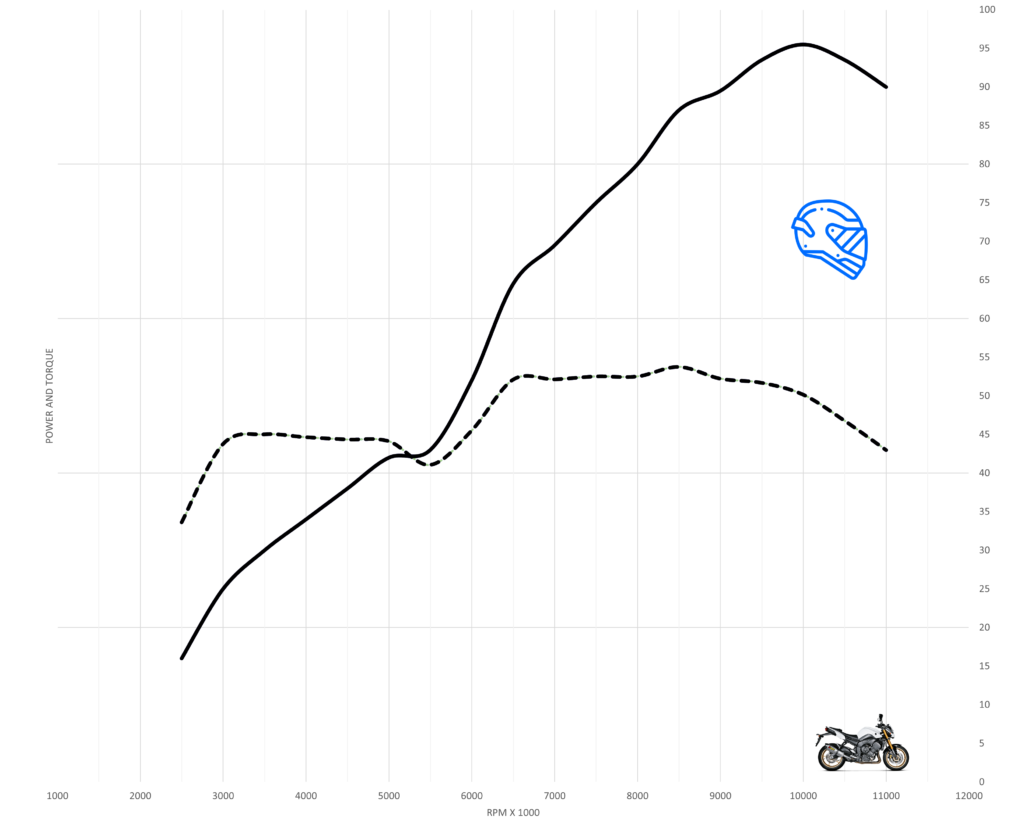 At first glances the FZ8N look exactly like the FZ1. They are effectively the same motorcycle with some minor differences and have the same engine from the 04-06 generation Yamaha

R1, though the FZ8N has a lightened crankshaft for quicker engine response, and the cylinder bores are reduced in size for the capacity decrease from 998 cc to 779 cc.

The piston stroke is the same length as the R1 derived engine, so it shares some of the character of the R1 lump which provide some pros and cons.

Fueling is smooth though unfortunately the engine really lacks below 6500 rpm. Torque from 3000 rpm is nice and flat but adequate at best.

Then, almost just like the 04-06 Yamaha R1 engine there is flat sport at 5500 rpm. The engine then recovers with torque and power shooting up to where it should be. Then the FZ8N drives hard with a nice flat torque and power curve all the way to 11,000 rpm. 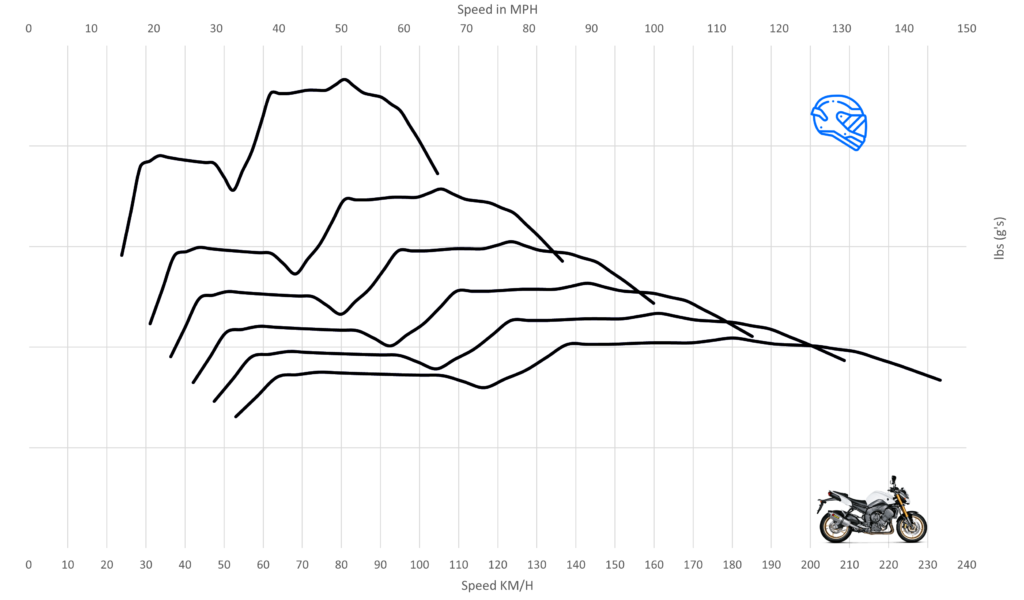 The FZ8N engine really needs to be kept spinning above 6500 rpm if you want to make good progress. Anywhere below that point and especially between 5000 and 6000 rpm the engine is gasping. From 3000 to 5000 rpm is not much better. Thankfully it recovers quickly and then surges like a two-stroke making for an exciting engine that demands that you rev the nits off it..

This 779 cc engine really feels like a 600 cc below 6000 rpm with even the CB650R providing more low-speed grunt in the first three gears.

For highway cursing at 70 mph in sixth gear your right in that torque hole. The engine struggles then at around 75 mph it starts to pick up. It could be worse, though the last three gears of the FZ8N are relatively low.

The reason for the lack of bottom end is down to two things: primarily, the short stroke nature of the R1 derived engine which is not ideal for a naked bike that needs it performance in the midrange and bottom end.

For the street you’d want a longer stroke motor but to reduce engine size from 998 cc to 779 cc, the stroke was kept the same as the R1 with just a smaller bore.

Then on top of that you have the noise and emissions regulations that typically effect power and torque in the midrange. The lacklustre bottom and midrange effected the 04-06 R1 too, and it was widely criticised for it, though it had an insane top-end to make up for it, something the FZ8N doesn’t have quite have.

From 6500 rpm to 11,000 rpm the drive available is good, and it feels faster than it is because of the lack of drive down low. Though, with 779 cc and an R1 derived motor this should be a 120 horsepower engine at the very least.

As FZ8N’ engine retains the short stroke of the R1 it should have retained some of the R1’s rpm potential and could have had a stronger top end to make up for the lacklustre bottom end.

The GSX-S750 is stronger everywhere and gives away capacity. Embarrassingly even a CB650R can trade blows with it in many gears/situations though is ultimately a slower engine that has no right to be as close as it is with the FZ8N.

Thankfully the FZ8N responds extremely well to an exhaust and tune where you see some very impressive gains all throughout the entire rev range, and with much of that bottom end filled in nicely, but as stock its lacking. 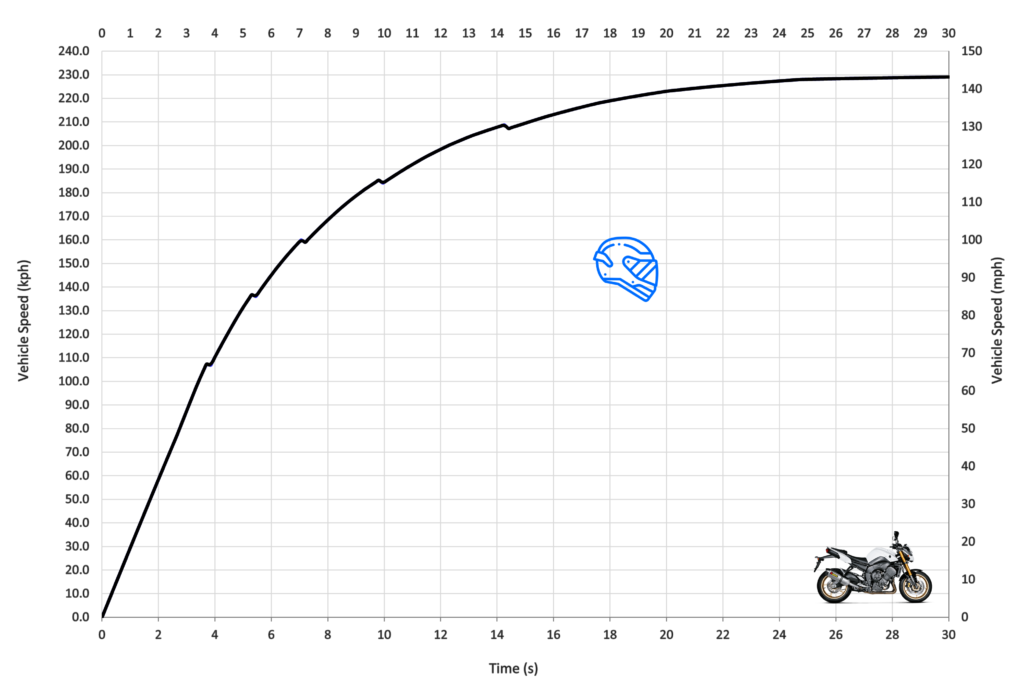 Outright acceleration of the FZ8N thankfully is not hindered by the lacking bottom end as you’re only using high rpm when chasing numbers. Providing you launch from above 7000 rpm you should be good and not bog down.

Launching between 7000-8000 rpm is the sweet spot though at 7000 rpm if you are not slipping the clutch enough revs can drop into that torque hole and you can end up bogging a little.

If you launch her right the FZ8N is quite quick and will nail the 0-60 mph sprint in only 3.30 seconds, which is as fast as pretty much all but the fastest motorcycles out there. 0-100 km/h for the FZ8N comes around in 3.41 seconds.

First gear is long enough to hit 60 mph/100 km/h so the FZ8N does not lose any time when asking for second.

Keep the FZ8N spinning hard and changing up at 11,000 rpm and not long after hooking fifth gear the FZ8N will pass the quarter mile in 11.45 at 121 mph which is a fraction behind the Suzuki.

Despite being down on power compared to the GSX-S750 the FZ8N hits a slightly higher top speed of 143.2 mph. Perhaps it’s a little more slippery or narrower or conditions favoured it, though the FZ8 does provide more room to tuck.

With a faring as per the FZ8S there could be an extra 5-10 mph up top as despise it being a bikini fairing it provides decent cover.