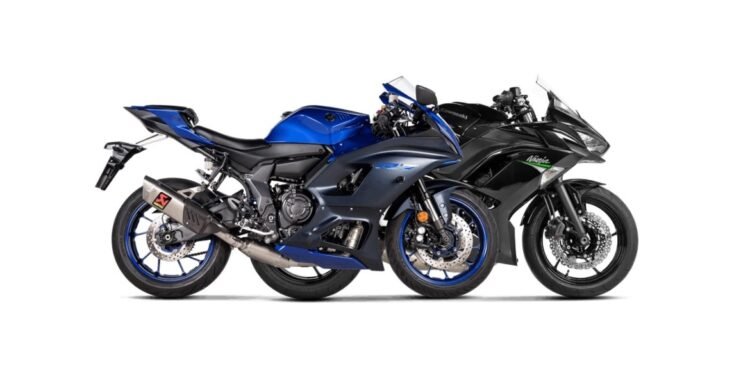 The Ninja 650 is a very popular midrange sporty motorcycle that is up there with the top of the class. Yamaha have introduced the YZF-R7 to shake up the class with their new sport bike based upon the very capable MT-07. 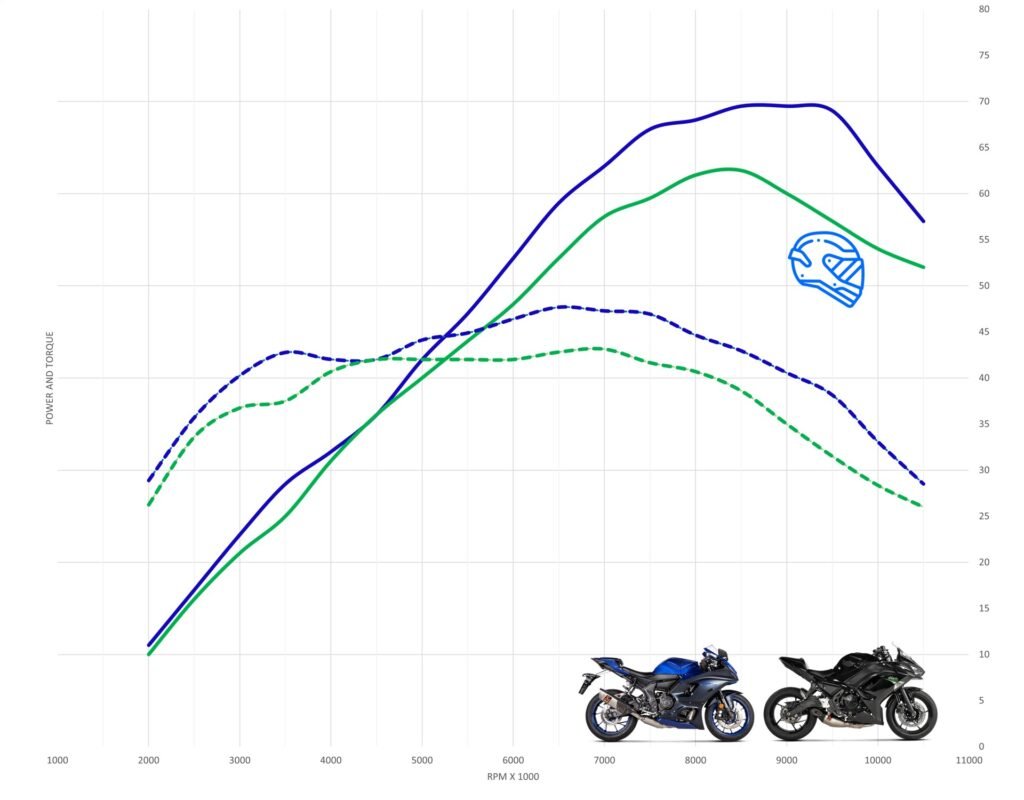 Both the new Yamaha YZF-R6 and Kawasaki Nina 650 are powered by parallel two cylinder engines, though the R7 displaces a little more cubic centimetres with the advantage being 40 cc. It does not sound like much, but the difference can be seen on the dyno.

The R7 has an advantage when it comes to torque too with around 5 ft/lb more peak. There is nowhere in the rpm range where the Ninja 650 beats the R7 and can only match the R7 for power and torque briefly at 4500 rpm though.

Impressively the Yamaha R7 produces the same peak torque as the Ninja 650 from as little as 3500 rpm.

The character of both engines is very similar, and they like to and work best in the bottom and midrange. The R7 is more willing to rev though and picks up nicely at around 4000 rpm while the Ninja 650’s torque curve is flatter.

While both engines’ power curves drop off abruptly the R7 has a larger and more useable spread of power in the top-end though it does drop off more aggressively.

Both engines are grunty and flexible and provide more in the lower rpm than rivals such as the CBR650R. 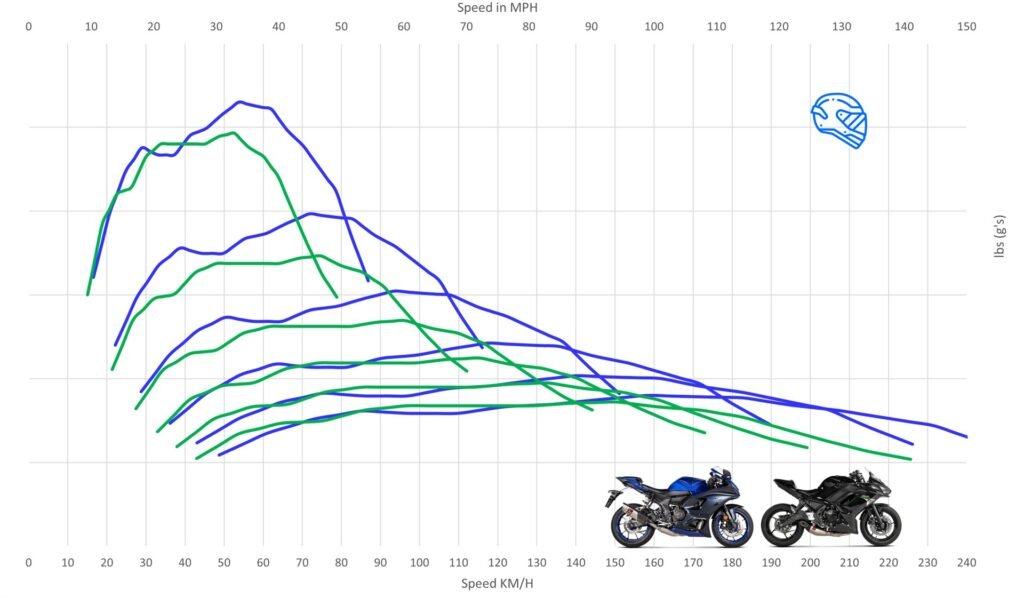 If we look at acceleration in each gear, we can see that the Yamaha R7 dominates and this is in large part due to producing more peak horsepower and torque as well as more power and torque all through the entire rpm range except momentarily at 4500 rpm where the Ninja 650 matches the R7.

The advantage is particularly felt in the first three gears where the Yamaha R7 dominates and punches harder no matter the rpm or speed.

The Ninja 650 has lower gearing in all gears but fairs a little better in fourth, fifth and sixth gears as those gears are even lower comparative to the gearing differences in the first three gears.

This means that despite the lower power and torque and heavier weight the, in the last three gears the Ninja 650 offers similar in-gear performance in these gears; at least for the bottom and mid part of the speed range which is evident with how close the thrust lines are in the thrust graph.

In the top third of the last three gears though, despite the lower gearing of the Ninja 650 the R7 dominates and provides more thrust and acceleration period!

The Ninja 650 does well if considering the deficit in power and torque, and that’s down to Kawasaki’s good choice of gearing that gets the most out of the Ninja 650’s engine.

The R7 on the other hand could run with lower gearing but doesn’t have to in order be competitive against class rivals. 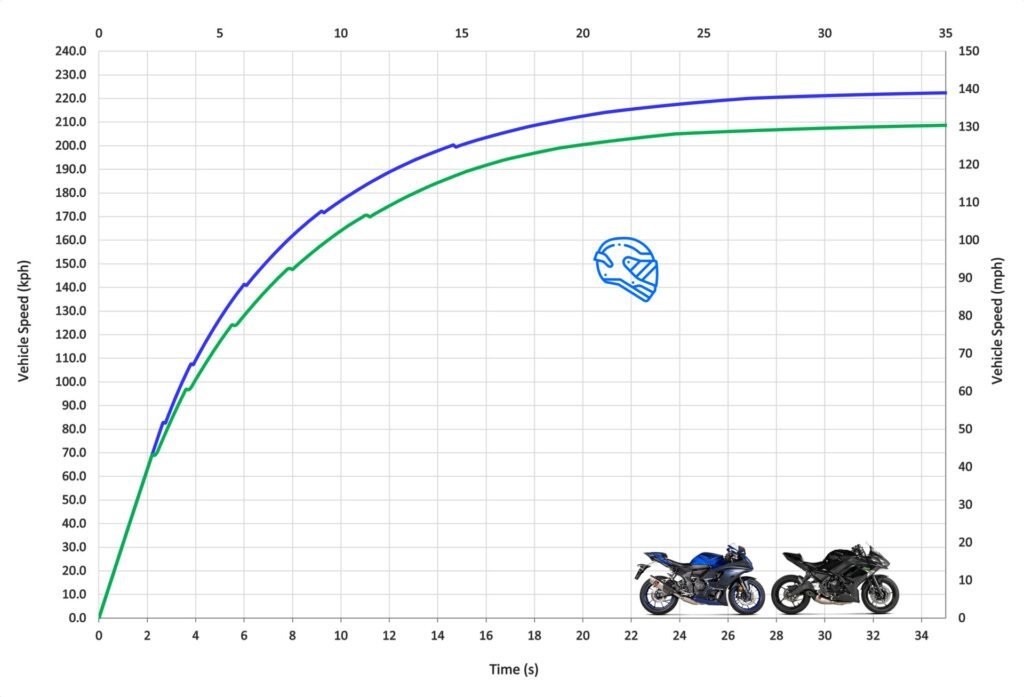 Producing more power and torque and being lighter, we can obviously expect the Yamaha R7 to be faster accelerating and the data clearly shows this.

The Ninja 650’s lower gearing has helped here but there is simply no substitute for power and light weight.
Off the line both motorcycles are very close with generally the differences coming down to rider skill that would determine who’s quickest in the real world. When push comes to shove though it is the Yamaha R7 that can consistently lay down the better times and is capable of 0-60 mph in 3.27 seconds and 0-100km/h in 3.43 seconds.

The Ninja 650 is not too far behind with a very impressive 0-60 mph time of 3.53 seconds. The 0-100km/h time of 3.93 seconds his hurt a little for the Ninja 650 as needs an extra gear change. You could run it right to the redline in second gear and hit 100km/h but thrust really tails off drastically and overlaps with third gear. Despite the extra time to change gear it’s quicker.

The R7 only needs second gear to reach 100 km/h in comparison.

0-100 mph is a good metric for mid-power level motorcycles, as the 0-60 mph sprint is often too similar between bikes to really convey performance differences in a meaningful way. An example when testing the R1, the majority of my 0-60 mph times were in the 3.5 seconds range despite that motorcycle having more power than the R7 and Ninja 650 combined and with some left over.

At around 60 mph the R7 is in front but it’s not by a significant margin but it’s from there on where it starts to assert dominance over the Ninja 650 and connivingly walks away with an advantage from 0-100 mph being around 1.8 seconds.

The R7 is one of a few motorcycles in the class that if you nail it perfectly you can can dip under the 12 second mark for the standing start quarter mile with a 600 Supersport chasing 11.64 seconds. Terminal speed though is somewhat lower at 116 mph.

Typically, most people with a bit of talent would be in the 12s. To dip into the 11s, you must be light and have a very good 60 ft time of 2 seconds or under. And of course, a lot of skill.

You really should not rev both out to redline for best effect, changing up at around 9800 rpm on the Yamaha R7 and approximately 8500 rpm on the Ninja 650.

When the Ninja 650 passes the quarter mile the R7 is around 33 metres in front and continues to add distance.

The R7 is almost faster in every situation compared to the Ninja 650. The Kawasaki can only really trade blows with the R7 if rolling on in fourth, fifth and sixth gears from the bottom or midrange. Other than that, it’s a roll-on and straight-line win almost everywhere else for the R7.