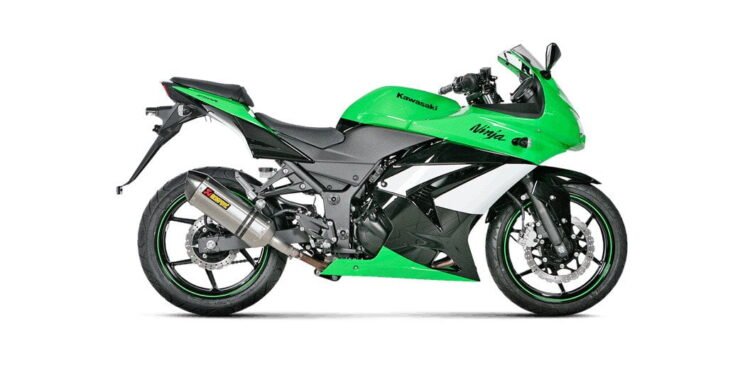 Kawasaki’s entry-level 250 sportbikes have been around in various guises since as far back as 1986 and are known in many markets as the GPX/GPZ 250.

All incarnations have always been hugely popular motorcycles everywhere that they have been sold.

From the GPX/GPZ250 right up until the Ninja 250 are all motorcycles that have provided a great package combining great value, performance fun and ease of use.

The Kawasaki Ninja 300 and 400 are evolutions of the Ninja 250R and are Kawasaki’s response to changing learner laws as well as new and faster machines constantly being introduced by competitors.

Today in the form of the Kawasaki Ninja 250R we still have a 248 cc Parallel-twin engine making 32 hp at the crank depending on the market.

That is only 4 horsepower down on the larger capacity Kawasaki Ninja 300.

For reference, the old GPX 250 was more powerful and considerably lighter than the Kawasaki Ninja 250R.

Today, the Little Ninja 250R isn’t the lightest 250 in the class and is only 4 kg lighter than its bigger Ninja 300 sister

On the plus side, the Kawasaki Ninja 250R comes in at 11 kg lighter than one of its most recent rivals the Suzuki GSX250R.

It certainly seems that all newer motorcycles are getting porkier these days.

The relevance of 250 cc bikes is not like it used to be as many learner laws have changed over the last few years in many markets.

And as a result 250s often must compete with motorcycles of up to 660 cc (albeit restricted) as well as new bigger engine competitors from the same brand.

But due to the great value performance proposition 250s  are still very much relevant in particular in Asian countries where larger capacituy machines are often out of the reach for many people.

Kawasaki’s little Ninja 250R has a considerable amount of competition so how does it stack up against some of the other similar engine-sized models we have already tested as well as the much larger engined competitors? 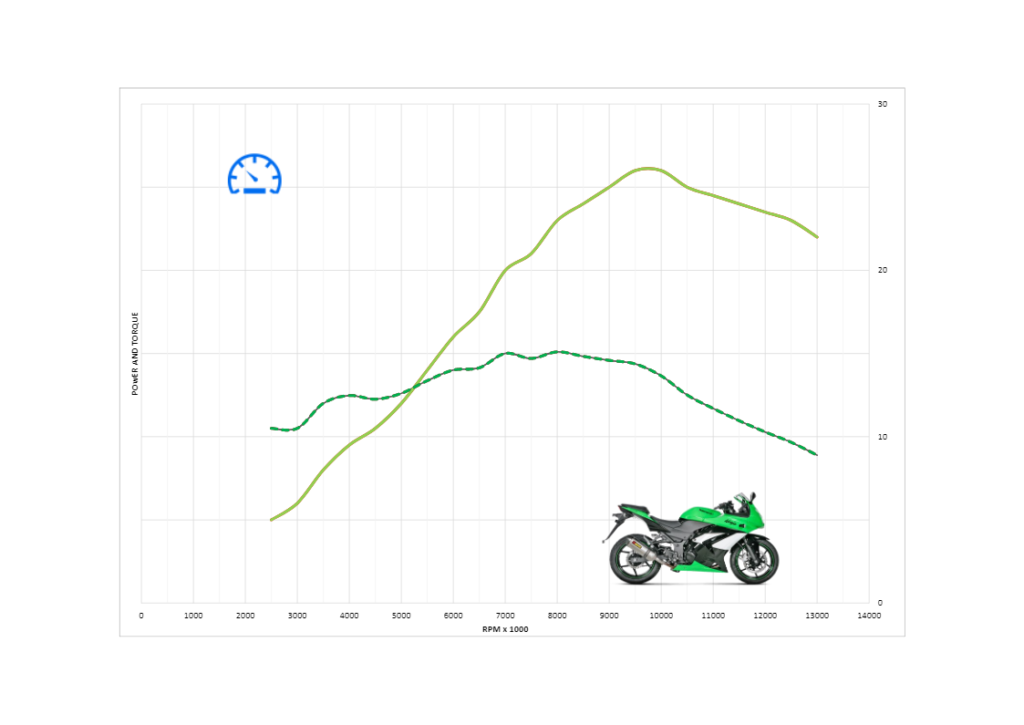 There is only so much power that can be had from a budget liquid cooled 249 cc parallel-twin engine.

Up against other 250s that the Ninja 250R competes against other machines such as the Honda CBR250R and Suzuki GSX250R these claimed figures stack up very well.

There are some single-cylinder equivalents such as the Honda CBR250R or the CBR300R that have a little more peak torque and deliver more throughout the entire rpm range.

Of course, though it makes sense that the Honda CBR300R will have more torque thanks to its capacity advantage.

In the case of the Kawasaki Ninja 250R, you must keep the analog tachometer needle above the 7000 rpm mark, though in most instances and in-gear at the same speed, it is a more flexible engine than the Suzuki GSX250R

Surprisingly the Little Ninja 250 gets close to the Kawasaki Ninja 300 in lower speed in-gear shove despite being 45 cc down.

The Kawasaki Ninja 250R does have plenty of overrun as despite making its peak power just under 10,000 rpm,.

This is because it still makes power all the way to 13,000 rpm if you chose to scream the little 250.

Though if you take it that far up the rpm,  power does tail off to around 22 hp.

Making a respectable amount of power around 3000 rpm after its peak of 26 hp allows the rider to hold onto a gear a little longer if riding on the track or your favorite twisty back road.

This overrun helps ensure that the engine is more useful and flexible for the rider making it easier to make progress without having to jump up and down the gears as often.

You won’t break any speed records with the Kawasaki Ninja 250R, as after all, it is only a 250 cc motorcycle that could be lighter than its 170 kg curb weight.

Also, It could do with making a little more power too. But if you feed the little screamer gears it accelerates respectively well. 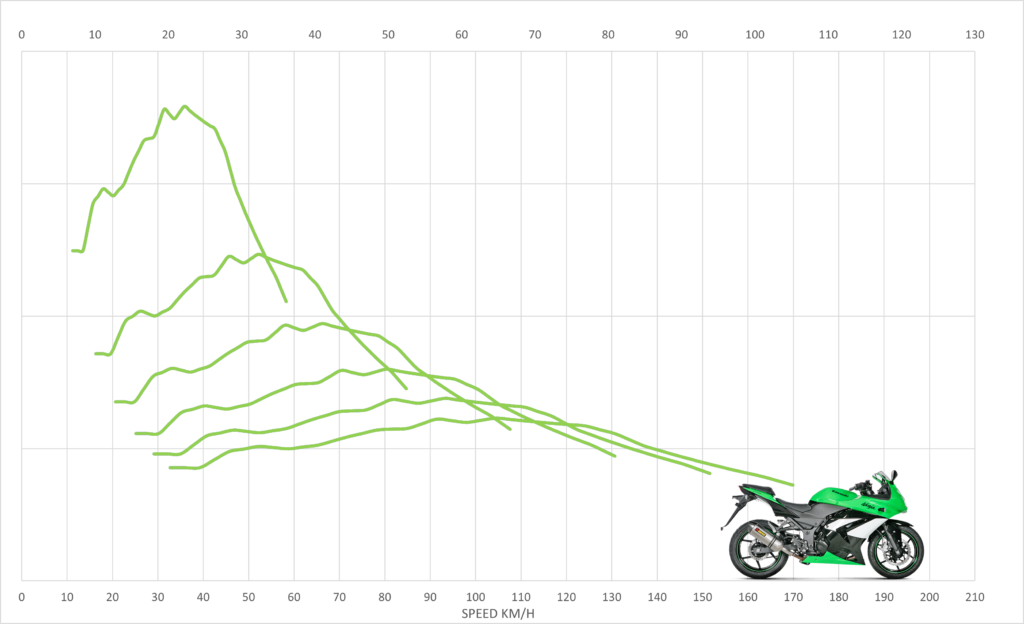 If you are young and this is your first motorcycle, you’re probably keen to know how the Ninja 250R compares to other bikes as well as perhaps to some cars that your mate might have.

Like all smaller engine motorcycles with low gearing and buzzing engines, it needs two gear changes and 3rd gear to reach 60 mph.

The two gear changes do hurt its time a little as a larger motorcycle can often easily hit 60 mph with just one gear and no time elapsed time hurting changes.

With a quickshifter you could easily dip the Kawasaki Ninja 250R to under 7 seconds from 0-60 mph as you’d save some time when shifting though the clutch and gearbox are good and shifts can be executed relatively fast.

The Ninja 250R is not too fussy at what rpm you shift for best results as anywhere between 10,000 and 13,000 rpm will by and large yield remarkably similar results against the clock.

You do need a heap of brutal clutch slip for the best launch and times and should not let the rpm drop below 7000 rpm.

The Ninja 250R achieves quarter mile time in 15.86 seconds at a respectable 83.7 mph.  Your times may vary based on your size, weight, and weather conditions.

These are times that would be considered decent for a sporty hatchback 10-15 years ago but now many entry-level Eco box cars can match the Ninja to 60 mph and pull away from it thereafter.

A Volkswagen Tiguan 2.0T can pip a Ninja 250R over the quarter-mile sprint and certainly easily exceed the Ninja 250R’s top speed of 97.56 mph which is achieved in around 50 seconds from a stop.

The most realistic top speed for most if screaming the Ninja 250R through the gears in real-world conditions would be 90 mph.

This is unless of course, you want to put your chin on the tank and contort your body so that you are as small as possible, and then for that bit extra pull your mirrors in.

While doing the former, the Kawasaki Ninja 250 might show 110 mph plus on the speedo but almost all motorcycles lie and over-read by as much as 10-15%.

The fact that your average tin box with wheels might match or beat you and your Kawasaki Ninja 250 at the traffic light GP does not mean that you should be disappointed.

The sprint from 0-60 mph in 7 seconds was considered ‘quick’ a few years back and nothing has changed, especially if the Kawasaki Ninja 250R is all you must compare to.

Sure if you jump off of a Yamaha YZF-R1 or out of a 911 Turbo the Kawasaki Ninja 250 will feel slow but that would be unfair to compare.

If we compare the Kawasaki Ninja 250R to some of its closest rivals such as the Suzuki GSXR250R the Ninja walks it convincingly.

In the real world though, and at the traffic light GP, the Kawasaki Ninja 250 does what it is supposed to do.

You can blast off the lights, win some and lose some while you scream the little 249 cc engine to 13,000 rpm with a huge smile on your face.

On slow twisty country roads, the 26 hp is more than enough to have fun while you work that engine hard.

The Kawasaki Ninja 250 only shows its engine weakness on big fast roads or on the highway, especially if you want to keep up with or overtake faster-moving traffic as there is not much ‘go’ above 80 mph.

But this weakness is there with all 250 cc motorcycles and the Ninja is certainly far from the weakest and.

It is actually up there in the top at which point further tests of other 250 cc motorcycles will no doubt show.

There are a ton of tuning parts and skilled tuners that can get the Ninja making 35 hp at the wheels easily and thus making it a heap faster than it is.

A tuned Kwasaki Ninja 250R could no doubt achieve low six-second or even high five-second times from 0-60 mph if put to test. 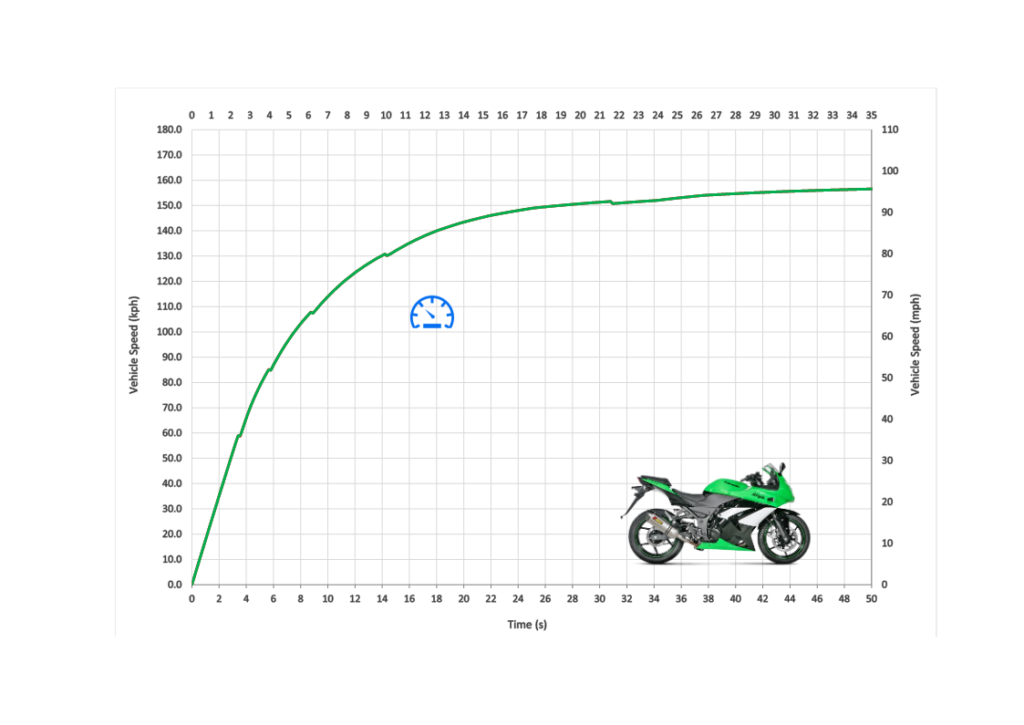