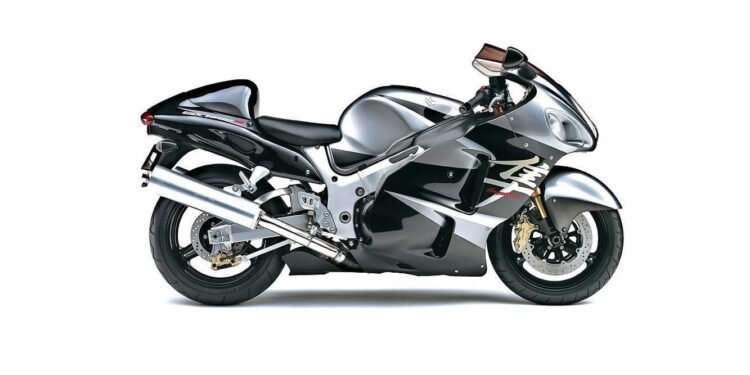 The OG Hayabusa is ballistic even today

We are all no strangers to Suzuki’s legendary GSXR1300R Hayabusa which is a motorcycle that arguably created the Hyperbike class of motorcycles we know and are so fond of today.

The Hayabusa was a direct answer to Honda’s CBR1100XX Super Blackbird and Kawasaki’s ZZR1100 which are two motorcycles that traded blows in pursuit of claiming the top speed motorcycle crown of the late 90s.

With class-leading aerodynamic bodywork and a 1298 cc engine producing a claimed 173 horsepower at the crank.

For a Hyperbike it was light too, (for the class) weighing 215 kg dry set the standard for the class. This undercut the Blackbird’s 223 kg weight by 8 kg while producing 9 horsepower more claimed.

When measured at the wheels this was a larger number as the CBR made more than the typical 12% less rear wheel horsepower than what the crank claimed figure would suggest and closer to 15%.

The moment the motorcycle press took to the road and strip, it became obvious that Hayabusa was the new ‘fastest’ motorcycle in the world.

Hayabusa aptly means peregrine falcon in Japanese which is a bird of prey that often serves as a metaphor for speed due to its insane dive speed as it locates and bombs its prey.

While diving, this falcon is known to achieve speeds of 180 to 202 mph, the fastest of any bird in the world.

It is said that the choice of name for the bike was made because one of the Falcon’s prey is the Blackbird.

This allegedly reflected the intent of the Hayabusa designers to unseat the Honda CBR1100XX Super Blackbird as the world’s fastest production motorcycle in this somewhat typically Japanese symbolic way.

Depending on your choice of magazine, top speeds for the Hayabusa ranged from 180-200 mph so take your pick.

For the most part, the average for the unrestricted models fit somewhere in the middle and those to top speeds were faster than Honda Blackbird and Kawasaki ZZR1100 by around 10 mph on average.

The first generation of Suzuki’s Hayabusa engine was a 1299 cc liquid-cooled inline-4 engine with sixteen valves driven by double-overhead cams.

Despite being the most powerful production motorcycle engine ever, it was not actually anything remarkable in terms of design.

The DNA of the engine had pretty much been around for many years before in the GSX-R1100, with the last incarnation at 1127 cc.

While new in many ways, you can think of the 1299 cc Hayabusa engine as an updated larger capacity, and more powerful version of the legendary GSX-R1100 engine.

It also had a  ram air system that delivered extra power at high speed though, a figure that has never been disclosed or ever measured accurately. 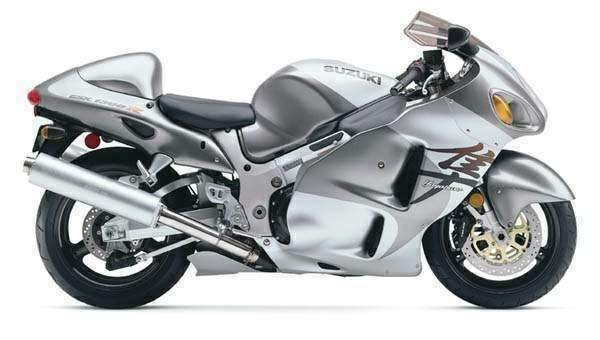 The Hayabusa quite easily dislodged the Blackbird from the top of the pile but Suzuki wasn’t to have it their own way for long.

It seemed that Kawasaki was not too happy that their long-in-the-tooth ZZR1100 was relegated to the third position in what was an emerging speed war between three of the big four Japanese factories.

Introduced in 2000 and arguably faster, Kawasaki’s slightly more powerful ZX-12R made the Hyperbike class now a class of two.

At the time the fastest production car was McLaren’s 241 mph F1, a car that was drastically out of the reach of any normal person.

Most cars that could get close to, or crack 180 mph were also very expensive and not accessible to the average person.

As the speed war between Suzuki and Kawasaki appeared to be escalating the fact was not lost on anyone that a 190-200 plus mph motorcycle could be bought for Eco box car money.

It was rumored that the EU authorities had a ban on the pipeline, either speed or power limiting.

Before the authoritarian whip of any government could knee-jerk in some new anti-fun legislation, motorcycle manufacturers quietly agreed to electronically speed-limit their fastest motorcycles.

That speed was the arbitrary number 186 mph (300 km/h) and could not be surpassed.

This speed was said to be a ‘gentlemen’s agreement’,  with that informal agreement not going fully into effect until the year 2000 and still honored to this day – allegedly. 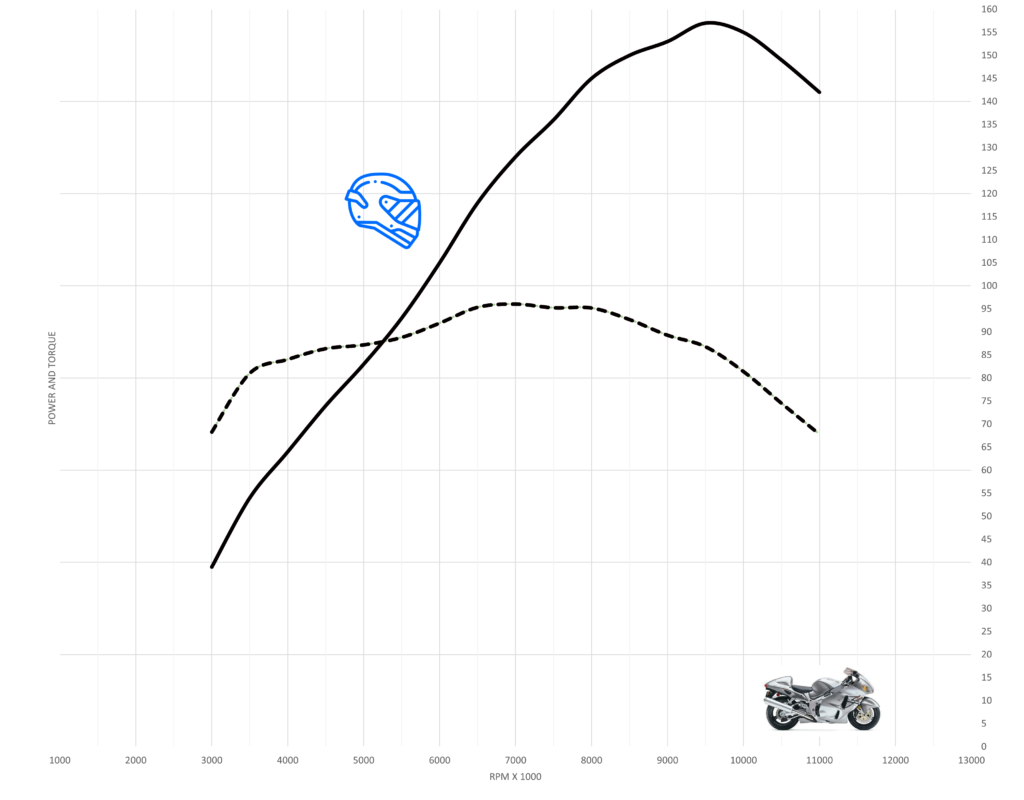 The Hayabusa made 158 horsepower at the wheels, not including the ram-air effect, a peak figure that was around 20 hp at the wheels up on its nearest rivals – the Blackbird and the ZZR1100.

By today’s standards, 158 hp at the wheels might seem average, but for the time this figure was unheard of for a stock motorcycle and was delivered in a grunty senseless way only a 1300 cc motorcycle could.

The engine is great and hugely smooth and flexible making more power and torque all the way through the rpm range than any of its rivals at the time.

Yamaha’s newly introduced 1998 R1 was the only motorcycle that could match the Hayabusa’s in-gear grunt, but it ultimately lost out as speeds got silly.

Despite the monster engine and the fact that at the time it was the most powerful production motorcycle, the Hayabusa actually did not feel that much quicker in the lower gears as say an R1 or ZX-9R of the time.

These are motorcycles that had 20-30 less horsepower at the wheels than the big Suzuki but they were much lighter.

It was very likely the extra 30-40 kg that Suzuki carried in girth might have added to it feeling a little less urgent, but in reality, it wasn’t!

The Hayabusa was just as fast if not a little faster with that mentioned weight actually making the Suzuki much more stable and well-mannered under hard acceleration in the lower gears.

The litrebikes on the other hand were more nervous and prone to wheelie or flap their bars wildly, making them perceptively feel faster. 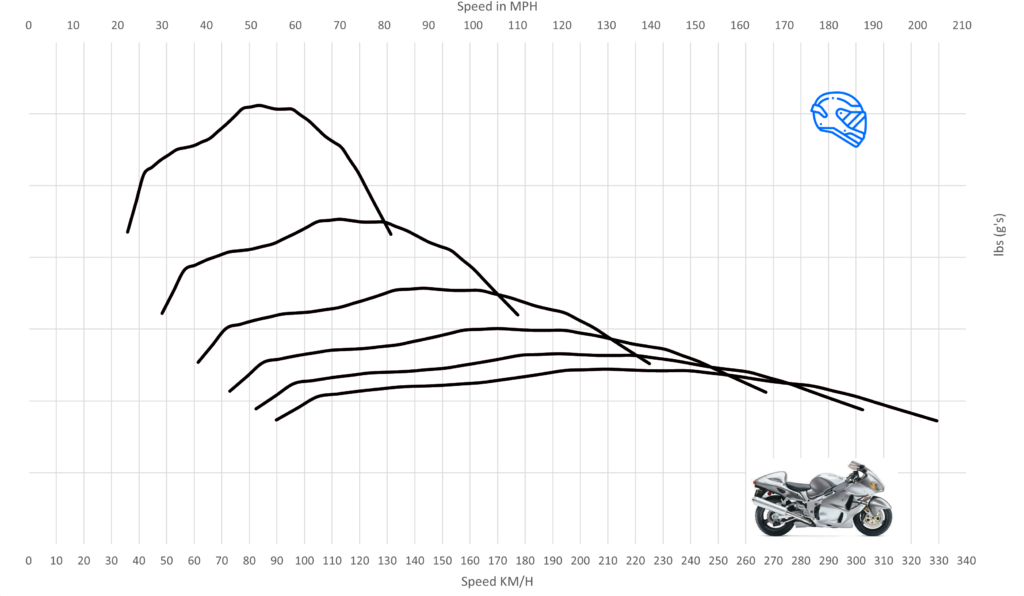 From a stop, this meant that the Hayabusa was by big-bike standards quite easy to launch and aided by its typically slick Suzuki gearbox and progressive clutch.

The Hayabusa wis a motorcycle that in the right hands can consistently dip under 10 seconds barrier in the quarter-mile sprint.

This is a benchmark that only a couple of stock motorcycles at the time were unofficially timed at and that were arguably one-offs not easily repeatable.

Being lighter and making 20 horsepower more than Honda’s Super Blackbird at the wheels….

The Suzuki Hayabusa’s main rival in terms of straight-line speed actually came from the 1998/9 YZF-R1 at the time.

The Yamaha YZF-R1 was more accelerative than the Blackbird and the ZZR1100 and only lost out to those machines at the top by a few mph due to worse aerodynamics and minuscule fairing and screen to tuck behind.

While the Hayabusa bettered the R1 at the top end, the R1 and its 150 hp and 177 kg package, were hugely accelerative in any gear at almost any speed.

The Hayabusa would only really edge away from the R1 above 140 mph if it really came to it and then respectively disappeared.

Fast bikes magazine was the first to coin the Hayabusa as the ‘Highwayabusa’ for obvious reasons.

The Hayabusa still consistently put out the best times at the strip compared to any other machine.

Our Hayabusa is a good one and did not disappoint with a quarter mile in 9.98 seconds and a terminal of 145 mph.

The Hayabusa achieved a very impressive 0-60 mph in 2.75 then relentlessly accelerated and scored a 0-180mph time of 20.88 seconds.

This time is a little faster than the similarly powerful but much lighter bikes suck ad Suzuki’s very own K5 GSX-R1000.   This is due to Suzuki’s fantastic aerodynamics coming into play at a very high speed.

The Hayabusa was particularly impressive compared to rivals of the day above 140 mph, where its big power and class-leading aerodynamic could really enable the Hayabusa to gap and pull away from competitors.

On the Quarter Mile, the Hayabusa can match or beat many of the latest litre bikes that have surpassed the Hayabusa in terms of peak HP and are much lighter too.

This is down to the Hayabusa’s porky weight and long wheelbase that makes its power much more accessible for consistent launches.

While the Suzuki Hayabusa is hugely strong above 140 mph, it is convincingly left in the dust by the very latest 180-200 horsepower Superbikes.

As much as we love the ‘OG’ Hayabusa and think of it as almost unbeatable today, modern literbikes easily walk away from it once speeds get silly. 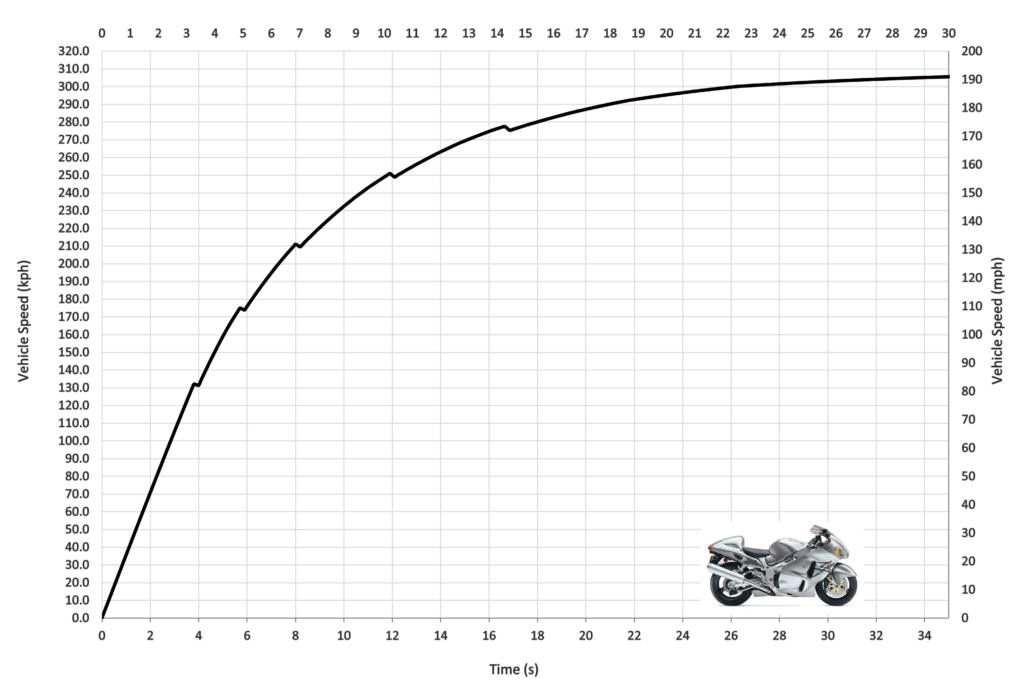 We have had unofficial numbers of 200 mph and speeds even under 180 mph!

But of course, different atmospheric conditions, marginal differences between bikes, and different riders of varying sizes are all variables that contribute to different measured top speeds.

Some magazine road testers were known to remove the mirrors to eek that extra few mph from the Hayabusa.

For argument’s sake, we can safely say that the unrestricted Hayabusa is a 190 mph plus motorcycle bone stock, and our Suzuki Hayabusa hit an impressive top speed of 190.77 mph.

Most runways are around two miles long, so of course, an extra few mph could be achieved if at Nardo or at 3 am on a dead straight endless highway devoid of traffic.

In the age of 200 horsepower plus motorcycles, the original Hayabusa still evokes fear and respect from all even twenty-plus years on.