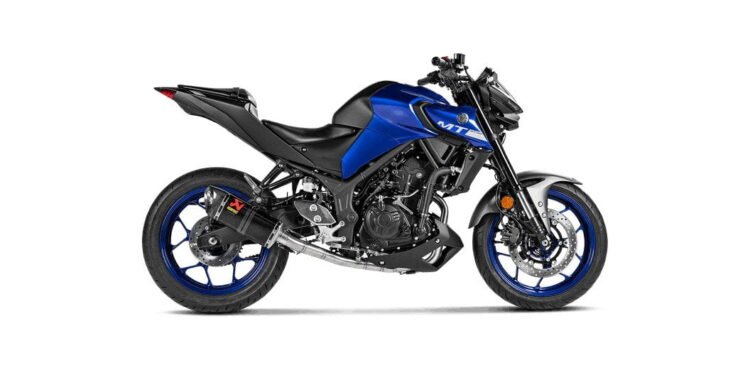 Yamaha’s MT-03 has been with us for a while now but actually started out as a motorcycle powered by the 660 cc single cylinder engine donated from the XT660. That model ran from 06 to 14 alongside the MT-01 that was with us from 05 to 14.

Despite the ‘MT’ names these two motorcycles could not be more different and only shared distant DNA via the series name ‘MT’ would suggest.

In 2014 Yamaha reimagined the MT series with the introduction of both the MT-07 and the MT-09. In 2016 both models were joined by the MT-10 and the new MT-03 which we are performance reviewing.

At least now all new MT range all share at least a few things in common despite having quite different engines and configurations. They are all naked motorcycles with a focus on attitude and performance under the badge of ‘MT’ which as far as I am aware means ‘Maximum Torque’.

The new MT-03 looks just like its bigger sisters in the MT range but has lost half the capacity of its predecessor as it is now powered by the same 321 cc parallel two-cylinder engine of the Yamaha YZF-R3 though it makes very similar peak power to the model it replaces.

Just like many naked variants of their sportier faired version the MT-03 is aimed at a similar rider who wants a little bit more comfort and practicality wrapped in the aggressive naked style language we have become used to with many recent naked motorcycles.

In what is a very crowded entry-level and learner motorcycle segment the MT-03 competes with many naked and faired motorcycles across a wide range of engine sizes though its nearest rivals would be the Z400, CB300, and Duke 390. 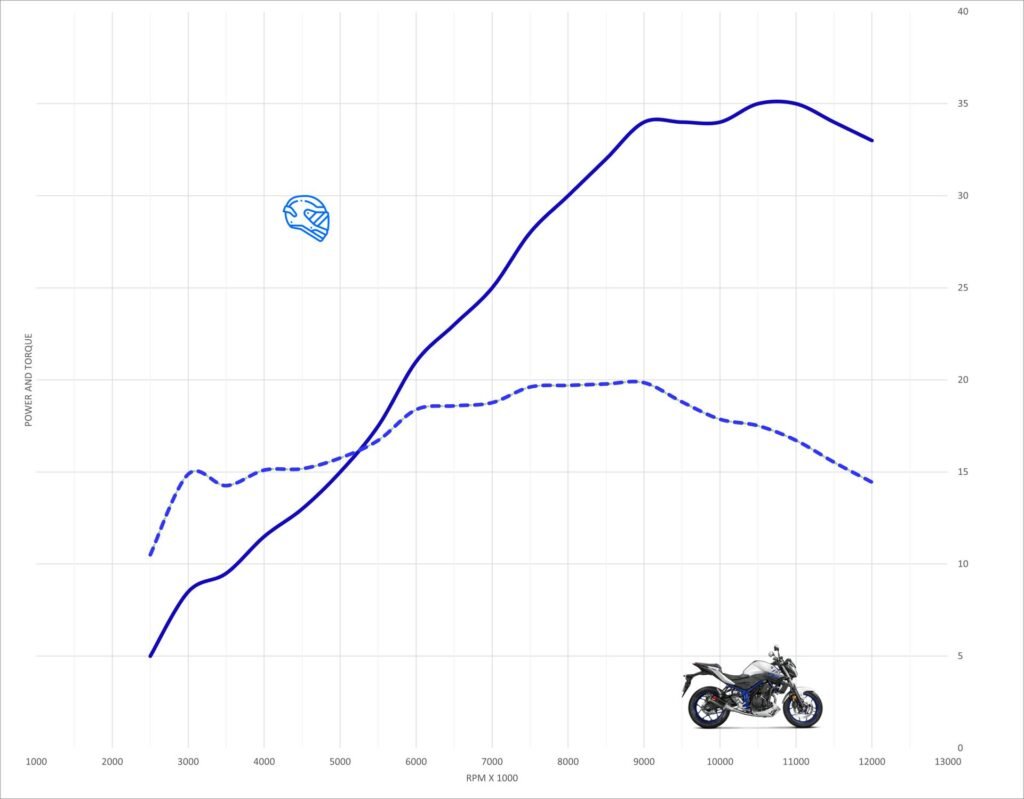 We see the MT-03 with the same familiar engine as the YZF-R3.  It’s a 321 cc two-cylinder engine making a claimed 42 horsepower at 10,750 rpm and 22 ft/lb of torque at 9000 rpm.  It is a compact and lightweight engine that thrives on revs just ike many other smaller capacity engined motorcycles.

On the dyno, the MT-03 produces a very respectable 36 horsepower at 10,400 rpm and 20 ft/lb of torque at 9000 rpm. These are good numbers though they are a little down on the YZF-R3 we tested earlier.

Also, the curve is a little less smooth and the throttle a little more snatchy than how I remember the YZF-R3.  There are parts of the rpm range where the MT-03 makes a little more power and torque than the YZF-R3 though I would put this down to our example running with a slip-on exhaust that has not been set up on a dyno.

Still, the power and torque curve is particularly good as the MT-03 drives well from as little as 3000 rpm. 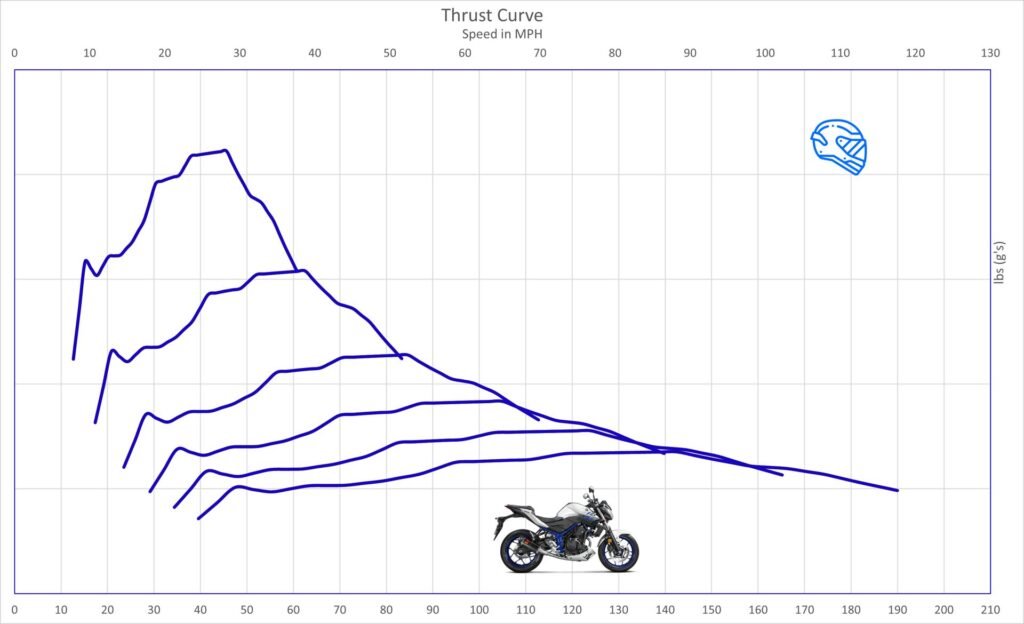 The little dip you see at 3500 rpm is not really felt on the road.  As you drive through 4000 rpm the engine starts to gain in urgency and picks up strongly at 6000 rpm and drives hard to 9000 rpm where we see another momentary dip, but then picks up again at 10000 and drives nicely until a little over 12000 rpm.

If this MT-03 was stock I suspect would see no dips or much less produced dips though again it is not really felt that much on the road and it is unlikely if it affects performance. Despite the curve from the MT-03 and the YZF-R3 looking slightly different they feel the same on the road from memory.

Like all smaller capacity motorcycles, the MT-03 can’t get away from the fact that it has a small engine, so no matter how well tuned the bike is, if you want to really move you really need to have the rpm’ up and the MT-03 is no different and really thrives above 6000 rpm.

Though compared to the Ninja 300, Z300, and the CB/CBR300 the MT-03 betters them for flexibility but also has the added advantage of having more peak power once the rpms go above 6000.

The only engine that has the edge is the 80 cc larger Z400/Ninja 400, but the advantage is not as high as you would think if only looking at the dyno curves. Also, we could say that the Duke 390 is a little stronger.  Here you can see the Ninja 400 vs the YZF-R3 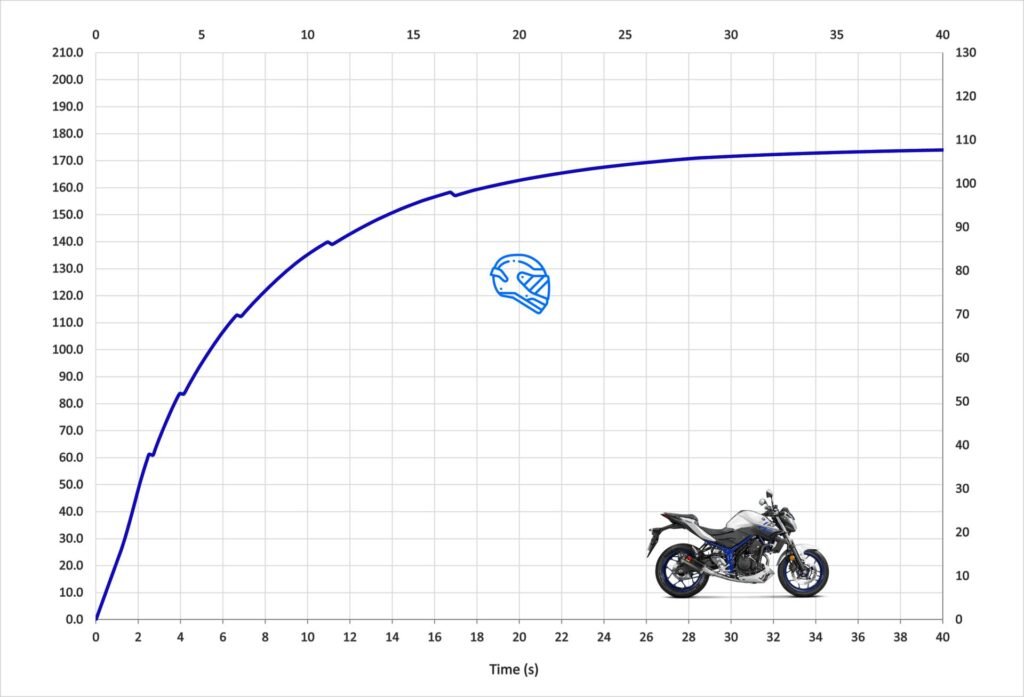 With the same engine as the YZF-R3, we expect similar real-world performance. Any deficit would be down to the fact that the MT-03 is naked.

Typically, naked versions of sport bikes are de-tuned for low-end and midrange, as well as opting for lower gearing to increase their in-gear acceleration and to counteract their poor comparative aerodynamics but we have not seen this as often with the naked entry-level and learner motorcycles.

They seem to run the same engine spec and gearing as their sportier versions and the same can be said about the MT-03.

Launching the MT-03 is pretty much the same as launching the R3. Clutch progression and feel are exactly the same with the MT-03 having a nice and light clutch with a distinctive and well-defined biting point.

The MT-03 is easy to launch with the best results coming from a firm but progressive clutch dump between 8000-9000 rpm.

The key is to get the clutch engaged as quickly as possible but without the rpms dropping below 8000 rpm otherwise, it will bog down, and you will add a whole second to your 0-60 mph time.

Once engaged you can pretty much take each gear to just a fraction before the redline and shift. It’s pretty straightforward, though watch out for wheelies in first as it will lift which is a hoot on a learner bike.

Surprisingly, the MT-03 pipped the R3 to the quarter mile with a time of 14.05 and a terminal speed of 92 mph.  It is only after that point the R3 slowly would real in the MT with the 0-100 mph time for the MT arriving in 18.82 seconds which is almost two seconds slower than the R3.

It looks like the MT-03’s lack of aero starts to rear its ugly head from 80 mph onward and especially so from 90 plus mph but it does remarkably well considering.

While we do correct our data for weather and conditions when necessary, there is nothing like running two bikes back-to-back on the same day which is where the R3 would edge the MT-03 consistently all other things being equal due to its better aerodynamics.

The MT-03 managed a top speed of 108 mph. Like all naked bikes, there is not much protection from the elements, so this does eat into the available power which in the case of the MT-03 is only 36 horsepower.

Top speed on the MT-03 can almost be had in fifth if it were not for having a few more rpm so sixth is required where revs barely rose and sat dead on 11000 rpm.  I am sure with some tweaking of my tuck a few more mph could be encouraged and if you are a smaller rider, I bet that you could hit 110-112 mph.

As our MT-03 example had an exhaust and probably was not running as well as it could this might have influenced our top speed results to the negative.  If we get our hands on a totally stock bike, we will return to this and update the numbers.

On the road, the engine of the MT-03 is genuinely nice and it punches above what its 321 cc would suggest.

Yamaha has done a great job making an engine that has a good spread of power while also making a respectable peak figure and all from only 321 cc.

The MT-03 feels like it is a 400 almost. In most situations, you can use a gear higher than many of its rivals and if wanting to overtake at highway speed you only need to drop down one gear to fifth and the MT-03 has more than enough to get you past traffic quickly.

Ultimately the MT-03 shines much more on slower roads and not big fast open roads as 36 horsepower no matter how well delivered can only offer so much so you are wanting more power if you are asking for performance above 85 mph but anything below the MT-03 offers peppy and fun performance.