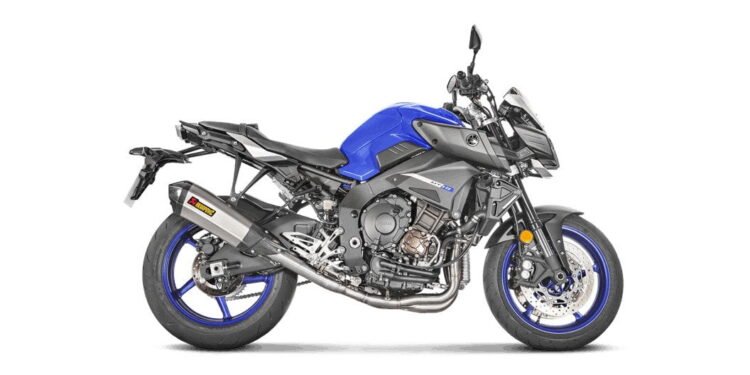 The MT-10 uses the brilliant crossplane inline 4 that came from (at the time) the new 2015 YZF-R1 but was re-tuned to focus on low to mid-range torque.

The looks are a little decisive but despite this, the MT-10 has become a very popular motorcycle for those that want that crossplane four-cylinder sound and lunacy of the R1 but packaged in a motorcycle that is not un apologetically track-focused like the R1.

This definitely does not mean that the MT-10 is in some way a soft version of the R1 without clothes as it is very much an extreme hooligan motorcycle in its own way. 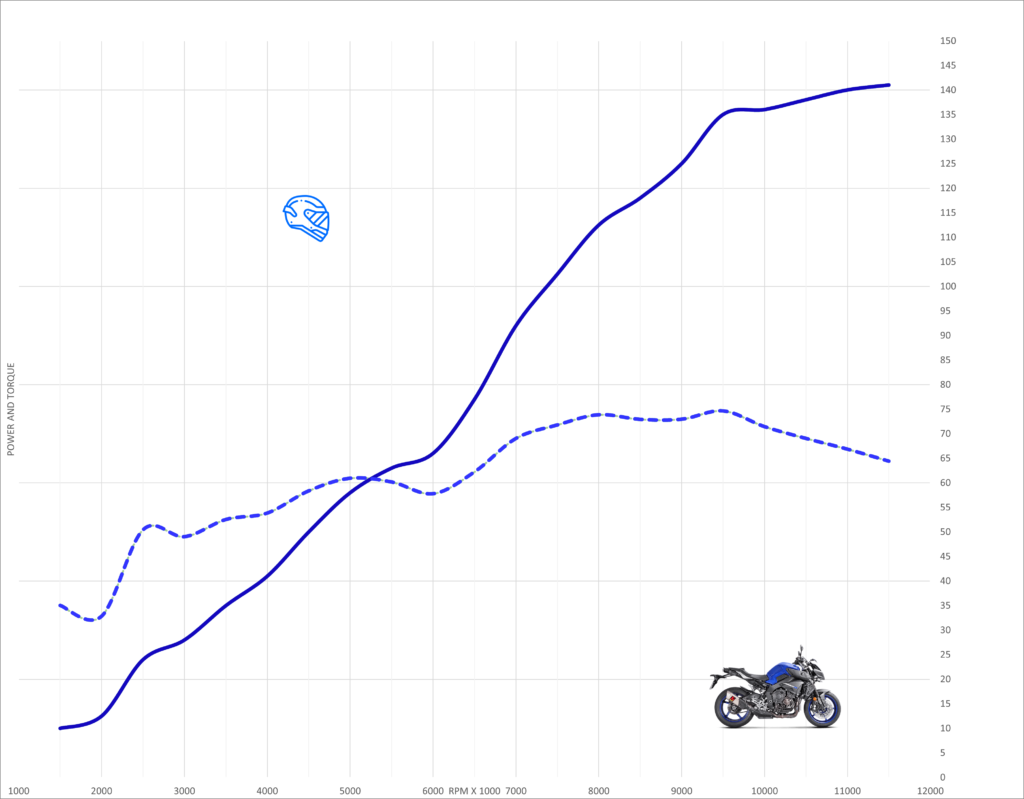 We have seen many engines used in Supersports, Superbikes, and Hyperbikes that were recommissioned in a ‘de-tuned’ state and transplanted in naked variants of the same bike over the years.

The idea is to take away some peak horsepower and torque at higher revs and move it to the bottom and mid-range, to make these bikes and their engines more usable at sensible speeds vs their donors.

Depending on the engine or manufacturer there were very many ways to achieve this to varying levels of success.

If comparing dyno charts, often the ‘de-tuned’ engine bikes just made less power and torque everywhere in the rev range.

What actually made these engines more responsive in the ‘mid-range’ simply was lower gearing.

The MT-10 makes an impressive 141 horsepower at 11500 rpm. While down around 40 horsepower vs the R1, the MT-10 is much more impressive where it matters most.

All credit to Yamaha though, as the MT-10 makes considerably more power and torque than the Yamaha R1 between 4500 and 8000 rpm, which is where many riders would mostly live on the tacho on faster roads and if overtaking on a highway.

We will do a detailed comparison between the two engines in a future piece.  Like the donor bike, there is a dip in power and torque at 6000 rpm where it then quickly recovers and then takes off with a nice kick as you drive through to 7000 rpm. 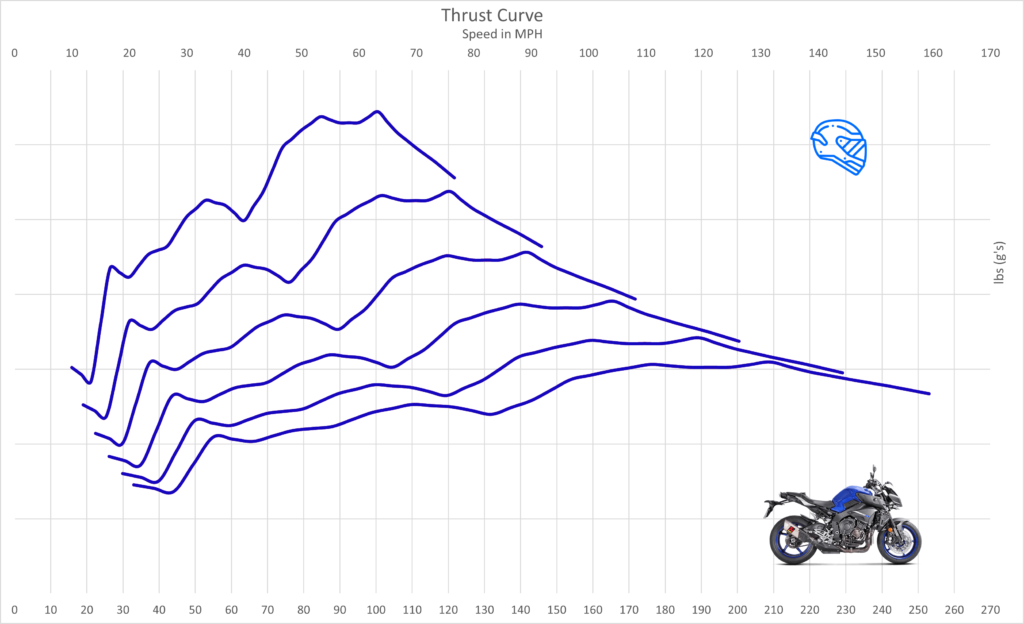 The MT-10 is an absolute wheelie machine, aided by more mid-range and lower gearing than the 2015 plus R1 it gets its engine from.

It is very hard to keep the wheel down but immensely fun at the same time. Even if the MT-10 is down on power compared to the R1, 140 horsepower is a significant amount, and a big step up from its little sister the MT-09.

It has something to do with engine character and low gearing that is more point squirt focused than low rpm fuel saving. But in saying that, 70 mph highway speed is still only 5100 rpm so far from frantic.

Like the smaller siblings, the MT-10 is a wheelie machine. Any big powerful lightweight motorcycle will always struggle to put its power down so 0-60 mph times can vary greatly and really depends on the rider skill.

The big MT-10 manages 0-60 mph in on;y 3.08 seconds which is slightly slower than the MT-09. Both are equally hard to launch and took many attempts to even get close.

This does not mean that the MT-10 is slower to 60, just during this test.

Any motorcycle that scores under 6 seconds to 100 mph is rapid fast, but the MT-10 could be faster yet but is always battling and thus limited by its mad wheelies.

They say you can only use around 70 hp to launch a bike to 60 mph effectively that isn’t lowered or stretched.

This MT-10 must have had some ECU fettling as they are not normally this fast, topping out at 150 mph. Also, the quarter-mile terminal speed is very high too.

For best acceleration, ETs shifting around 11500 rpm is the best option. This will be different for US spec models those heavily restricted models’ power starts to tail off at around 10500 rpm, though if your bike has a flashed ECU your MT-10 will keep making power till redline just like the Euro-spec models.

Like with any naked bike, if you want to achieve good acceleration times above 130 mph you have made yourself exceedingly small, chin completely on the tank, knees, and elbows as close to you as possible.

That is why we see some wildly different times when testing naked bikes, as also a headwind can kill your top-end acceleration times too, and more so than fully faired bikes.

The MT-10 is very fast and matches Superbikes up to 100 mph. It will be interesting to compare to the MT-10’s class competitors such as the S1000R, 1290 Super Duke, and Ducati Streetfighter V4. 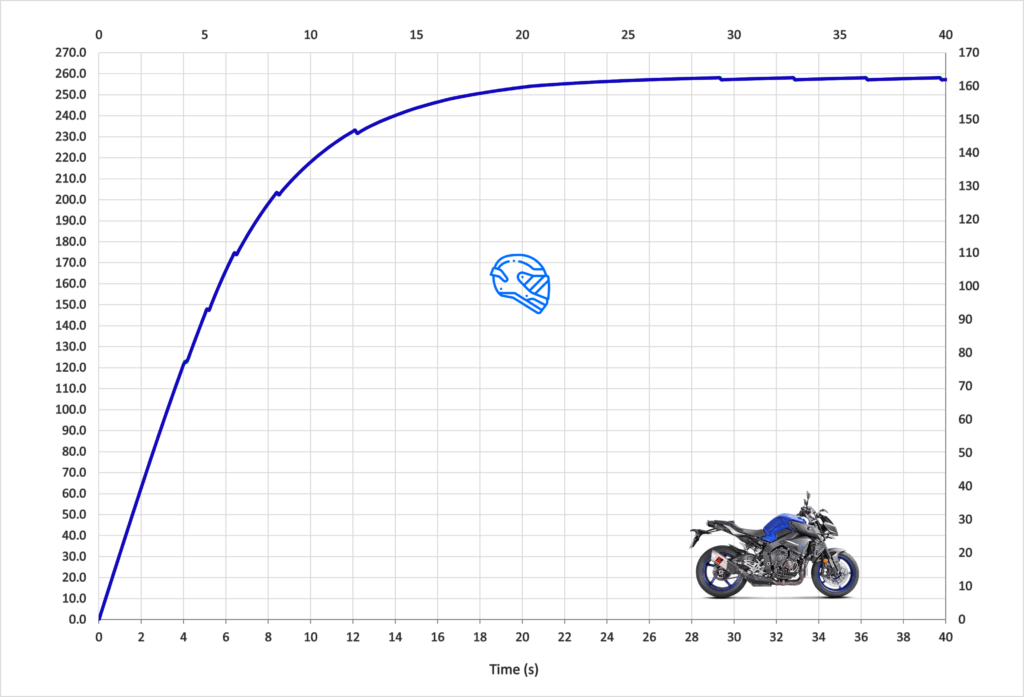