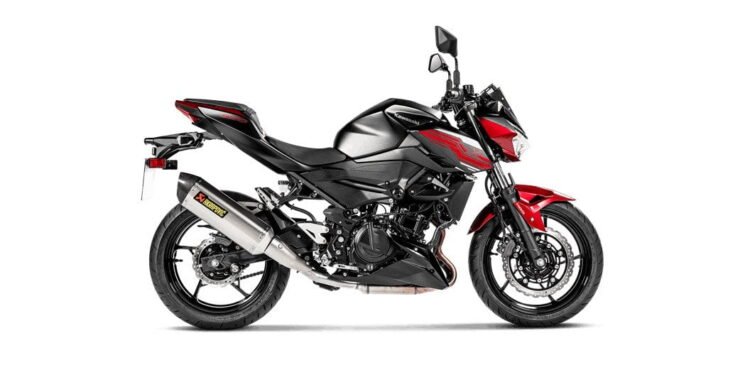 There are plenty of Naked variants of their fully faired counterparts. The Z400 is one of many and is the naked version of the awesome Ninja 400.

It’s up against the 390 Duke, CB500, and MT-03 as well as its siblings the Z250 and 300 which are all naked learner bikes that compete in a very competitive market.

Sharing the same chassis and wheels as the Ninja 400 and is powered by the same very capable 399 cc parallel twin that makes an impressive claimed 48 horsepower at 11000 rpm.

The Z400 is a rorty naked with great performance that is designed to appeal to new riders wanting a cheap but high-performance learner motorcycle that offers a little more street practicality versus sportier and fully faired motorcycles. 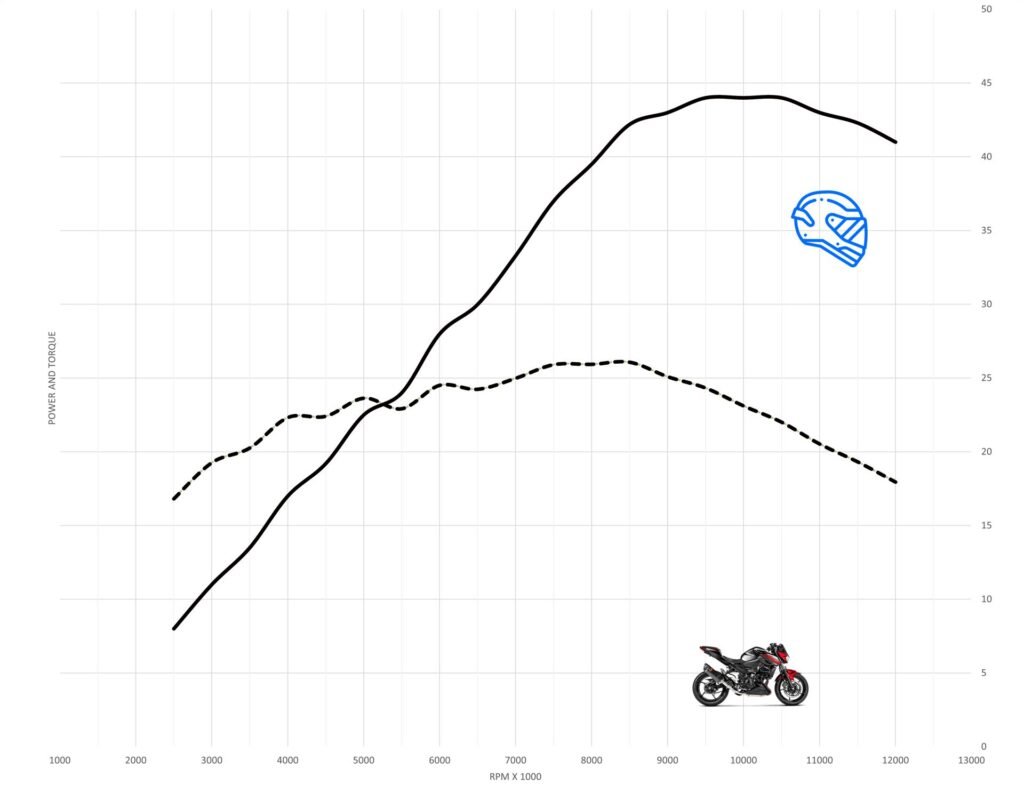 The Z400 engine is class-leading and like its Ninja 400 sister, it packs a good punch and offers particularly good performance considering its small sub-400 capacity.

It’s the exact same 399 cc parallel twin cylinder engine and not detuned like many other naked bikes that share an engine from their sportier fully-faired brethren.

While it has the same engine as the Ninja 400 when put on the dyno made a little bit less at 43 horsepower power at 11000 rpm.

Torque was also a little bit down and produced at lower rpm making 25 ft/lb at 7500 rpm. They are impressive numbers regardless and I would put the differences down to variants between models and conditions on the day.

Besides our Ninja 400 did have an exhaust so a little cheater.

The power is delivered across a broad range and really gets going above 7000 rpm. 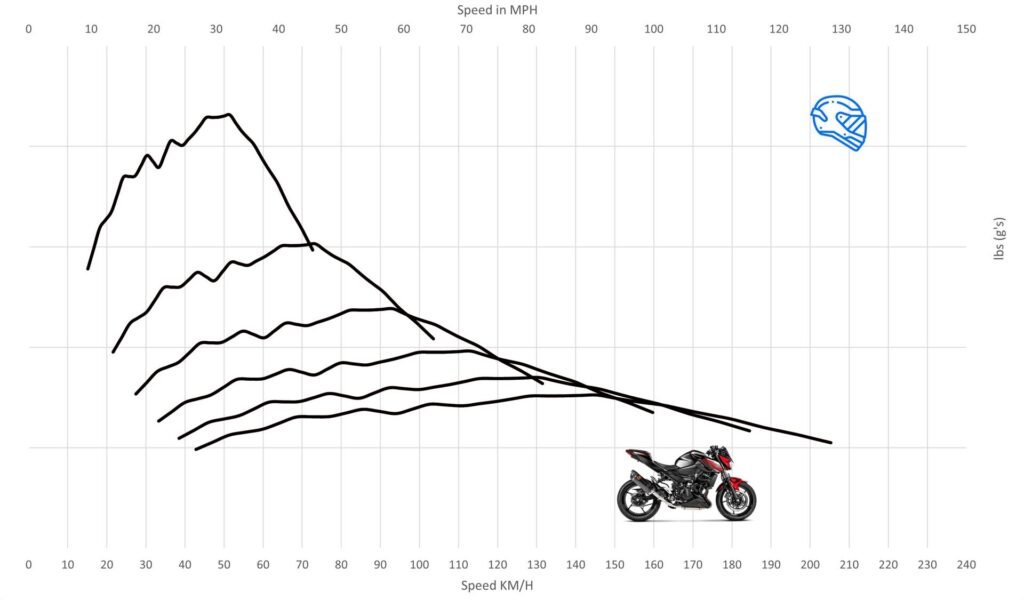 Like the Ninja, the power does flatten off at around 9500 rpm and all the way to 12500 rpm. Though this is great for tight country roads and the track where you can hold onto a gear a little longer than you would compare to competitors.

Low down the Z400 has a very good response making good torque from 4000 rpm onward as it screams all the way to 12500 rpm plus.

Below 4000 rpm it could be better but due to the size of the engine and the low gearing, you wouldn’t find your rpm there often and only likely in first and second gear and in slow-moving traffic which is more than enough to accelerate quickly.

Though if in higher gears it responds best if above 4000 rpm but to keep your friends either in sight or behind you like all smaller engines they respond well to revs and the Z400 is no different where from 700 rpm up it is very accelerative and responsive leaving most of its competitors behind.

The Ninja 400 really impressed with its times and leads the class of sub 500 cc motorcycles that we have tested and bettered even the CBR500R.

The Z400 does not disappoint, though it does trail the Ninja by a bit.

These small engine entry-level learner motorcycles never cease to amaze me with their impressive ETs with the leaders in the class all doing sub-five seconds 0-60 mph and 0-100 km/h times.

The Z400 manages to beat the larger capacity and fully faired CBR500R by almost half a second as well as duffing up the YZF-R3 but trails one of its closest rivals the 390 Duke by two tenths.

The quarter mile is a metric that everyone is interested in and the Z400 does not disappoint in this regard with a standing quarter-mile time of only 13.34 with a terminal speed of 98 mph.

The Ninja 400 above 60 mph does walk away from the Z400 despite them both having the same engine and power. You can put much of this down to the fact that the Z400 is naked, and the Ninja is fully faired.

It was hard work getting these times. If you are used to riding big powerful motorcycles typically you slip the clutch pretty hard for good launches as aggressive dumps normally result in a bog or a wheelie.

You often get better results on smaller lower power motorcycles from a more aggressive slip/dump of the clutch to really fire it off the line which was the case with the Z400.

Being a naked bike the wind will really affect your times, as well if you do not get in an efficient tuck.

A good tuck versus a poor tuck had an approximate 1.4 seconds difference from 0-100 mph and shaved 4 mph off of the top speed. 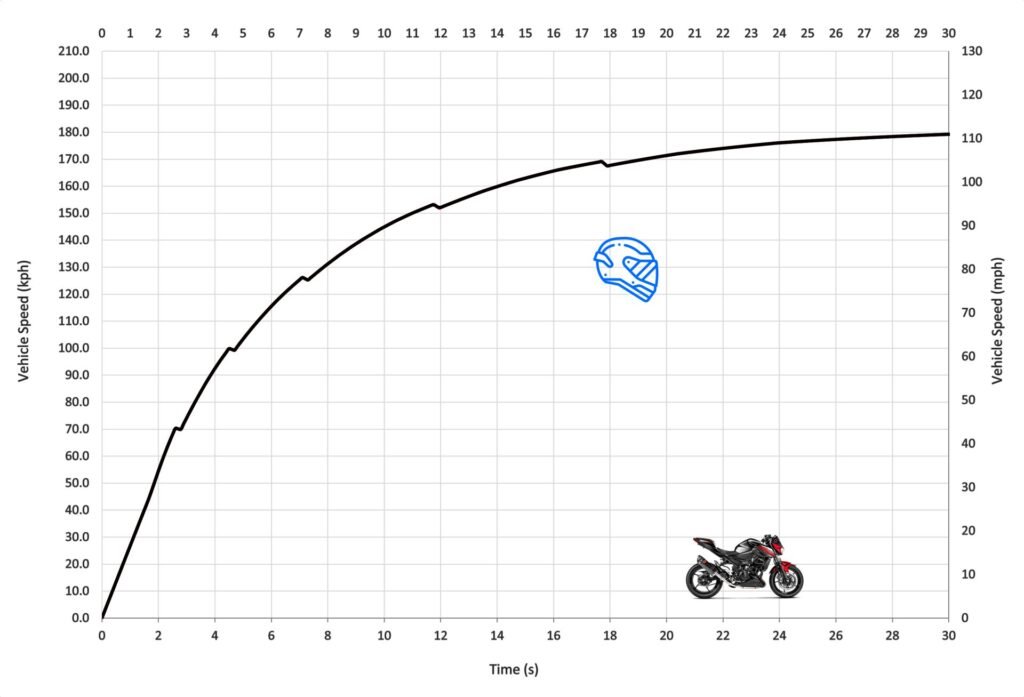 As per above you really need to tuck well and there is no point trying a top-speed run even into a mild headwind as 40 horsepower rapidly is consumed.

Luckily where we test despite often being very windy in the afternoon and evening, early morning there is often very little if zero wind which was the case when we went out to do our testing for acceleration and top speed.

It is still very impressive considering that we are talking about a 40-horsepower naked bike that will crack 100 mph plus even in non-favourable conditions.

We managed the top speed in fifth gear at around 11800 rpm.

Hooking sixth at least for us did not change the top speed as the rpm just dropped to around 10,600 rpm and stayed there and even lost a fraction of speed so we just stayed in fifth and got the best terminal of the day.

Your results may vary, though I can see more out of the Z400 if it could hold onto its power for longer. We have seen this engine respond very well to tuning, and with a tune that shifts the peak horsepower up closer to the rpm limiter will see a higher top speed.

Among your other learner-riding motorcycle friends if you chose the Z400 you will have no problem keeping up and will be one of the faster bikes in the pack.

You can even hang with larger and faster motorcycles such as the Z650 in all but the most balls-out max speed situations.

There is also more than enough power to sit with fast-moving highway traffic as well as having sufficient amounts of overtaking acceleration from 70 mph though these manoeuvres are best served if you use fourth gear but you can even use third if you really need to get a move on but the rpms will be really singing.

The Z400 is a great little performance bike that will have more than enough for the learner rider,