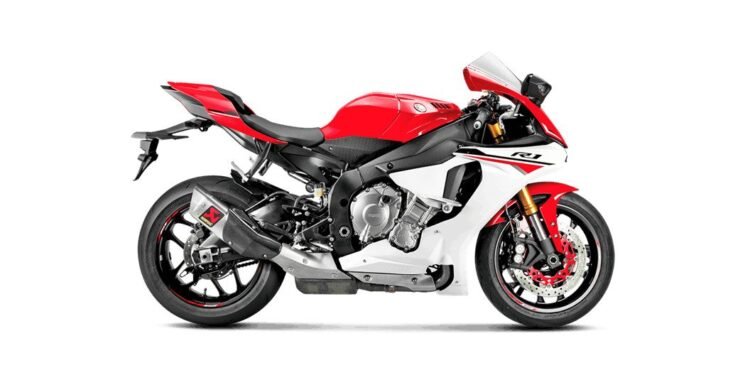 The Most Accelerative Yamaha R1 To Date

The 15-19 Yamaha YZF-R1 is the latest addition to Yamaha’s legendary R1 range, and no doubt the fastest motorcycle from the Hamamatsu factory to date. The R1 will be the first motorcycle that Motostatz will measure against the clock.

Like all motorcycles that we plan to test, the Yamaha YZF-R1 will have its acceleration measured from a standing start in 10 mph increments all the way to its maximum speed. 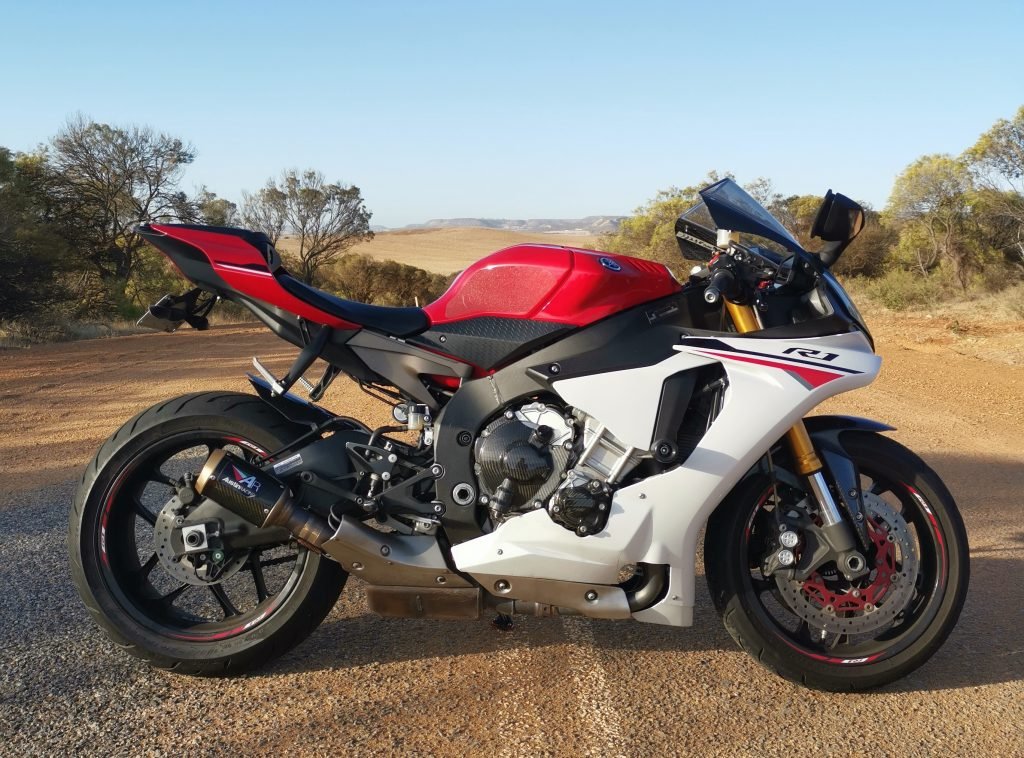 Litre motorcycles have been chasing big numbers with each new generation of machine one-upping the last in terms of peak power.

While we’ve seen models from all of the big Japanese factories lead the horsepower hierarchy at least once in the last 20 years, it has been BMW and their S1000RR which was released back in 2010 and has led the pack in terms of peak horsepower and straight-line acceleration.

It took Yamaha until 2015 to respond effectively as their 09-14 YZF-R1, although an amazing machine was lacking somewhat in terms of peak horsepower compared to the BMW’s S1000RR and lagged a little versus some of its competitors too especially in the US market where their emissions regulations are tougher with the 09-14 Yamaha YZF-R1 not fairing too well comparatively. 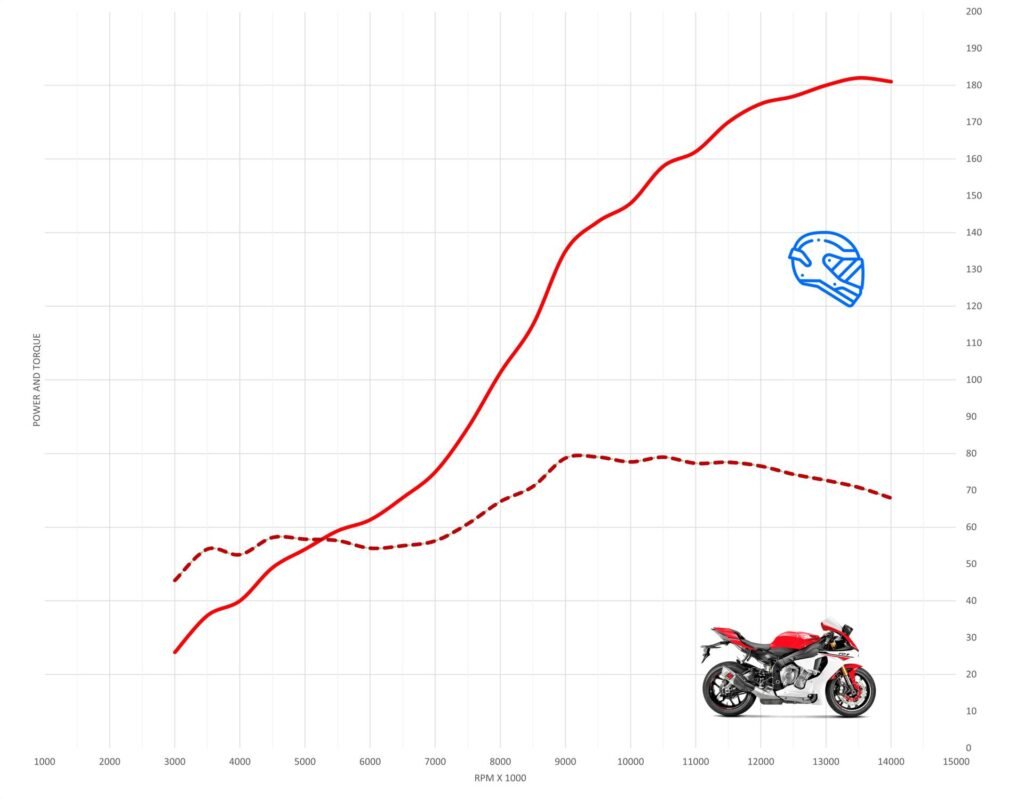 In 2015 Yamaha released the latest R1. Visually it was quite different from the family of very distinctive R1s it evolved from and took on much of its design inspiration from Rossi’s Yamaha M1 MotoGP bike.

MotoGP bikes are supposed to be prototypes with no road equivalents but you could argue that the R1 is the closest thing to a MotoGP bike on the road, perhaps along with the RSV4 and Panigale V4.

To bring the new R1’s motor in line with its competitors, Yamaha decided to opt for an even shorter stroke motor from that of its predecessor.

The shorter the stroke, the higher theoretically an engine and rev – torque multiplied by revs equal power,r and the R1 had lots of power, 197 at the crank to be precise!

The new motor revs to a giddy 14,300 rpm and makes a claimed 197 horsepower at the crank excluding the ram air effect.

There are no horsepower clams for ram air but we can expect between 5-7 horsepower at 180 mph!

The extremely short-stroke motor does have its downsides though as power and torque have been sacrificed below 9000 rpm and are particularly lethargic below 7,000 rpm if compared to rivals.

This can be mostly remedied though with a Decat exhaust and ECU flash or custom dyno tune and with the elimination of the servo motor that opens up one of the exhaust valves as revs rise.

It’s likely this whole in the power and torque curve is more to do with noise and emissions.

As per above the short stroke motor is not only to blame as tough emissions control also means in certain gears and at certain throttle openings, the R1’s performance is not 100% as to meet stringent new rules.

The US R1 variants that are specced for the Californian market missions’ standards can make as much as 10-20 horsepower less at the wheels compared to non-US spec R1s from Europe and Australia. 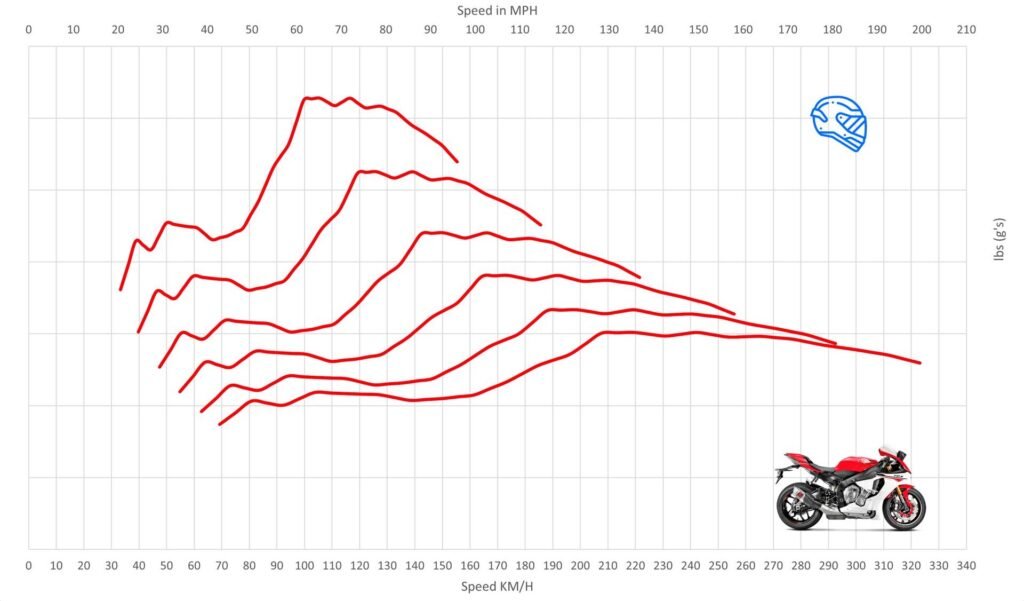 This lack of low-end torque is exemplified by Yamaha’s relatively high gearing.  Pretty much all R1s that came before, even the first of the short stroke motor R1s – the RN12 are stronger motors in the bottom end.

The current R1 is nowhere near as punchy from corner to corner on really slow twisty roads if rpm is below 7000 rpm though, to be honest, you probably do not need more. The R1’s motor is obviously most suited for track use with that almost perfectly smooth and flat torque curve from 9,000 rpm right to the rev limiter.

That’s a 5000 rpm power band that if you keep the tacho in, you’ll fly. The new R1 engine is fantastic but would need a little more down low to make it a class leader but up in the top end of the rpm range it flies and eats up gears almost unmatched. 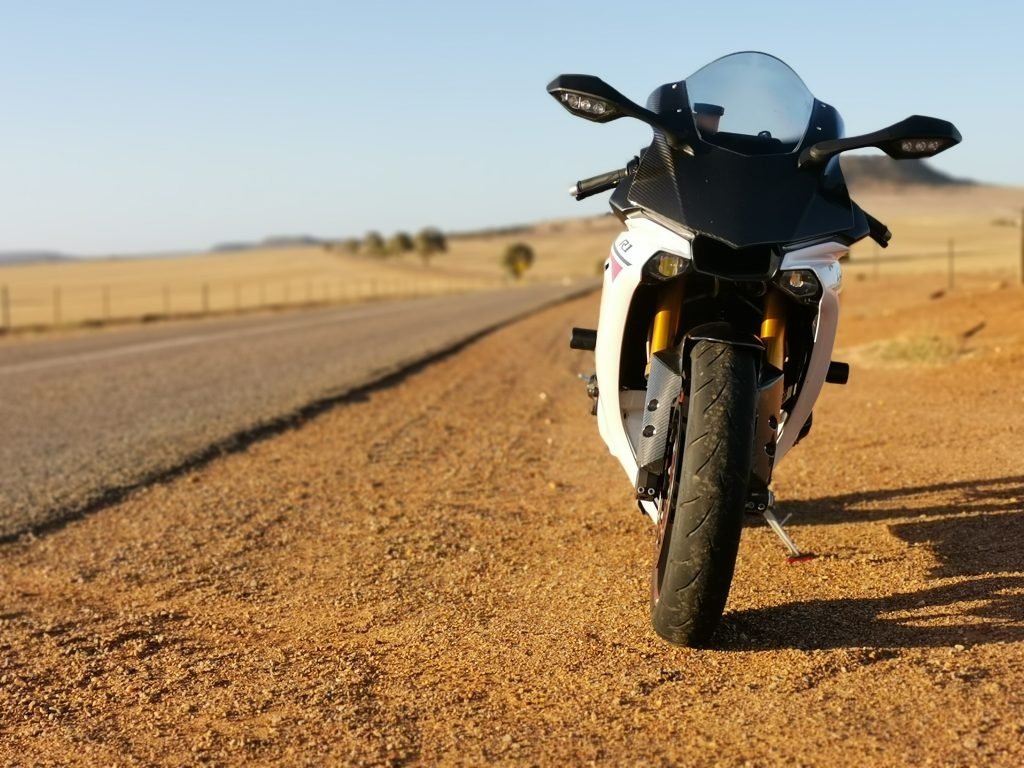 The latest R1 is a litre motorcycle so it goes without saying that it is ballistic.

The YZF-R1 has long gearing and is a little hard to launch and this example had a very grabby and juddery clutch which you can feel through the clutch lever, though despite this it still cracks 0-60 mph in an impressive 3.10 seconds.

100 mph comes up in 5.73 seconds just before hooking second gear.

My times were similar with or without wheelie control, though I was a little bit more consistent with it on.

With wheelie control on the electronics will allow the front wheel to hover a few centimetres above the ground in first and second and sometimes in third gear too.

You must be careful as you can literally have the wheel not touch the ground up to and over 100 mph which results in it not being possible to steer the bike and keep it straight.

The R1 likes to veer off to either left or right which is probably caused by you contorting your body as you hold on tight.

So you often have to back off the throttle for a fraction of the second to sit the front back down on the ground, then point it straight and resume.

Launching any big 1000 cc bike with decent wheelie control is very exhilarating as the clever electronics do fill in some of the gaps you may have in your ability and constancy making you feel like a proper racer as you charge hard through the gears!

Keep feeding it gears and 0-150 mph is cracked in under 10 seconds at 9.56 which is no mean feat and only needs fourth gear to achieve that speed.

0-180 mph which really is the new benchmark for litre Superbikes arrives in only 16.28 seconds while that last 11 mph on to the Yamaha R1’s top speed of 191 mph takes around 34 seconds.

Grabby clutch and wheelies aside it is pretty hard to get good times out of the R1 as it eats up gears so fast that it is very easy to hit the limiter in the first three gears not helped by the tachometer numbers being small so it is better to put that dash wallpaper into race mode and you can catch the change much easier.

A flash and de-cat exhaust will see this bike doing a true 200 mph I’m sure.

It’s an impressive accelerative display from the R1, and we can’t wait to compare the Yamaha R1’s acceleration numbers with its rivals such as the H2R

If you are a car person reading this, to give you an idea of where the R1 is at in terms so acceleration, we are talking McLaren 720S, P1 and even the Porsche 918 and Ferrari La Ferrari territory.

It’s a serious weapon. At least from a dig, the new McLaren 765LT would have the legs on the R1 though. 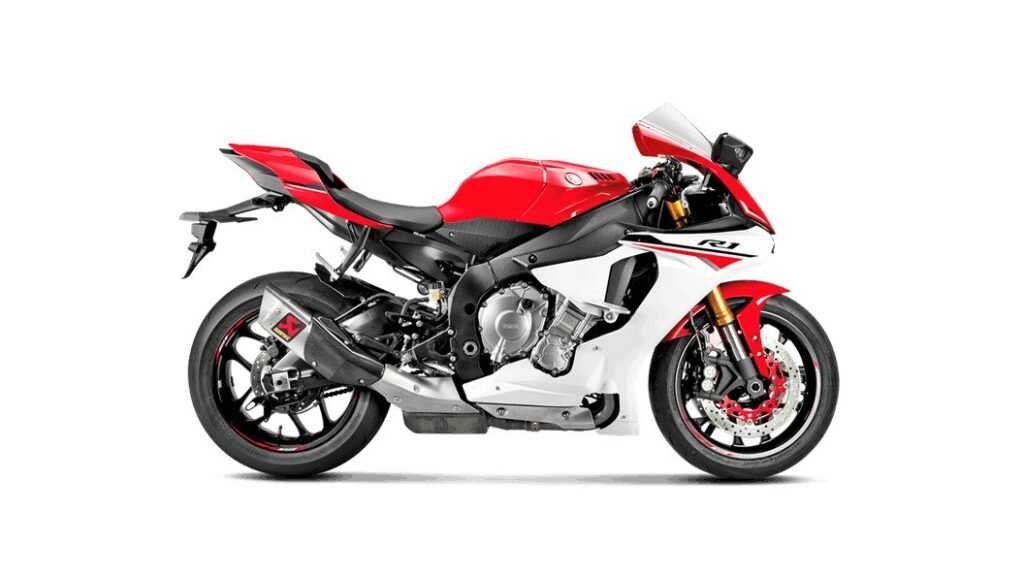 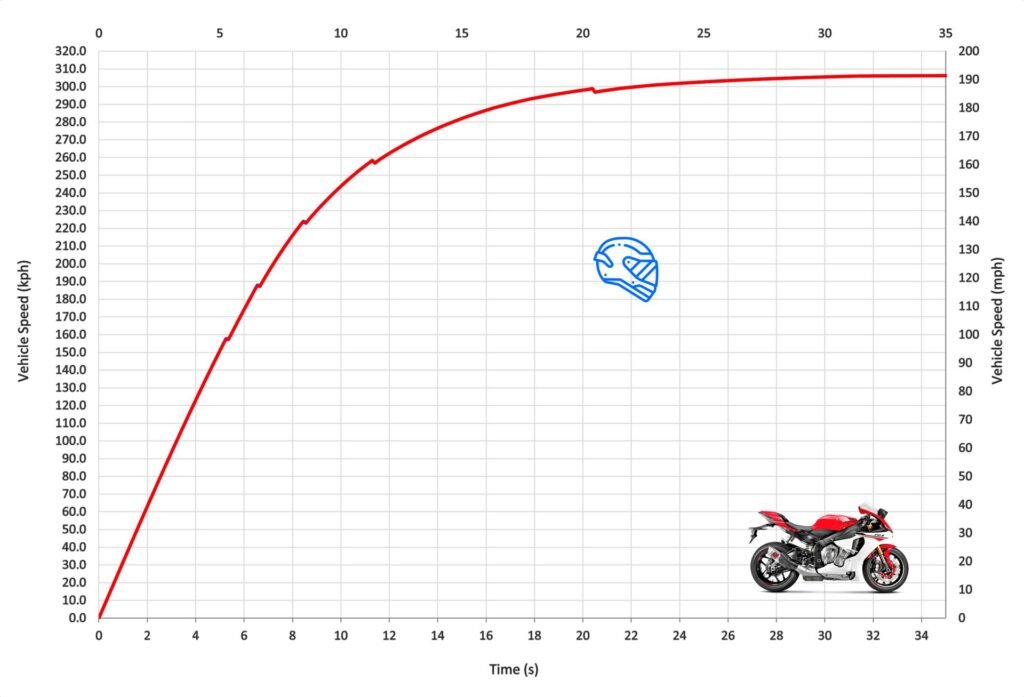