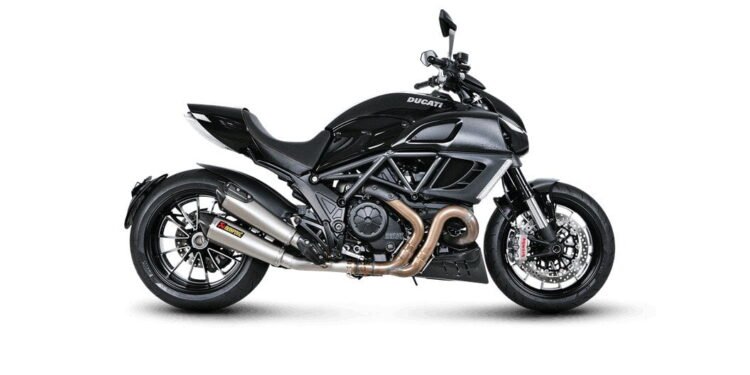 The Ducati Diavel was launched in 2011 and is a motorcycle that is hard to categorise. It is a kind of cruiser and naked sportbike hybrid.

It initially was not received well by the motorcycle community and press and especially the Ducati purists who were shocked that Ducati would dare to design manufacture and sell a cruiser bike.

Ducati as a brand has been primarily very Superbike focused with a few machines that buck the norm such as the Monster series though the fact that they were willing to diversify into the cruiser market was quite surprising to many.

Ducati is a business after all, and they need to think of the bottom line like any business.

Just like many motorcycle brands, Ducati witnessed a shift in the market where consumers were turning their backs on Superbikes and looking for more practical alternatives that still offered comparable performance but in a much more practical package. Ducati saw an opening in the market and filled it.

The Diavel certainly shook up the cruiser market that is predominately dominated by overweight and low-powered Harley Davidson.

To be fair to HD the Diavel cannot really be compared to any Harley other than perhaps the V-Rod which you could argue that Ducati got their idea for the Diavel from. Both are similar looking in their stance with cruiser-like ergonomics but brutish dragster performance and handling that is not cruiser-like. 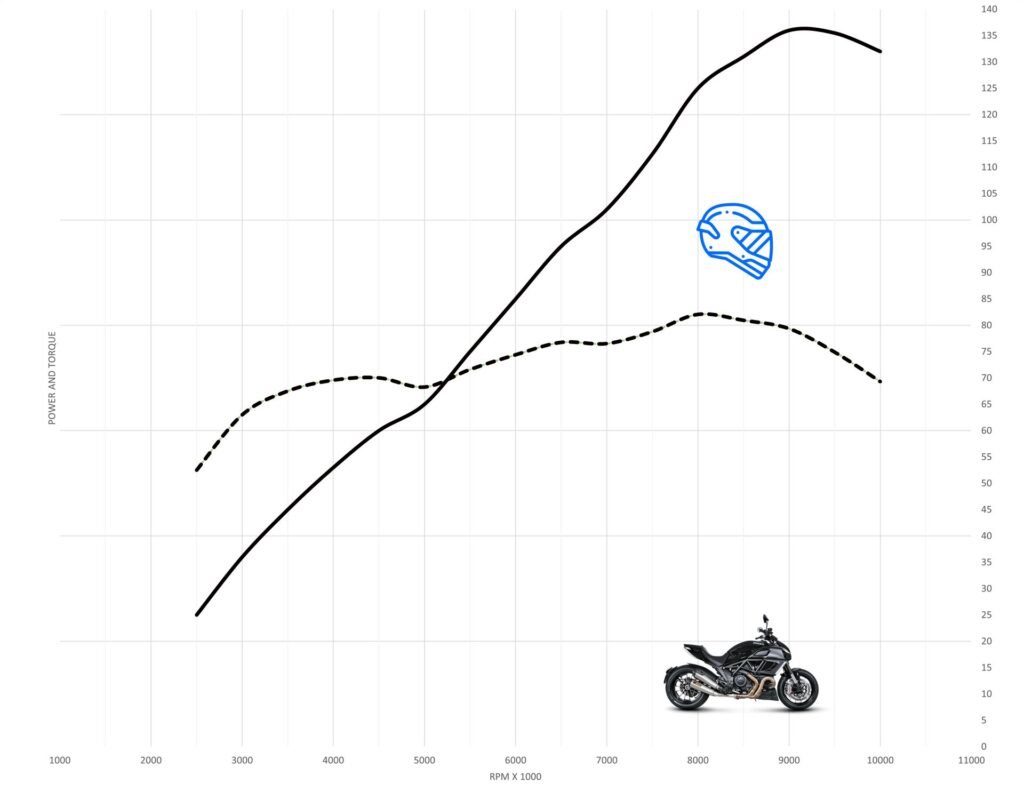 The Diavel is powered by a 1198 cc 90 L-Twin Testastretta engine taken directly from the ballistic Ducati 1198 which at the time was Ducati’s flagship Superbike. The engine is in a lower state of tune with around 15-20 horsepower off at the top but re-tuned to provide a little more in the mid and bottom rpm which it does.

Individual gears ratios are the same, but Ducati opted to add five teeth to the rear sprocket which would reduce top speed at 10000 rpm by around 20 mph over the 1198. 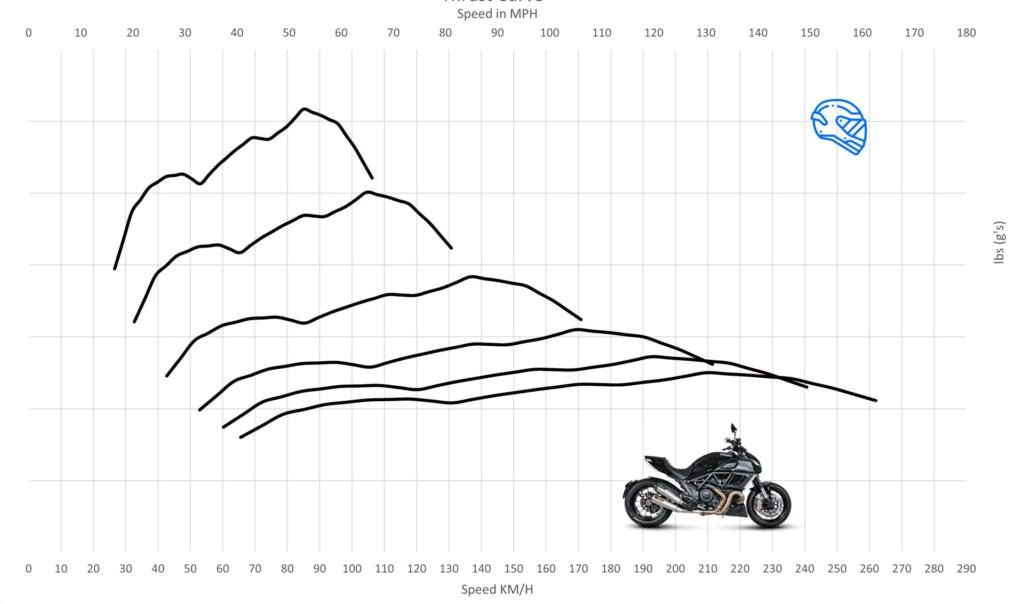 These changes are to account for the Diavel’s extra girth and lower overall power versus 1198 as well as wanting to make the Diavel more responsive accelerative in-gear and in real-world situations.

It’s a great engine and despite the heavy weight of the Diavel it is very explosive in the lower gears and picks up even more instantly than 1198.

They probably should have called the Diavel the Dragster seeing how it moves off of the line, but that name has been used a fair bit in the motorcycle world.

Though “like the Devil’ is sufficient as the Diavel does have a ‘wicked’ turn of speed and will get you into trouble real fast.

There are not many Superbikes that will touch a Diavel from the 0-60 mph sprint. While they theoretically can match the Diavel, in practice Superbikes are much harder to get off the line due to their insane power, long gears, low weight, and short wheelbases. While Superbikes also have a much higher center of gravity too.

As a result, most of the latest 1000 cc plus Superbikes manage the 0-60 mph spring between 3 and 3 .3 seconds though there are exceptions if the stars align.

The Diavel on the other hand in long and low with a huge 240-width tyre. Motorcycles shaped like the Diavel if they make good power are often weapons from a dig. And the Diavel being true to form manages a 0-60 mph in 2.7 seconds which it achieves in first gear.

The Diavel is a motorcycle that will wheelie and wheel spin at the same time when launching hard.

It’s impressive and incredibly fun trying to hold on to this rocket as you fire it off of the line. Ducati’s DTC is best not used if you want the best ET and even though a 0-60 mph in 2.7 seconds is impressive the Diavel is capable of slightly better times.

It is pretty easy to get off of the line, though you just have to get used to dumping the clutch march harder than you would on a Superbike as the Diavel is much less likely to flip. Instead, just flying forward spinning and power wheeling.

Due to the Diavels long and low-slung dimensions you can be consistent and score flat 3 seconds 0-60 mph times all day long and without much effort.  For reference, the Diavel’s 0-100 km/h time is 2.89 seconds.

The Diavel is still charging hard and hits 100 mph in 5.57 seconds which is 1000 cc Superbike territory and achieves this in 3rd gear. 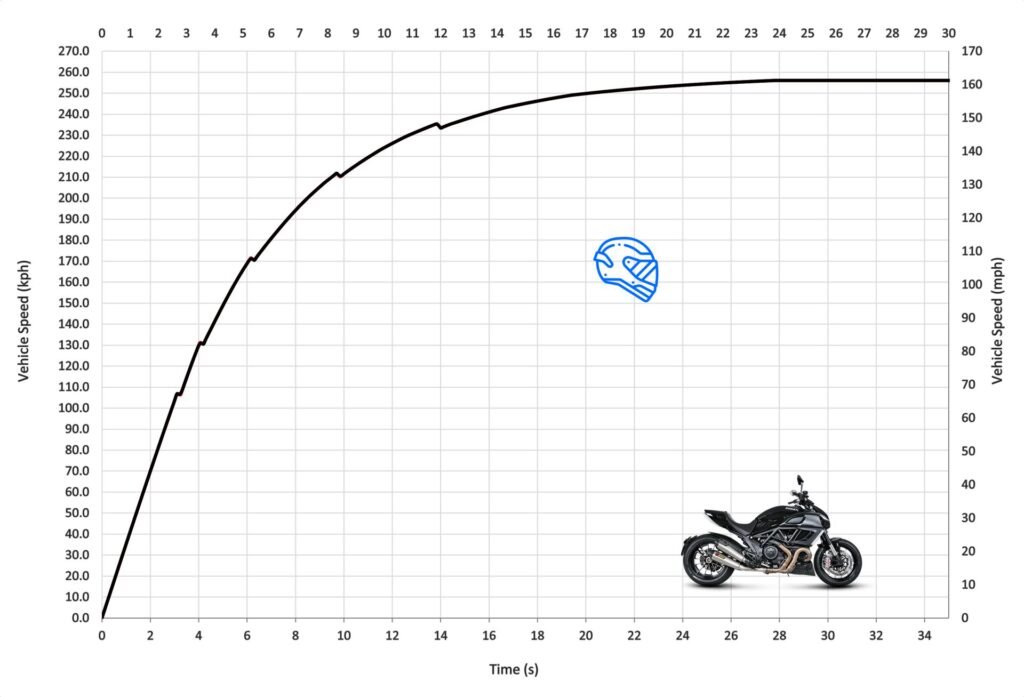 If the Diavel could hit 100 mph in 2nd it’d be 0.2 quicker. The Diavel can also accelerate from 0-200 km/h in 8.47 seconds which is a metric often used by car manufacturers and is a time that matches or beats many high-power cars.

I did say the Diavel was a drag bike, and it does very well on the quarter mile managing a 10.46 @ 133 mph which matches many Superbikes of the last 20 years albeit a slower terminal speed as it crosses the line.

The Dragy 60-130 is accomplished in 6.62 seconds which makes it a little quicker than the fastest 600 cc Supersport bikes.

Above 130 mph the Diavel’s aerodynamics really starts to hurt it, not to mention the lack of any meaningful wind protection for the rider but still manages a 0-150 mph time 16.20 seconds.

Though you really must work on your tuck and get as flat as possible otherwise you can add 2-3 seconds to that time quite easily. A strong headwind will kill the top speed.

For best acceleration ET’s the Diavel is not fussy when you change up so you can pretty much change gears between 9500 and 10000 rpm and you’ll get consistent times.

The Diavel is not about top speed but will still get you up to a real 159 mph which is a good top speed by any standard.

Though I’m not sure you’d want to as you must be prepared and committed to putting yourself in an uncomfortable tuck while the wind tears your helmet from your head.

A more realistic top speed, if you were to blast through the gears, would be 150 mph for most.  An aftermarket screen is advisable and would help get a little extra out of the Diavel.

Overall the Ducati Diavel’s outright acceleration is very similar to a Superport 600 such as the CBR600RR or YZF-R6 though you would almost always beat any 600 from a dig. Despite being down on power 600s can keep with the Diavel at higher speed as they have much better aerodynamics and some of them might just pip the Diavel at the top.

Despite the outright performance being 600-like, in all situations, the Diavel feels much faster than a 600 simply because it has a bigger engine with low gearing and offers instant drive everywhere in the lower gears while on most 600s you must be 9000 rpm plus to find their performance, while the Diavel will pull hard from as little as 3000 rpm.

The Diavel is a weapon with a great engine and performance.