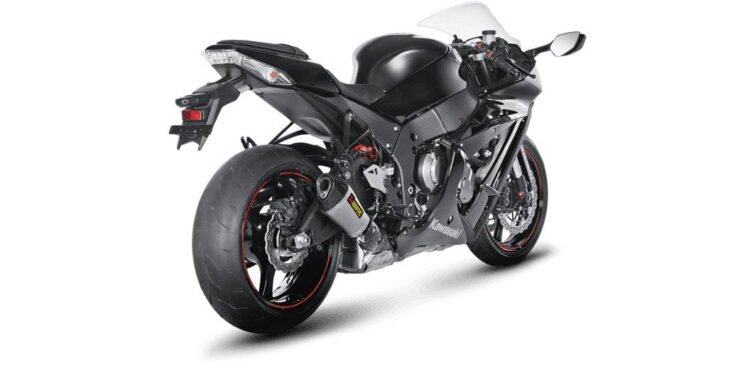 Kawasaki’s gen 4 ZX-10R was introduced back in 2011 and was a response to the dominance of the BMW S1000RR that came the year before.

The 08-10 ZX-10R it had replaced was not the complete package but arguably had the fastest engine of any of the Japanese motorcycles until the Bavarian-built BMW S1000RR trumped it.

Kawasaki struck back with the 2011 ZX-10R which was the most powerful ZX-10R to date making a claimed 197.3bhp horsepower at the crank which was a figure that matched the S1000RR on paper but was often down a little when rear wheel horsepower was measured on a dyno.

ZX-10R’s always had great engines and I am not entirely sure that beating the S1000RR on paper was really the goal, with Kawasaki perhaps more focused on creating a motorcycle that had a great balance between engine performance and chassis performance; criticisms that were levied at previous ZX-10R’s by the motorcycle press of the time.

ZX-10Rs were always more engine than chassis but they were wildly fast and developed a cult following largely due to the original Gen 1 of 2004.

The gen 4 2011 Kawasaki ZX-10R was indeed a great package and platform as this very motorcycle and revised variants of it have since gone on to win 7 and all but one World Superbike Championships from 2013 till now. 2014 was the only year that the ZX-10R did not win, losing that championship to Max Biaggi on the Aprilia RSV4. 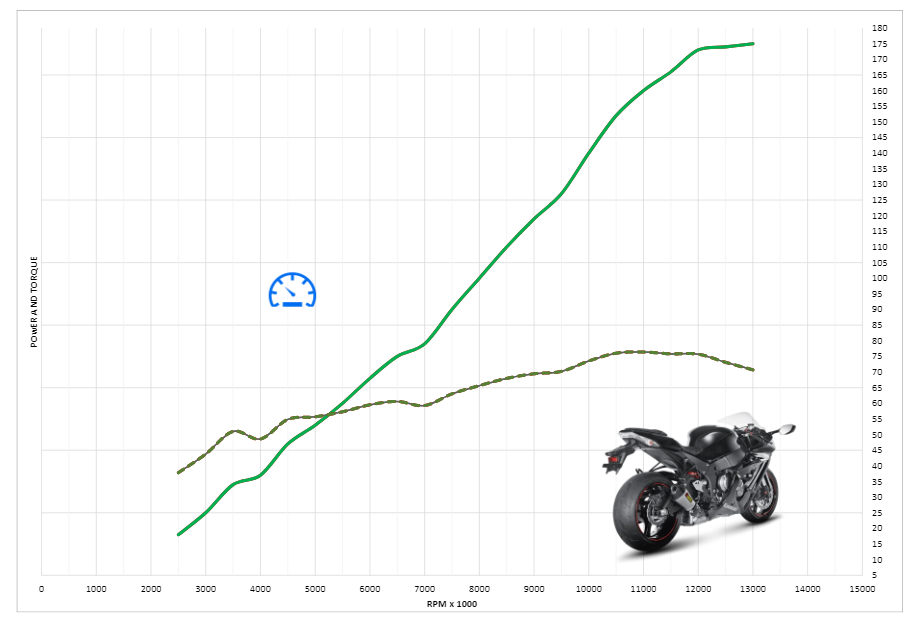 As mentioned, Kawasaki’s ZX-10R was the most powerful ZX-10R yet, though to extract close to 200 crank horsepower while sticking with the 76.0 mm × 55.0 mm bore and stroke that had been present since the first 10R in 2004 they had to look elsewhere.

Kawasaki’s marginal gains over the 08-10 model came mainly via different throttle bodies and a higher compression ratio of 13.0:1 vs the outgoing models’ 12.9:1.

Also, a more aggressive cam profile with said cams that are made from Chromoly steel. (formerly cast iron)

While other changes to the engine include completely overhauled intake and exhaust porting; lighter pistons; lower-tension rings; and the crankshaft that has been re-positioned for better mass centralization.

Depending on dynos these tweaks saw an extra 5-7 at the top end but the engine made less power and torque right throughout the rev range if we compare back-to-back with the 08-10 which is also a variant that had less in the mid and bottom ranges than the Gen 1 and Gen 2 ZX-10R’s before it.

The trend with each replacement ZX-10R seems to be robbing Peter to pay Paul. As with each new machine they seem to lose a little at the bottom and midrange and gain up top.

It produces a very impressive peak figure but it’s ‘peaky’ as it makes 170 plus only within a 1000 rpm range, which is narrower than other competitors even if they make less power.

ZX-10Rs have always had exceptionally long gearing and some would argue unnecessarily long but Kawasaki was likely gearing the ZX-10R for long sweeping racetracks and not the road. Gearing for the 2011 ZX-10R is remarkably like the outgoing model with some slight variants between cogs. 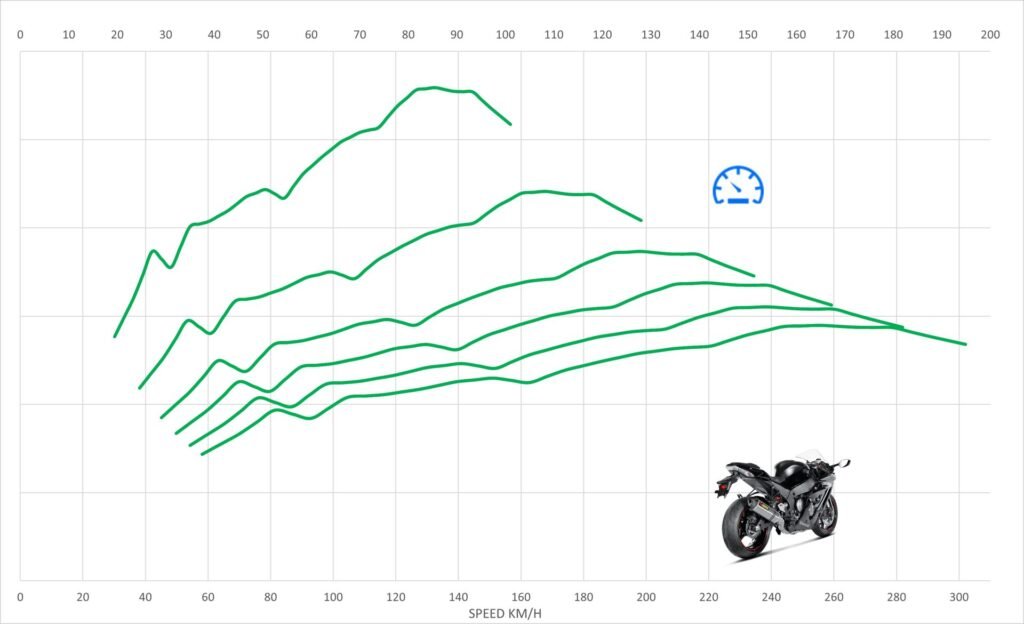 Some longer and some shorter. Either way, gearing is still probably too long for this engine’s character and overall capability as stock.

Being very long geared and by 1000 cc Superbike standards and having a weak bottom and midrange, and a very linear build-up in power kind of makes the 2011 ZX-10R feel slow until the revs wind up to and past 10,000 rpm.

The ZX-10R is very much like a big 600 cc sport bike with an elastic powerband but significantly faster.

Obviously, in isolation, it is rapid as hell but pretty much any litrebike the last 20 years stomps it below 10,000 rpm. Even the original ZX-9R would surprise it in certain gears at certain rpm and that bike only makes 125 horsepower and is only 900 cc

The 2011 ZX-10R engine is a riser though and responds extremely well to a full exhaust and tune, which pretty much brings it level with many other motorcycles in the bottom and midrange while also adding a good chunk of horsepower at peak.

As stock though the engine (if not thrashing it) is a little lacklustre comparatively and especially if getting straight off a rival such as any variant of the GSX-R1000 which all have amazing and explosive engines. 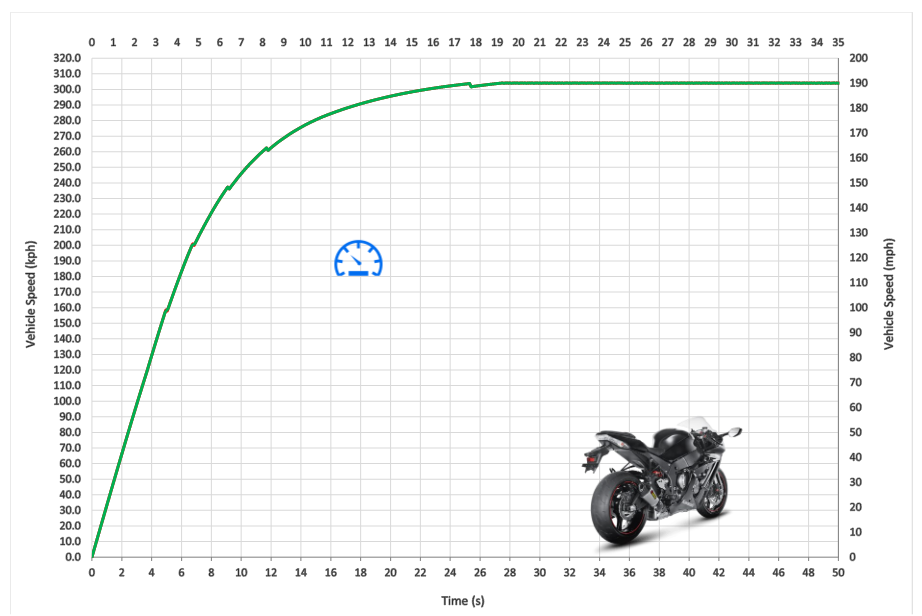 After the above, you’d think that the ZX-10R is slow, but rest assured it is a ballistic motorcycle and faster than any ZX-10R before, you just have to work the engine a little harder to get that extra bit of fast out of it.

It is hard to get modern litrebikes off the line as they have so much power and are so light. If a Superbike could put all its power to the ground in first gear, we would be seeing 0-60 mph times in under 2 seconds but even with electronics and anti-wheelie, it is still not possible as the centre of gravity for sports bikes is too high and wheelbase too short.

A simple act of lowering/strapping would see almost any litrebike hit exceptionally low 2s to 60 mph but as stock mostly the best times we see are high two second times but normally low three seconds.

The ZX-10R also has too much power to put down but unlike many other similar power liter bikes its long gearing and lack of bottom and midrange power helps it get off the line consistently and easier than most.

While it will obviously wheelie in first gear, unlike some of its rivals it does not frantically try to wheelie with every mm of throttle input so is a little easier to lay its power down consistently.

A time that is particularly good, as anything under 10 seconds is next level.

Lowering the gearing (if it did not cause unnecessary wheelies) would yield better times for the ZX-10R.

In saying that, first gear could remain the same, but there is a big gap between first and second, and second/third so bringing them closer together could have been a better choice, something I believe Kawasaki did with the 2015 revision of the ZX-10R if my memory serves me correct.

The Dragy 60-130 mph benchmark time is achieved in a very impressive 4.50 seconds and is achieved from starting in first gear which is hard on some other litrebikes because of their tendency to wheelie aggressively.

US spec models which are 15-20 hp down due to more stringent emission restrictions will do the 60-130 mph time in over 5 seconds.

The top speed of the ZX-10R is a very respectable 188.9 mph which is pretty much in line with the 300 km/h gentleman agreement.

On the road, due to the long gearing and mediocre mid and bottom end, the ZX-10R is not as responsive as its competitors. So being in the wrong gear will have other bikes pull bus lengths out of you.

Though get the engine singing and you will beat or be with most things on the road.

Add a few teeth to the rear or drop a few at the front, flash, and install a full exhaust system completely transforms this motorcycle and puts it right up there even with the latest bikes as it becomes a real weapon. Fettled 2011 ZX-10Rs are no joke.