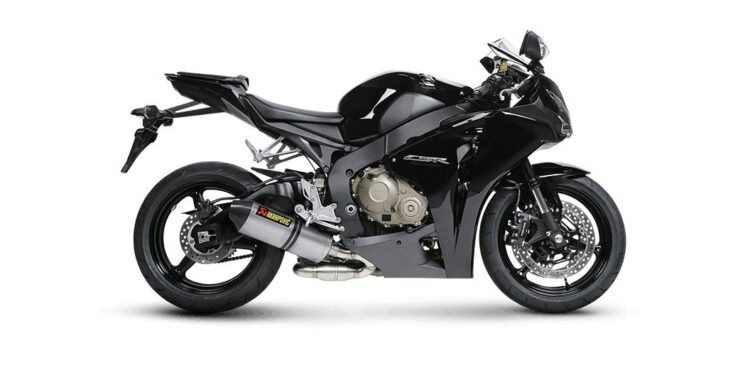 Below, we take a look at Honda’s 2008-2001 CBR1000RRs’ dyno curve, in-gear and outright acceleration through the gears, along with its top speed. 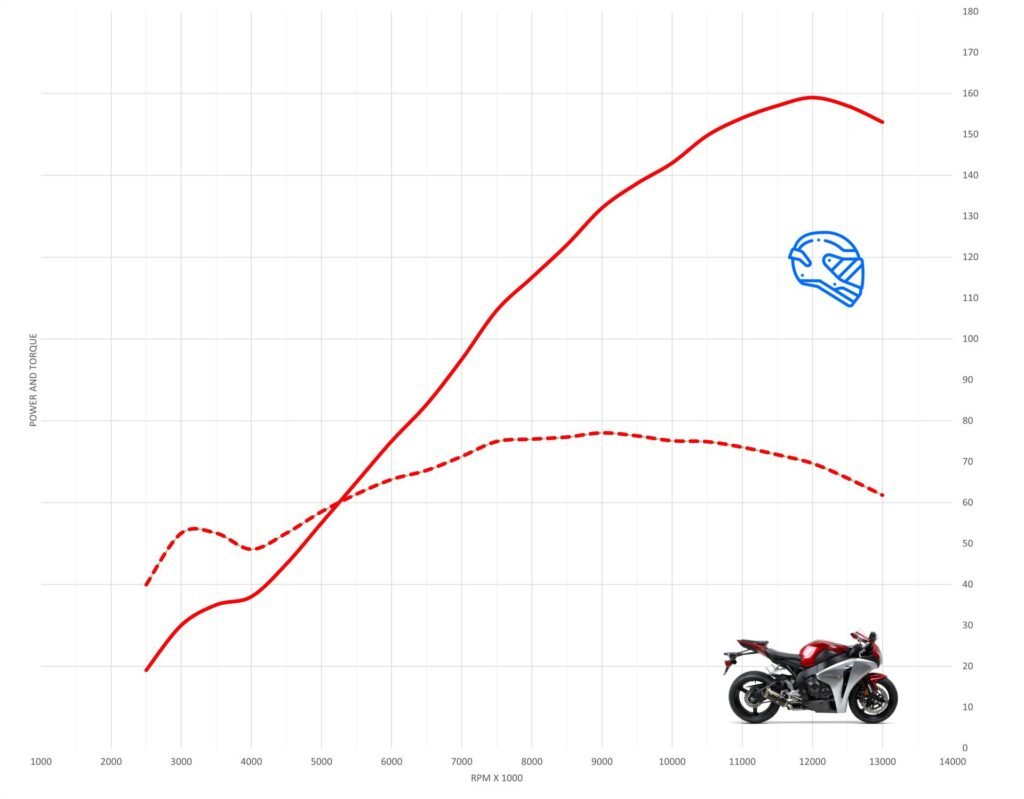 Honda’s 08-11 CBR1000RR engine is a 998 cc incline four that at the time was Honda’s most powerful production motorcycle with a claimed 175 crank horsepower at 12500 rpm.

The former generally made around 145 horsepower due to more stringent emissions regulations in the US, with power flattening off drastically from around 10000 rpm.

Peak torque was one of the best in the litre class of the day with a solid 78 ft/lb at 8000 rpm, though it was not so much the peak but the spread that was impressive. 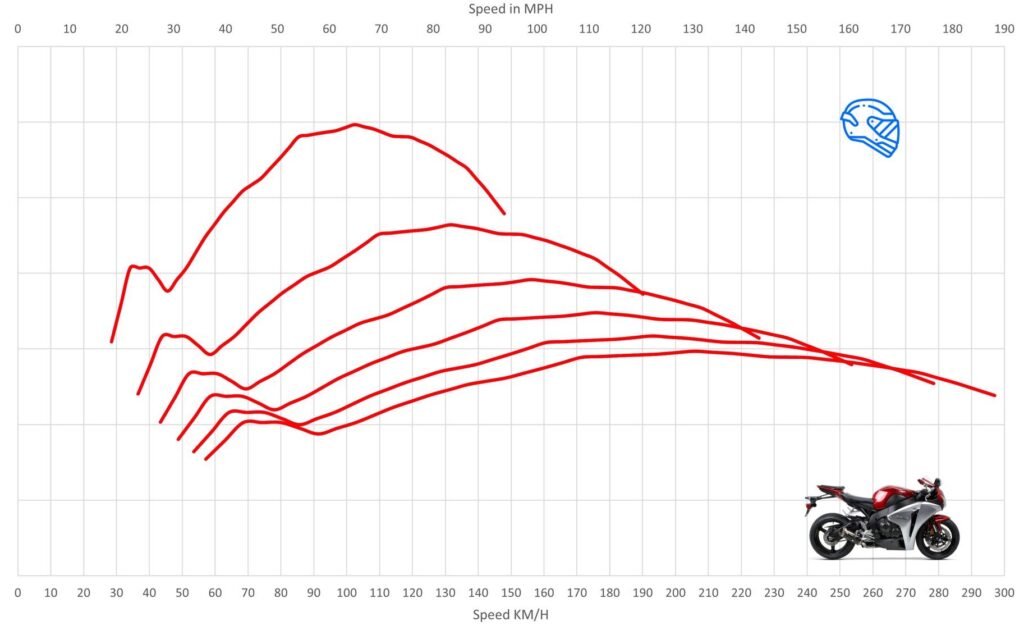 Other motorcycles of the time due to the pursuit of power sacrificed their mid and bottom-ends with perhaps the exception of the Suzuki GSX-R1000, though the 08-11 CBR1000RR easily had the best overall spread of power and torque right where you needed it for fast road riding.

This made the CBR1000RR one of the better motorcycles when it came to initial in-gear roll-on acceleration.

The only weakness of the engine would be right off the bottom where there is a flat spot at 4000 rpm.

This flat spot is easily remedied with an exhaust and tune which when done made the 08-11 CBR1000RR one of the best Superbike engines for the road despite it losing out right at the top to some competitors.

Still to this day except for the current GSX-R1000 and S1000RR which both have clever VVT systems, the 08-10 CBR1000RR’s midrange still punches exceptionally well and more so than many other newer Superbikes. 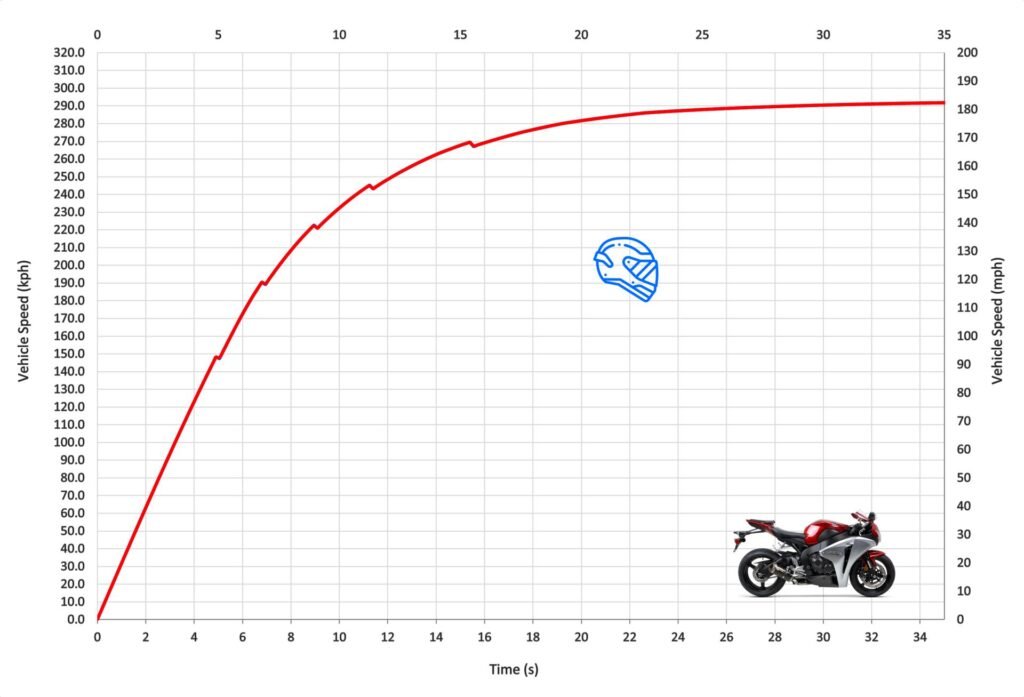 While we have seen many advancements in the last decade, litre Superbikes while faster are not massively ahead of older superbikes.

This is certainly the case from a dig and through the quarter mile as demonstrated below and it is only past 150 mph where the newer stuff asserts itself.

There is zero wheelie control to help, though mostly such gadgets while more helpful for consistency can hold back the best riders hoping to achieve the best times.

The sprint to 100 mph can’t be achieved in first gear even if you take her right to 13000 rpm so a gear change is required at around 90 mph.

The increasingly popular benchmark from 0-200 km/h is smashed in 7.5 seconds making this more than a decade-old Superbike as fast as a McLaren 720s, though it would probably be pipped to the quarter mile by the McLaren by a few tenths with the 08-11 Honda CBR1000RR managing 10.29 seconds and with a terminal speed of 146 mph.

As for top speed, despite the tiny frontal area and low stock screen the 08-11 CBR1000RR will consistently hit a real 175 mph all day long but if you are committed enough 182 mph is possible.

08-11 Honda CBR1000RR acceleration through the gears