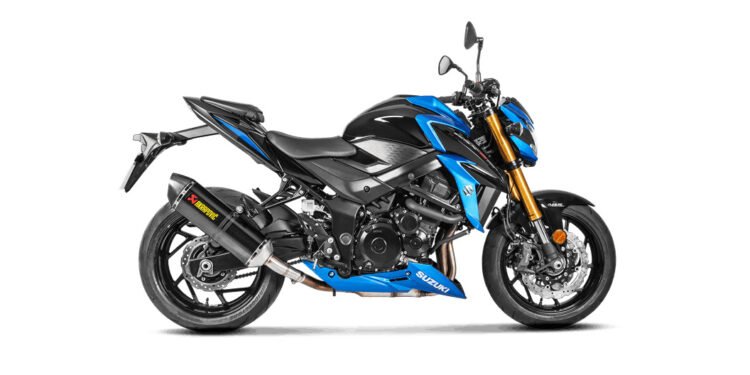 Below, we take a look at Suzuki’s GSX-S750 in-gear and outright acceleration through the gears, along with its top speed. 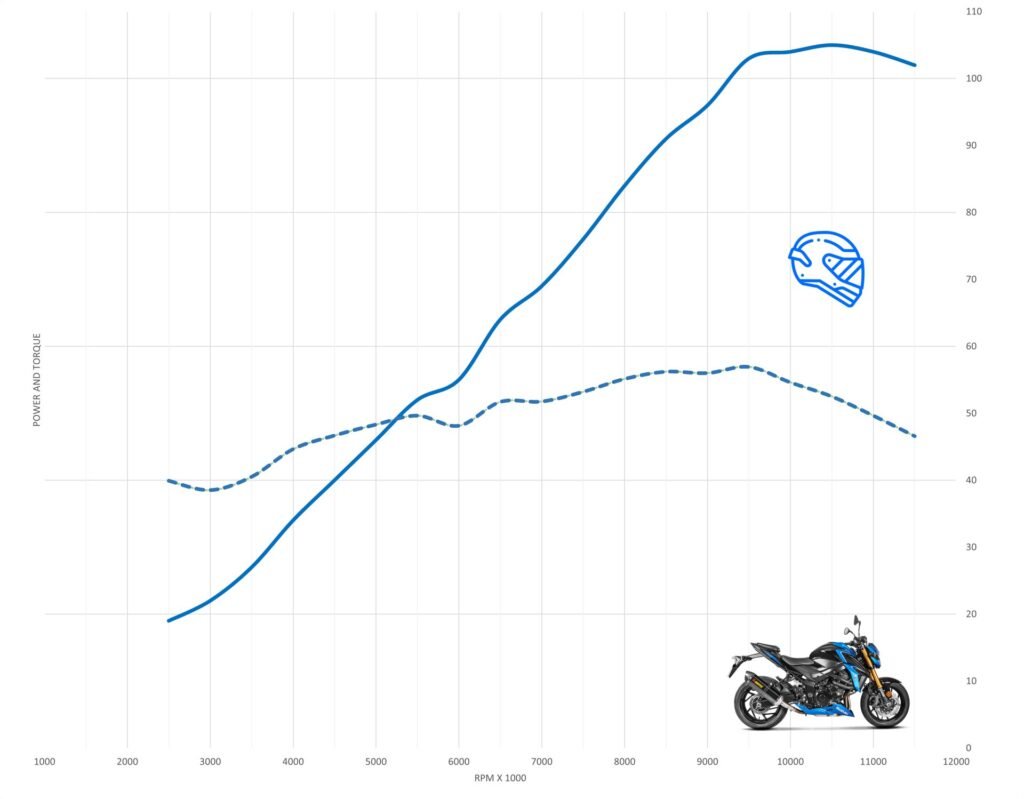 It may sound lackluster if making direct comparisons but that would be missing the point.

Even if the GSX-S is down 30 odd horsepower it’s not all bad as the GSX-S750’s engine is retuned for more bottom and midrange.

Producing torque so high comparative to where peak power is made may suggest a peaky engine but it’s certainly not the case, as from 4000 rpm the GSX-S makes good torque that increases progressively.

This ensures that the engine is willing and encourages you to ask for more rpm while delivering it exactly what you ask as you increase the rpm. 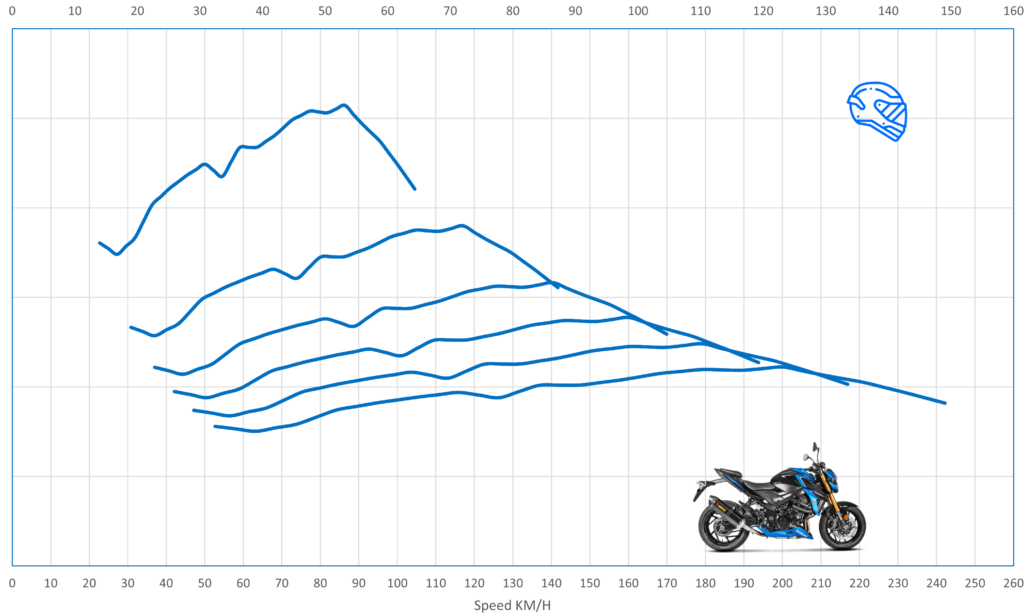 There is a little flat spot at 6000 rpm, but it is barely felt on the road as when you are in it you are quickly out of it.

As mentioned, the GSX-S750 produces more power and torque than the GSX-R750 all the way through the rpm range. It is only at beyond 10000 rpm where the Superbike keeps making more power and thus offers more acceleration.

The GSX-S750 does make more power below 10000 rpm and does run lower gearing so we would expect it to have this in-gear advantage, though the advantage could be wider if it were not for the fact that the GSX-S750 carries a significant weight penalty. 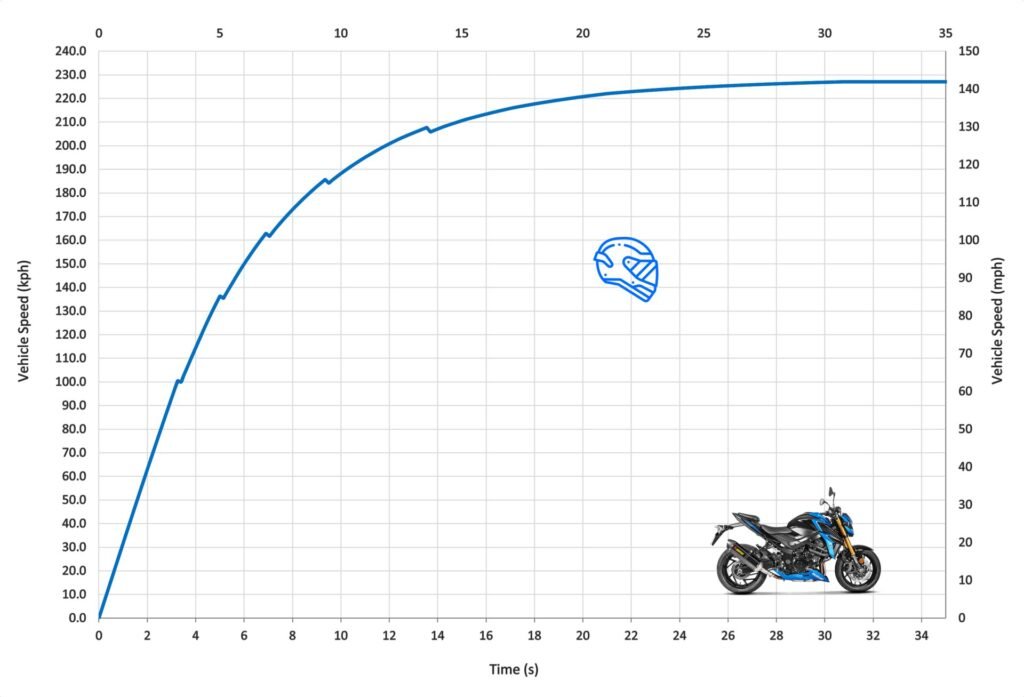 The GSX-S750 is a middle-of-the-pack naked bike and competes with a wide range of motorcycles from 650 to 1000 cc such as the CB650R and the Z900. Its straight-line performance sits somewhere in between which makes sense.

0-60 mph is to be expected from a 100 plus horsepower motorcycle and the GSX-S750’s impressive time of 3.10 seconds is not a surprise.

0-100 km/h chimes in at 3.20 seconds though you must take the motor to 11500 rpm in first gear otherwise if before a change into second will add a few tenths

The GSX-S750 will happily wheelie when launching though is a motorcycle that is relatively straightforward to launch. So good times can be had easier and more consistently than most motorcycles.

Once into second the GSX-S750 settles down nicely but needs 3rd gear to hit 100 mph which the Suzuki GSX-S750 manages in under seven at a spritely 6.76 seconds.

Speaking of the standing quarter mile, the GSX-S750 is an eleven-second bike with a decent time of 11.24 seconds and a terminal speed of 122 mph.

This makes the GSX-S750 about as accelerative as 600s from the late 90s and very early thousands.

The GSX-S750 gets up to 120-130 mph pretty quickly but getting that last 10 mph or so out of her, you will need at least a mile if starting from a stop. But if you must know the GSX-S750’s top speed you will see a very respectable 142 mph which is good for a naked motorcycle making a little of 105 horsepower.

Suzuki GSX-S750 Acceleration through the gears