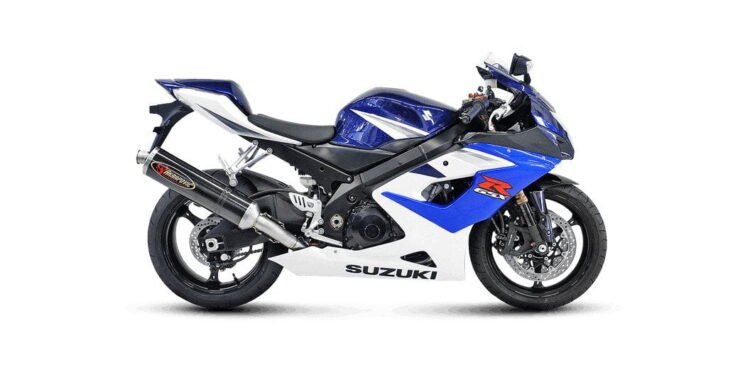 It has been 16 years since we were introduced to the K5 variant of Suzuki’s GSX-R1000.

In terms of looks, the motorcycle has aged relatively well and still looks as purposeful as it did at launch. Back in 2001, the GSX-R1000 was Suzuki’s answer to the Yamaha YZF-R1.

The GSX-R1000 had a monster engine that eclipsed and lead the literbike class in terms of get-up-and-go performance, but it was not as nimble as its rivals of the time.

Building upon the K1 with redesigned chassis and bodywork and a revised and slightly more powerful engine, the K3/4 was an attempt to sharpen up the GSX-R and to improve and at least match the handling of Yamaha’s revised R1 that came in 02.

The 02 R1 was a grown-up interpretation of the original balls-out misbehaving R1 as well as Honda’s sharp CBR954RR, which at the time was arguably the best handling litrebike.

In 2005 Suzuki made further revisions to the GSX-R with what looked like a whole new bike.

Adorned with a new lighter and stiffer chassis and a tweaked engine. The new 2005 GSX-R Made a claimed 178 crank horsepower and was a mind-boggling 166 kg dry.

Handling was even better than ever and now not only could Suzuki claim the strongest engine once again but could also claim to be among the best handling too.

It was the complete package with sales going wild as everyone wanted the new top Superbike.

During this time back in 2005, Yamaha, Kawasaki and Honda all launched new motorcycles just a year prior in 04, but Suzuki still maintained the lead with the best overall performance package at the time 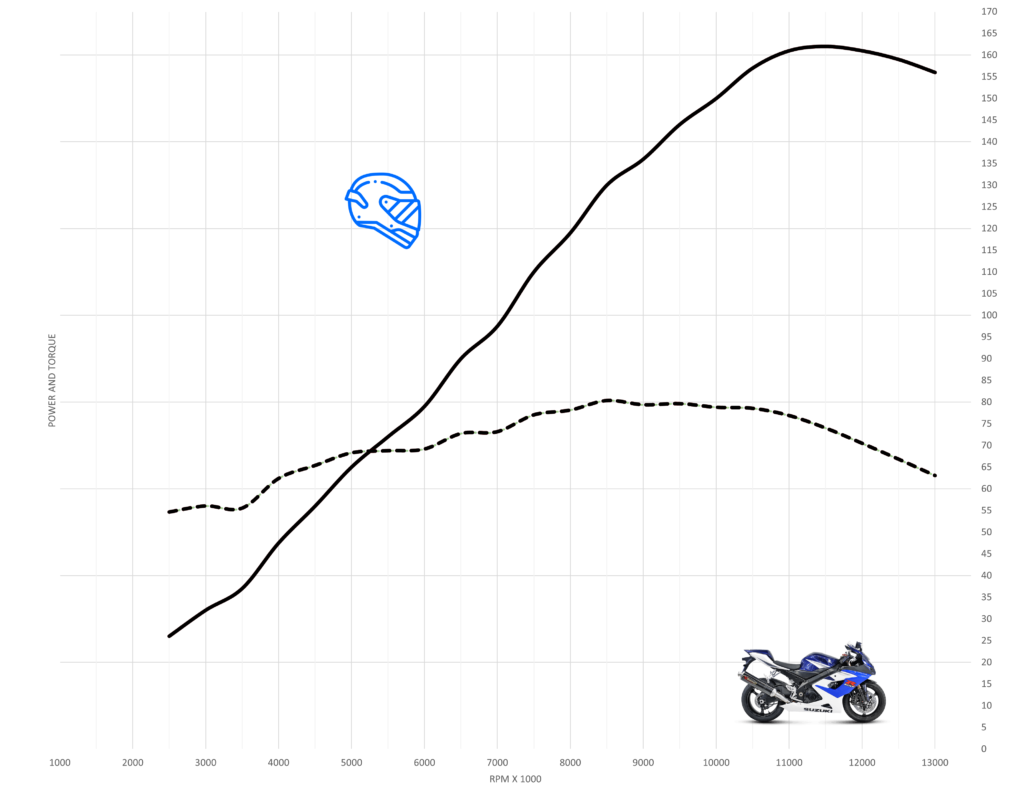 Many motorcycle journalists, as well as owners, or whoever had ridden a K5 GSX-R1000 have been known to claim that the engine is the greatest conventional 1 litre 4-cylinder engine of all time.

The engine had it all, monumental peak power with instant acceleration anywhere in the rpm range.

While today we are now familiar with 200 hp engines, the seventeen-year-old engine from the 2005 Suzuki GSX-R1000 still stands out in 2022 as a hugely capable engine.

Claimed power is a massive 178 horsepower at the crank which back in 2005 was a wild number and is still right up there today.

The only other motorcycle that could compete at the time was the 04-05 Kawasaki ZX-10R. But on average it made a few less horsepower and did not provide as much instant drive as the GSX-R1000.

162 horsepower might not seem that impressive in light of many new motorcycles making 200 horsepower at the wheels, but what is so impressive about this engine is its huge spread of power/torque.

There is great power and torque which arrives from almost tick over and drives all the way to the redline with wicked veracity.

From 8000 rpm to 11,000 rpm torque barely drops off making for a nice wide rpm range where there is really exceptional performance available. 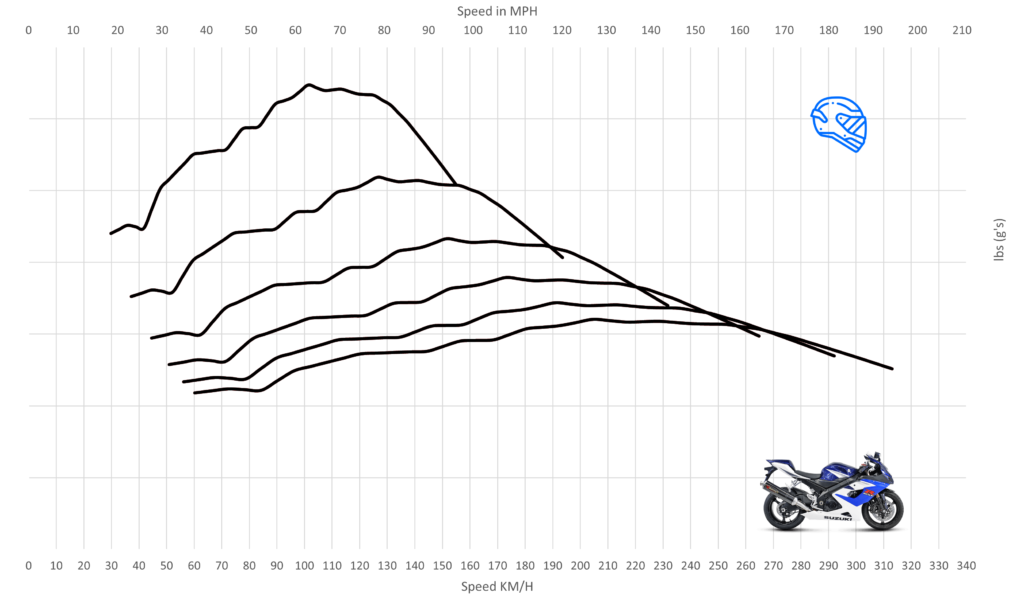 Combining this fantastic engine power and torque delivery with optimum gearing, and an exceptionally low dry weight of 166 kg results in this engine being very explosive.

Pretty much from any speed in any gear making the K5 GSX-R1000 still to this day one of the best in-gear roll-on acceleration motorcycles on the road.

Riding the K5 Suzuki GSX-R1000 below 8000 rpm and comparing it to many modern litre bikes of today, you’d swear that there was nothing faster than the 2005 GSX-R1000 due to its potency.

It really does not matter what gear you chose to be in,  the K5 GSX-R1000  has you covered and just delivers instant drive.

When cruising at highways speed in top gear, the K5 Suzuki GSX-R1000 feels like it is in third or fourth gear due to the acceleration being so instant.

The engine will only lose out to the newer machines generally from 10,000 rpm onward but on the road there are not many situations where you will use that much rpm unless you are racing of course.

On slower roads it’s the same again, gear choice is not hugely important.  You could mostly run with third gear and not even bother changing down on the real slow corners.

Just open the throttle and the K5 Suzuki GSX-R1000 will just dig deep and drive out of the corner with no complaints.

It’s the closest thing to a ballistic missile twist and go.

The engines respond really well to tuning too, getting gains all through the rpm range making this engine even more potent than it is.

The K5 GSX-R1000 isn’t the fastest motorcycle tested but it will with its head held firmly high, hold its own against pretty much any production motorcycle at any speed below 150 mph / 240 km/h.

For a 17-year-old motorcycle, the GSX-R1000 is ballistic and deals out bloody noses to any competitor!

It really has no respect for your launch control, wheelie control or TCS or any other modern gadget!

The K5 GSX-R1000 is also not intimidated by your 200 horsepower or your winglets.

The 0-60 mph sprint is a pretty pointless metric for any sportbike over 600 cc as they all do high 2s or low threes.

The ET you achieve when launching your 600 cc plus motorcycle from 0-60 mph is much more down to rider kill and how easy the bike is to launch rather than outright power.

Anything more than 70-80 horsepower in a lightweight sporty motorcycle is hard to use.

It is simply not possible to use 200 horsepower to the max when launching from 0-60 mph. 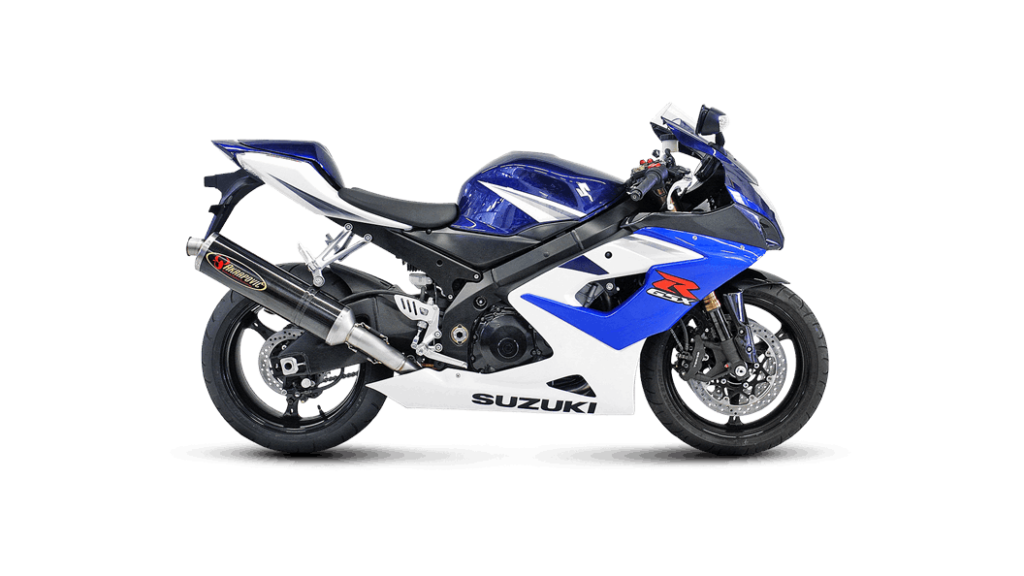 Keeping that in mind the GSX-R1000 has 162 horsepower at the rear wheels and is only 166kg dry making it lighter than most Superbikes of the last twenty years, so launching it will be tricky and will take some skill.

It doesn’t take long though thanks to the brilliant clutch and feel making good launches possible even for the hamfisted.

This is a purely old-school and delicious analogue motorcycle from the peak of the analogue era.

During this era, there were very few if any nanny throttle restrictions. The K% GSX-R1000 also has no traction control or wheelie/launch control to provide manners while launching this weapon from a stop.

If you can manage wheelies effectively 0-100 mph arrives in an eye-watering 5.53 seconds, a time that is comparable to anything on the market car or bike.

0-150 mph and the standing start quarter mile arrive in a little over 10 seconds.

The K5 GSX-R 1000 is capable of sub-tens across the 402m sprint but is hindered by its devastating engine that would rather point to 12 O’clock without many invitations.

The GSX-R1000 does lose out to more modern motorcycles above 150 mph but still records an amazing 0-180 mph in only 21.33 and is only around three odd seconds slower than a Ducati Panigale 1299.

Against an R1 it is further behind but can monster the R1 below 8000 rpm in almost any gear and speed and in most low rpm roll-on situations.

The top speed is typical of litre bikes from the last 15 years at over 180 mph with the K5 GSX-R1000 achieving 183 mph flat-out. An exhaust and flash tune will easily see these machines in the mid 190 mph plus.

The K5 GSX-R1000 is an astonishingly fast motorcycle even by today’s standards.

Often, we remember motorcycles from back in time as being insanely fast, then ride them years later and are left unimpressed but not with the K5 GSX-R1000… It is that good.

A full exhaust system complimented with a tune would bring this motorcycle only a sniff behind some of the later motorcycles predating on the streets. In terms of the engine, you really do not need more than this. 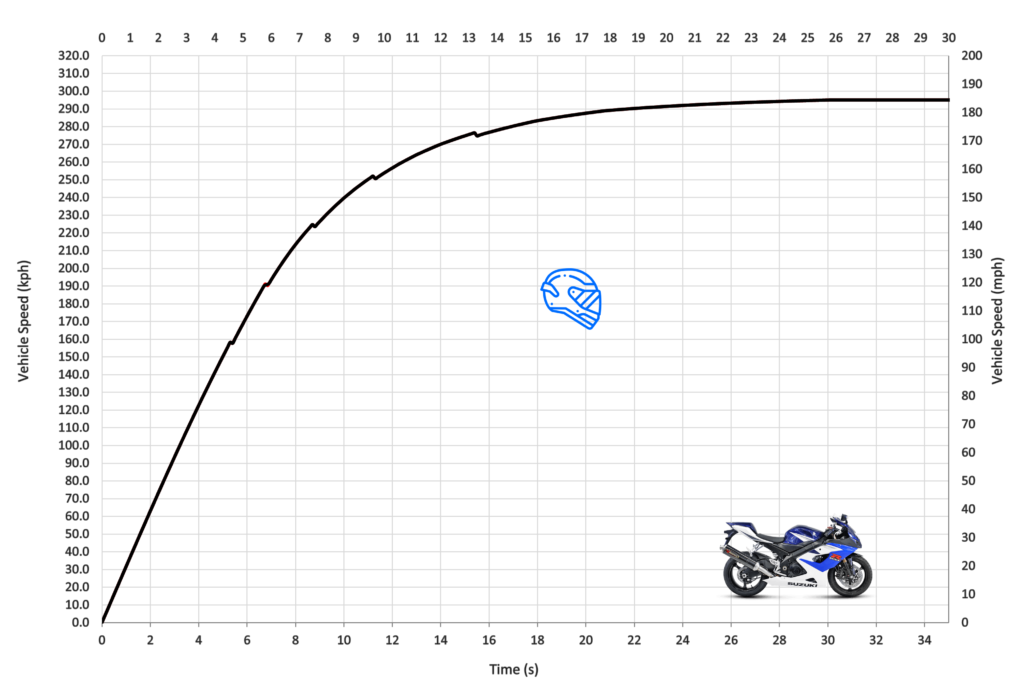 Suzuki GSX-R1000 acceleration through the gears 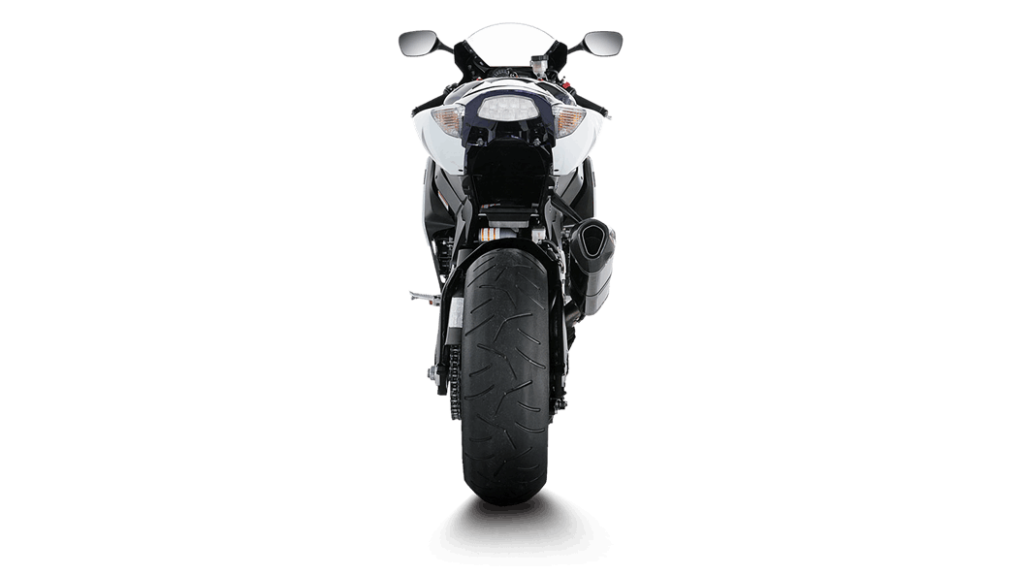